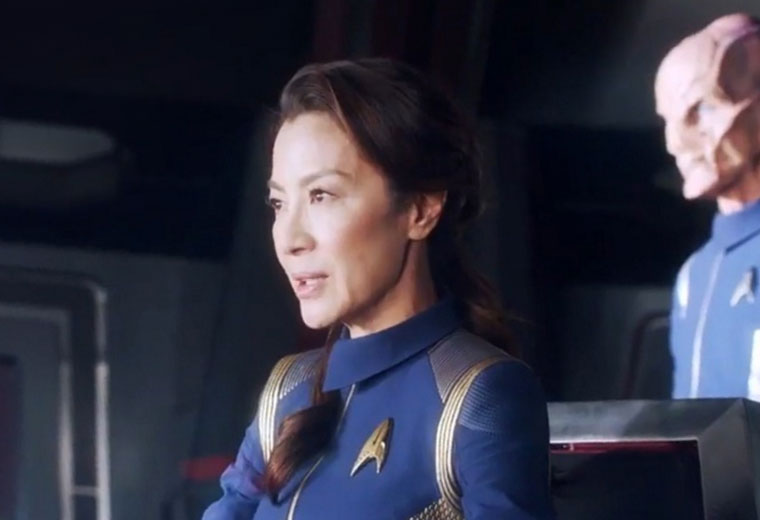 While on their way to the Star Trek: Discovery Toronto set, writers Ted Sullivan and Kirsten Beyer took to Twitter to field fans’ non-spoiler-related questions. While they were careful not to accidentally spill the beans on anything related to Discovery, they did reveal a few interesting aspects of themselves.

Okay — @StarTrekRoom gang is all here. Even #JasonGorn will be taking your questions now! (Look out – he's VERY opinionated & lose lipped) pic.twitter.com/KxFrblTwdy

Actor Sam Witwer, known for his roles in Being Human and several Star Wars video games and TV shows, joined the fun, showing off his Star Trek fandom.

When asked who was a standout actor or actress among the Discovery cast, the pair praised Michelle Yeoh (Captain Georgiou) and Rainn Wilson’s (Henry Mudd) performance, but noted that the entire cast is “a pool of riches.”

Sullivan noted his first encounter with Star Trek, back when he was 8 years old.

First episode I ever saw was City on Edge of Forever. I was 8 & I cried. If taught me abt morality & sacrifice & thinking beyond yourself

The pair refused to answer a question about Discovery merging the 1960’s view of technology with the current view of technology. This references the Discovery trailer and how it shows an advanced and sleek technological aesthetic reminiscent of the J.J. Abrams-era Star Trek films. The pair also refused to answer whether the show will include lesbian, bisexual, or transgender characters, in addition to the already announced casting of Anthony Rapp as a gay lead character.

Well @startrekcbs fans! Looks like we're gonna board now, so thanks for all your questions! See you at the next one! #TorontoHereWeCome

If you like using Twitter and want to keep up to date with Discovery and its cast, some notable accounts to follow are: @jasonsfolly (Jason Isaacs), @rainnwilson (Rainn Wilson), @SonequaMG (Sonequa Martin-Green) @albinokid (Anthony Rapp), @actordougjones (Doug Jones), @MrKenMitchell (Kenneth Michell). The official account for the show is @startrekcbs.