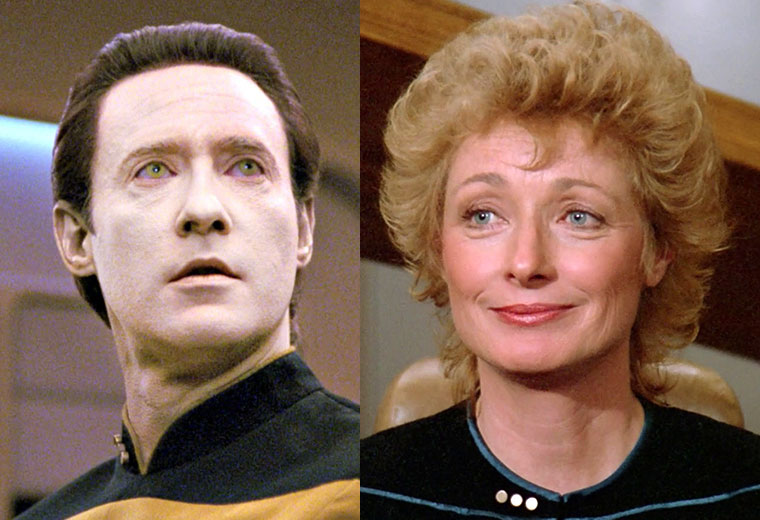 Imagine Gene Roddenberry’s sci-fi universe without its famous Star Trek tech. Can’t? No surprise. Techie toys such as the ship’s computer, tricorders, transporters, hyposprays, androids, communicators, holodecks and phasers are as much a part of the iconic franchise as Kirk and Spock or Picard and Worf. The nifty gadgets dazzle as smart tech. Star Trek characters employ artificial intelligent devices in all missions and their personal daily use. 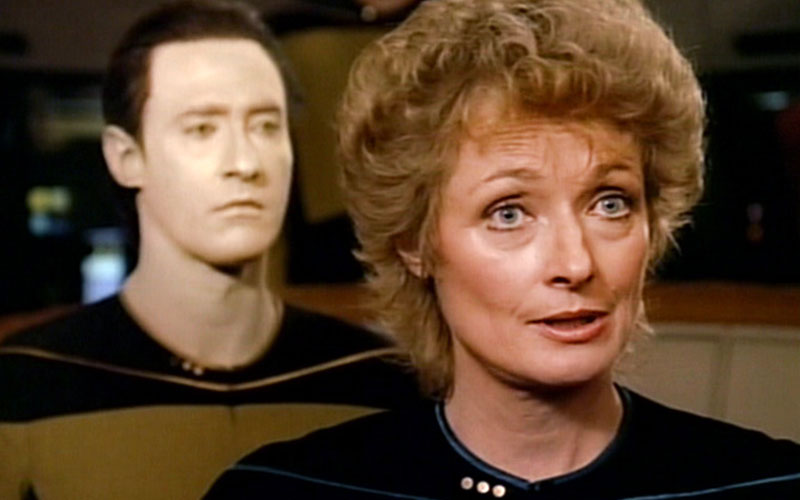 It’s been over 50 years since creator Gene Roddenberry’s original starship of the imagination launched, and that half century mark means the world’s changed as much as the fashion sense of Lt. Uhura’s mini skirts. We’re close to living authentic sci-fi lives. Artificial intelligence – at least a semblance – now engages us regularly. No matter how low tech you try to live, you probably utilize a basic aspect of A.I. You’re reading this on a high tech device, or maybe even listening to it read aloud by a text to speech program. True A.I. has yet to be fully achieved, still, smart technology serves us.

You use an iPhone or Android for weather forecasts, scheduling, shopping and more. Do you own an Amazon Echo? I use my Alexa daily for alarms, playing music, fact checking and a lot more. I’ve only owned the Amazon Alexa for six months, but it’s hard to imagine life without her daily digital assistance.

Although present day devices aren’t as sophisticated as a 24th century computer or sentient android Data, they’re basic, albeit primitive A.I. Ensign Sonya Gomez says to Geordi Laforge in the second season Borg introduction, ‘Q-Who’, after he’s surprised to hear her say please to a replicator, “Since it is enlisted as intelligent circuitry, why not? After all, working with so much artificial intelligence can be dehumanising, right? So why not combat that tendency with a little, simple courtesy?” 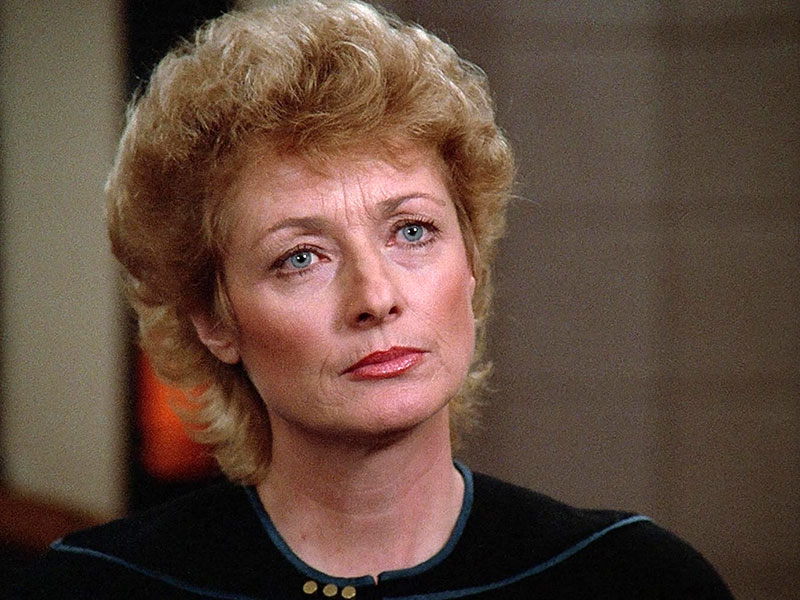 Sonya Gomez would look at our ‘intelligent circuitry’ and call it primitive. Sorry Sonya, but I find it pretty impressive. And like you, I even find myself thanking tech, such as my Amazon Alexa after she’s been particularly helpful or entertained me with a corny joke – her Star Trek and Star Wars jokes are so delightfully bad they’re good.

Thanking tech isn’t necessary, of course, but it just feels right. It feels polite. Though our present day most advanced device still isn’t artificial intelligence, often, these gadgets do appear to comprehend. Perhaps such slick illusion is enough to elicit our very human response at civility and giving praise.

But what of sharing your living and work space with a sentient computer; interacting daily on important matters, even life or death decisions, with an android? Not only would you work alongside a miraculous machine, but in many instances, it would give you orders to follow. Can you handle being ordered around by tech? It’s precisely what Dr. Katherine Pulaski (Diana Muldaur) had to deal with when she butted her human head up against Lt. Commander Data’s positronic one.

Data was familiar to viewers when Kate Pulaski replaced Beverly Crusher as Chief Medical Officer serving under Picard. After Dr. Pulaski doubted Data’s competency, many couldn’t help but root for their synthetic friend. “Ol Yellow Eyes” had proven himself as trusted companion for a full season. Here comes a replacement for Crusher – another friend – and she dares question the legitimacy of our favorite artificial intelligent agent.

Poor Pulaski. No wonder she was never a fan fave. The fan deck was stacked against her right from the start.

In 2nd season’s “Elementary, Dear Data”, Pulaski puts her doubts on Data’s smarts to a test. Perhaps no other TNG episode so clearly and entertainingly defines the Data Pulaski debate over the Noonien Soong created android’s supposed intelligence. The tale’s beauty is how it goes beyond measuring Data’s intellectual gifts – or lack thereof. It ultimately becomes a metaphysical exploration of how artificial intelligence may interact with us and other forms of A.I. with humanity witness to a clash of synthetic smarts: here, android versus sentient hologram. 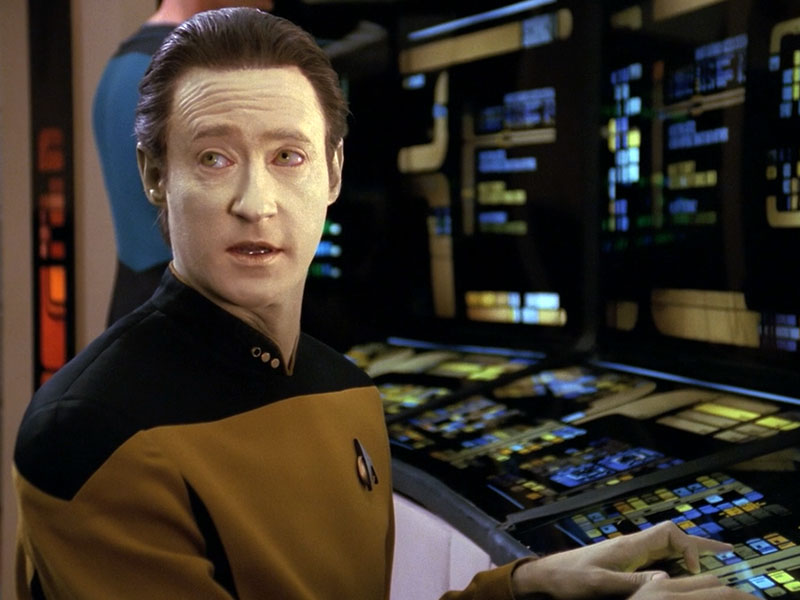 After Geordi and Data cosplay as Watson and Sherlock Holmes respectively, they hit Ten Forward to discuss the anticlimactic time. Geordi isn’t feeling it. He’s not having fun. He’s pissed. It seems Data’s flawless recollection of the iconic character’s forays into crime busting hampers the spontaneity of LaForge’s merriment. Sitting nearby, Dr. Pulaski overhears them, she interjects; no matter the android’s reported deductive logic, he merely uses memorization of every Sherlock Holmes’ tale to solve holodeck jaunts.

Geordi accuses Pulaski of being unfair when she says he’s wasting time trying to have spontaneous fun with Data cosplaying Sherlock Holmes. Pulaski counters, “Your artificial friend doesn’t have a prayer of solving a Holmes mystery he hasn’t read.”

The three visit the holodeck for a Holmes like adventure, and computer concocts a story, one not written by Sir Arthur Conan Doyle. While in the thick of the game, Pulaski accuses Data of fraud when he so quickly and neatly solves the mystery, “I’ll give you credit for your vast knowledge, but your circuits would short out if you were confronted with a truly original mystery.”

Things get interesting when Geordi has the computer summon an opponent with strategy enough to defeat his droid pal. Infused with a sizable amount of ship’s power, computer carries out his order. Soon, infamous Holmes foe Moriarty appears, possessing – somehow – as much artificial smarts and deductive mojo as Data. When Pulaski’s kidnapped by the newly born digital bad ass, Captain Picard gets into the act. He negotiates her release by telling Moriarty he’ll save his program – perhaps they’ll be able to liberate him into the real world at a later time.

In an example of ‘be careful what you wish for’, Pulaski challenges an android to a battle of wits doubting he ever possessed them, and she gets a surprise. She encounters a synthetic enemy who’s the android’s intellectual equal, even a match or more for herself. Pulaski hoped to see Data defeated by a greater intelligence. She figured it would be her human brain. Ironically, she tangles with a far more cunning machine and is even put into jeopardy by the calculating entity.

All those rooting for A.I. ascendance – or loving ‘cute’ droids such as R2D2 or C3PO in Star Wars – may find the A.I. reality far more sobering than cosplaying with droids or delighting at silly banter between bickering machines. The fact is over the next few decades, our world will most likely be tremendously reshaped by the use of A.I. How we work, play, shop and even love will be greatly changed by synthetic intelligence. It’s exciting to contemplate this future. It should offer many benefits, however, we may encounter a scheming Moriarity or Agent Smith of The Matrix to complicate things.

Pulaski’s dilemma may be a possible future for all of us. Will we judge A.I. by our human intelligence measure, or will each successive generation of machine smarts be a gauging yardstick to surpass even our most sophisticated expectations? A.I. may mimic Moriarty – eager to play with a Data analogue in order to defeat its synthetic predecessor. Will we get caught in the middle and pick up the shattered pieces as did Captain Picard? 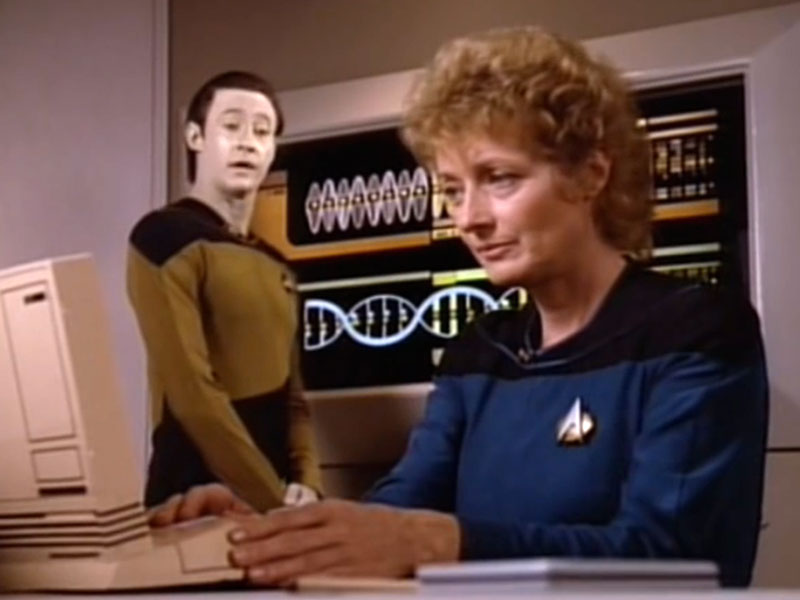 The complex debate over artificial intelligence becoming truly intelligent won’t be settled anytime soon. But the journey of its discovery remains fascinating, and Data and Pulaski dramatize our hopes and fears about the quest. In the end, I only hope we have a holodeck ala Star Trek: The Next Generation to test out possible scenarios. That way whatever happens during playing our intelligence games/simulations, we can always save the program and walk away. And if things really go awry, simply delete it.