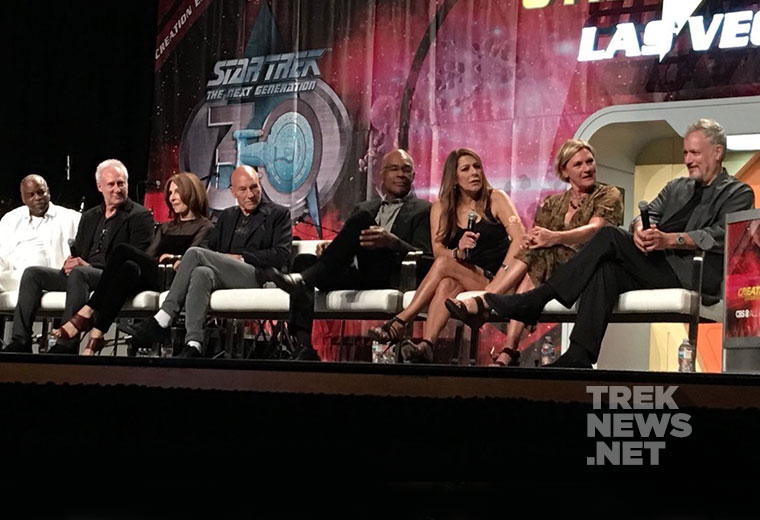 Thirty years after Star Trek‘s second television series began, the majority of the cast delighted Star Trek Las Vegas convention attendees with funny stories and jokes during a 30th-anniversary celebration of Star Trek: The Next Generation.

The cast turned down having a moderator for the panel. Despite a handful of boos from the audience, Marina Sirtis, who played Counselor Troi, decided that instead of panel members talking about what they had been up to recently, they would answer audience questions. She even jokingly took to the moderator’s desk for a few minutes to start running the panel. 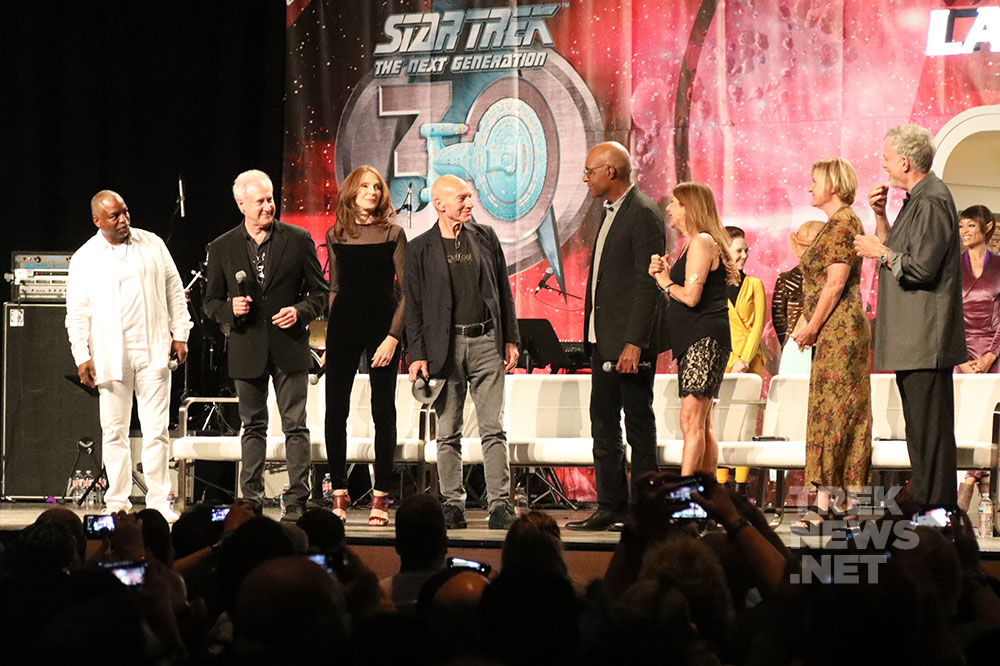 The cast of Star Trek: The Next Generation at STLV (photo credit: Neil Henderson for TrekNews.net)

After 30 years of knowing each other and being friends off screen, Sirtis, Gates McFadden, Denise Crosby, John de Lancie, Patrick Stewart, LeVar Burton, Michael Dorn and Brent Spiner are like a well-rehearsed comedy team.

When asked how the show dealt with people with disabilities and whether that was deliberate, Burton said he asked show creator Gene Roddenberry if they wouldn’t have overcome disabilities by the 24th century. He said Roddenberry would always reply, “How do you know what you have isn’t better?”

Spiner then jumped onto that to add that he asked Roddenberry if by the 24th century they wouldn’t have skin tones for androids.

“What makes you think that what you have isn’t better?” Roddenberry replied. “He said that about everything.”

Stewart then said he asked Roddenberry if by the 24th century we wouldn’t have overcome male pattern baldness.

“In the 24th century, no one will care,” Roddenberry replied.
The panel members insulted each other from time to time, but you could see how fond they are of one another and that it was all in good fun.

When Stewart talked briefly about the captain having a romantic relationship in the episode “Captain’s Holiday,” several women whistled and called for Stewart to take his shirt off. Sirtis took the opportunity to dig in.

“Don’t encourage him. He’ll use any excuse to take his shirt off,” she said. “He’s very old, but he’s in great shape.”

The panel members jokingly declined to answer a question about the upcoming series, Star Trek Discovery, but Spiner did take the opportunity to wish the new cast members luck.

“I hope it continues this wonderful journey Star Trek has been on,” he said.

Stewart then asked what time period Discovery is set in, in relation to TNG.

“You would have to have hair,” McFadden joked.

Possibly the loudest applause came when an audience member asked if de Lancie could have any of Q’s powers in real life, who he would pop in and irritate.

Spiner was then congratulated on his work and performance as Data, and he was asked how he found that in himself.

“Thanks for saying we’re cool,” he joked. “I can’t speak for everyone else, but I am.”

Spiner said that filming episodes were like “a moving train.
“We barely had time to think about it. You just let your instincts kick in and go with it,” he said. “It was more luck than talent and you just hoped that something stuck.”

“We could talk all night about how hard we worked on the show,” Stewart said. “Each character quickly became a blend of the characters and the actors.

“I quickly got to a point where I didn’t know where Patrick Stewart ended and Jean Luc Picard began.” 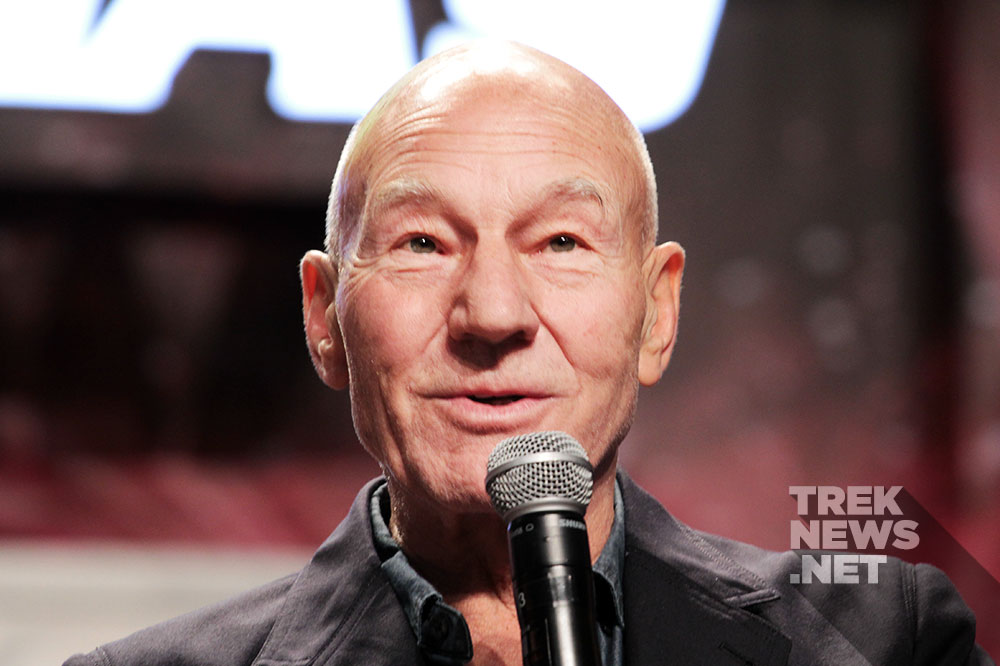 “They never wanted me to be me,” Sirtis then joked. “The ‘First Contact’ Bar scene, that was me.”

Crosby was then asked what would have happened to Tasha Yar if she had stayed on the series.

“Data and I would have gotten married and had a little child,” she replied to much laughter.

Dorn was then asked about the differences between being on the TNG and DS9 sets.

“It was difficult to work and not have fun,” he said of his first episodes on DS9. “I missed that fun part and I really wanted that. After about six months, they loosened up. They were all great people but we did not have that feeling on the set.”

Stewart was asked about his pit bull Ginger, a rescue foster dog that he fell in love with recently but had to part with. Their relationship was followed with great interest on social media.

“Ginger is well and thriving. She doesn’t live with us sadly. We couldn’t bring her in the UK,” he said to groans.

Breed specific legislation does not allow people to bring pit bulls into the country, but he is campaigning to change that, he said.
“There are no bad dogs, only bad owners,” Sirtis then added to applause.

Sirtis got big laughs when she talked about Stewart directing an episode.

“Patrick called the Screen Actors Guild about smoke on the set to ask about rules and regulations about working in smoke,” she said. “Then he got to direct. We couldn’t see our hands in front of our faces, there was so much smoke on the bloody set.” 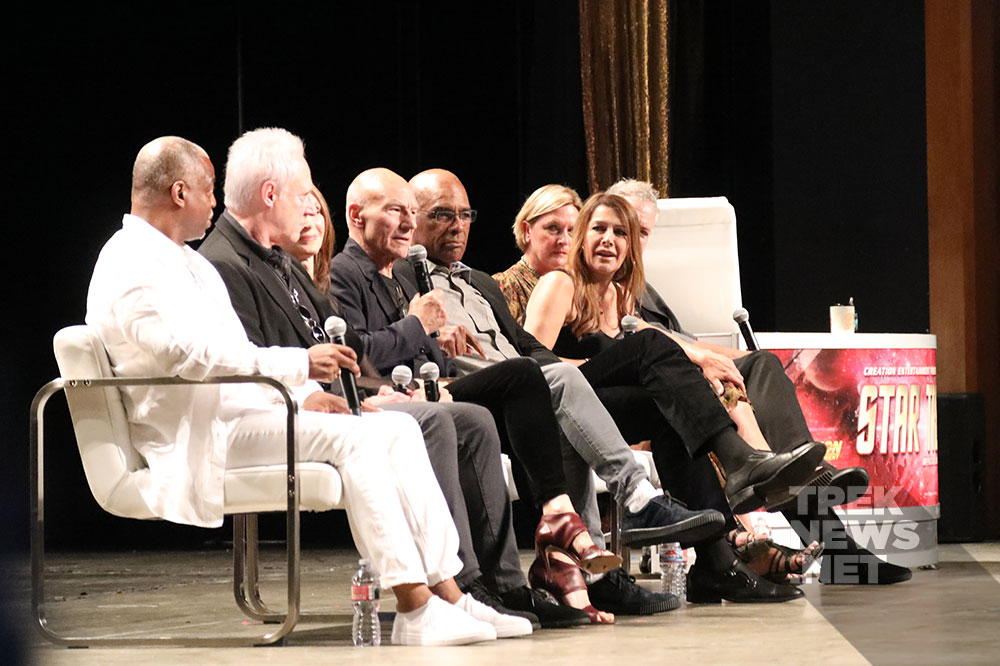 The cast of Star Trek: The Next Generation at STLV (photo credit: Neil Henderson for TrekNews.net)

Stewart added that someone complained that day because they thought the set was on fire.

Several panel members chimed in when they were asked if they had any advice for the stars of Star Trek: Discovery.

“Save your money,” Sirtis said.

“Stay out of Gucci,” Sirtis added to laughter.

“You need to really appreciate who you are and what’s happening because you’re extremely fortunate,” Dorn said.

“Enjoy it while you can,” McFadden added.

One audience member reminded Stewart of when he was named sexiest man alive in 1992 and then most bodacious man alive in 1993. He had previously said that was absurd, and she asked him what made him think that.

“It still feels absurd,” he said.

When she showed him a photo that she had brought, Burton jokingly said, “That’s as bodacious as it gets.”

The conversation then took a more serious turn when one fan asked about how the panel members would proceed to get to Roddenberry’s vision of the future.

“The only thing that comes to mind is to take the love and the passion for the ideals Gene gave us and put them into practice in our everyday lives, and pass them on to our children,” Burton said. “In the face of contrary evidence, I still want to bet on the human beings.”

McFadden said that people need to focus on what they can do instead of what everybody else is doing.

The panel members told stories, such as about things that various cast members tried to take home or did take home when they weren’t supposed to. There was also much laughter onstage and in the audience about actors cracking up on the set and joking around when filming was going on.

Sirtis took a few minutes to talk about inequality between men and women in Hollywood and elsewhere, including the difference between pay for men and women.

“It’s an inequity that needs to be corrected,” Stewart said.
The celebration took a downturn after an audience member asked more than one question about advice to give to upcoming actors and what their responsibilities are to people who are watching.

De Lancie said actors need to be more concerned about the craft of acting, working on their craft and learning it, then they are about celebrity.

Sirtis and McFadden then had a disagreement about how young people work, or not, in the field. After they traded barbs back and forth, both women tried to turn the conversation back to positive ground.

“When we were Shooting Star Trek, we had no idea we were going to affect people’s lives. Seriously, this blows our minds,” she said while gesturing to the approximately 6,000 people in the audience. “We just tried to hit our marks, and remember our lines and not bump into the furniture.”

Stewart, ever the captain and diplomat, then apologized to the audience for possibly disappointing them regarding how they answered questions.

“But we laughed and we had a good time,” he added of the hour-and-a-half-long talk.

Indeed, Sir Patrick, we did.

The TrekNews.net team is in Las Vegas to cover this year’s convention. As we have in years past, we’ll cover all the breaking news and provide exclusive photos from STLV on TrekNews.net. We’ll also be live-tweeting throughout the event. To stay up-to-date, follow @TrekNewsnet on Twitter, TrekNews on Facebook, @TrekNews on Instagram and TrekNewsnet on YouTube. 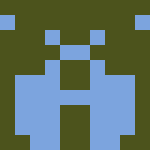 Kat Merrill is a freelance writer and editor who watches Star Trek every evening with her German Shepherd. She writes when she feels she has something important to say, on her blog at <a href="katsuniverse.com" katsuniverse.com .