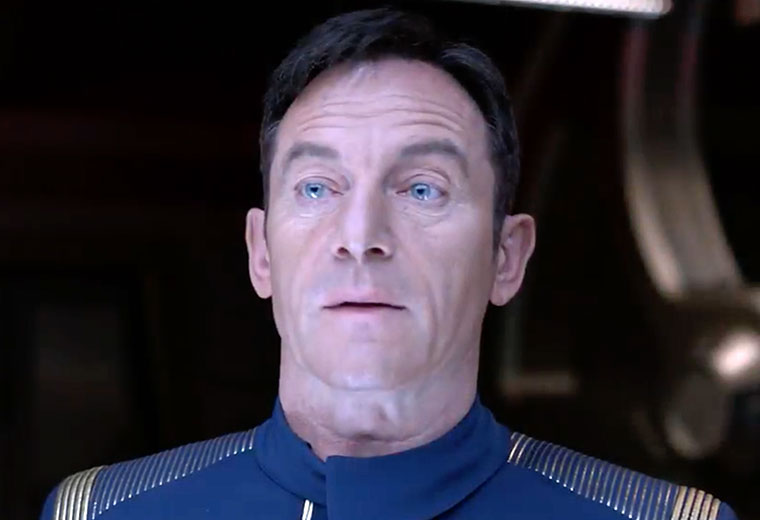 Star Trek: Discovery star Jason Isaacs temporarily landed himself in murky water when the actor offered some candid thoughts on Discovery and what it means for established Star Trek legacy.

In the New York Daily News gossip section, Isaacs is quoted as saying he was “looking forward to having the fun of them [the fans] being outraged” because Discovery is so different from previous Star Trek. He also noted how his show is “Star Trek, but not as we know it,” which is largely against what others involved in Discovery both on and off camera have said.

Perhaps most controversial of all, Isaacs asserted that the Discovery would “throw away” the legacy of William Shatner and Patrick Stewart, although this statement appeared in the article without attribution. This was enough to warrant a tweet from Shatner himself.

When asked for clarification, Isaacs denied having said anything about throwing away anyone’s legacy, and he even dared those who say they will never watch Discovery to stay away from it.

That said, for the few idiots offended enough to tell me
1) to go fuck myself and
2) they'll never watch
1) I'm my top choice
2) I dare you

So ends a quick but potentially disastrous PR nightmare for Isaacs and his show, but this little issue serves as a reminder for how careful Discovery‘s actors have to be about selling Star Trek in 2017. As we noted in a recent editorial, Star Trek is on thin ice now. Even relatively innocent but off-the-cuff comments like what Isaacs assumingly said to the Daily News is a slippery slope.

It’s perfectly fine to say that Discovery will be different than the Star Trek we know and love (to an extent), but pushing that argument too far is a quick way to alienate fans. So far, the team behind Discovery has done a respectable job of promoting the show and its place in the Star Trek franchise; they’ve made sure to cement the show’s modernity with classic Trek in a way that sells to both newcomers and fans. This Daily News example should serve as a lesson to pick your words carefully, especially when talking about an issue as sensitive as a new Star Trek.

And another lesson: maybe don’t talk to the Daily News gossip section in the first place.