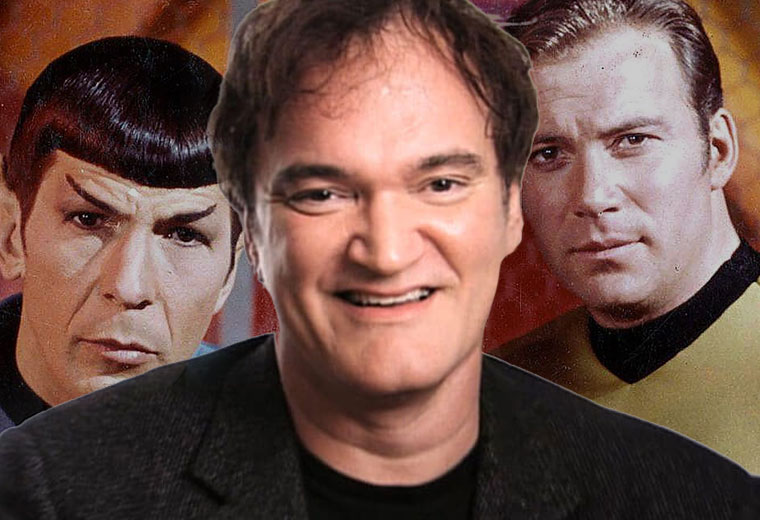 Imagine, a parallel dimension full of rare, exotic pleasure. For one shining moment, let us perchance to dream a little dream… Captain Kirk rampaging around as a bloodthirsty assassin eating Royales with cheese. Spock, an enigmatic Vulcan martial arts guru, schooling Starfleet Academy cadets on the most lethal way to deliver Viper Clan death blows. A skant clad, temptress Deanna Troi dancing a 24th century Twist with a besotted Cmdr. Will Riker. It could happen, if celebrated film writer/director Quentin Tarantino was given free reign to tackle one of his beloved pop culture icons – Star Trek.

Scotty! Beam me the hell out of here!

On an episode of the Nerdist podcast that recently resurfaced, The Hateful Eight director spoke fondly on the narrative heft of Gene Roddenberry‘s original series – especially praising William Shatner’s James T. Kirk – the first, and still for so many, the only true Captain Kirk in any galaxy.

When asked what kind of story he’d want to tell if given the chance to helm a Star Wars film, Tarantino said:

“The actual answer to the question is that I would be more inclined to direct a Star Trek… rather than Star Wars.”

On what he’d do with a Star Trek movie:

“I’m definitely a fan of the original series… in particular a fan of William Shatner’s. That’s my key into the series – William Shatner.” said Tarantino, creator of Kill Bill, Django Unchained, Pulp Fiction and Jackie Brown.

Tarantino goes on to say though he liked J.J. Abrams’ first big Star Trek film from 2009, the second installment, Star Trek: Into Darkness didn’t thrill him. Specifically, he was bothered by the casting of Benedict Cumberbatch. “It really bothered me that [he] was playing Khan. It really bothered me. And part of the reason that it bothered me was like – well, wait a minute, that just doesn’t work… The thing that I liked about the first one is that Chris Pine is playing William Shatner and Zachary Quinto is playing Leonard Nimoy as Spock… so, Benedict Cumberbum can’t be Khan.”

Tarantino praises writer Harlan Ellison and his Original Series entry, “City On The Edge Of Forever” and also Star Trek: The Next Generation. In particular, he loves TNG’s time-tripping episode, “Yesterday’s Enterprise,” and he could definitely see the popular time-travel tale as a springboard for a big feature film.

What do you think a Tarantino-helmed Star Trek film would look like? Tell us in the comments section below.