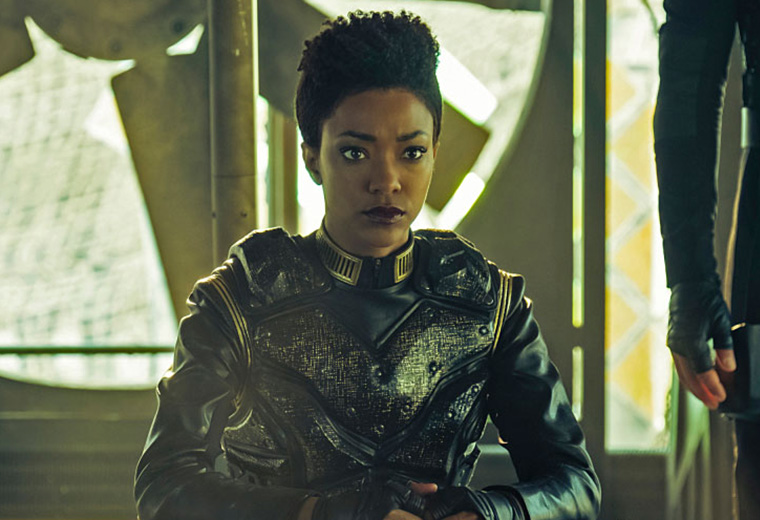 After last week’s fantastic episode, “The Wolf Inside” had a lot to live up to. While I wouldn’t say it surpassed “Despite Yourself,” Star Trek: Discovery‘s eleventh episode does a great job in its own right. 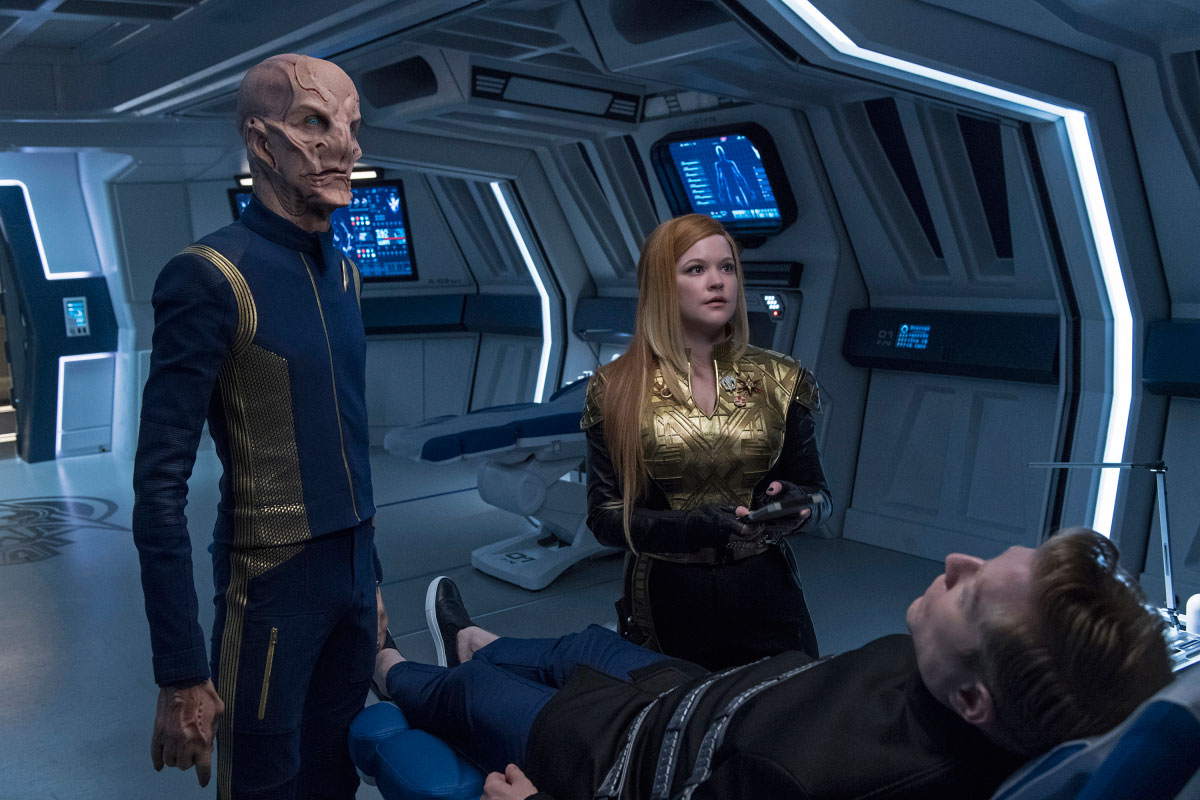 Let’s get this out of the way right off the top: the worst kept secret about this new show was confirmed this week: Tyler is, in fact, Voq. After L’Rell began the wake-up call last week, seeing himself — or, rather, his mirror counterpart — finished the job. The scene in aboard the Shenzhou where Burnham confronts Tyler about it is one of the series’ best. Both actors are on top of their game and the moment where Tyler finishes his turn is simultaneously wonderful and horrifying. Even though it was expected, particularly after last week, the payoff was definitely worth waiting for.

Other than that, the episode feels like a bridge to next week’s showdown between Burnham and Empress Georgiou (another easy guess after last week’s episode). That’s not to say it’s bad, though. It does everything it needs to exceptionally well, and there’s some great universe-expanding elements contained within. 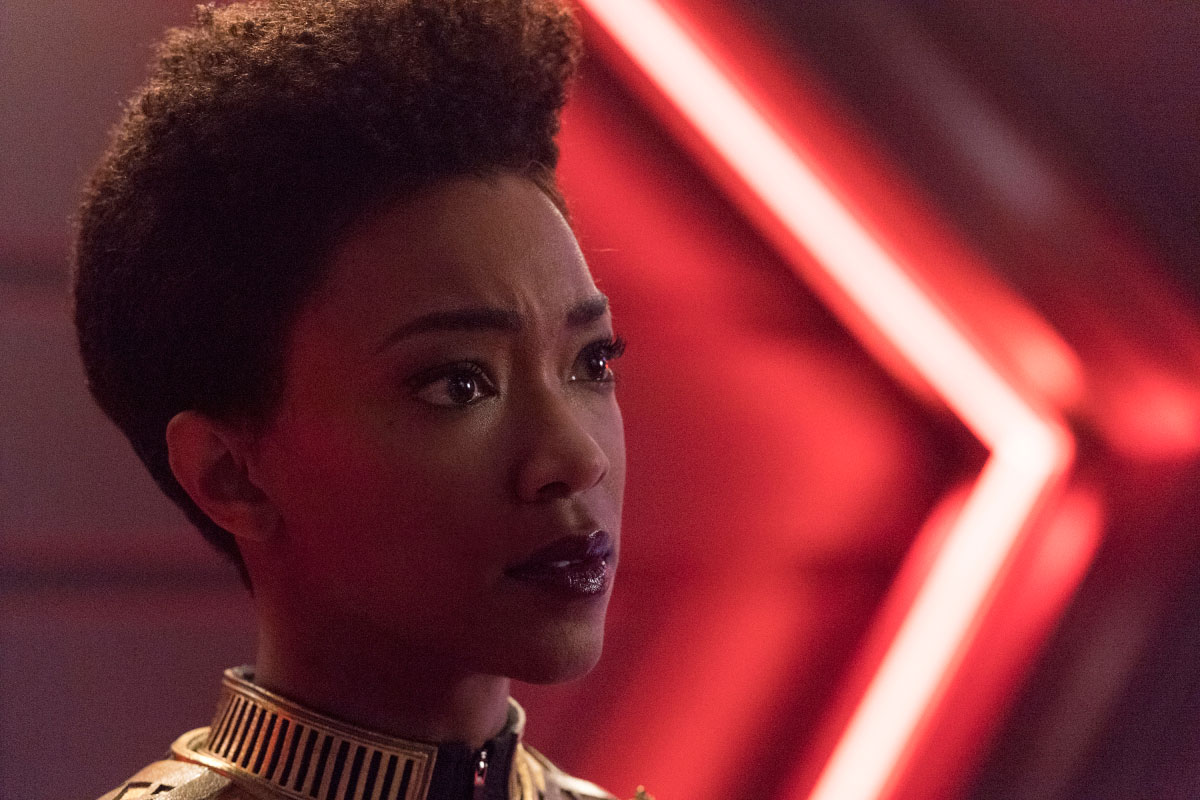 After obtaining the files about the Defiant last week, Burnham now needs a way get them back to Discovery without blowing her cover. Meanwhile, she gets an order direct from the Emperor via another captain to go to a hidden rebel base and destroy it because it houses a particular rebel called the “Fire Wolf,” a.k.a. the Klingon leader of the resistance.

When they get there, Burnham and Tyler beam down and encounter the rebels, which gives us our first look of Discovery‘s Andorians and Tellarites. Like the Klingons, both species get redesigns for the new show. The changes to these species are more subtle than those done to the Klingons and, while I prefer the Andorians and Tellarites from Enterprise because of their simplicity, I feel that their new looks will grow on me in a way that the new Klingons haven’t yet. 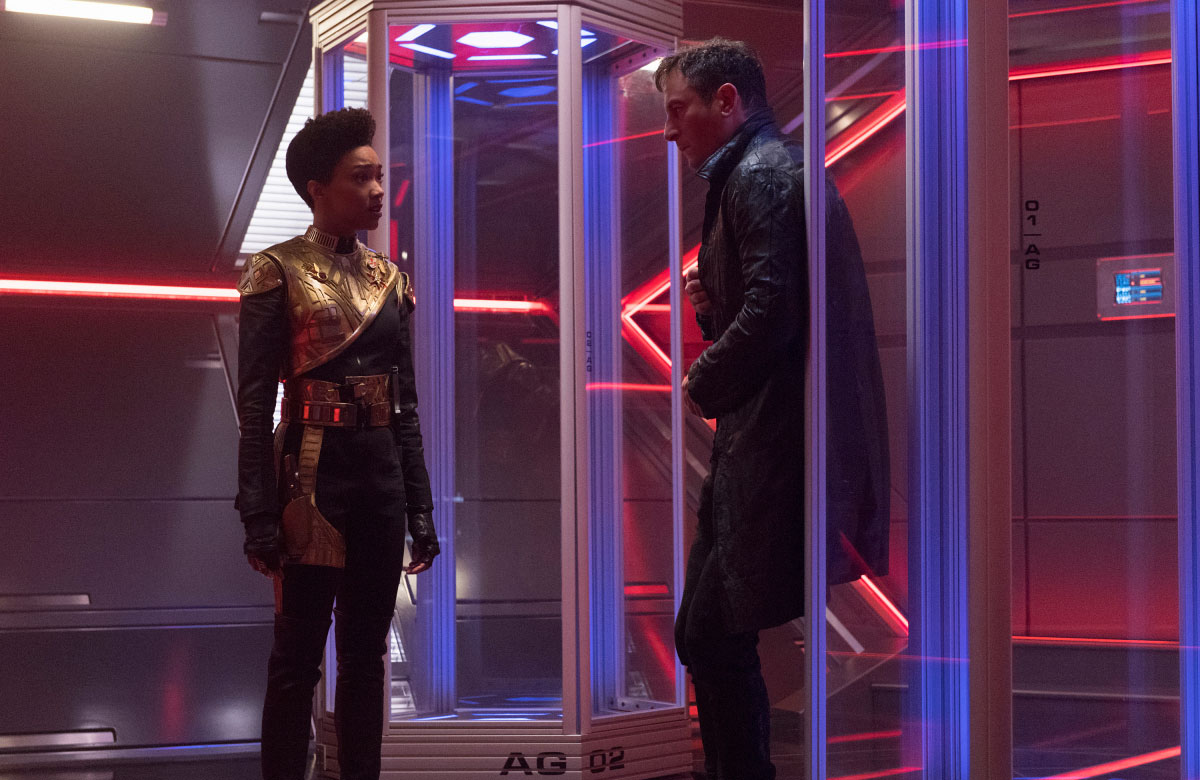 Burnham and Tyler surrender to the rebel group and are brought to the Fire Wolf, who is Voq. Burnham is impressed by how these four very different species — the aforementioned three plus the Vulcans — can work together. She tries to broker a peace, but Voq makes her undergo a mind-meld from mirror Sarek, who also sports a goatee like Spock and Soval before him. The meld revels much of Burnham’s past, and while its unclear if Sarek knows she’s not that universe’s Burnham or he just read the emotions of those moments, he vouches for her. 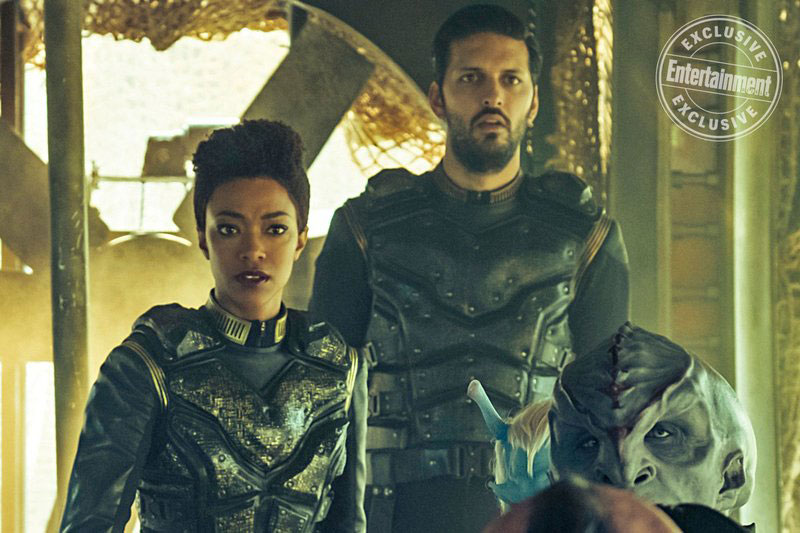 Tyler, however, starts remembering more of his past when, essentially, being faced with himself and attacks Voq. Voq handles him very easily and, after assurances from Sarek that Tyler was acting alone, Voq gives Burnham info she needs to help her cover their escape from the planet.

Back aboard the Shenzhoum, Tyler’s turn happens, and he almost kills Burnham if it weren’t for a save from Mirror Saru, who is Burnham’s personal slave in this universe. With Detmer’s encouragement, Burnham orders Tyler to be executed via transporter spacing, but not before she can put a plan in motion. Burnham hides the Defiant intel in one of Tyler’s holsters before beaming him out into space. He’s there for just a few seconds when he is beamed aboard the Discovery where, after he recovers the intel, Saru treats Tyler with a trip to the brig.

The B-plot for this episode involves Tilly and Saru trying to heal Stamets. Tilly is convinced that the only way heal him is to use the spores, but it doesn’t go so well. He flat-lines, leaving Tilly to mourn. For reasons that only make sense for the plot, they leave Stamets in the spore chamber presumable well after he is pronounced dead, where Tilly sees him come back to life. We then see inside Stamets’ head, where he encounters the mirror version of himself.

The episode ends with an appearance by the Empress, and in just a few moments, Michelle Yeoh totally owns playing the mirror version of her character. It’ll be fun to see her next week go toe to toe with Burnham once again.

What do you think of the latest episode if Discovery? Let us know in the comments below.