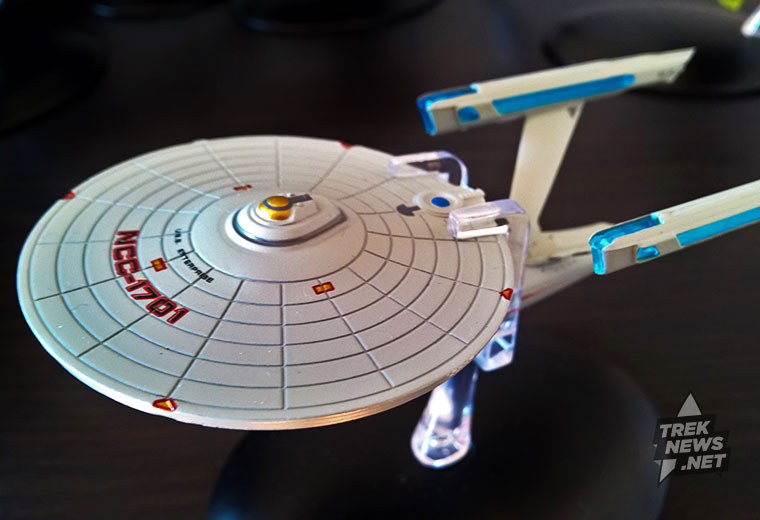 If you have your ear to the ground on the latest Star Trek merchandise, you’ve probably heard of Eaglemoss’ collection of Star Trek die-cast ship models. Perhaps you’ve been hesitant to buy into the collection because of its price, or because you don’t think you need a bunch of metal hanging around your house. Well, we got our hands on a few models from Eaglemoss’ impressively varied collection; if you have any questions about these models, let us put them to rest.

Eaglemoss current has three lines of models in production. One is their most famous line, the Star Trek Starship Collection, a series of “regular sized” ships from all corners of the Star Trek universe. These models are about 5.5 inches long, and like all Eaglemoss models, are made of die-cast metal and are hand-painted. The second line is a bigger version of some of the models in the regular collection. These XL models are about 10+ inches long, and made of the same materials. Finally, the most recent line is from Star Trek: Discovery. Currently, only the U.S.S. Shenzhou is available, but the Discovery herself is on the way in April.

Our first collection review will touch on the “regular” models, of which there is the best variety for customers. TrekNews was able to procure six of these models thanks to Eaglemoss: 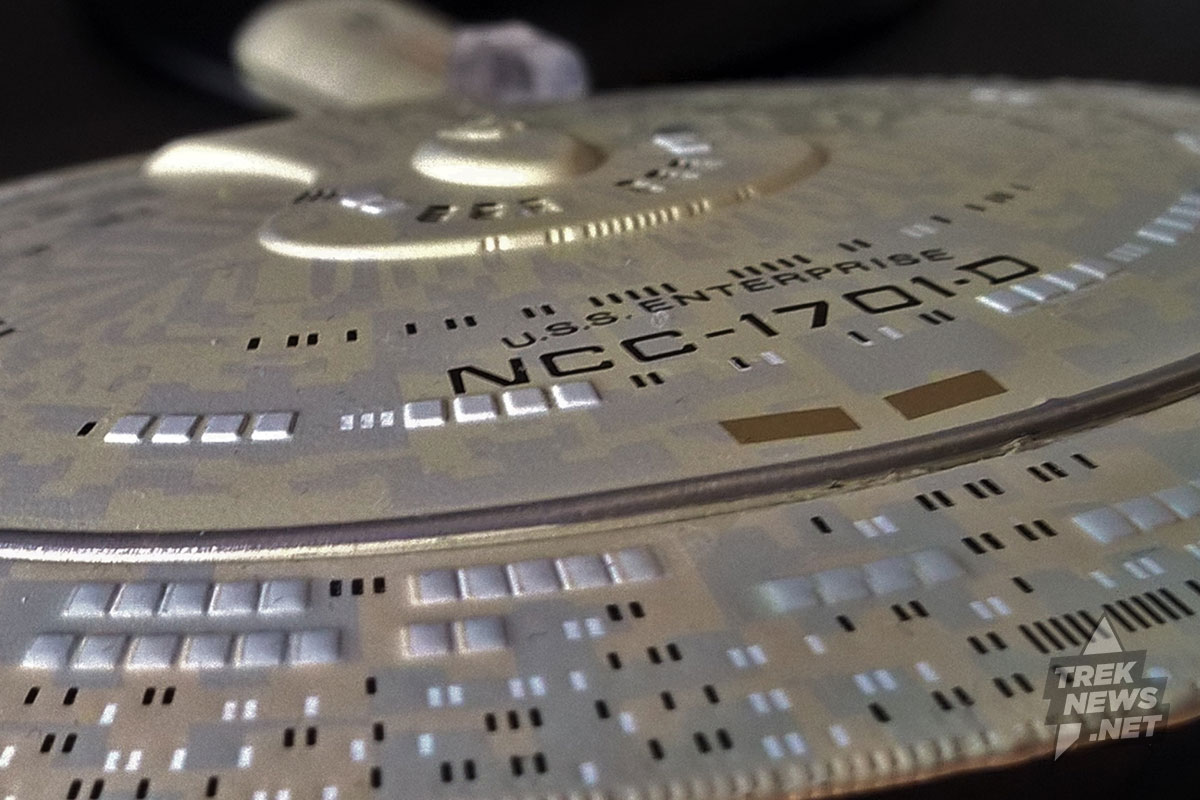 Close-up saucer shot of the Enterprise-D. Note the extreme detail.

The first thing customers will notice is the extreme attention to detail packed onto these small models. Take the Enterprise-D for example, as shown above. Every window, sleek hull line, and escape pod is accounted for on the over-sized oval saucer section. It looks even better than the miniature filming model they used in the show. In this way, Eaglemoss does a great job of showing the huge scale of the ship, despite only being a few inches long. 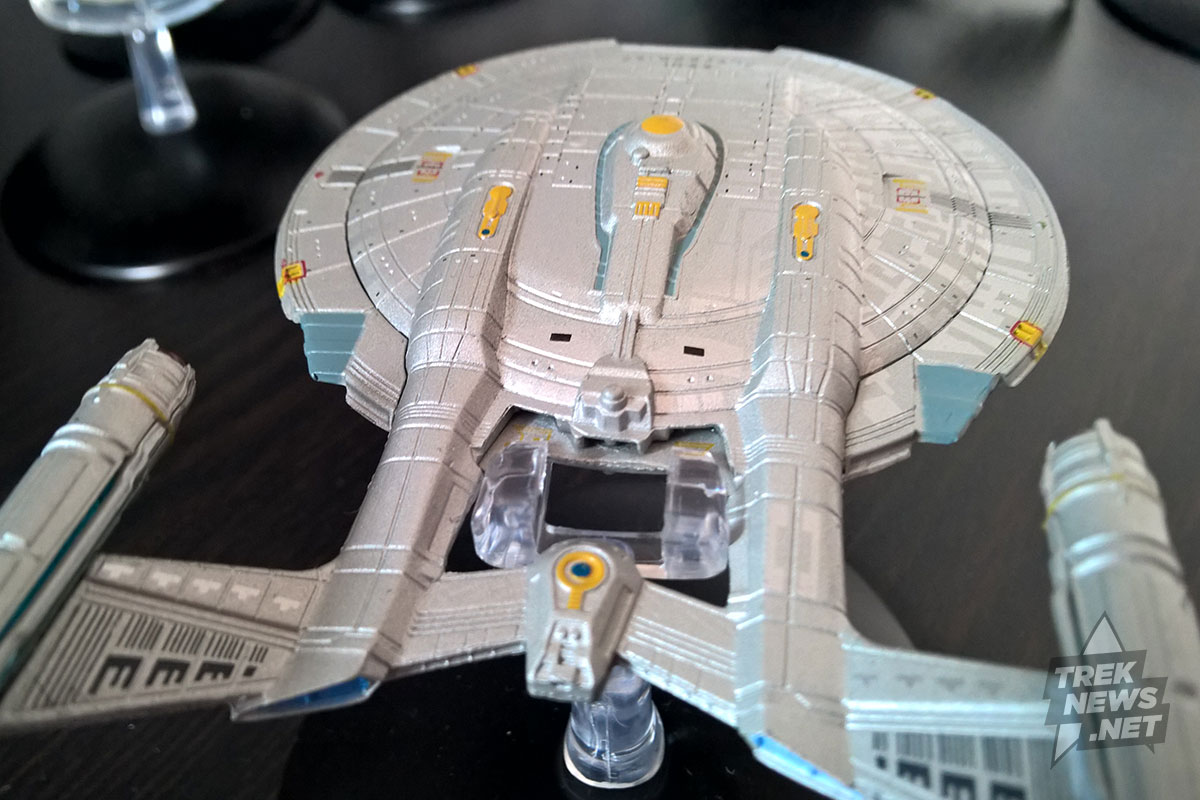 Anybody looking to pick up some of these models are likely going for build quality over anything. Every one of these models exudes precision. Take a look a the NX-01 above. Notice how the metallic hull plating and lines are perfectly representative of the then-new high-definition model we saw on Enterprise. Or take the Bird of Prey or Romulan Warbird, both shown below. On the Bird of Prey, the iconic Klingon aesthetic is perfectly preserved, with every angular line down to the disruptor cannon rendered accurately. On the Romulan Warbird, much like the Enterprise-D, every window and sweeping hull detail is there, impressive considering the limited 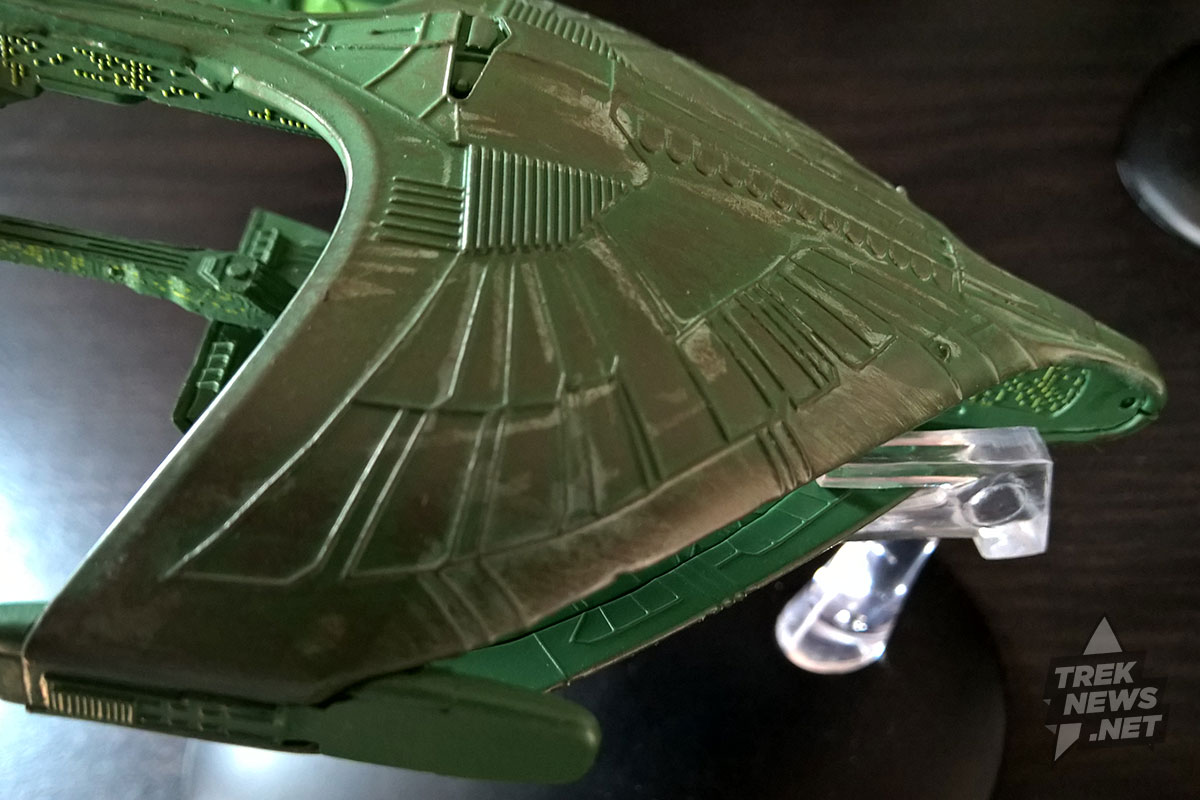 surface area with which to craft these designs. And if you look carefully, the Warbird and Bird of Prey even have a surface-level hull scarring texture around the model (most prominent on the Warbird picture). Don’t worry, this isn’t a result of damage to the model, but rather what seems like a dedicated (and successful) attempt to mimic years of service and battle damage. None of these alien ships are supposed to look pristine, so this addition is right on the money. 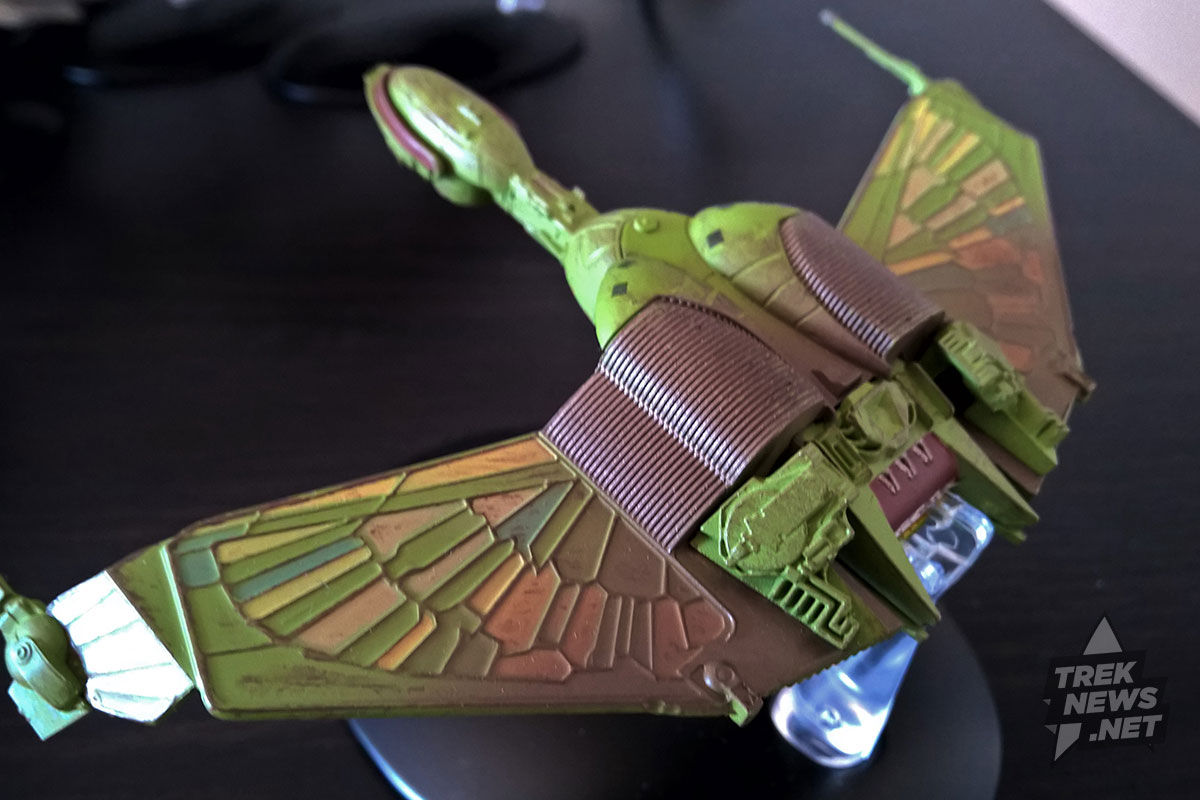 Klingon Bird of Prey. Unfortunately, the wings do not angle down.

The inclusion of the Tellarite Cruiser in this collection is representative of Eaglemoss’ attention to lore, and it’s certainly not the only deep cut from this collection. (If you browse through Eaglemoss’ catalog, you’ll find such obscure ships as the Curry-class cruiser as seen in about .365 seconds of one DS9 episode, or the Steamrunner-class of First Contact fame).  The Tellarite cruiser is an obscure ship for sure, seen only in three episodes of Enterprise as a blurry CGI model. But Eaglemoss has taken that ship and given it a makeover that is sure to excite those who care about such things. Indeed, more detail of this ship can be seen in this physical model rather than the ship’s appearances in the show. And because every ship in Eaglemoss’ collection is approved by CBS, you don’t have to worry that your money is going to an inaccurate representation of the ships you know and love, no matter how obscure.

If there was one con to be said about these models, it’s the stand. While the ships are most made of durable metal (capable of surviving without a scratch after falling from a desk), the stands themselves are not conducive to removing the models often. The plastic is apt to slip out of its base, or slips out from the ship too easily. If you don’t plan on playing with your models often, then this won’t be an issue; but those who want to remove the models from their plastic holders often will want to make sure one hand is securing the base and plastic stem before removing the model.

As a nice finishing touch, each ship also comes with a full-color magazine that details not only the specifications and design of the ship, but also its place in Star Trek history. Take the Tellarite Cruiser, for example. Despite its meager place in Star Trek lore, it still gets the full treatment from Eaglemoss. Of course, more popular ships like the Enterprise-A or its Galaxy-class counterpart have even more detail in their respective magazines. Good stuff. 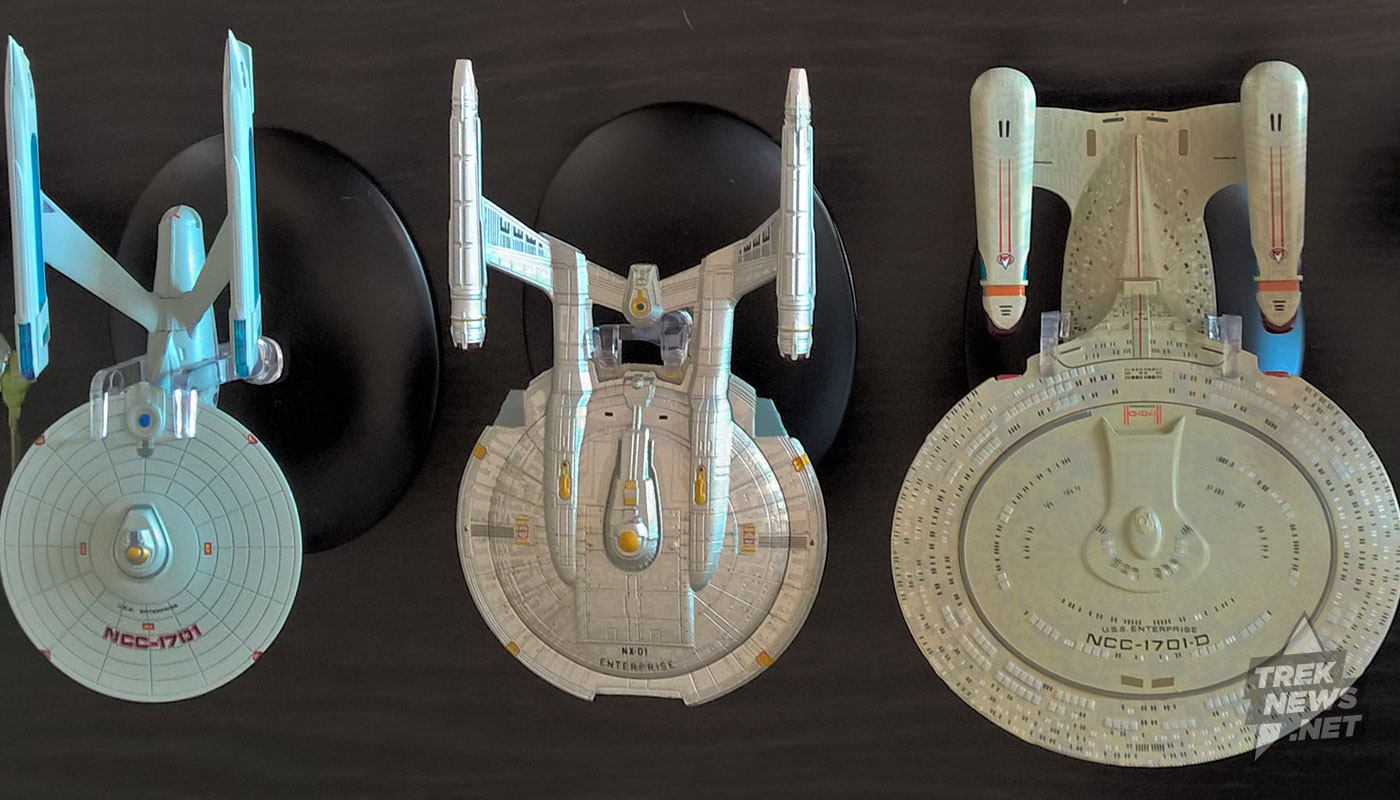 What Does [Your Name Here] Need With a Starship?

So the question is: should you invest in these models? Well, if you were holding back because of the build quality or accuracy, those fears should be put to rest. Eaglemoss continues to craft excellent tributes to Star Trek’s diverse lineup of starships, and if you see your favorite ship on there, definitely check it out. The regular-sized models make exceptional desk ornaments or little gifts to fellow Star Trek fans. The collection is available online at shop.eaglemoss.com or in comic stores for $22.95 for a single model. If you are looking to buy a few ships or own the full collection, then subscription is the better option. Visit st-starships.com to learn more about the subscription and its perks. If you are in the UK or EU, visit startrekships.herocollector.com to subscribe and receive the U.S.S. Enterprise-D for FREE, paying just £2.99/€3.99 for P&P.

However, Eaglemoss does have other model lines besides these smaller models, including the bigger (and arguably better) XL models. Stay tuned to TrekNews.net to see if those ships strike your fancy and are worthier of a space on your desk. And also stay tuned for a review of the first model from the Discovery lineup, the U.S.S. Shenzhou. Check out some additional images of the ships TrekNews was able to procure, along with some official pictures from Eaglemoss. 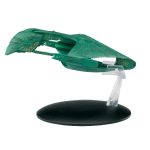 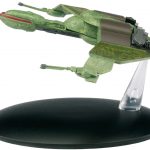 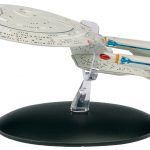 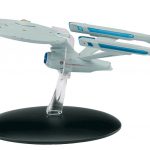 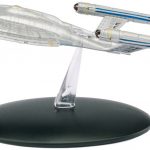