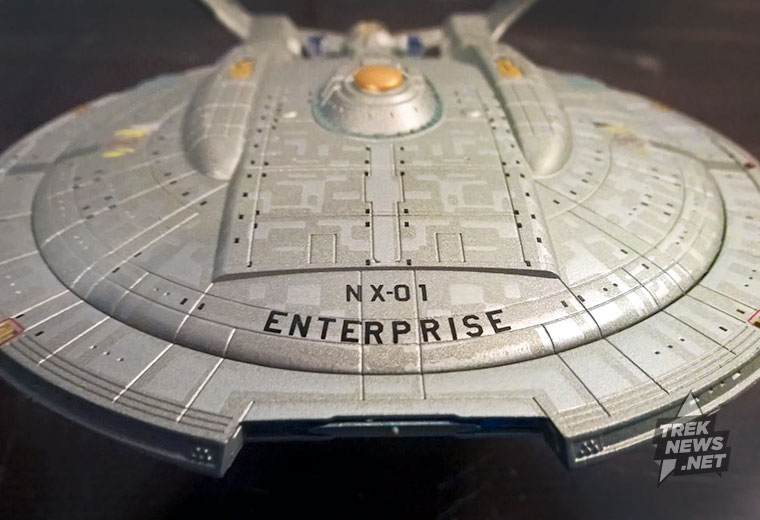 It’s okay to admit that you want a model of your favorite Star Trek ship on your desk. It’s like having a picture of your wife and kids to look at throughout the day (but DON’T use that analogy with them). The beautiful vessels through which the folks of the 24th century travel the stars are highlights of any Star Trek series or movies, and the opportunity to appreciate those designs should not be overlooked.

So stands the philosophy of Eaglemoss and their line of Star Trek models. In our review of their most famous line, the Star Trek Starships Collection, we looked at a handful of Eaglemoss’ smaller models. Overall, those ships are great little tributes to the varied starships of the Star Trek universe, and they make the perfect desk ornament or little gift to your fellow Star Trek fans. But at about 5 inches long, some people may want a bigger version of their favorite ship.

Enter the XL line of ships from Eaglemoss. These ships measure about twice the size of their smaller counterparts. Like with most things, bigger is better, and this maxim applies to this model line.

TrekNews was able to get our hands on these XL models, namely:

Much of the praise we gave the smaller models apply to these XL models. The build quality remains the same mix of die-cast metal and plastic, along with Eaglemoss’ supreme attention to detail. Take the NX-01 for example. 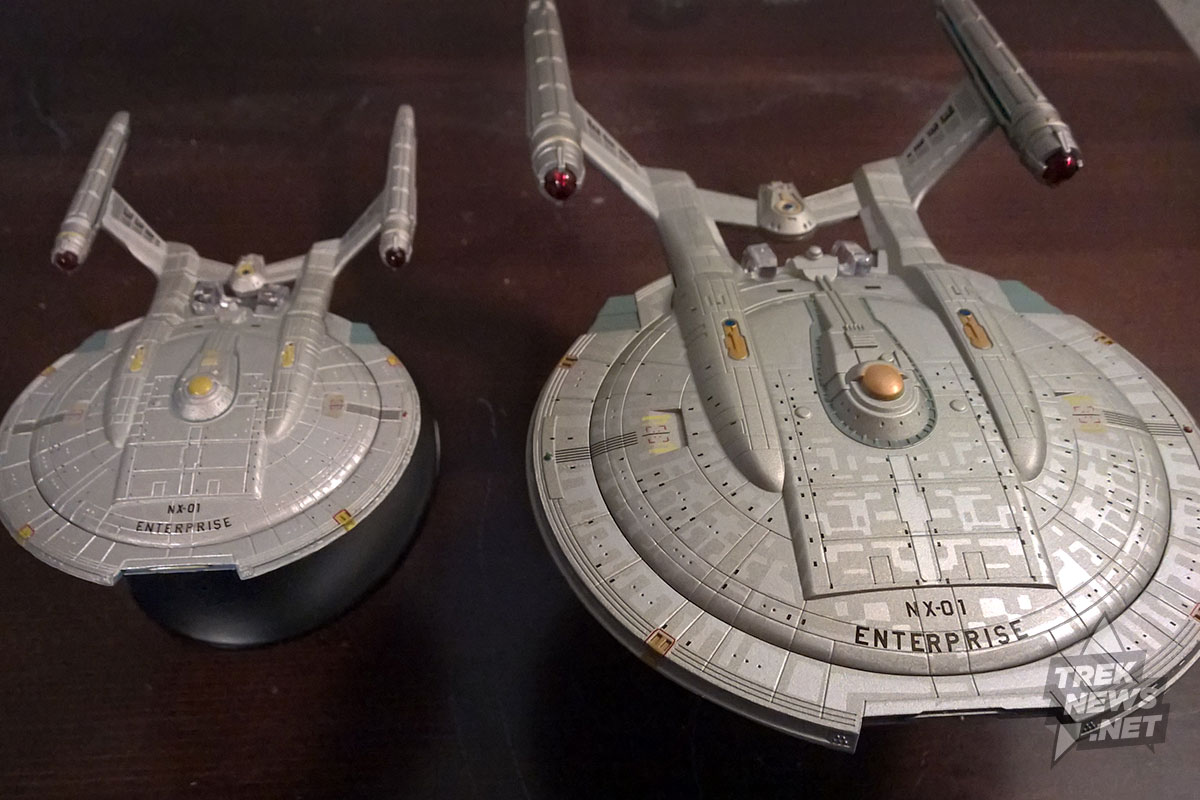 The increased surface area allows the metallic lines and  high-definition texture work to really shine, especially next to its smaller counterpart, which was already a great showing for the model. The wide geometry of this ship’s saucer section in Eaglemoss’ model grants a renewed appreciation for Doug Dexler’s design. The XL model really allows the hull’s various details, such as windows, markings, and curvature to attract the viewer’s eye. While the NX-01 isn’t my personal favorite from the Star Trek universe, this model is my favorite of the XL collection. It feels solid, looks sleek, and sits on its stand well thanks to a fairly even distribution of weight (more on this later).

Let’s take a look at the original Enterprise. In contrast to the NX-01, the XL size really spotlights how simple the Constitution-class shooting model was. Eaglemoss made no attempt to alter or jazz up the barebones look of the ship, and that’s for the best. The Enterprise is here in her original, plain-looking, 1960s-shoestring-budget glory, and she’s beautiful. There’s a striking difference between the geometric and texture complexity of the NCC-1701‘s hull and that of basically every other ship, and this model highlights this simplicity perfectly. 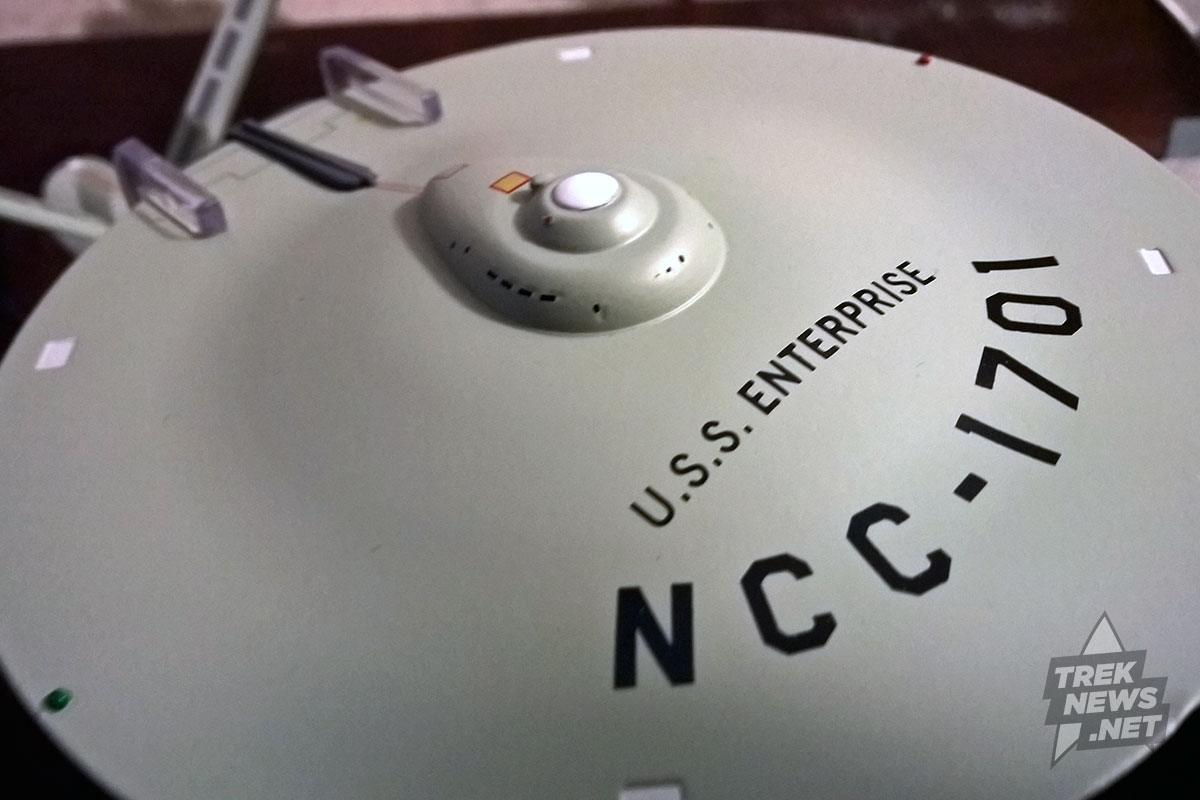 This model should definitely not be hauled away as garbage.

The same downside we mentioned with the regular model line – the fairly weak plastic stand that accompanies each model – applies to these XL models, as well, with perhaps more severity considering the increased model size and differing weight distribution. Voyager is the worst offender here. Since the ship is quite saucer-heavy (no more evident than looking at a top-down view of the model), the ship can slip out of its stand with far too much ease. While a bump on a desk won’t hurt the model, it’s best not to let it drop from the desk. Otherwise, Voyager is an XL model you’ll want to pick up and admire often. Even though we see much of the ship in the show’s seven-season run, it’s often a CGI model. So, the ability to pick out obscure details like the Aeroshuttle that is present underneath the saucer, but never seen disembarked on the show, is fantastic.  While it would have been a pretty cool if Eaglemoss added the ability to move the warp nacelles, prospective buyers should note that this model lacks that feature. 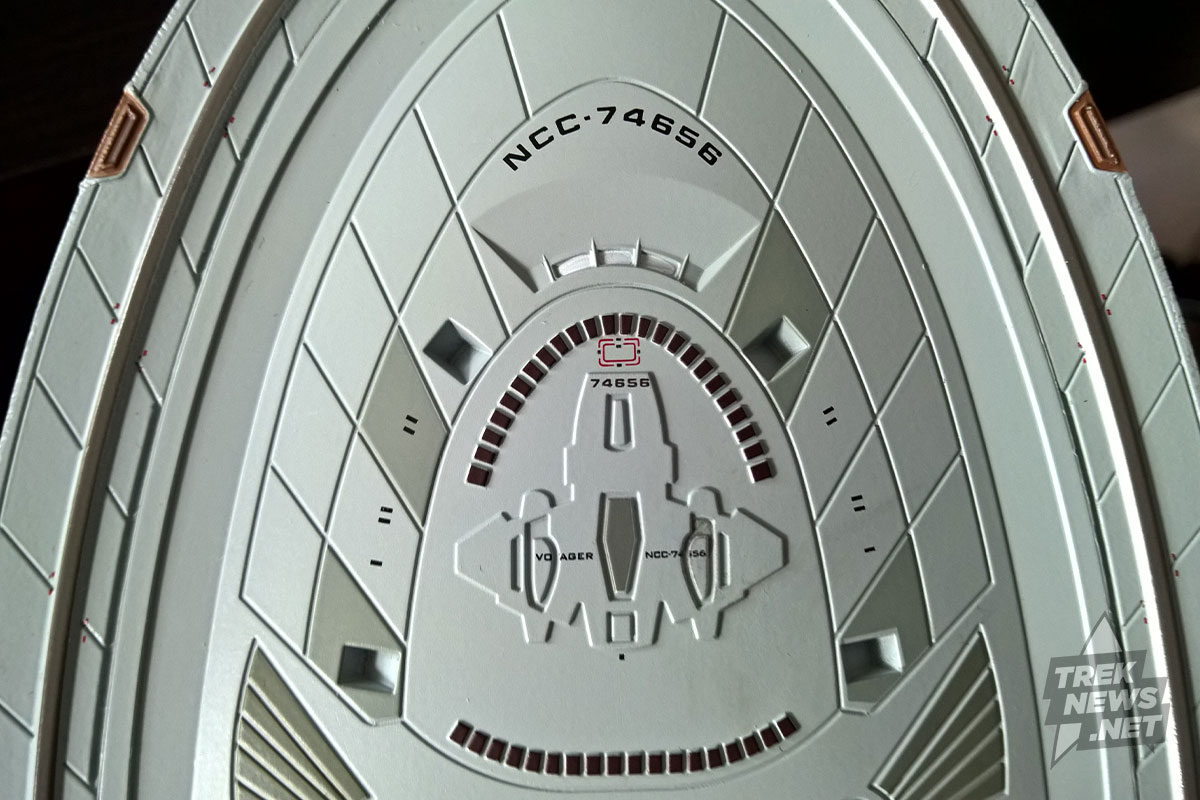 Surely the Aeroshuttle could have come in handy in the Delta Quadrant? 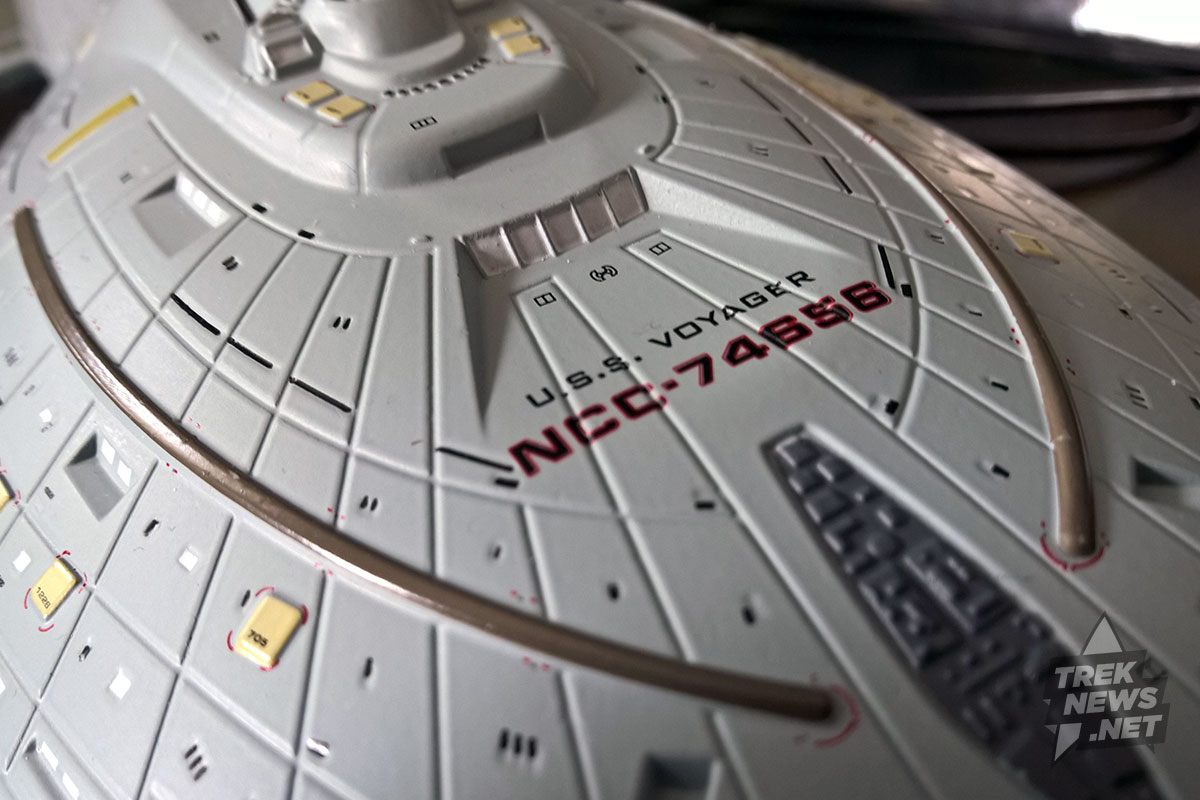 You can even see the numbers of Voyager’s escape pods.

While the regular-sized model line has the best variety (one of my favorite examples is the U.S.S. Buran – it’s okay if you have to go to Memory Alpha for that one), this XL line is limited to only the most popular ships. The ships pictured below are the only XL models available right now. There is the Enterprise-A on the way (available for pre-order in May), but obviously pickings are slim.

The current line of XL ships.

Those wanting one of these XL models need to be willing to pay for it. At $75 per model (sans subscription pricing Eaglemoss offers, more on that soon), these ships are three times as expensive as their smaller counterparts, despite being only about twice as big. This might cause some pause for some who might see these XL models as overpriced, but we are assured that the added cost is due to the greater amount of materials built into the model, as well as the extra time it takes to paint the ships. So with that considered, we can offer some advice: if you are looking to get only one or two models from Eaglemoss’ collection, then making that leap on these XL models is worth it. They look great either sitting pretty on their stands or flying around in your hands. But no matter how you use it,  these models offer the viewer a renewed appreciation for the incredible designs of the Star Trek universe. 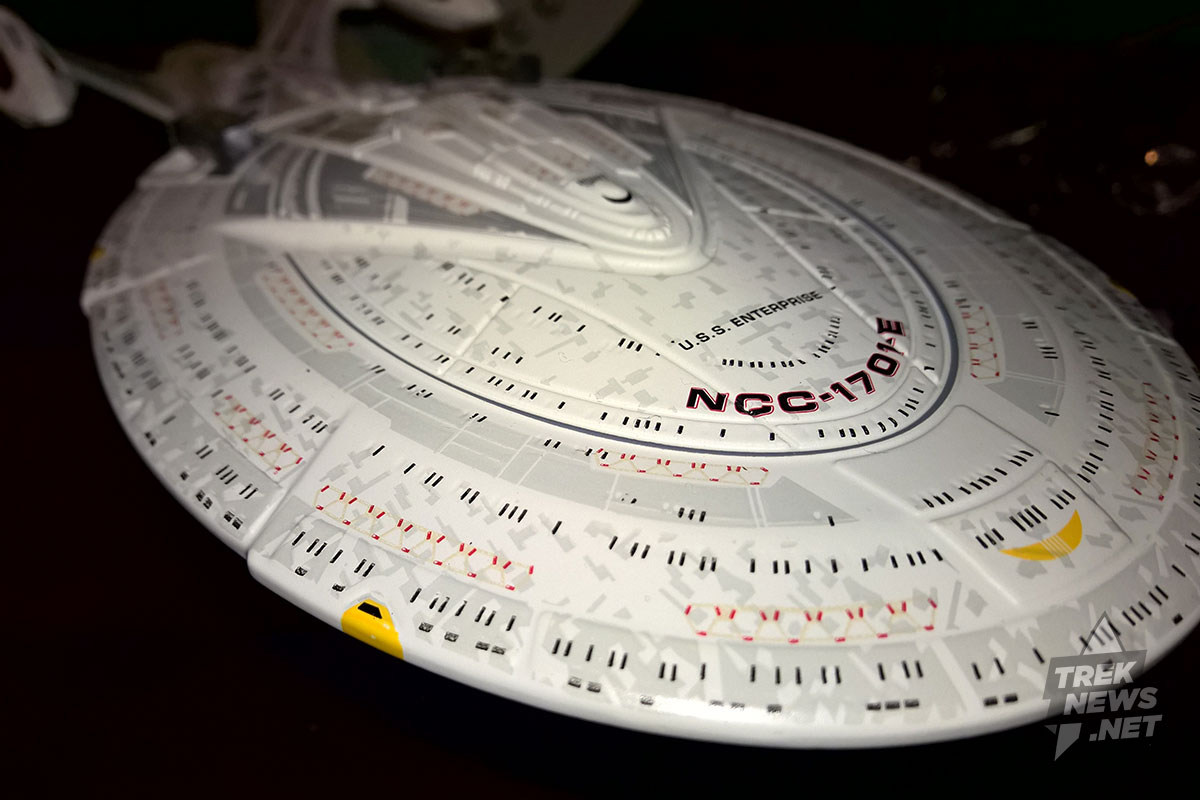 The larger model is great for the Sovereign-class. Why didn’t we get more movies with this beauty?

Those who don’t want to stick to just one or two models can opt for a subscriber option. Those opting for this route start with the XL Voyager model for 20% off the retail price, and you’ll also receive three exclusive free gifts worth $100 as part of your subscription and you may cancel at any time. Additional ships will arrive monthly for the same 20% off. Visit st-starshipsxl.com to learn more if you are interested in the subscription. You can also buy the XL Edition Starships online at shop.eaglemoss.com or in-store at your favorite comic shop.

Stay tuned to TrekNews for reviews on the Discovery lines of starship models.