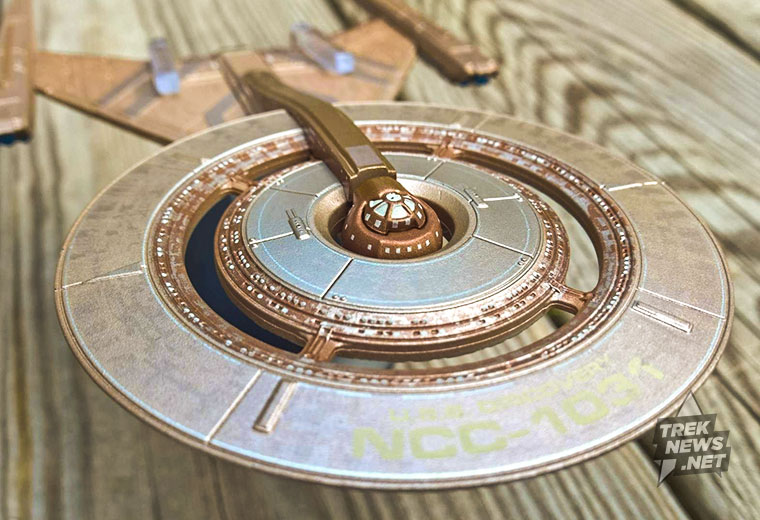 One of the joys of seeing new Star Trek, either on television or in the theater, is the chance to see new starships. Luckily, we’ve had plenty of opportunities for this in recent years, with Star Trek back in cinemas and on streaming devices everywhere. Star Trek: Discovery certainly has given us our fair share of new space-going vehicles, from the action-packed Battle of the Binary Stars in the show’s two-part pilot, the titular ship herself in all her pointy, spinning glory. Starship model maker Eaglemoss jumped on the opportunity to explore every contour of these new ships, and the results are, as always, impressive.

There are two currently available models from the Star Trek: Discovery line: the USS Shenzhou, and the USS Discovery, with more ships, such as the ones from the Battle of the Binary Stars, promised to come. These are two of the best choices to be introductory models for the new line, as we see much more of them on screen compared to, say, the other Federation or Klingon ships throughout the series. If these ships are indicative of the quality of the new line from Eaglemoss, then Discovery fans are in for quite a treat.

“All Existing Things Are Really One”

Let’s start with the Shenzhou, as it’s the first new ship we see in the series. Many fans were immediately taken by the design of this Walker-class starship, and for good reason. Its design is familiar to Star Trek fans, as its down-swept nacelles are reminiscent for the Akira­-class, or an upside-down Enterprise. But the Shenzhou is more angular, sleek, and in line with Discovery’s more modern take on Star Trek starships.  The Eaglemoss model is mostly faithful to this; indeed, the model itself is literally sharp, with its pointy nacelles, deflector dish prongs, and hull features. Really, be careful how you pick this one up. 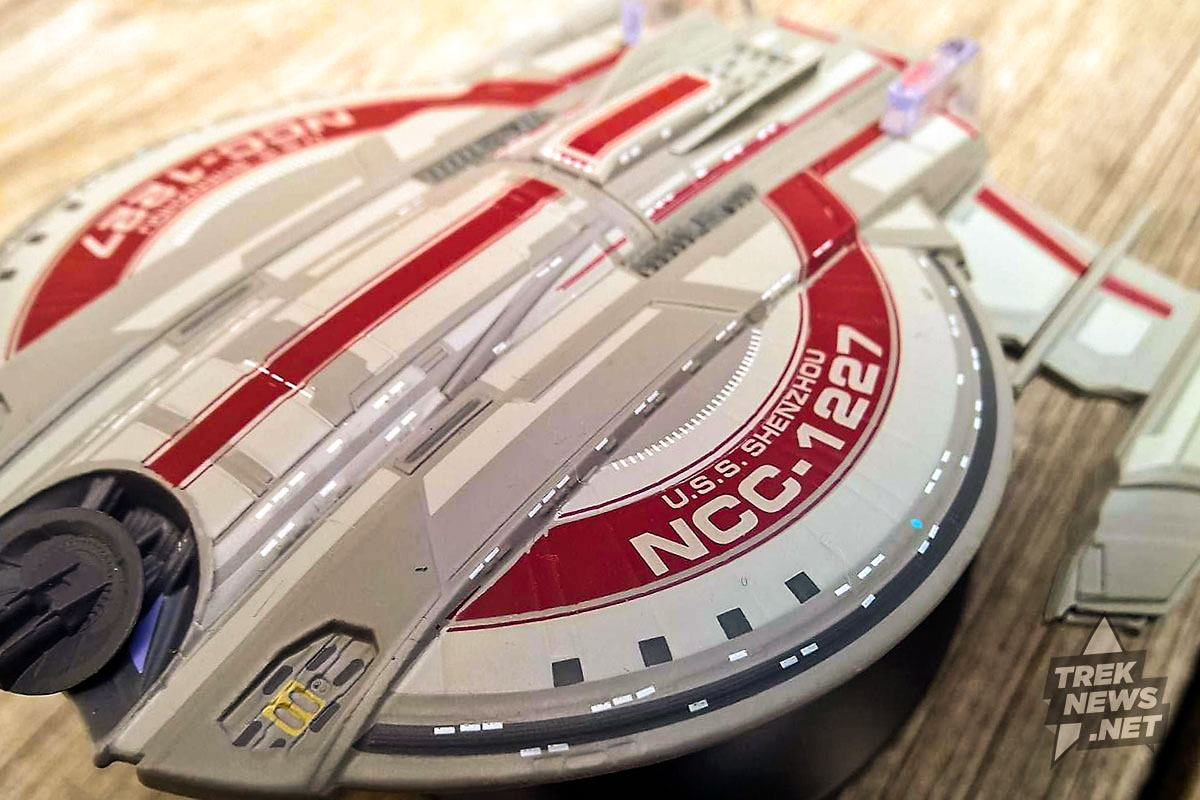 There’s not much to fault about this model, save for the coloring on the deflector dish. One of the distinguishing features of the Shenzhou is its purple deflector, but the Eaglemoss model colors that part of the ship black, as if the deflector is turned off. There is purple coloring for behind the deflector, as there should be, but the deflector itself should have a purple ring around the inside. The ship’s other notable coloring, like the red lines of red across the hull, is displayed accurately, so it’s a shame that this one feature is absent. But don’t worry, the ship’s other major distinguishing feature, the bridge located on the saucer’s underside, is there and noticeable.

Check out our Starship Shenzhou model gallery for multiple perspectives of the model in all its pointy glory. 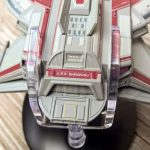 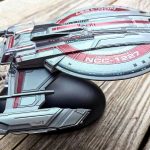 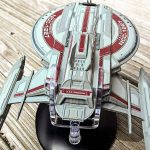 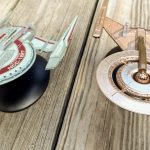 “All Things Can Be Understood Once They Are Discovered; the Point is to Discover Them.” 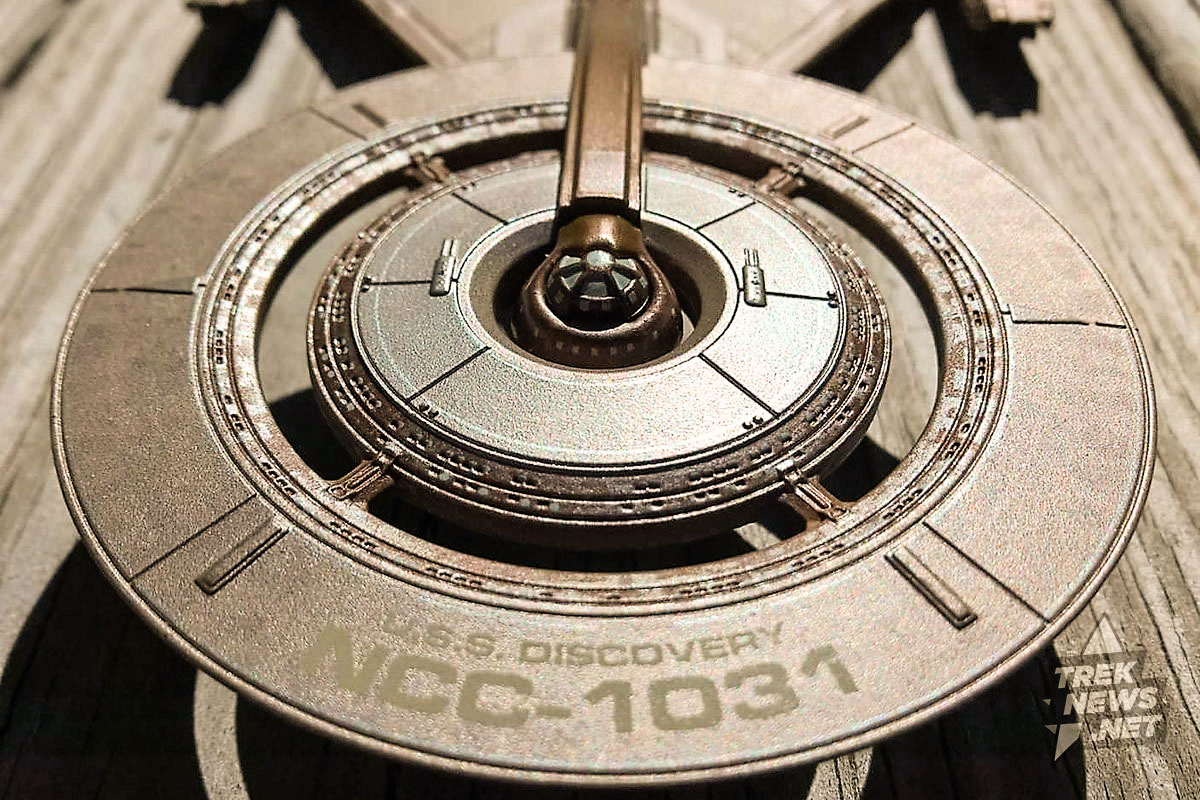 The Discovery model is perhaps the most important model in this line from Eaglemoss; it’s the flagship, after all. And apparently, the importance of nailing the Discovery wasn’t lost on Eaglemoss. From its unique bronze coloring, to the extra-long warp nacelles, to the incredibly tiny deflector dish, the Crossfield-class model is faithful to the show.

With the ability to peer more closely at the ship than ever before, small details emerge that you might not have been caught on the CGI model. For example, did you realize the Discovery’s buzzard collector is really a trio of blue bulbs, and not the typical singular collector seen on countless Federation starships? Or that a pattern of silver striping can be seen from a birds-eye view on the ship’s engineering hull? Or that the bridge is sectioned off into five distinct panels, along with a typical circular window on the top (best scene in season one’s last episode, in a shot reminiscent of the opening scene of “The Cage.”) If you enjoyed the design of the Discovery, then pouring over the model should be a good time indeed. And no, just like with Voyager’s nacelles, the Discovery does not have any moving parts, meaning you can’t replicate the sleek spinning motion the ship’s saucer goes through before a spore jump.

Unlike the one issue with the Shenzhou’s deflector, there’s nothing to fault on the Discovery model, except an issue we pointed out with other Eaglemoss models: the plastic stand is still a drawback from an otherwise solid presentation. These ships easily slip out of their stand if even a small amount of force is applied. If Eaglemoss were to fix this issue, these models would likely appeal much more to people looking to constantly pick up and play with their ships, instead of just admiring them from afar. 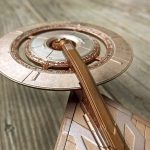 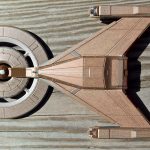 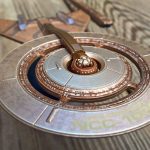 This first two models paint an impressive picture of Eaglemoss’ dedication to Star Trek‘s return to television. With the exception of the disappointing deflector issue on the Shenzhou, fans will enjoy these models as they wait for season two of Discovery. With the promise of more Discovery ships on the way, such as those we saw at the Battle of the Binary Stars, or the amazingly detailed Sarcophagus ship, Discovery certainly is providing a lot of new content for those who relish admiring Star Trek ships.

Fans who subscribe to the Official Star Trek Discovery Starships Collection enjoy special savings and a host of exclusives. Full details may be found at eaglemoss.com/Discovery. If you’d like to purchase their favorite ships individually may do so either online at shop.eaglemoss.com or at their local comic book shop for the regular price.