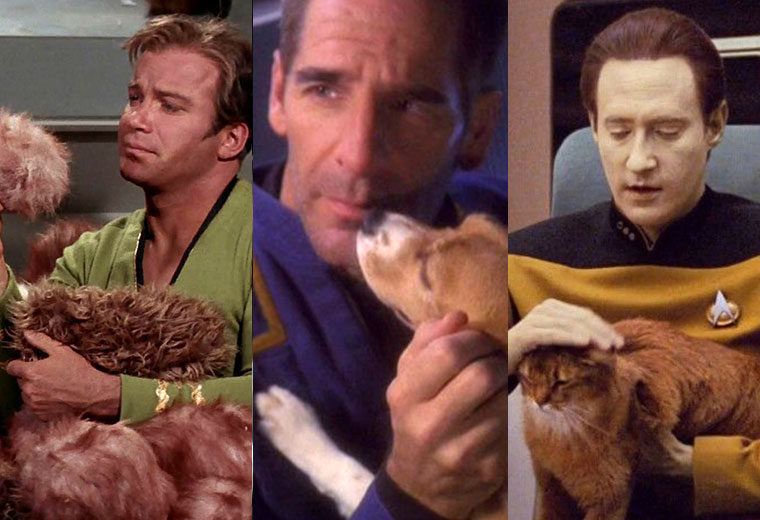 First things first, what determines a “space animal?” The Mugato is a gorilla-like beast that proudly displays a thick white pelt, a gnarly horn pointing skyward from its forehead, and packs a savage row of serrated teeth tipped with venom. Seems like a perfect candidate, but the Star Trek Las Vegas crowd, with the urging of moderator Jordan Hoffman, booed a Mugato defender from the microphone. Several screamed, “Too much sentience!” 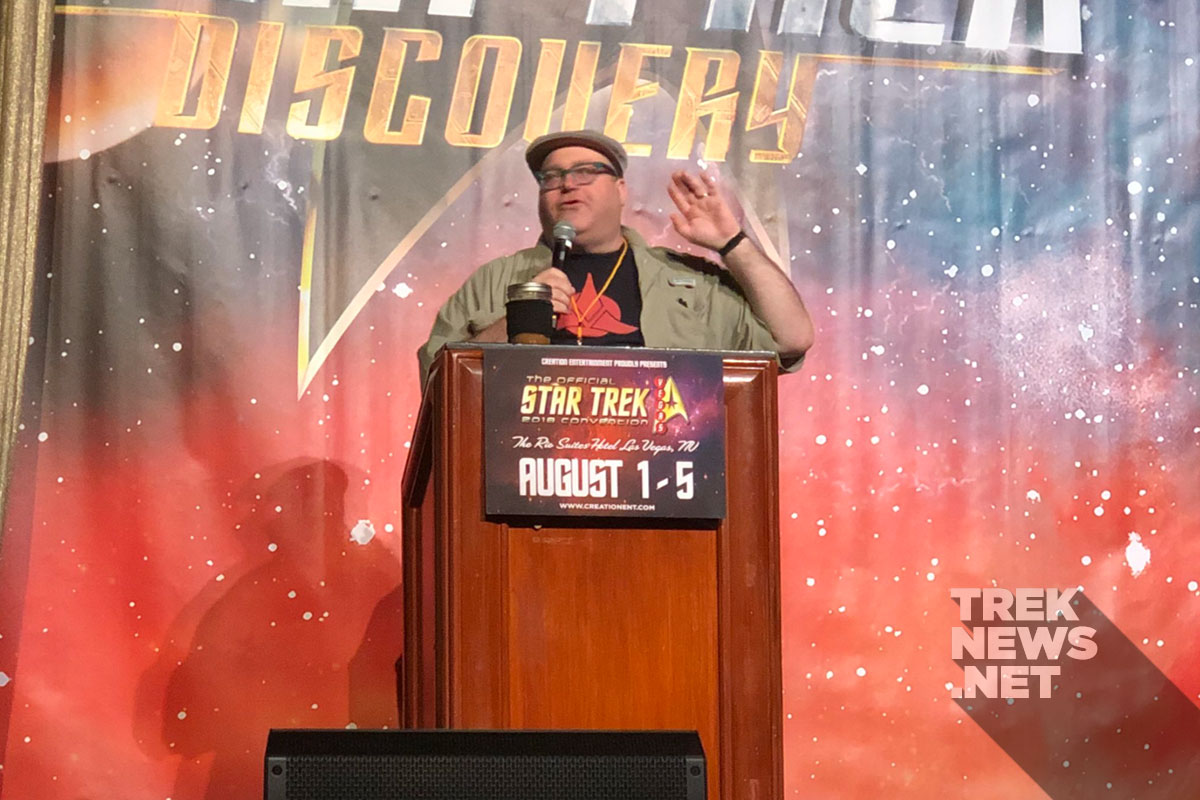 When another pled their case for Beauregard, Sulu’s carnivorous pet plant, Hoffman and the crowd callously dismissed the selection as mere fauna. Not enough sentience? The conversation was lively, and the cataloguing was serious. No B-level beasts or wannabes here. As usual, the One Trek Mind panel was looking to lay down the law, and revel in a definitive Star Trek ranking.

Before the audience could plead their case, Hoffman refreshed our minds with a lengthy listing of as many space animals as one man could remember. All the usual suspects were there. The Tribbles, Spot, the Ceti eel, George, Gracie, and Mollie the Irish Setter… yeah, Mollie… did she even make it to space?

Hoffman did his best to work Captain Janeway’s Irish Setter into the ranking, going so far as to quietly plop her into the number ten spot before the excitable attendance urged her removal. Mollie may have been one of the hearts Janeway dreamed to return to one day, but Terran born hounds who never left orbit, let alone space dock, have no business alongside daring travelers like Data’s Spot. 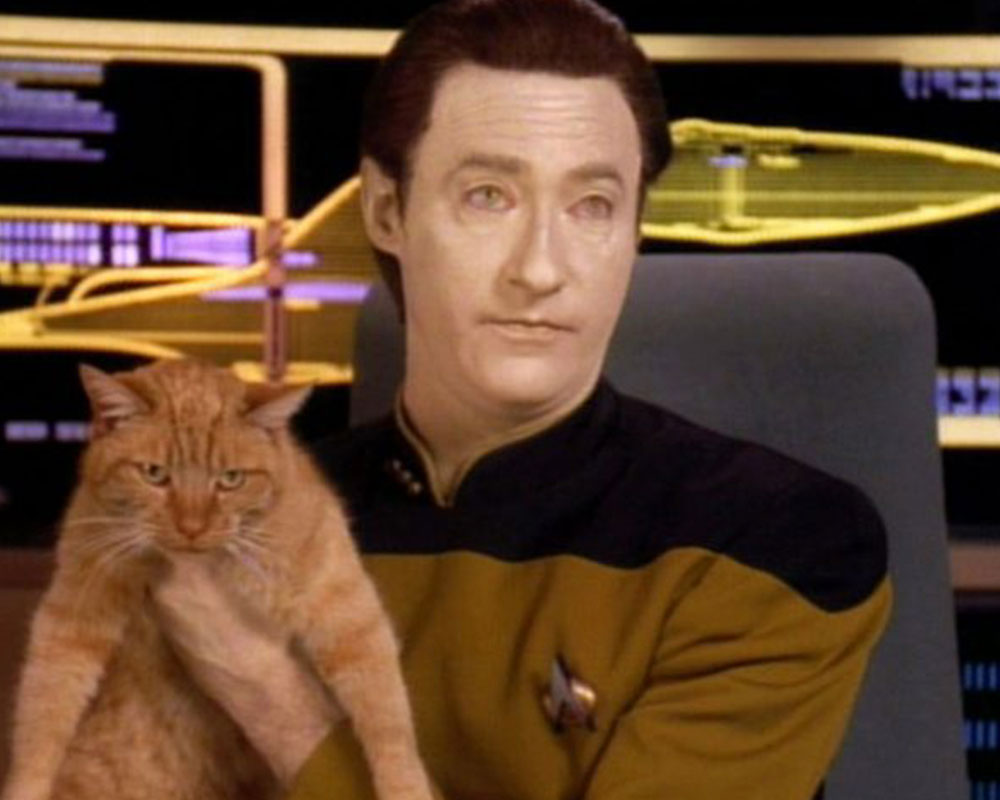 The top ten space animals were chosen fairly easily and without serious incident. Most were nominated from the list Hoffman initially presented, but one die-hard managed to fight for a forgotten breed. Cardassian voles are wretched little creatures that scurry upon six legs and breed as rapidly and voraciously as Tribbles. They are constantly referenced in DS9, causing at least one major infestation on the station, and considered to have a superior bedside manner to the cranky demeanor of Chief O’Brien. The vole is ugly-cute and had to find a way into classification.

In @jhoffman’s One Trek Mind LIVE!! I hope the horta makes the cut!! “No kill I.”😭#stlv #stlv2018 pic.twitter.com/HESRXEBdip

Dr. Phlox’s Pyrithian bat was another sly placement on the part of Hoffman. After naming Mollie number ten, he forced the bat into the five spot. The crowd was cool with some manner of placement, but five was deemed far too high. You gotta admire Hoffman for urging favorites into high positions, but the audience was here to declare their passions and keep the moderator honest. After Mollie fell off, Phlox’s Pyrithian bat slid to the bottom.

Alfa 177 nearly broke the top five by simply being so damn adorable. Appearing in “The Enemy Within” gives this pooch the distinct advantage of being the first dog to appear in Star Trek. He also has the privilege of being an early victim of transporter malfunction, splitting into two separate entities and foreshadowing the terrible doom of double Shatners. 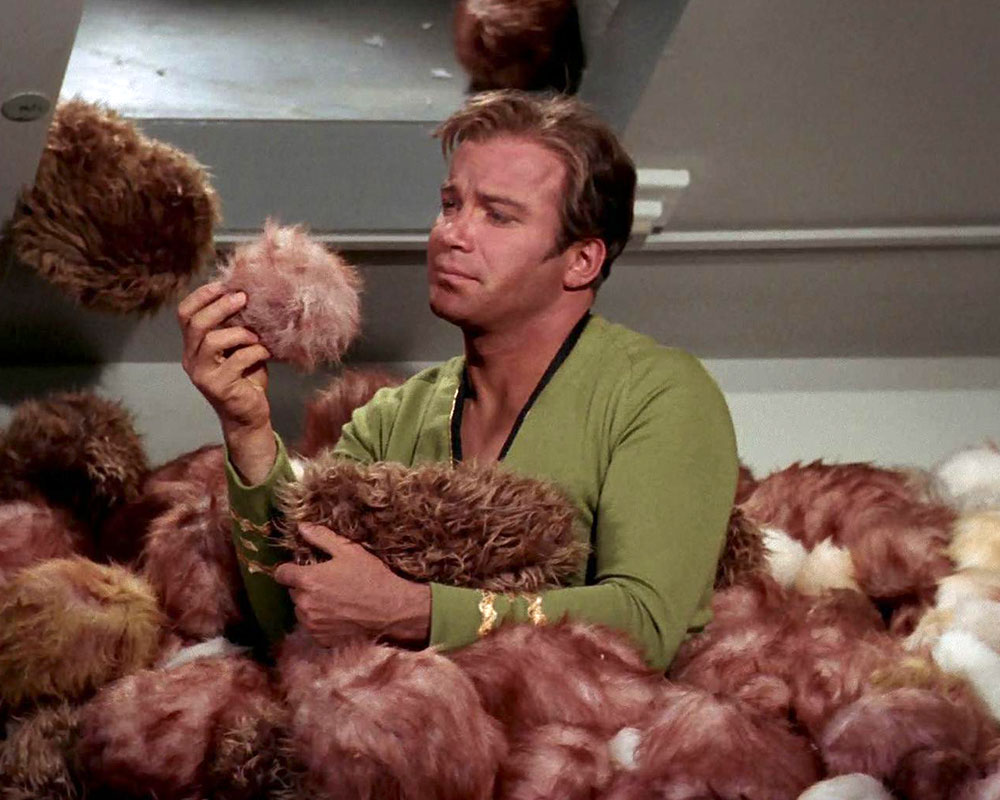 Iconic does not get you into the upper echelon of space animals. For that status, you need to affect significant emotional change in our crew. I-Chaya the Sehlat also made only one appearance in canon (although, an alternative member of the species can be seen in the Enterprise episode “The Forge”), but his impact was profound on Spock. In “Yesteryear” of the animated series, we learned that our favorite Vulcan’s pet Sehlat was mortally wounded protecting him from a ravenous le-matya. Rather than watch I-Chaya suffer through his death throws, young Spock logically elected to euthanize his friend. The Sehlat will forever rest in peace and dignity at the number five spot.

Star Trek: Discovery got some love in at number four. Ripper, the tardigrade is key to operating the mycelium network that powers the Discovery’s spore drive. No Ripper, no black alert. No black alert…gosh, the federation would have been taken out of the game by the Klingons early on. His DNA is infused inside Lieutenant Paul Stamets. Ripper opened the eyes of a cold scientist, allowing him to reconnect with the ethos of Starfleet. 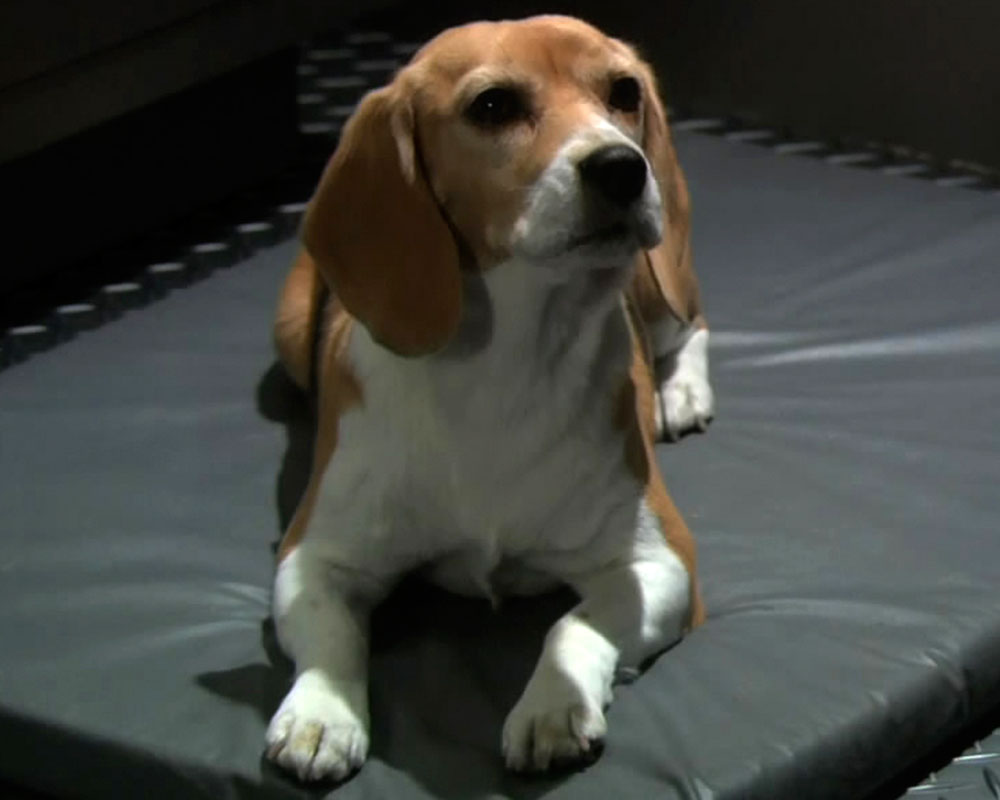 The determination of the number one slot came down to which fan base could scream the loudest and the longest. Porthos, Spot, and the Tribbles. No one wanted to back down, but team Porthos got hoarse quick. He’s a loyal companion, and the cutest little beagle gallivanting around the cosmos. Also, as Hoffman pointed out, the scrappy hound created an interstellar incident with his pee in “A Night in Sickbay.”

Spot holds all the love that Data could never experience. She didn’t care if the android understood the concept of comedy or not. Data was always there to give her head a pat, and she responded in kind. Spot is also nearly indestructible having survived the terrifying crash landing of the Enterprise-D after the Duras sisters blew her out of orbit. Upon discovering the quivering kitty alive and well amongst the rubble, Data and his newly installed emotion chip unleashed a torrent of tears representing years of pent-up emotion for his feline friend. Dang, Spot, you were robbed of the top spot. 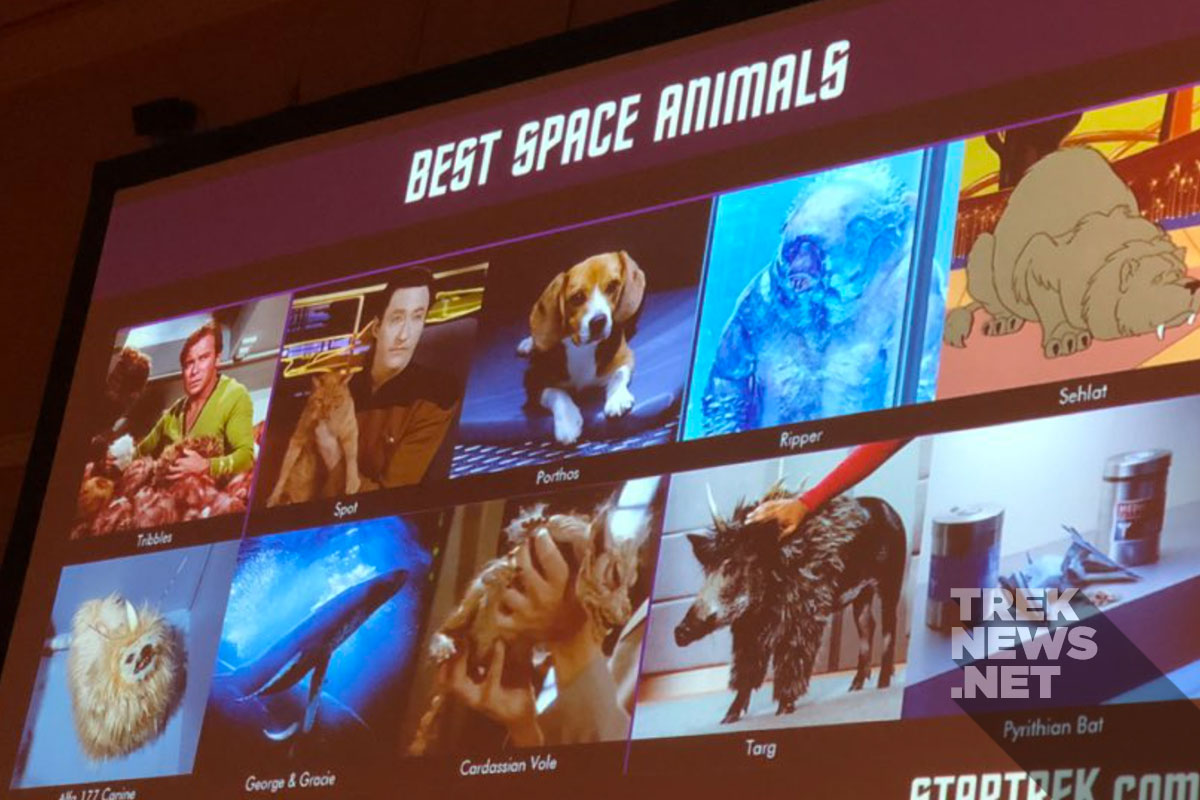 However, the people have spoken, and the Tribbles rank as number one. From a branding point of view, the little Klingon nightmares are hard to argue against. They’re everywhere. Plushies, Hallmark ornaments, jewelry, and slippers. Tribbles are squished and molded into all manner of purchasable plastic. Not only do they appear in the original series, but they’re peppered throughout the franchise, appearing in everything from Deep Space Nine to J.J. Abrams’ relaunch, and Star Trek: Discovery. They live up to their purpose. They breed, they’re unstoppable, and they’re indifferent to their overwhelming nature.

One Trek Mind is always a must-sit experience at the convention. If the audience is ready for war, the debate stirs deep-seeded passions and will have you screaming for the honor of the Cardassian Voles. To miss such excitement would be foolish.