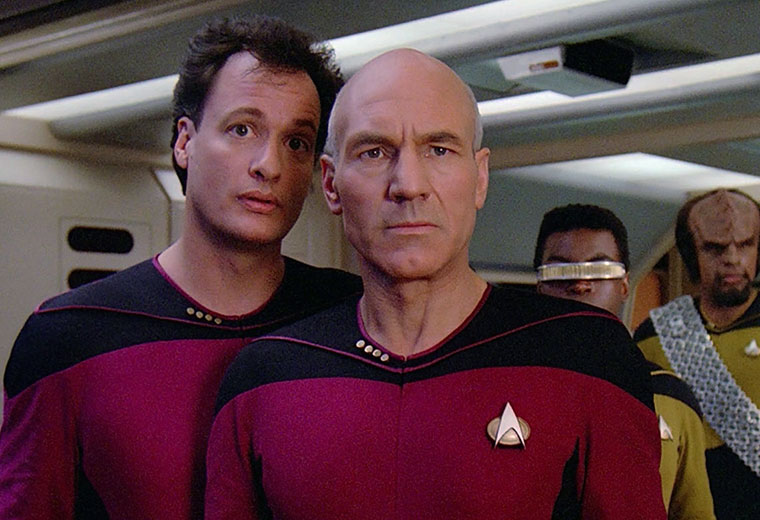 If you’re anything like me, odds are that you’re still flying high from the recent announcement – by none other than Sir Patrick Stewart himself – of a new Star Trek series focused on Jean-Luc Picard. As recently as one year ago, a revelation of this magnitude would’ve been nothing more than a Trekkie’s daydream. But today, in a post-“Discovery is a massive hit for CBS” world, the galaxy is the limit when it comes to fresh Star Trek content. We’re entering Trek’s next “golden age” and I for one couldn’t be more excited about what the future holds.

Since we have yet to hear when the new show will air (we don’t even know when filming begins), that probably means that we’re at least one year away from laying eyes on a post-Nemesis Picard and Federation. We Trekkies are inclusive, smart, and loyal – patience, however, is not our strongest collective characteristic.

To fill the time between now and when the new show airs, most of us will undoubtedly be revisiting many a Picard-themed episode of The Next Generation. Which leads to the question which inspired this blog: what episodes would make up the ultimate Picard binge watch? Trickier still, what string of episodes could both satisfy a die-hard fan’s appetite and serve as a robust introduction to the character for a TNG-neophyte?

After some soul-searching and intensive Data-level-scanning of Memory Alpha, I’ve assembled the below list of ten episodes (I’m counting any two-parters as one episode – blogger’s prerogative). Each season of TNG is represented and every episode picked is either central to Picard’s overall story arc or serves to showcase a key character trait. So without further ado, happy bingeing Trekkies!

The ten best Captain Jean-Luc Picard episodes of Star Trek: The Next Generation

The beginning is always a good place to start. While TNG’s pilot is relatively weak – particularly compared to the Trek pilots that followed – “Encounter at Farpoint” does a good job of introducing us to our deeply principled and headstrong Captain. His thoughtful and resolute rebuttal of Q and his reaction to the bizarre happenings at Farpoint establish a character willing to think before he acts. 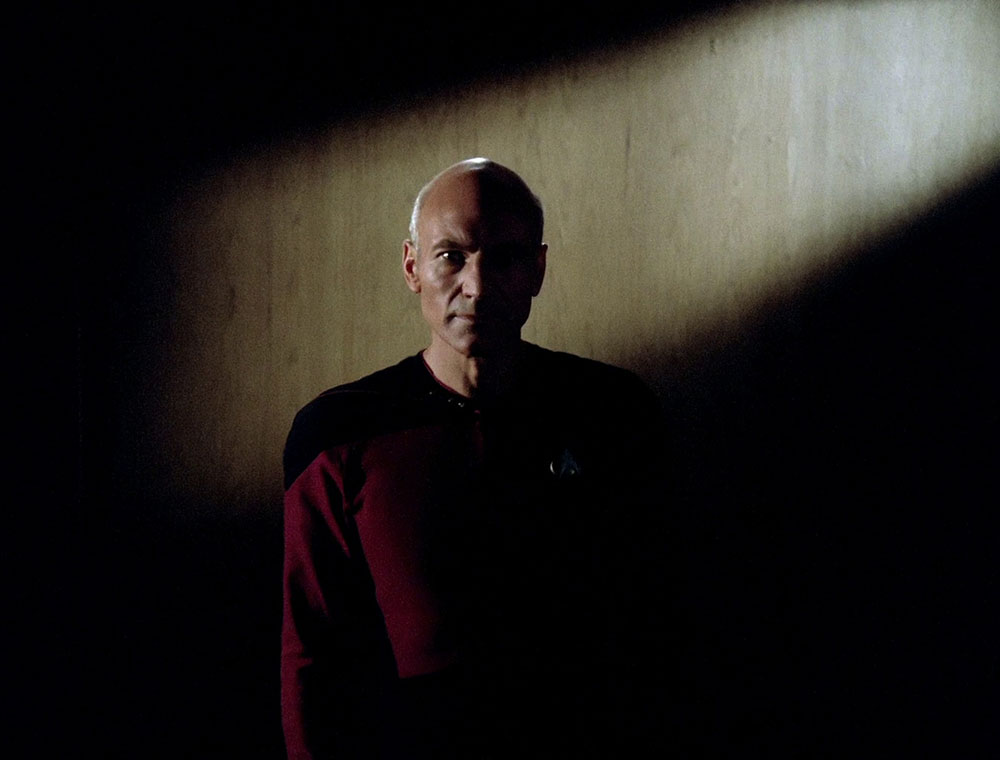 This is one of the weirdest and creepiest episodes of TNG – and a personal favorite (that very last shot – nothing quite like it in all of Trek). While time hasn’t been kind to the creature effects of this episode, the story of an alien infiltration of Starfleet more than holds up. “Conspiracy” cements Picard as a critical thinking and skeptical leader; one who believes the protection of the Federation’s founding principles to be of the utmost importance (even if it means disobeying orders). While not a Picard-centric episode, “Q Who” introduces to one of TNG’s main antagonists and to the species that most profoundly impacts Picard’s psyche and story arc. This a key moment in Federation history and an episode that sets the scene for TNG’s biggest showdown (and one of television’s most epic cliffhangers). 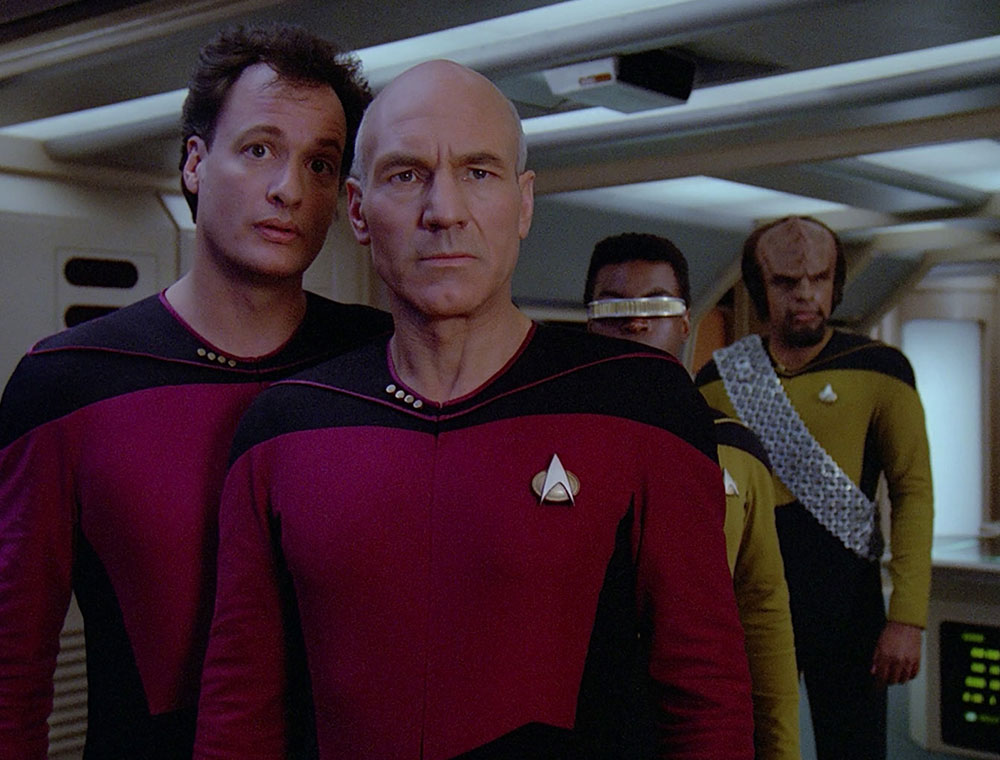 Airing immediately after “Q Who,” “Samaritan Snare” is the most surprising entry on this list. The main A-story revolves around Geordi being kidnapped by a pack of mumbling, quasi-space-pirates. However, the B-story – which takes place almost entirely in a shuttlecraft – centers on Wesley desperately trying to engage with and get to know our stoic Captain. Wesley is a proxy for the audience; until this point in TNG’s run, Picard had rarely let his guard down. When Picard finally opens up to Wesley (and us) we’re told surprising stories of a defiant youth, why he never married, and his views/opinions on a range of topics. For the first time, we see Picard well beyond the intellectual and focused leader. Picard’s entire character arc can be divided into two-parts: pre-Locutus and post-. “The Best of Both Worlds” represents a definitive turning point for Picard (and for TNG itself). This is easily among the show’s finest hours, not just for the great story and action, but also for the ramifications for our Captain and for the entire Star Trek Universe (the events of this episode serve as the foundation for “Deep Space Nine,” for “First Contact,” and for many an element of “Voyager”). The Borg brutalize Picard and forever warp elements of his character. Picard carries the scars and trauma of his Borg-experience throughout the rest of the series and into the TNG films. The newly announced series will most definitely revisit this at some point. “The Best of Both Worlds”

Despite the episodic nature of TNG, and of television at that time, “Family” is a direct sequel to “The Best of Both Worlds.” How does Picard begin to heal after his kidnapping and forced Borg-transformation? The answer is slowly and with even more conflict. This time, the conflict takes the form of something we can all relate to: complex family dynamics. While the Enterprise is being repaired in Earth’s orbit, Picard goes home to La Barre, France to spend time with his brother Robert and his family. What he finds in France is the airing of words and grievances that had lain dormant for far too long. We’re always told Picard is a military man, not a family one. In “Family” he’s forced to deal with a situation he can’t command and he is better for it at the end. 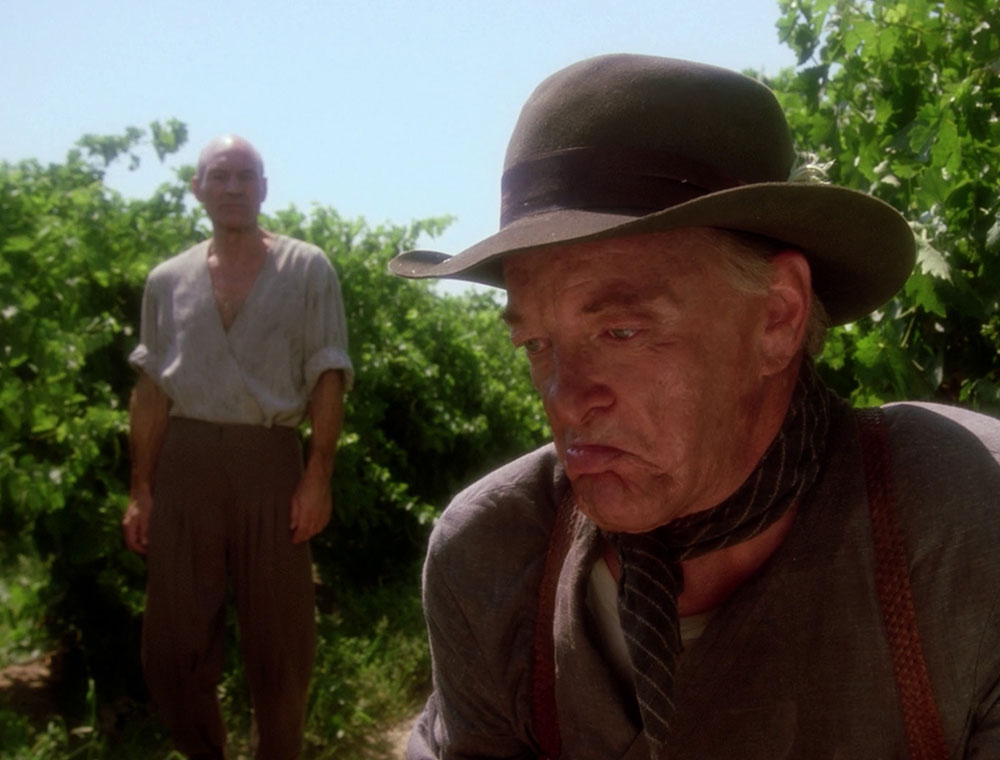 If there’s a setting – aside from the bridge of a starship – that really allows Picard and his principles to shine, it’s a courtroom. I’m of the school of thought that there’s no such thing as too much Picard ‘monologuing’ and “The Drumhead” is among the best of examples of it. An explosion goes off on the Enterprise and sabotage is suspected. The episode moves quickly through an extremely unnerving series of events that sees many crew members, including Picard himself, questioned and accused of treachery by a ruthless, Javert-like, Starfleet Admiral. Steadfast in his convictions and resolute in resolve, Picard never waivers and he and his principles ultimately win the day. Even though this is a story about Geordi and the relationship he develops with an injured Borg Drone, “I Borg,” is a key point in Picard’s overall arc. After giving orders to develop and infect the drone with a virus that could critically cripple the entire Collective, Picard begins to question the morality of using a young, wounded Borg as a biological weapon. Picard ultimately decides against it – much to his surprise and the ire of Starfleet. One can’t help but wonder, given the death and destruction the Borg would continue to inflict if our Captain would make the same decision twice? 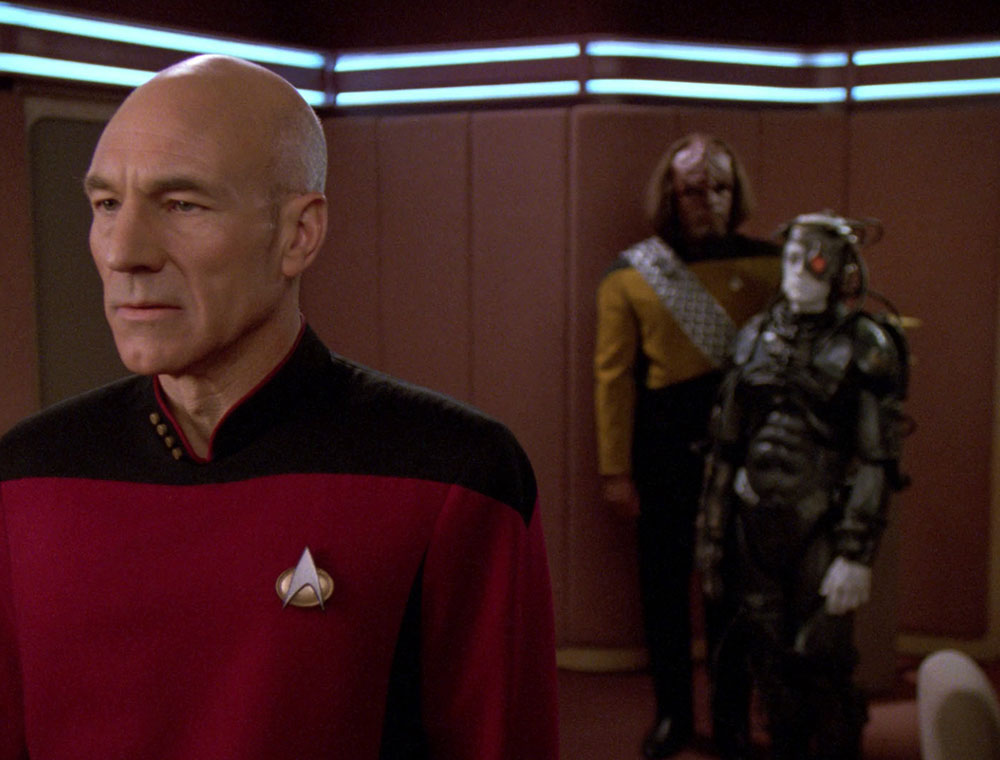 “Tapestry” is one of my favorite episodes of TNG. Picard basically dies and wakes up in an afterlife ruled (or at least managed) by Q. Q gives our Captain a chance to relive, and “correct,” past-mistakes – the key mistake being none other than a fight with a mean group of Naussicans during Picard’s defiant youth (the main story Picard told Wesley back in Season 2’s “Samaritan Snare”). Picard learns that he is, like all of us, the sum of his experiences and that that incident, along with others, ultimately made him the person he is. “Tapestry” is Star Trek at its best. If the beginning is a good place to start, then the end is a good place to finish. TNG’s finale is one for the ages. A perfect bookend to “Encounter at Farpoint,” “All Good Things…” sees our Captain travel back and forth through time – thanks again to Q – in an attempt to solve the mystery of how he could possibly be the reason for humanity’s annihilation. TNG’s last episode is a time-bending tale that perfectly showcases Picard’s resolve, determination, and his fidelity to both his crew and the principles of the Federation.

So what did you think of the above list? Is it worthy of your precious binge watching hours? Should I have included a Dixon Hill episode? How’s “Who Watches the Watchers” not on the list? What about “Captain’s Holiday”? “Chain of Command?” Let me and the rest of the TrekNews.net crew know your thoughts in the comments section below and on social. As always, thanks for reading and LLAP. 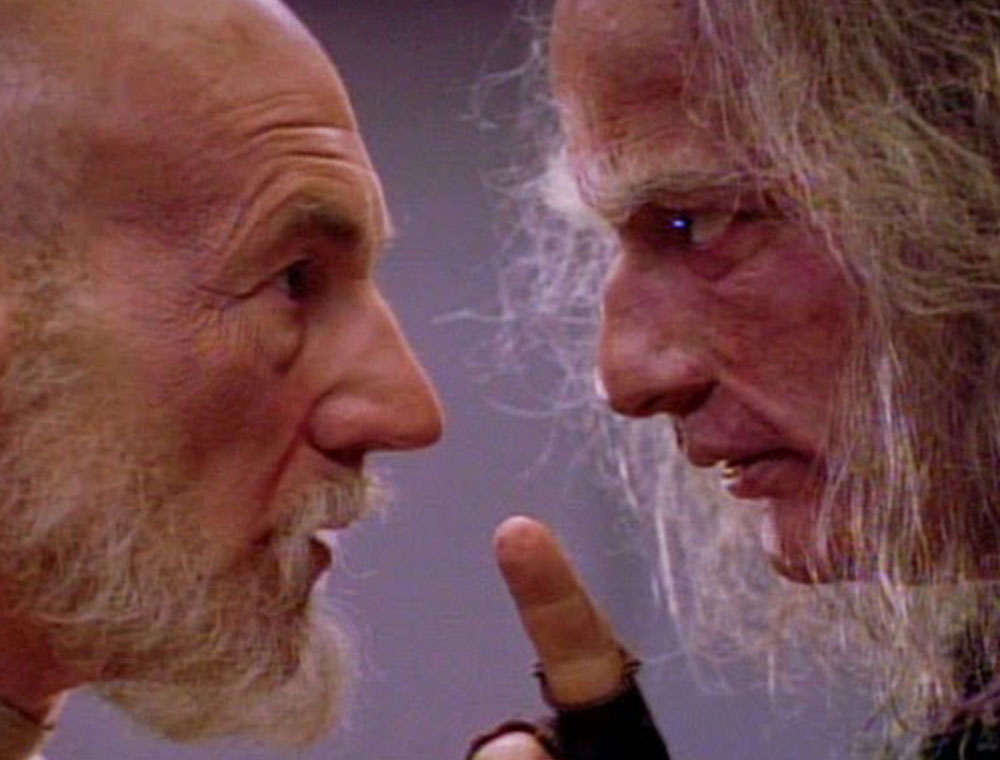 Stay tuned to TrekNews.net for the latest news on the new Jean-Luc Picard Star Trek series.