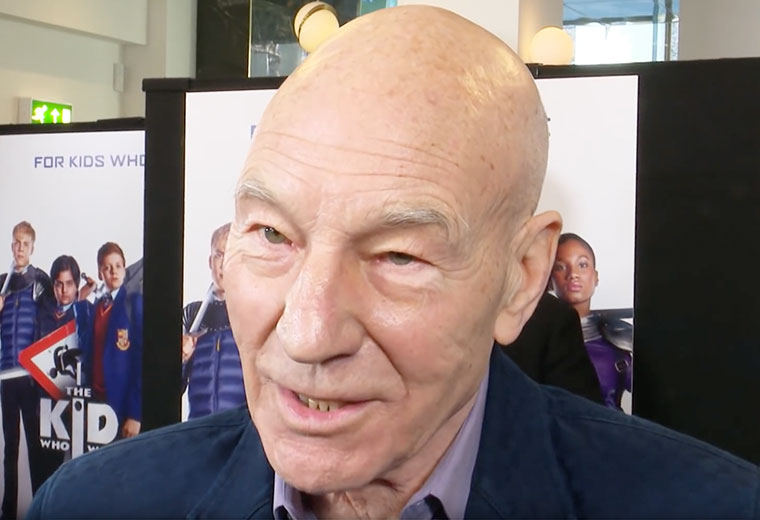 With the new Jean-Luc Picard series set to begin production later this year, Patrick Stewart discussed the new show, what he expects from it and if a feature film is a possibility.

Prior to the premiere screening of The Kid Who Would Be King in London, Stewart was asked by Red Carpet News about his process of playing aged versions of characters he played previously in his career, first with Professor Charles Xavier in Logan, and now with Jean-Luc Picard in a new Star Trek spin-off series.

I’m not aware that I’ve played a character older than myself—in that time—I hope that’s waiting around the corner.

He went on to talk about the new Picard series and how it will differentiate itself from the last time he played the Picard character on a television series, in Star Trek: The Next Generation, more than 25 years ago.

In returning to Star Trek later in the year, the one thing that will be different about this version of Star Trek is that we have simply moved a whole narrative 20 years from when I last wore Jean-Luc’s uniform. Everything has aged, and when the series gets released, you’ll see that things are much different than what they were.

Discussing the lasting impact both TNG and the Picard character has had on fans, Stewart said:

It gives me profound satisfaction what an impact my role—and the series—had on their lives. I’ve heard truly extraordinary stories about how people were affected by it. That makes me very proud for all of us that were part of it, because were were a great company… are a great company.

While the series is still in pre-production, fans are already asking if there will be a Picard-centric Star Trek film in the future. While that may be a way off, Stewart did confirm that they are hopeful that the new series will run for three seasons.

We are set up with possibly three years of this show, so if there is a film, it’s a long way off.