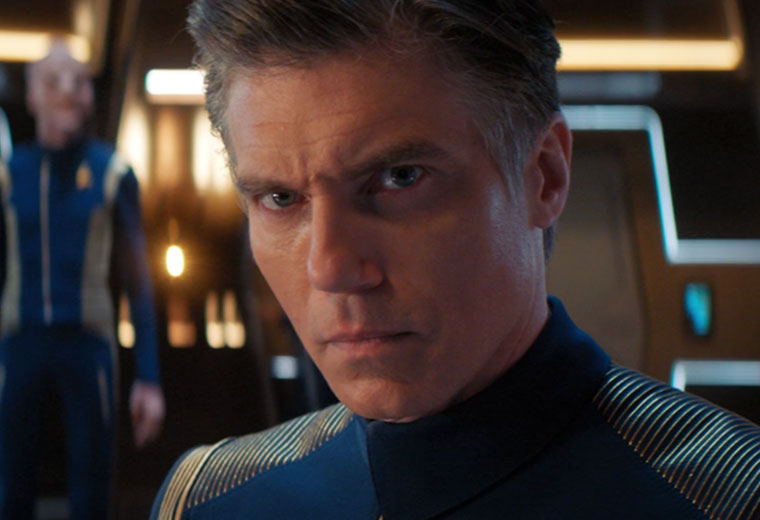 The latest episode of Star Trek: Discovery, aptly titled “If Memory Serves,” brings us Star Trek fan service in its best form – a trip back to the place where the entire franchise began: the first pilot for Star Trek, “The Cage.” While the events on Talos IV is the major point of “If Memory Serves,” this installment also moves some key subplots forward, making this a vital episode in season two.

Don’t worry – if memory doesn’t serve you about the events of “The Cage,” this episode begins in the best way: a “previously on” segment that uses footage directly from “The Cage.” It’s a wonderful throwback that sets the tone for what is essentially a direct sequel to that episode. And the segment ends with a chilling transition between Jeffrey Hunter‘s Christopher Pike and Anson Mount‘s, reinforcing just how well cast Mount seems to be. 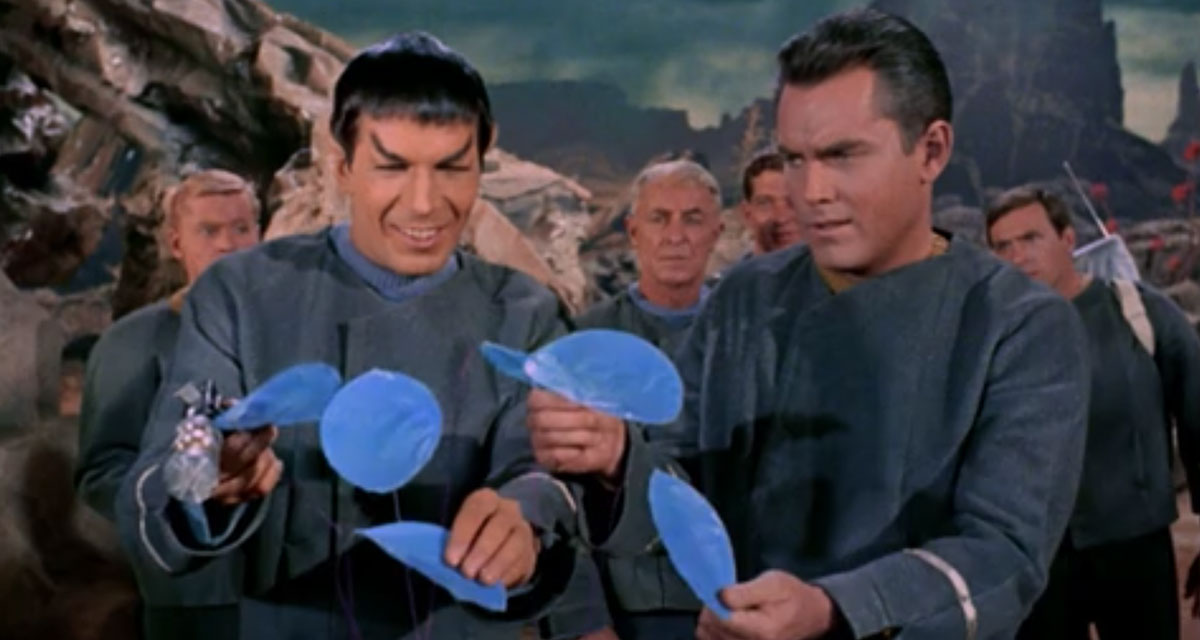 On Talos IV, Burnham and Spock encounter not only the Talosians, as previously teased from last week, but also Vina, played now by Melissa George, taking the role from Susan Oliver in “The Cage.” Bringing back this character is a sweet bit of fan service, and George seems like a great fit. Vina is still young thanks to the power of the Talosians, and we learn how she has spent her time since the Enterprise left the planet three years before. But even with an illusion of Captain Pike, who we don’t see in this episode, that hasn’t stopped her from missing the real deal. On that note: while we learn more about Vina, it’s a shame we don’t learn more about the Talosians. Indeed, no more background is given to the species or the individual Talosians we see than what we know from “The Cage,” which seems like a missed opportunity. 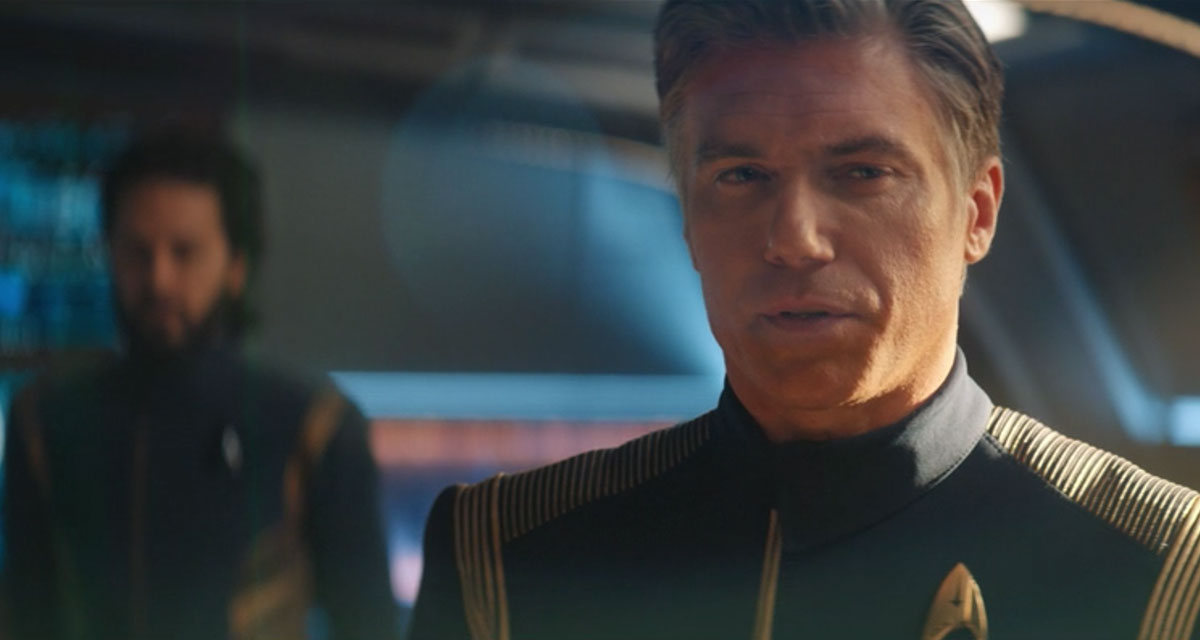 One of those Talosians we see is The Keeper, originally played by Meg Wyllie and voiced by Malachi Throne in “The Cage.” In “If Memory Serves,” the role is assumed by Rob Brownstein, and while it’s great to see the faithful yet modern look for Talosians, if the production crew intended Brownstein look like Wyllie, then they missed the mark. Based on his appearance, one would assume Discovery’s Keeper wasn’t supposed to be the same one from “The Cage.” Alas, other aspects of the Talosian’s remain faithful, including the general look at their planet, some of the fantasy-esque sound effects announcing their arrival, and their telepathic communication. 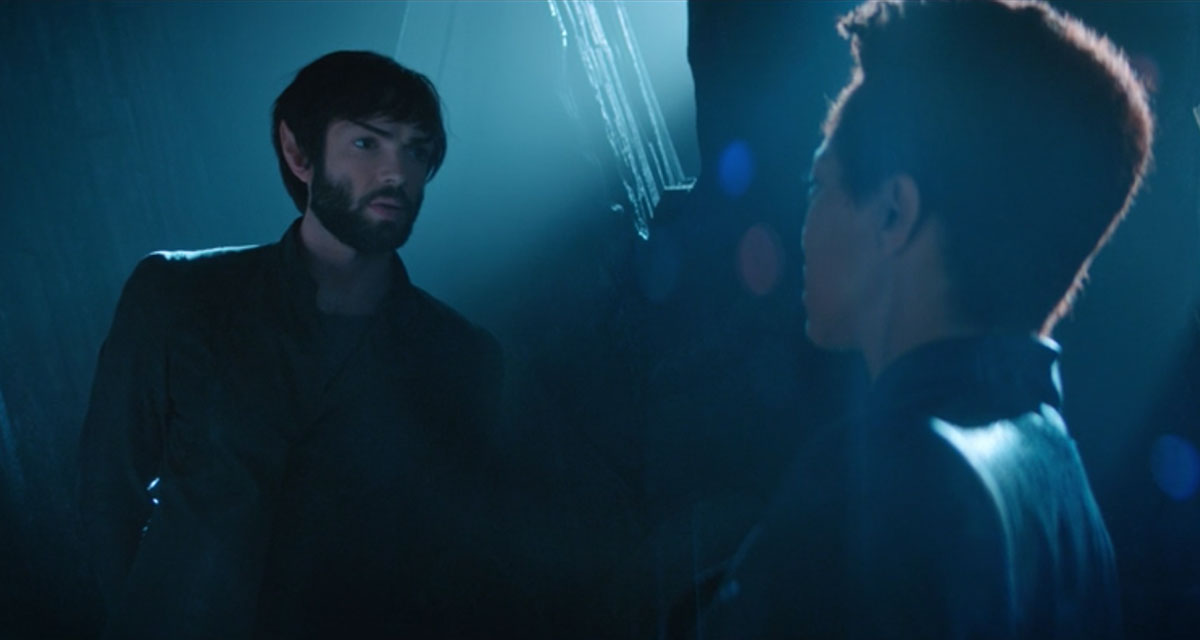 In any case, the reason why Burnham and Spock visit Talos IV is to help fix Spock’s mental status. Thanks to the events of “The Cage,” Spock knows the Talosians are able to use their remarkable mental powers to effectively “fix” him. And in the process, an important plot point regarding Burnham and her brother is revealed: why exactly they remain on bad terms. As it turns out, Burnham, in an effort to distance herself from Spock for his own protection, insulted him egregiously, calling him a “half-breed” and a “freak” due to his mixed heritage – certainly a damaging moment for a little boy. Indeed, we now know this is the motivation behind Spock embracing stone-cold logic in adulthood. 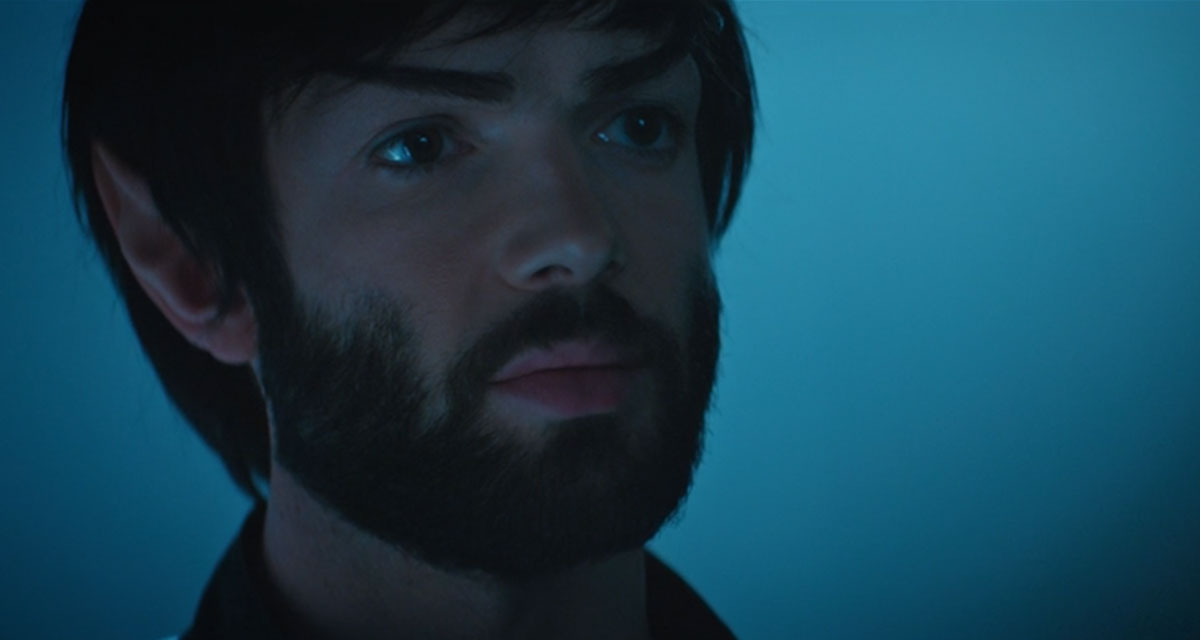 It’s in this episode that we see Ethan Peck as Spock proper, instead of a Spock trapped inside his own mind. The results are fantastic. Peck channels the pose, gravitas, and personality of Leonard Nimoy in an instantly recognizable way. With Spock now on Discovery at the end of the episode, and in a normal state of mind,  it’ll be great to see him interact with people in a more familiar environment – a Federation starship. 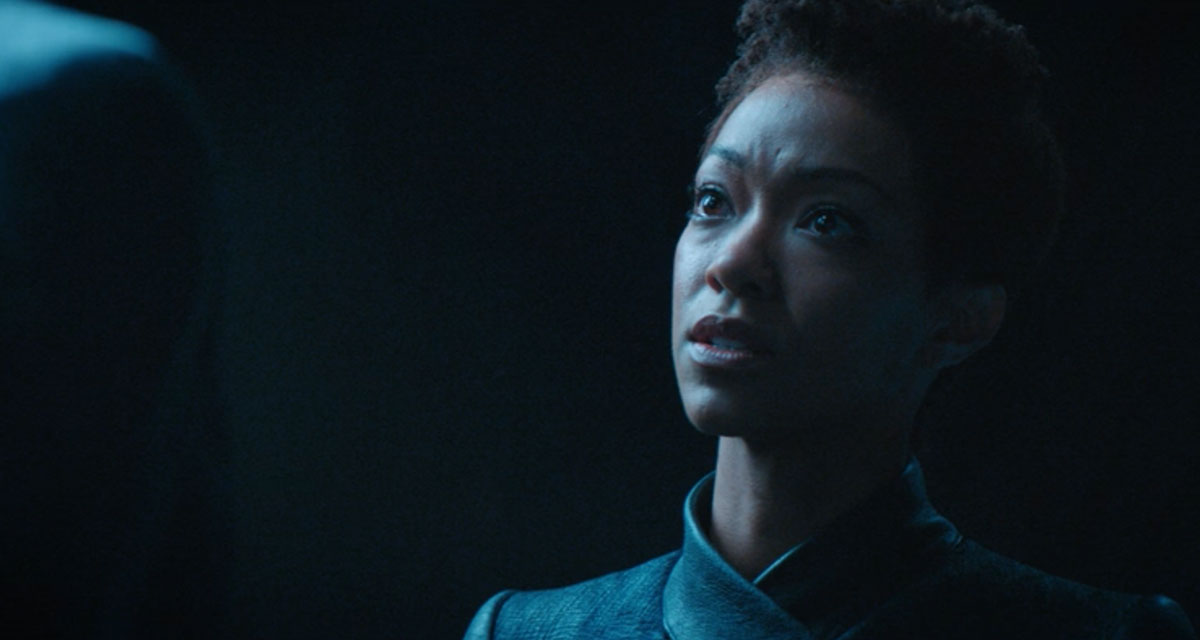 Still on Talos IV, the reveal of the history between Spock and Burnham is handled to great effect thanks to director TJ Scott seamlessly switching between the young siblings and their adult counterparts. Who can’t feel sympathetic for Spock when young Liam Hughes handles the scene so well, and we immediately see the emotional trauma in the older Spock’s eyes? The same goes for Sonequa Martin-Green and  Arista Arhin. While the actual reason for Spock and Burnham’s conflict isn’t too groundbreaking, what is vital is the revelation that the Red Angel – who we now know is human – actually saved young Burnham’s life on that night.  The mystery deepens! 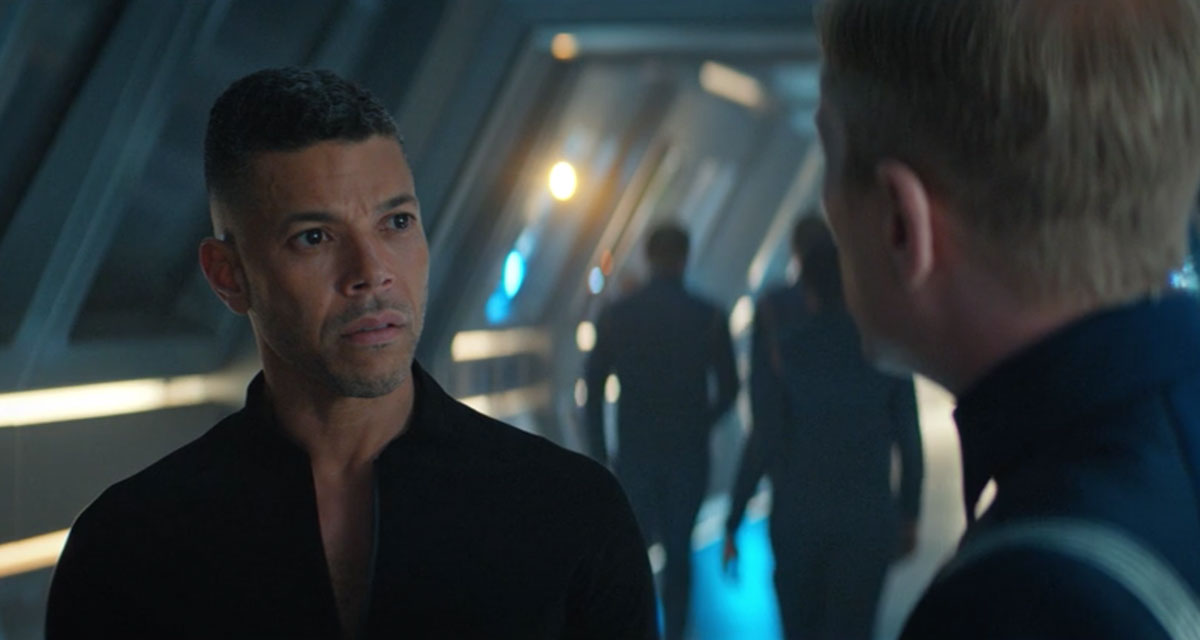 Other relationships are addressed at length in this episode. We see the continuing fallout of Dr. Culber’s return to the living, and how drastically that has impacted his personality. He’s angry, confused, and willing to lash out at anybody, especially his partner. These emotions aren’t something we’ve seen from Wilson Cruz‘s character thus far, so the change is intriguing. Will Stamets allow his partner to further distance himself?

Equally intriguing is Culber’s confrontation with the man who killed him, Ash Tyler. In a bit of uncharacteristic aggression, Culber provokes (pro-Voq?) a fight between them. Looking on, Saru wisely lets it happen, as the tension between the doctor and Tyler is impossible to ignore. It’s nice to see Shazad Latif get more material to chew on, as so far this season this character has largely been in the background, a shame considering his standout performance in season one.

And finally, we are slowly learning more and more about Section 31 – the main piece of info here is that the organisation is seemingly controlled by “Control,” an artificial intelligence. This is quite the hook and it will be intriguing to see how much more this season expands on this, or if it’s all a tease for the upcoming Section 31 series.

7 Things I Loved About Star Trek: Discovery Season 3… And A Few I Didn’t [Op-Ed]