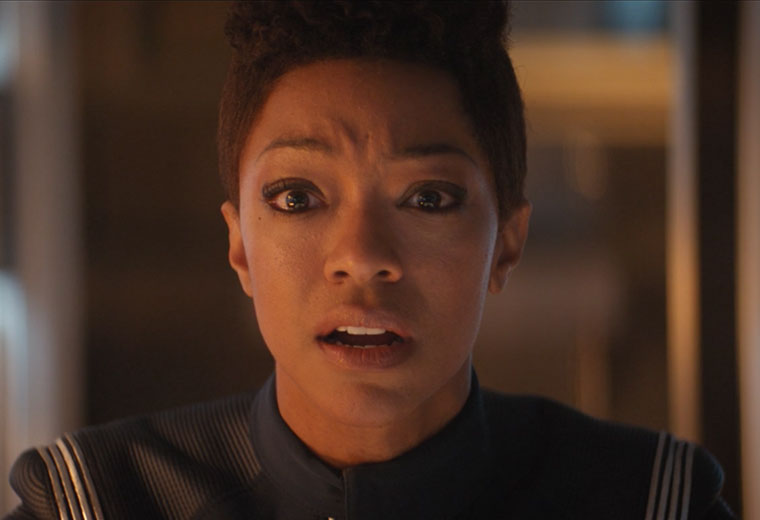 “Perpetual Infinity” amounts to a great Star Trek: Discovery episode that efficiently moves this season’s major plot forward, while helping us gain a clearer and overdue understanding of the season’s main antagonist. Let’s dive in. 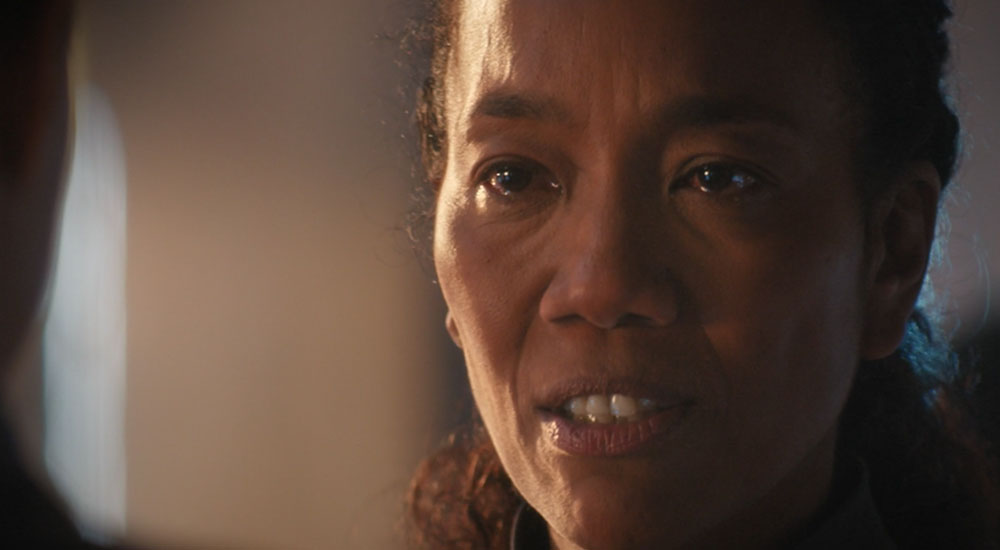 The fallout of the reveal that the Red Angel is actually Michael’s mother, Gabrielle, is the centerpiece of this week’s episode. We learn more about what happened to Gabrielle after the Klingon attack on Doctari Alpha through a series of video logs – conveniently captured by the Red Angel suit’s detachable, uh, drones? Sure, why not? It would be difficult otherwise to dramatically portray Gabrielle’s predicament , and as the sole carrier of these scenes, Sonja Sohn adequately preforms the character’s controlled desperation of being trapped in space and time.

But it wasn’t as if Gabrielle was fully isolated from her own time. Indeed, after escaping the Klingon attack, she accidentally jumped 950 years in the future, the 32nd century, but was able to return to different points in time at the cost of being pulled back to the 32nd century – the “anchor” we’ve heard referenced before.  So, she was able to view her daughter’s various trials and tribulations, acting as a literal guardian angel. Easily the most touching part of “Perpetual Infinity” was at the end of the episode, when Gabrielle was explaining all this to Burnham – for once dropping the detached, stoic time traveler routine and finally acting like Michael’s mother. 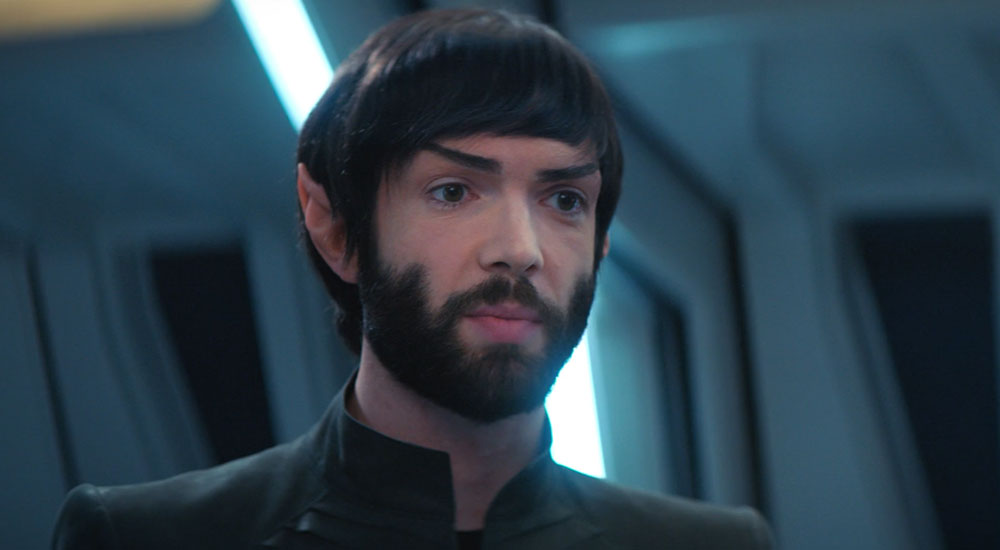 To prevent Control from evolving using the information from the sphere found in “An Obol for Charon,” the crew devises a way to trap the information in the suit and send it to the future on a never-ending loop back and forth between two points in time, a place where Control could never get it. Hence the episode’s title. The sequence where Pike, Spock, Burnham, Tyler, and Saru figure out this plan – using dark matter as found in the first episode of the season – is a fast-paced and sensible scene, punctuated at the end by a great delivery from Ethan Peck’s Spock, saying simply, “I like science.” Discovery, more so than other Star Trek shows, has a fantastic ability to walk the line between pseudo-science and real-world science, and this episode shows this quite well. 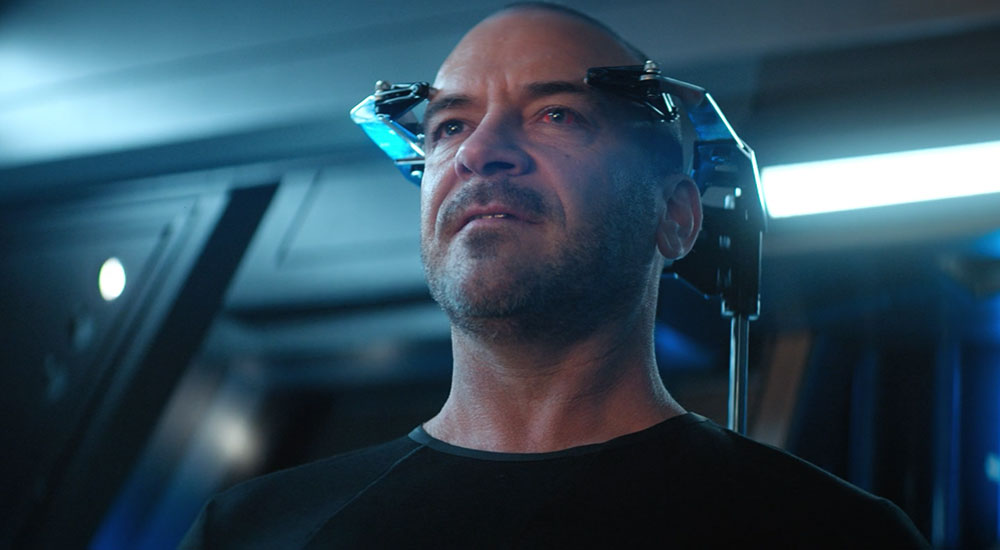 Alan van Sprang as Leland facing off against Control.

Meanwhile, on the Section 31 ship, Leland is captured by Control after being infected by the worst eye exam ever – although how he got from withering on the ground to being strapped to a chair is unknown at this point. In any case, Control now is able to manifest itself as a holographic image, a long overdue visualization for what amounts to this season’s main villain. Leland, now under Control’s influence, embarks on a plan to sabotage the Discovery’s efforts to use the Red Angel suit, as Control knows if Discovery’s mission is successful, it can not evolve. However, an eagle-eyed Ash Tyler (Shazid Latif) and Philippa Georgiou (Michelle Yeoh) recognize the change in Leland, and ultimately discover he is indeed not himself.

While Tyler gets the short end of the stick (more like the sharp end of the knife) when confronting Leland, Georgiou has a chance to show off her fighting moves again, as she buys Michael and company enough time to prevent Control from obtaining the time suit – at the expense of sending the suit and Gabrielle back into the future. As for the fight scene in this episode: the more we see Yeoh on screen, the more we think she is going to be a great lead for the upcoming Section 31 series. 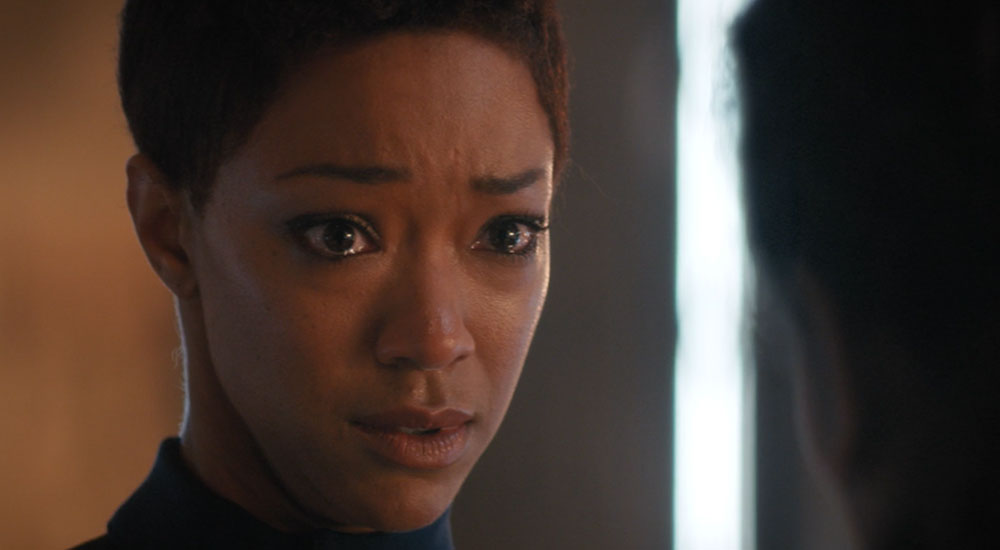 Like “The Red Angel” before it, “Perpetual Infinity” is also a great showcase for Sonequa Martin-Green. From learning of her mother being alive, to finally seeing her, to facing the cold shoulder as Gabrielle lives with her unique time traveling situation, to finally connecting with her mother just before losing her again. It’s a spectacular range of emotions to juggle, and while Martin-Green has never disappointed us during Discovery’s run, her performance in this last two episodes is truly outstanding.

“Perpetual Infinity” leaves us with another major question: if Gabrielle isn’t the one creating the red bursts, who or what is? And will Michael ever see her mother again? There’s still plenty of time for answers, as the season still has three episodes left, starting with next week’s “Through the Valley of Shadows.”