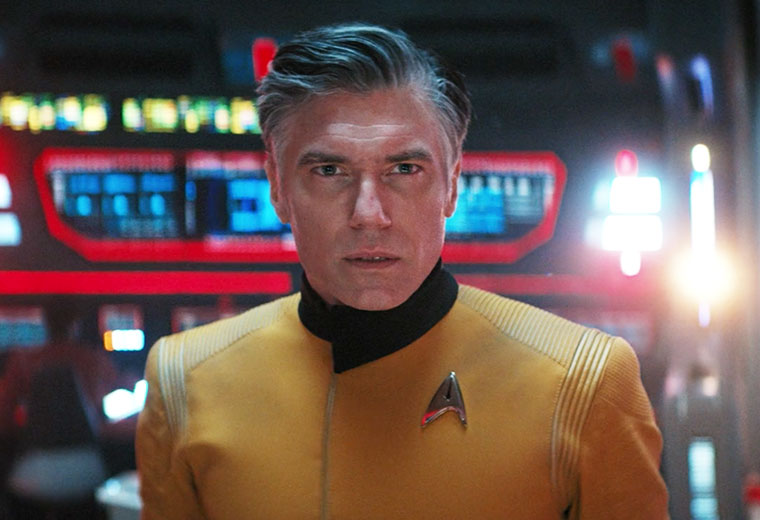 There we have it. Watching the curtain close on season two of Star Trek: Discovery has indeed been a sweet sorrow, but if the first part of the season finale was slow and melodramatic, the second part was a brilliantly paced, action-packed affair that answers some of the most pressing questions fans have had about not just season two, but the show itself.

Since the show’s inception, fans have asked how Discovery fits into Star Trek canon, and we finally know the answer. While it isn’t the most creative solution, it is perhaps the most sensible. Instead of some time-travel trickery and resetting the timeline, as we’ve seen with too many Star Trek episodes, the people surrounding the events with Discovery, the Red Angel, and Section 31 have been sworn to secretary. They will never mention the ship, her crew, or the events she was apart of, or face treason. 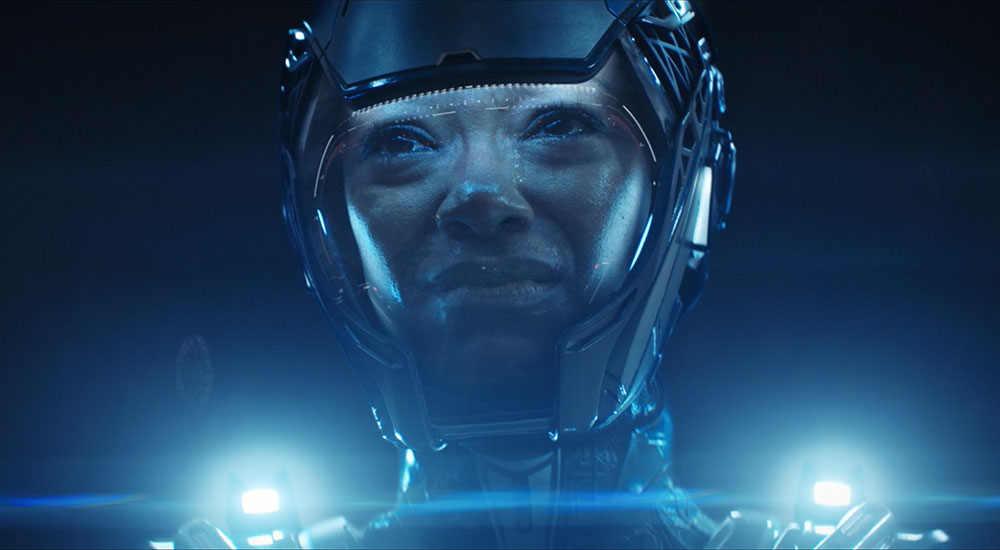 So what happened to the Discovery herself? Well, the reason we don’t see the ship or the crew anywhere else in Star Trek is because, simply, they are gone. As planned, the crew, led by a Michael Burnham (Sonequa Martin-Green) outfitted in a time suit, was led into the future to prevent Control from obtaining the sphere data and thus becoming sentient. “Such Sweet Sorrow, Part 2” relates the way the ship got there with style, high-stakes tension, and just the right amount of emotion. On the surface, this episode looks like a movie, and we’re genuinely interested just how much this 70 minutes of television cost to produce. The Discovery and Enterprise, armed with hundreds (yes, hundreds) of support ships, face off against Leland’s Section 31 ships. Here’s where we have to be nitpicky: while it always brings about a child-like excitement to see a Star Trek space battle, the idea that two Starfleet ships have the physical space to hold all those support craft is hard to get over. Clearly, it’s an excuse to have a massive, chaotic battle scene – but considering the reinforcements that heroically come and help save the day, couldn’t they have provided the necessary numbers to showcase a huge battle?

In any case, the arrival of the Klingons and – defying everybody’s predictions, the Kelpians – was certainly a highlight of the episode. Their arrival helps put a bow on both species’ respective story arcs, and it was particularly touching to see the Kelpians, led by Saru’s sister and recently freed of their over-cautiousness, come to the fight. Seeing another Klingon cleave ship after its sole appearance in the series premiere was a great callback, and we finally saw, albeit briefly, the new D7 Klingon ships in action. 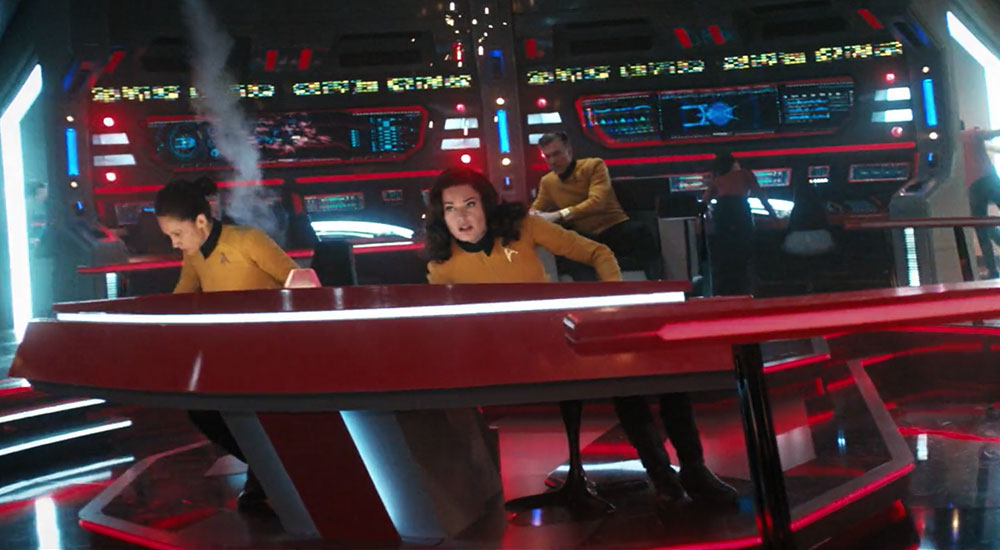 The Enterprise crew in the midst of battle (CBS)

But this is all easy praise stemming from what was surely a blank check to the VFX department. The real heart of the episode comes through our characters, and the best place to start here is with Michael and her foster brother. The pair discover together the solution to the Red Angel mystery, and what Michael has to do – and where and when she has to go – to finally complete her mission. Through some amazing, mindbending visuals that convey Michael’s journey through time and space, we see her appear just where we saw the Angel appear throughout the season – but now most importantly, why she appeared in those places. In this respect, the payoff for the season-long mystery is expertly executed. Each signal appeared where it did because at that location was an element that would help Discovery in its final battle with Leland. From having Jett Reno (Tig Notaro) and Po (Yadira Guevara-Prip) onboard to help with the time crystal, to having a place to call home when Discovery is in the future, to having the Kelpians able to come with reinforcements, these elements came together in the final standoff. But, that only accounted for some of the seven signals, didn’t it?

In the episode’s final minutes, we learn where the two last signals must appear. First, Burnham, surrounded by a divine red light, leads Discovery through the chaos of battle and into the time rift. This is a visually breathtaking sequence, with Discovery‘s upward flight to the rift a neat echo of part of the show’s title sequence. And then the ship gets there, and is gone, with not a word from the Discovery crew. But as Michael promises Spock, the last signal appears months later, as she lets her brother know that she and the crew are safe. But beyond that, we have no idea what happened to the ship. 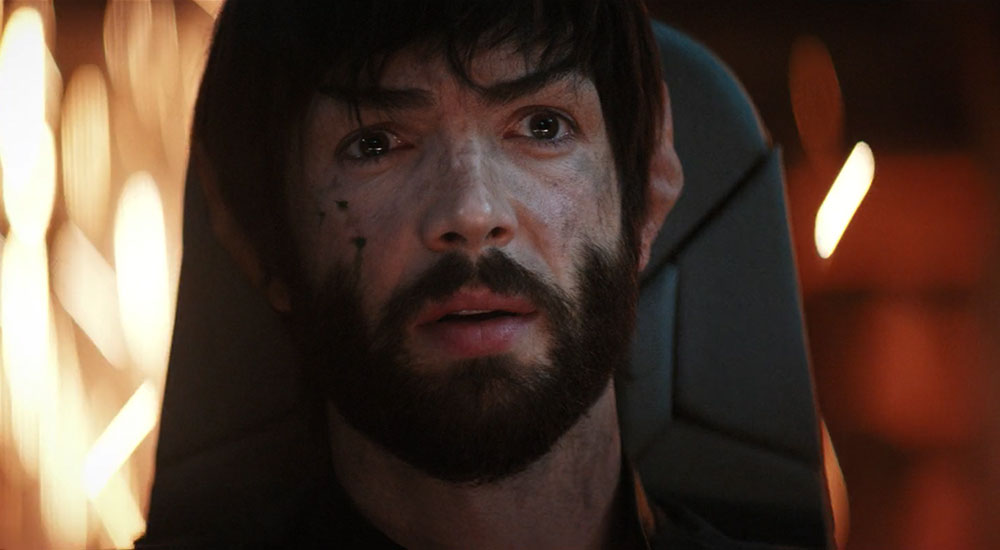 Before Burnham can lead the Discovery into the future, though, she faces an unexpected goodbye to her foster brother. And her parting advice to Spock is prophetic. Essentially, he must find his opposite, the person most unlike him, and allow that person to help him grow and become who he is meant to be. I think we all know who that person is. It’s a great transition into The Original Series on its own, and with the appearance of a clean-shaven, bowl-cut Spock at the end of the episode, it’s the conclusion to Discovery that we always pictured. We wouldn’t be too disappointed if this was the end of the series, not just season two. But, considering it looks like Discovery is in a faraway place and time, this might as well be the way the show ultimately hands off to The Original Series. 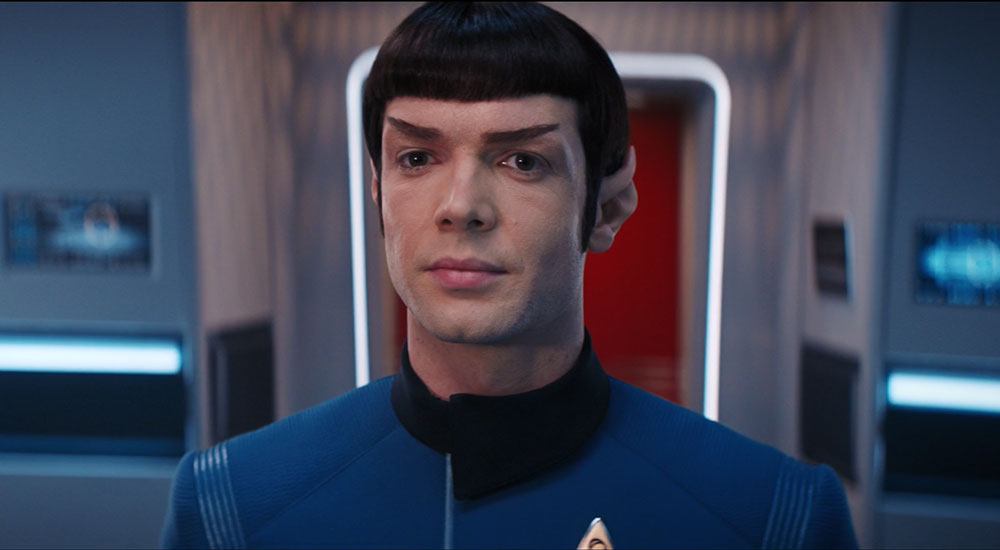 Right now, we have little information on season three save for one key fact: we are staying in the 31st century, as confirmed by showrunner Alex Kurtzman to the Hollywood Reporter. This means that because they are stuck hundreds of years in the future, Discovery has the ability now to really settle into its own, and not worry about stepping on the heels of Star Trek canon. The wait for season three will be long, indeed.