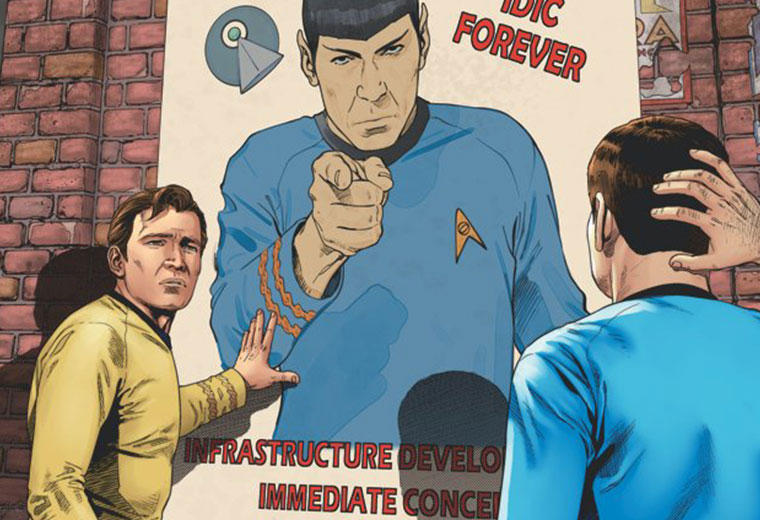 The trinity from TOS – Kirk, Spock and McCoy – land on a planet in the midst of a political crisis. So, of course, logic dictates, at least to Spock, that he run for president. What could possibly go wrong? 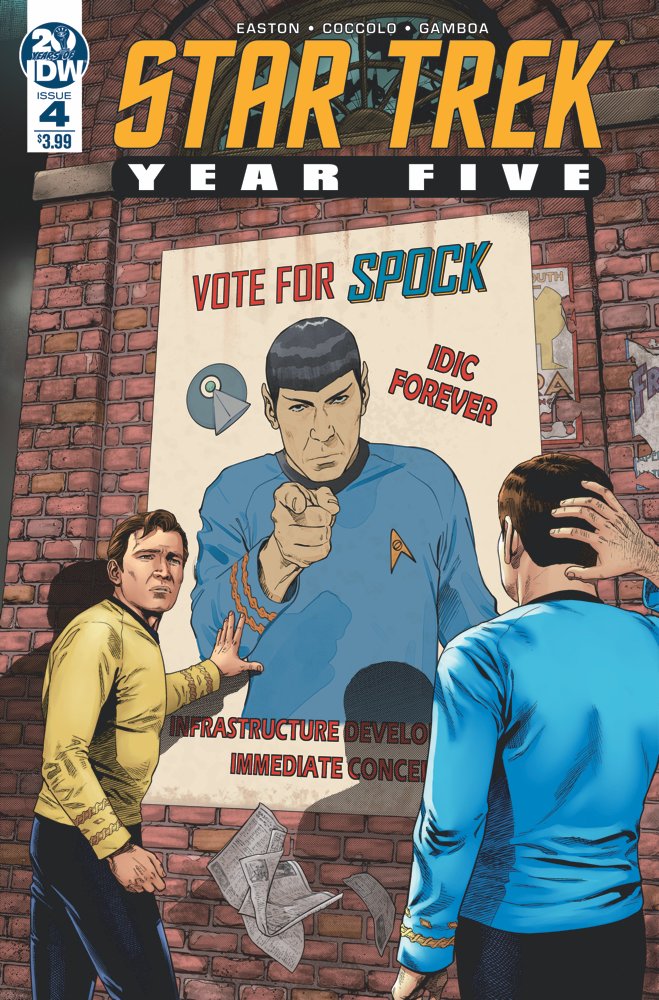 A few months before the series began, details emerged about the writers room meetings for this series. It was surprising to see this development, a process much more synonymous with TV shows and movies, for a comic book series. Surely, whatever they were planning had to be big.

Four issues into Star Trek: Year Five and it is hard not to glimpse into the real magnitude of what is being given to us. This is not just another Trek comic book. The creatives are determined to make this a true continuation of The Original Series we love and cherish in every way. If the quality we have gotten so far in writing and art continues, by Kahless, I think they’ll succeed.

Year Five is promoted, of course, as the conclusion to the five-year mission of the Enterprise. But from the first page of the first issue of this series, it is clear that the term conclusion here has much deeper and grimmer undertones. There is a backward time jump from page two on in that issue, thankfully, and we watch the crew diffuse a pressure cooker situation with the Tholians. Upon learning of warp tests, they return to a Sigma Iotia II which has now changed significantly, thanks to a communicator accidentally left by McCoy, from the gangster society we saw in A Piece of the Action. After accessing information about earth’s history through the communicator this society discovers that democracy is the answer. But while they see the goal, the Iotians are on a dangerously simplistic and unpredictable path to implement this form of government. 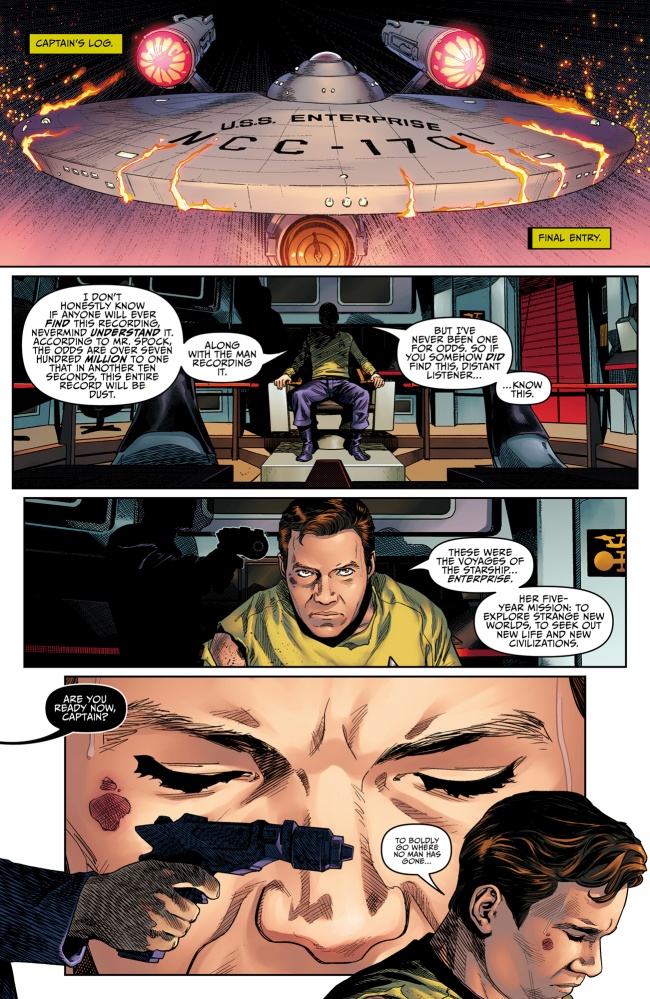 Their approach to keep governments in power only for weeks has caused a backlog of issues yet to be addressed and a deeply dissatisfied population stuck in an endless loop of actions. To address this Spock sides with the Astro Liberation Party, a group whose goal is to dedicate all resources to hastening space exploration, much to the confused chagrin of Kirk, McCoy and the ruling government. Things only get worse when they learn of a space station in orbit facing critical problems.

The Enterprise could help if its crew wasn’t caught in a mutiny. On one side is acting captain Scotty who is trying his best to help a Tholian child the crew rescued during their crisis with the Tholians. On the other is a part of the crew that holds the Tholians responsible for past crises and is set to get the child off the ship, even if they have to go through Scotty.

Continuing this issue is Brandon Easton who took over the reins from Lanzing and Kelly with the last issue. This round robin approach to the series is working well so far. It’s clear every writer on board all have a strong knowledge of who our crew is and what they represent. With each crisis the writers are showing us different shades of the characters while keeping them true to who they are. Easton, by utilizing a political crisis to showcase so many hard truths about what is wrong in our current political system (the second caption in the panel above, for instance, is an especially resonant one), understands that at its core what Star Trek is: a mirror. It is not just a trek outward, it is a trek inward.

That doesn’t stop him, however, from keeping things interesting and exciting. The action goes from tight spaced to dropping us in literal space. The dialog is true to Trek too. Long, exposition filled monologues, sequences full of characters pontificating and running into revelations. That is what I like most about this series. While other IDW series succeed by taking us to new frontiers both in content and style, Year Five takes the skeletal framework of TOS and works hard to find new places to go intellectually and emotionally. I’m dreading what is in store for our crew, what leads us to that ominous first page of the first issue, but if the journey is going to be this uplifting and emotionally packed, that helps quell my fears some.

To no one’s surprise, Martin Coccolo is nailing the art. There is a similar round robin approach here, with Martin taking over for Stephen Thompson, who has stayed on board as the cover artist for the issue. Martin reminds us that even on distant planets, during elections we humans crave podiums, crowds and colorful banners. There are many panels of close-ups of Kirk, Spock and McCoy and that is where he especially shines. Thanks to him and colorist Fran Gamboa, the images come to life and take you back to the charming sixties television style of the series. 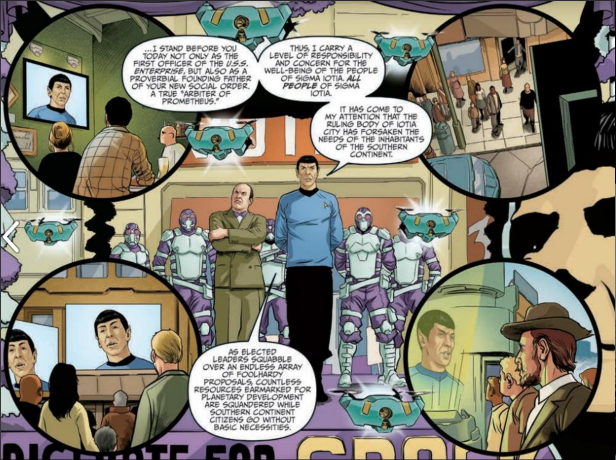 The issue with this series is, perhaps fittingly, the issue that some might have during their TOS rewatches. The story is captivating but the stylistic choice to fill every page with packed dialog bubbles and caption boxes comes at a bit of a cost. The less dialog, more action route that IDW Trek veteran Mike Johnson takes with his Boldly Go or Discovery series, for instance, is definitely not the case here. Year Five seems, at least for the moment, to stubbornly cling to the multiple page, often stretched out dialog bubble chain style, even if it means making it feel a bit laborious at times. There is enjoyment to be had here in spades but there is a balance between dialog and action in comics, and Year Five is trying to get there, but there are just so many words in the way!

That is a minor complaint, however, and one easily forgivable, when you look at the big picture. Artists who love Trek with all their heart are telling stories that are true to its spirit. Year Five remains the finest in that regard. How dare I complain? 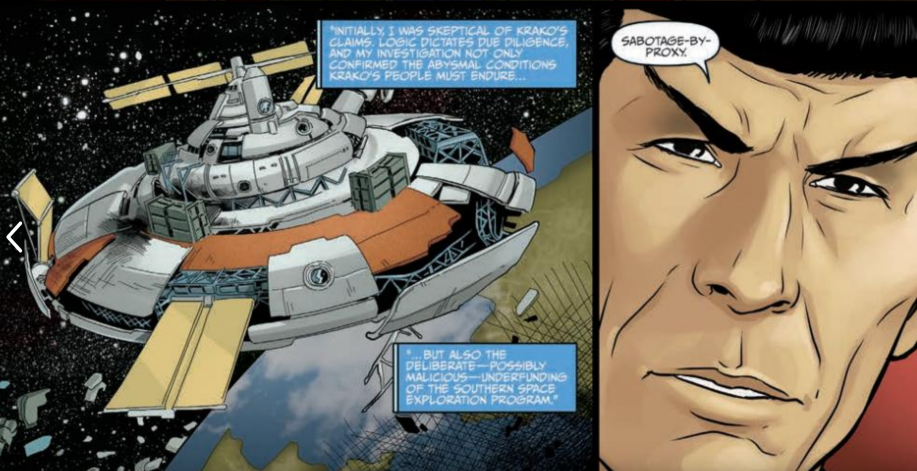