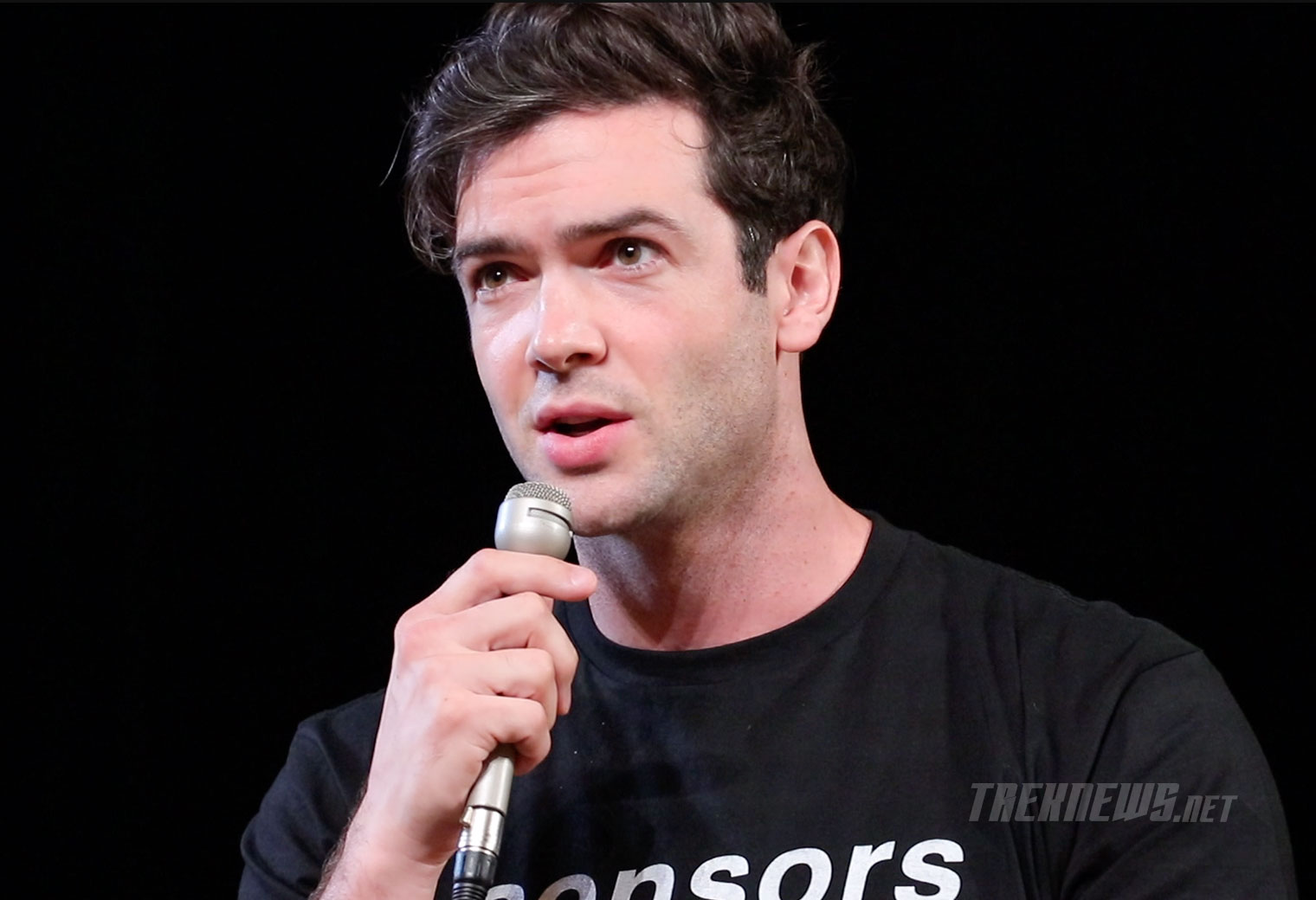 Ethan Peck appeared at the fifth annual Trekonderoga convention in Ticonderoga, New York over the weekend and discussed a myriad of topics related to Star Trek: Discovery and his portrayal of Spock in the series. The 33-year old actor revealed his initial reaction to being cast as Spock, the online controversy around Spock’s beard and his hopes for an Anson Mount-led “Captain Pike” series, during his hour-long solo panel in the Ticonderoga High School auditorium.

Peck joined the cast of Discovery for the series’ second season to play the iconic role of Spock, made famous by Leonard Nimoy in The Original Series, and later portrayed by Zachary Quinto in the “Kelvin Timeline” trilogy of films.

During the Q&A, Peck was asked if his Spock makeup is comfortable, he answered with a smile, saying:

“No. Well, parts of it are. The ears actually the most comfortable part of it all.”

He went on to describe how the makeup department on Discovery uses thin prosthetic “eyebrow blockers,” as opposed to actually shaving his eyebrows in the Vulcan style:

“They had to completely block out my eyebrows because of a contractual situation for me. I’m not sure they thought I was going to work. So they were like ‘probably five episodes,’ and I took that to mean that they were rolling the dice with me a little bit. This is a such a special character that is special to so many people… and I totally could have cracked and crumbled under pressure — and I thought I might, too. So they had me episode-by-episode and to do this (shaving his eyebrows) would really take me out of other work opportunities.

So, hopefully… Anson (Mount), Rebecca (Romijn) and I are all hoping to have a spinoff of our own and we can do all this proper.” 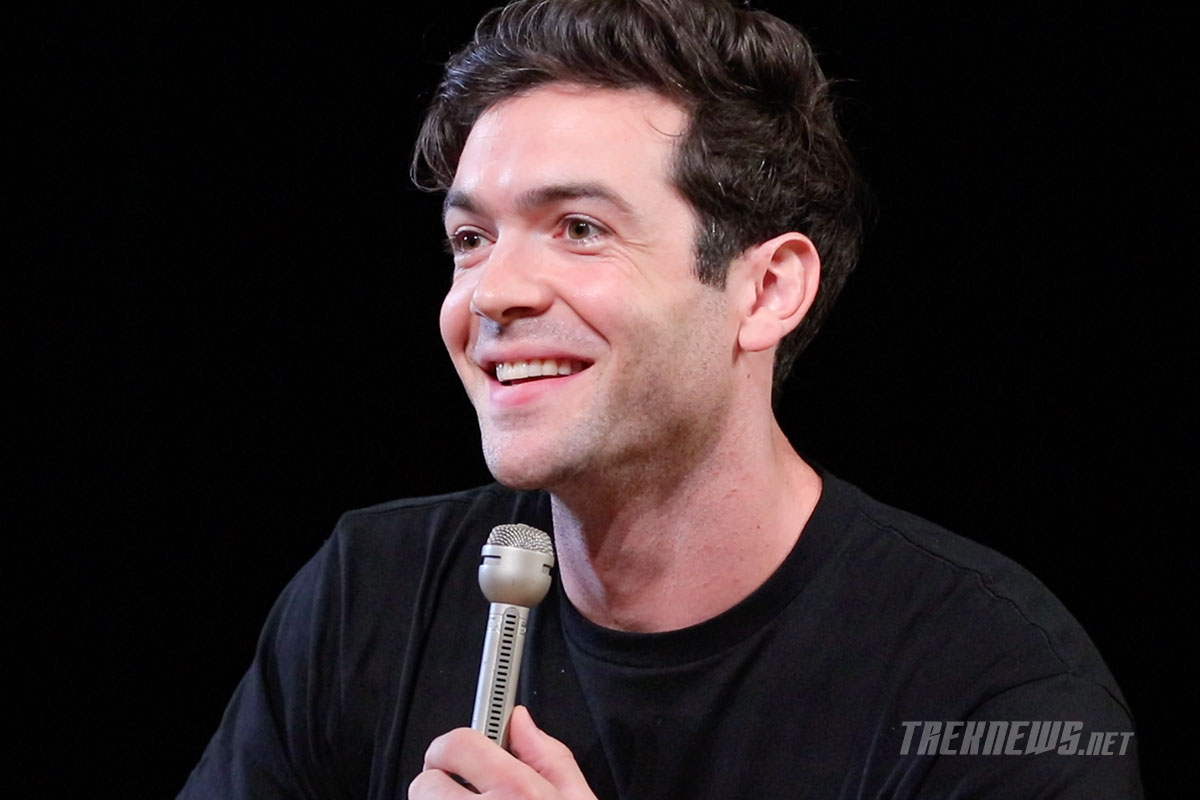 Because of the layers of makeup that need to be applied and the amount of detail, Peck revealed just how time-consuming it can be:

“It’s quite the laborious and detailed-oriented process. It actually takes longer than (Doug Jones) Saru’s makeup… by like an hour.”

Peck was asked if was a Star Trek fan prior to joining the cast of Discovery. He disclosed that he grew up as a big science-fiction fan — especially the work of Isaac Asimov, including The End of Eternity.

“I’m becoming more of a Trekkie — I just started watching DS9. I actually have a buddy of mine who is a diehard Trekkie and I always text him every shirt I get made for these conventions.”

Peck was later asked what informs his performance as Spock and described how he prepares to take on the role, prior to filming:

“I took it deadly seriously, obviously. It meant so much to me to be chosen for the role. I didn’t know what I was getting into when I first auditioned for it—I knew it was for Star Trek. By the end of the process, it was revealed to me which character it was and I was so flooded with fear because of the expectations of this character, of the role and the actor that would play him. It was a very meticulous process. When I’m sitting in prosthetics, I’m beginning to have ‘Spock thoughts,’ is what I would call them. Just sort of thinking about… What does it feel like to be on the ship? What does it sound like? What does it smell like? What is it like to be away from your whole planet?”

When Peck was revealed as a bearded Spock in the second season trailer for Discovery, it spurred quite the controversy online. The actor discussed his character’s facial hair and his initial reaction to it.

“The beard was my own. About a month before I went out (to start filming), Alex Kurtzman, the showrunner—who became the showrunner as I joined the show—he was like ‘don’t shave.’ When he told me that Spock was going to have a beard, I was like ‘Oh, shoot. I’m going to be Spock with a beard, people are going to absolutely smash me online. And of course a lot of people did—which is is fine, it’s to be expected. People are going to think what they’re going to think, and  can’t control that. So I just do my best. And I thought it’d be gone in an episode or two. I think Alex liked it so much, and   I think they were still developing the end of the season in the writer’s room, when I joined. It stayed… and I’m so glad it did.

I remember we were at dinner in New York for New York Comic Con—it was the first time I had appeared since I had been cast and I sat next to him, when he told me about Michael (Burnham) leaving and putting a nice little bow on her non-existence for cannon, and he told me I would walk out shaven and we would be on our way (aboard the Enterprise).” 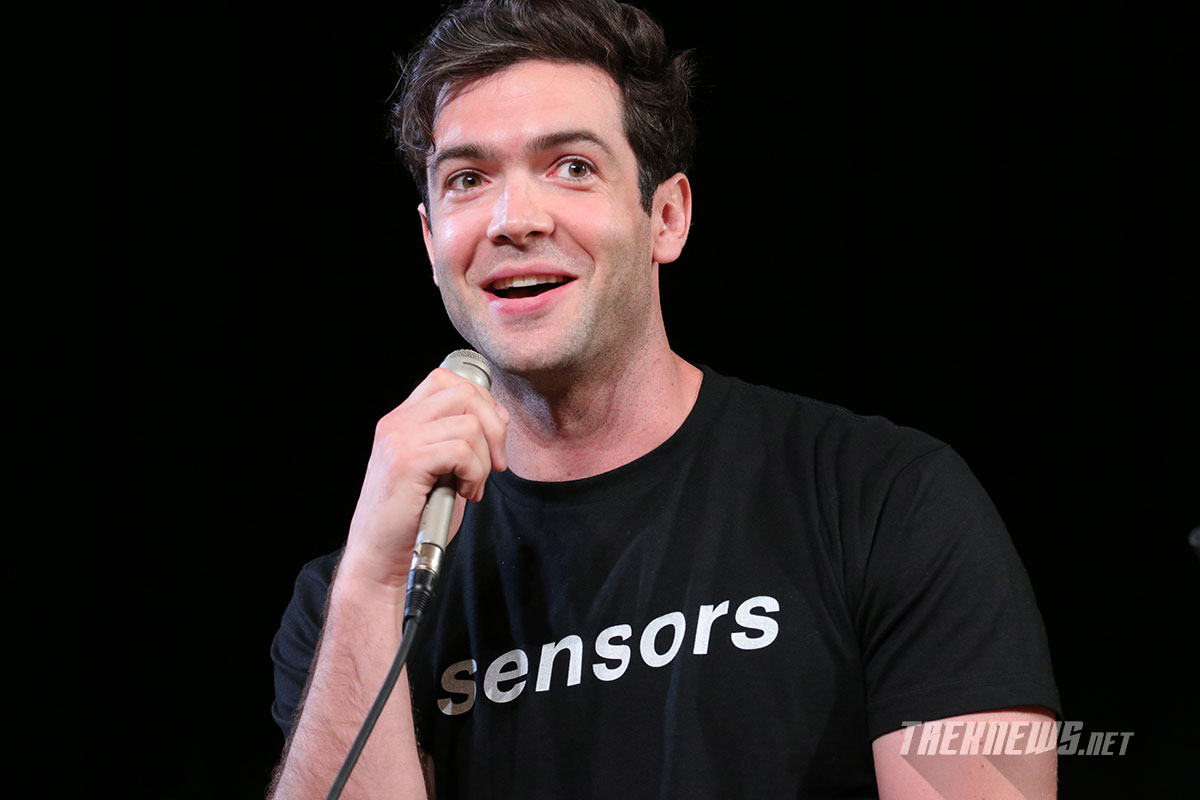 Peck went on to discuss his life and career thus far:

“I’m really lucky. I’m insanely lucky. I come from this incredible acting family. My grandfather was an actor (Gregory Peck)… I survived a crazy motorcycle crash about ten years ago, and then I got cast as Spock after I almost quit acting. That’s just layer upon layer of unusual living. The older I get the more I’m feeling like I’m living in a dream. I feel very very grateful.”

On what he’d like to explore with the Spock character, Peck said:

The TrekNews.net team was in Ticonderoga over the weekend, so check back soon as we’ll have more articles and photos from the event.