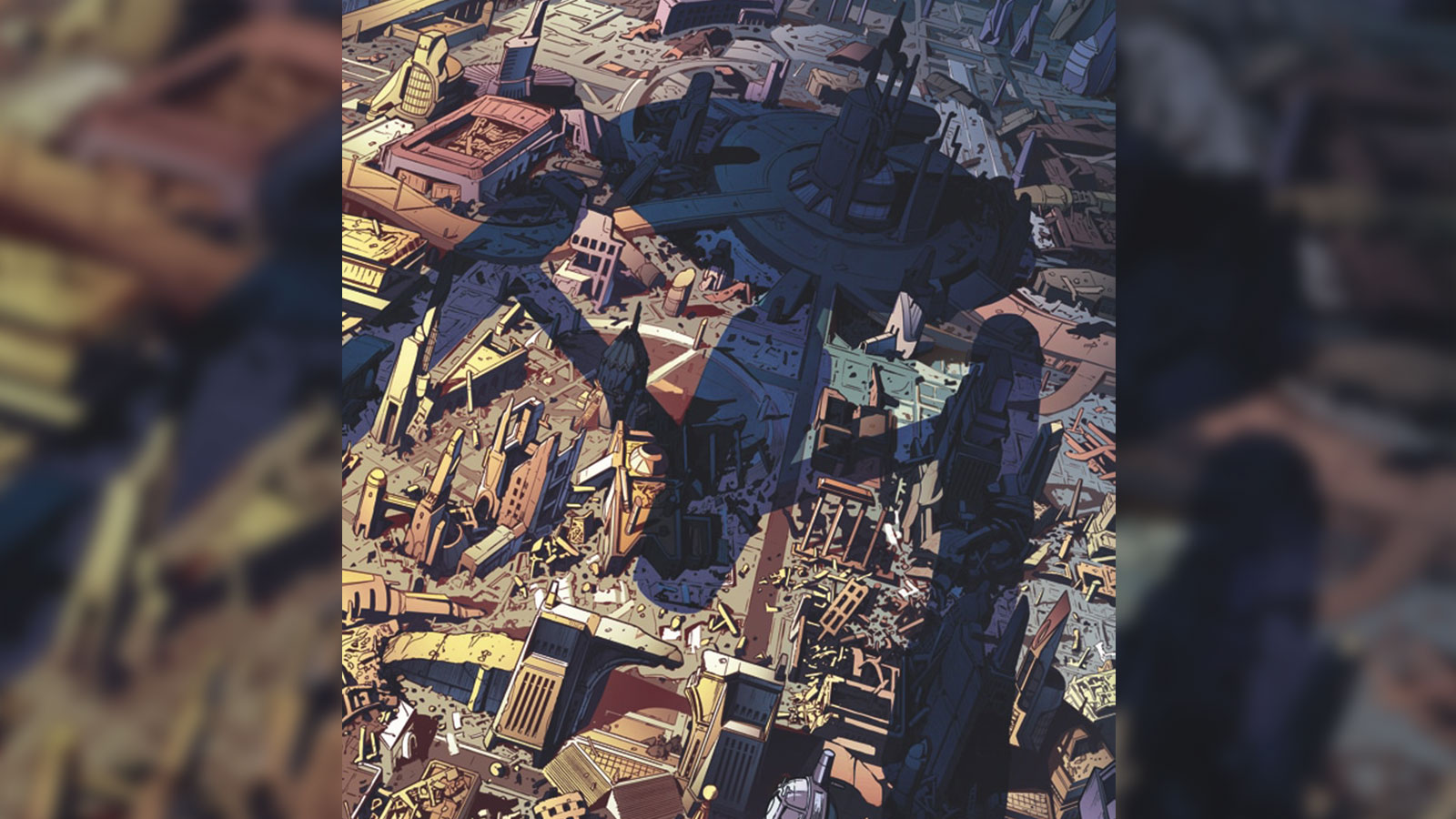 After chaotic events on multiple planets, the Enterprise continues her return home, but not before making a quick stop on a mysterious planet. When they return to the ship, however, Kirk, Spock and McCoy realize, much to their horror, that chaos just never seems to leave the Enterprise.

While not as explosive as its previous issue, #5 continues the tradition of Year Five’s fine writing and great art, setting up what’s to come expertly. 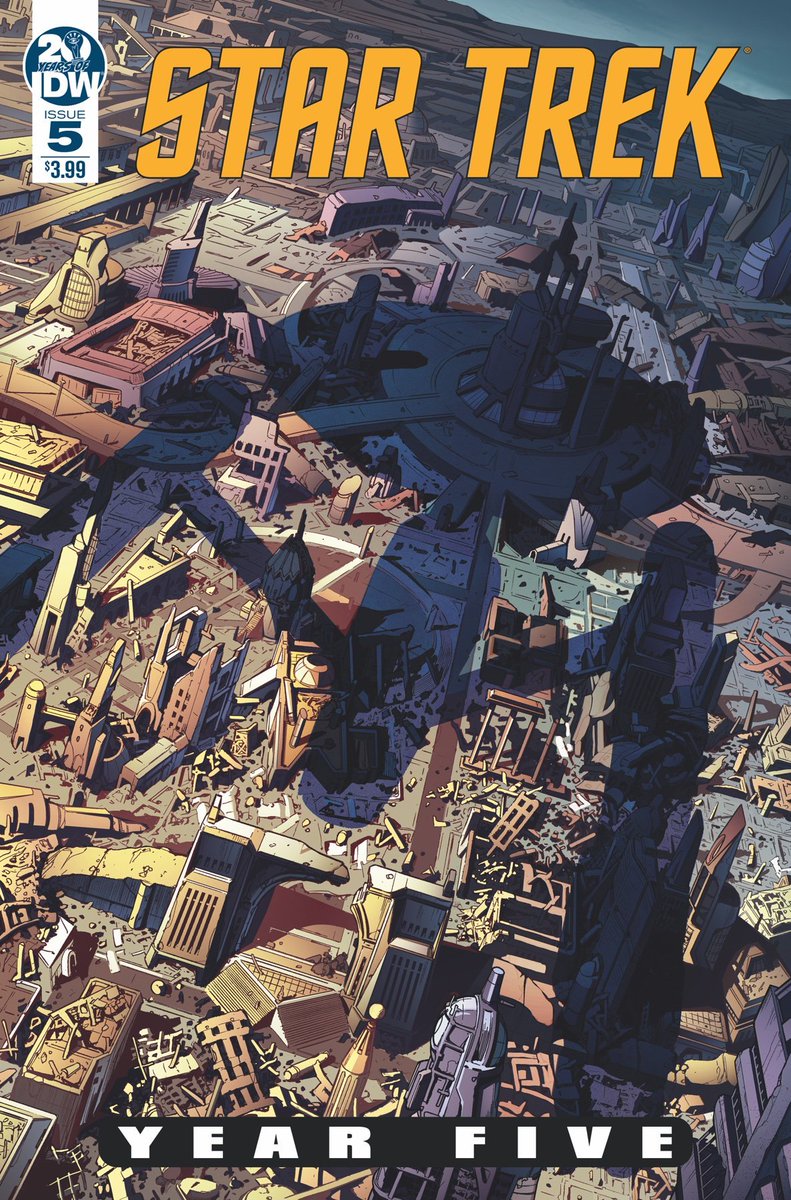 There’s little doubt anymore about Year Five‘s place in history as a high quality series in the IDW Star Trek canon. In our review of the previous issue we talked about the amount of preparation that went into bringing this series to life and that continues to shine through. But unlike #1 to #4 that spent a lot of time outdoors visiting locations new and old alike, this one takes place mostly inside the ship.

Unfortunately that is what downgrades this issue from great to good which is admittedly an unfair lens to look through. It is ultimately wise to judge a comic book series as a whole and not solely as the individual pieces that come together to form a puzzle. Part of enjoying the comic experience is reading set-up issues: books in which the ingredients are thrown into the pressure cooker before the lid is placed down and the action turned up to an eleven. #5 is that issue. 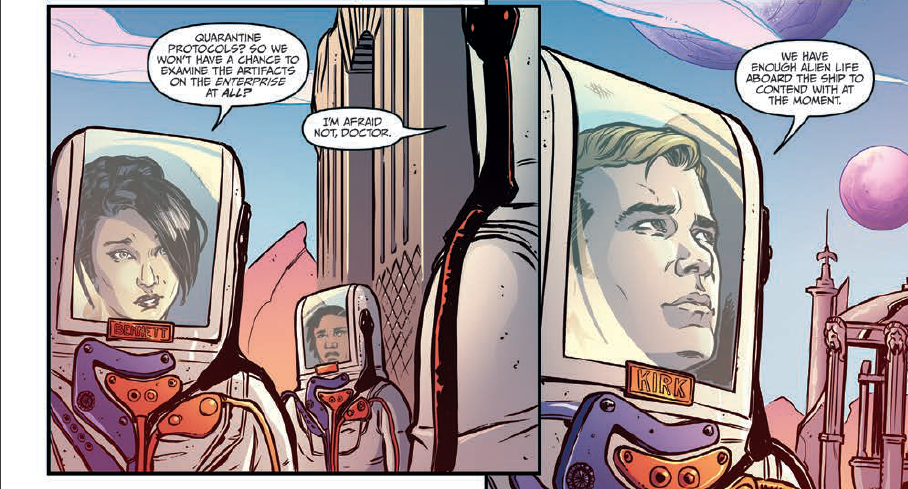 This issue begins with the crew landing on Hesperides I under orders from Starfleet. This is not a pleasant stop, however, because upon descending on their surface all the crew sees is destroyed buildings and dead bodies. If this was an inexperienced team we’d be more worried but this is, of course, the fabled crew of TOS. So this entrance is more intriguing than terrifying. 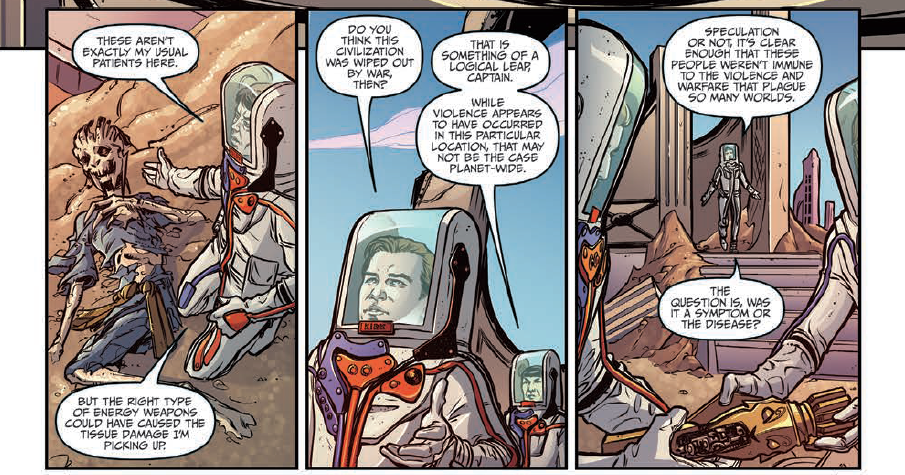 The ship collects samples while contemplating what might have happened to this planet. Particularly disappointed is Dr. Bennett who was really hoping to have more time studying the surface, but Kirk reminds her of the ticking clock. They collect the samples, beam back up and continue on their journey home.

In the ship a hardworking Uhura continues to struggle to communicate with the Thalosian child. The progress made in the previous issue when she discovers that she can get the child to respond using mathematical symbols seems to have hit a wall. But Uhura is far from ready to give up.

But all of this is rudely interrupted when reports of violent exchanges between crew members across the ship start coming in.

Jody Houser picks up the writing duties for #5. She is a veteran with a resume that includes Star Wars, Spider-Man, Stranger Things, etc. so it is not surprising at all that the writing for this issue is engaging and deeply respectful of the TOS dialog and storytelling. Houser is especially skilled in finding striking, touching moments in interactions that could have easily been glossed over to push the action. She shows us that it is a good time to stop, look around and take a breather. Plenty of smiles and pleasant conversations fill this issue and are a welcome break from election speeches and complex political conversations.

My strong issue with #5 is the plotline of violence breaking out among the crew. As an avid re-watcher of The Original Series (I suspect many of us are) that is a plot thread that is visited a few times too many. Even in Year Five we seem to be coming back to a variation of crew members fighting among themselves. While Kirk, Spock and McCoy were dealing with events off-ship in #3 and #4 the crew was caught up in a rising mutiny against Scotty over the Thalosian child. Hopefully this new turn will be quickly resolved and we’ll continue boldly going into newer and more interesting conflicts. 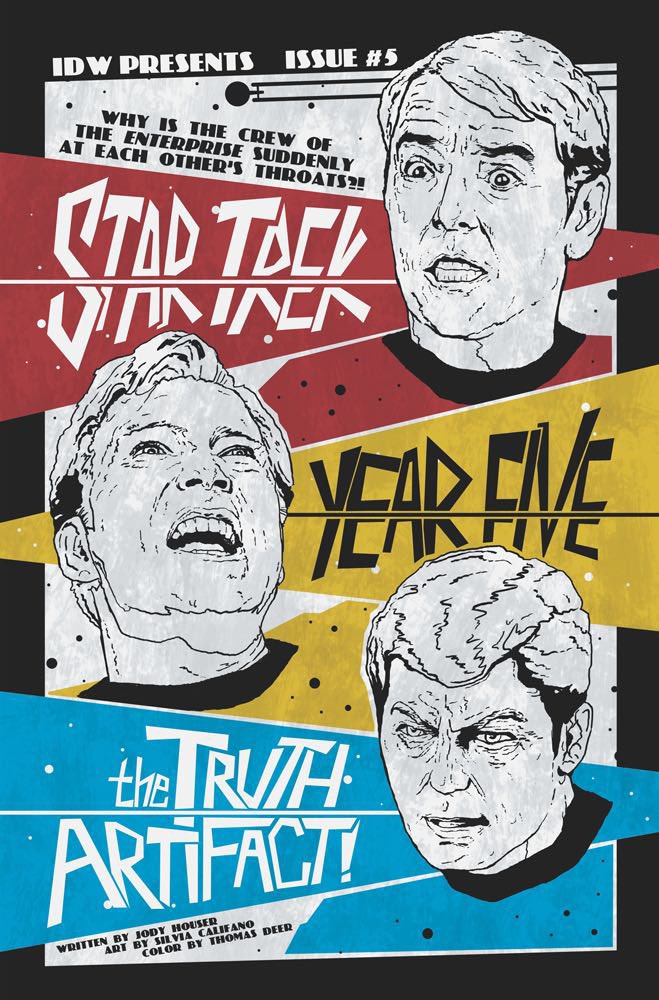 Coming in hot is Silvia Califano, a new artist in the round robin style team switching of Year Five. The art is meticulously detailed and finds a balance between the majestic architecture of a new planet and smaller character moments between our beloved crew. It keeps the high bar set up by Thompson and Coccolo in previous issues high. If the art gods are kind to us, we’ll see a lot more of Hesperides I which, in spite of being steeped in mystery, is full of beautiful Greco-Roman style imagery, which makes sense considering its name. 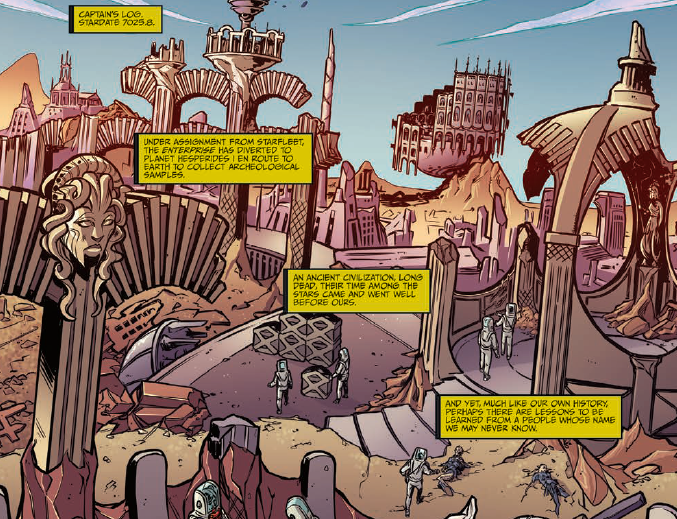 The aforementioned “fights between crew members” the one thing that is starting to outrun its welcome but it is unreasonable to cling to that considering this issue is mostly setting up things to come. It doesn’t get in the way of enjoying this issue. Crisp dialog, great art, surprising moments are on every page of #5 and that is enough for now.