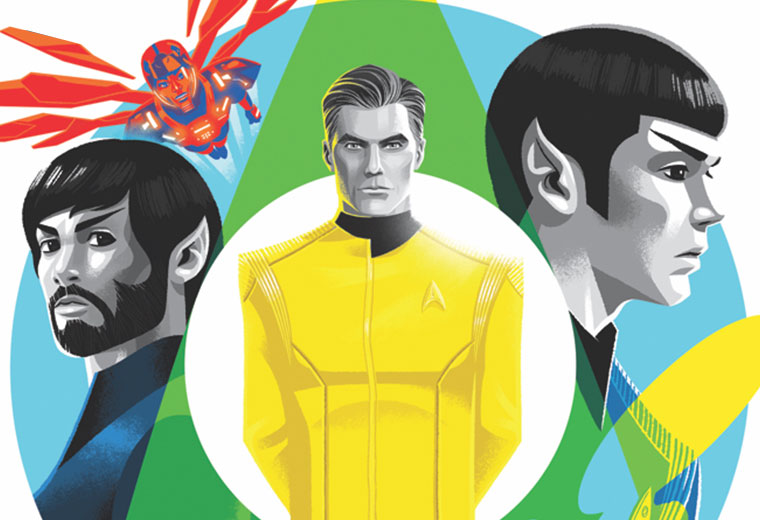 Mother has had enough. Spock misses Michael. Pike contemplates. Peace seems to be prevailing, for now, but war awaits in the shadows.


The stellar team of Johnson/Beyer/Shasteen return with beautiful writing and art, setting up big things for this miniseries. 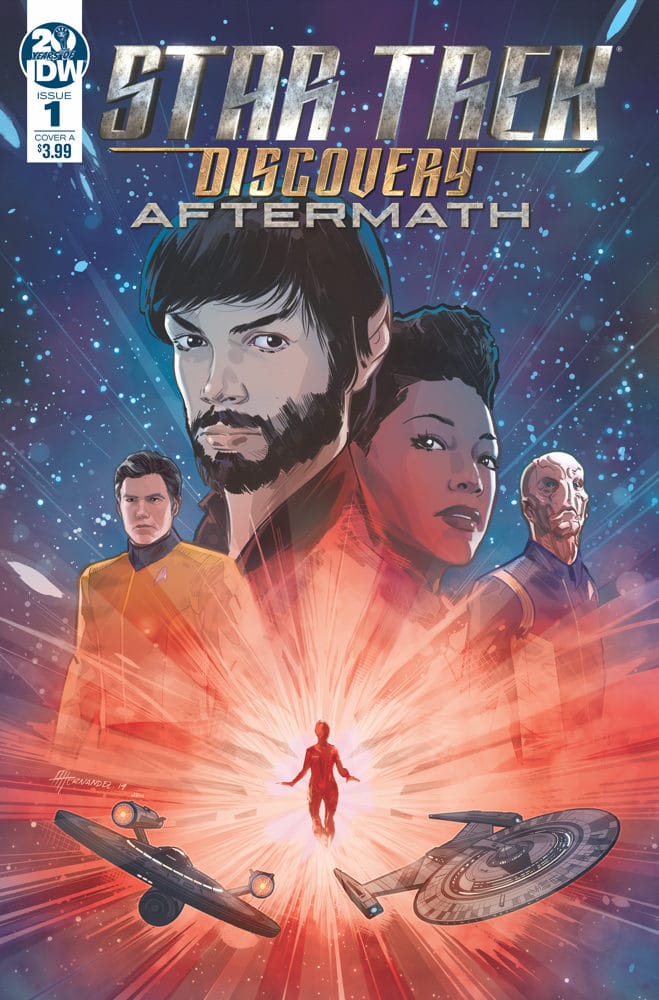 IDW Publishing is one of the best things that has happened to Star Trek in a while, due in no small part to the creators that grace these books. The art in these pages rivals the big two (Marvel and DC) in quality and almost always worthy of the cover price you pay for these books, and then some. When you pair some of the top Trek writer duos and artists to work on a Discovery plot line that the fans are chomping at the bit to get more of, there’s a lot of pressure and expectation.

Lucky us that the team doesn’t buckle. My biggest complaint with this book is that it will be only three issues long. Why would you do that to us, IDW?

It has been a month since the starship Discovery disappeared. The Enterprise crew are all still recovering from their tussle with Control, attempting to continue forging ahead without their first officer, Spock, who is finding methods within emotion and logic to deal with the loss of his sister, with mixed results.

But the universe doesn’t stop. Captain Pike’s goal to make an agreement of peace with Klingons is being considered by L’Rell. She knows the elders aren’t pleased with her recent decisions, especially since the appointment of a human torchbearer. Whispers in dark halls are getting louder about the council’s displeasures with her leadership. How long before words turn into Bat’leths?

Mike Johnson is coming up on a decade long career in the IDW canon with his humble origins going back to Star Trek: Countdown, the prequel to the 2009 film. Whatever code needs to be cracked to make Trek comics consistently good, Johnson has done it. He and Kirsten Beyer (Star Trek: Discovery writer) exhibit that they have a strong grasp on what being Klingon, human, Vulcan in the Discovery timeline, and on a larger scale, the Star Trek timeline, means.

The duo is coming back after previous hits: Succession and Light of Kahless. The latter, a prequel to Season 1 focusing on T’Kuvma’s story, is one of my favorite comic book series. The justice done to the Klingon perspective in that series returns here, deepening the world of Q’onos and her fascinating citizens.

But that’s not all. Until we get that Pike show, and we will get that Pike show, what we see of Spock and Pike’s crew in this book will satisfy. Saying anything more will mean delving into spoiler territory, but if you’re considering buying this book for the Enterprise crew, you will not be disappointed.

Tony Shasteen is not messing around. The star artist from “Light of Kahless” and noted creator of the magnificent Klingon birth scene in that book returns in master form, showing us Pike and the crew in picturesque, sharp detail that makes the book appear like an episode of Short Treks, if you squint just the right way. It is clear that effort and energy went into the art, which is what you get when creators truly care about what they are making.

Pulling back from the faces, the architecture is respected too. There aren’t as many exterior shots in this book but the ones we get leave little to be desired. 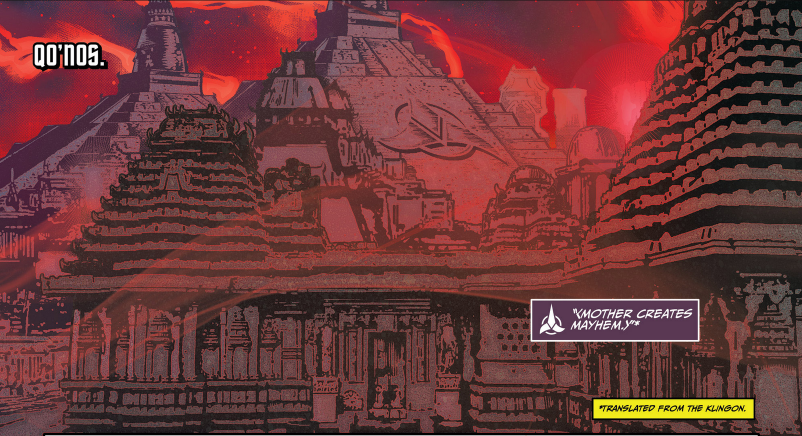 Apart from my complaint about this miniseries being too short (I’m hoping if I say it often enough, IDW will give us more issues. Say it with me!) there is one choice made here that works against Aftermath, and it has to do with the lettering. 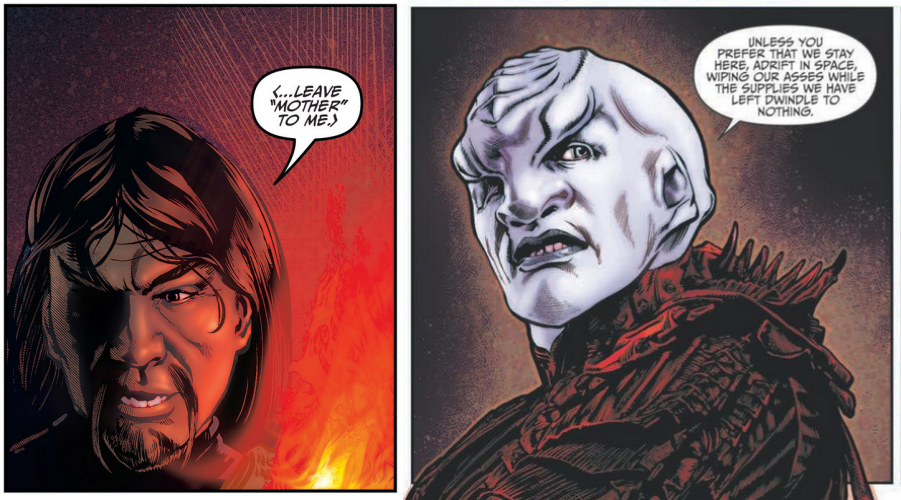 In past series featuring scenes between Klingons, there was an initial dialog bubble exchange with enclosed brackets, and a small caption that read “Translated from Klingon”. The brackets would then disappear and we’d read the dialog bubbles without them. In this issue however, it seems, in spite of the caption disclaimer at the beginning, we see the enclosures in every bubble during a Klingon conversation. Once you notice it, it is slightly jarring, and on multiple readings, it gets more and more noticeable. 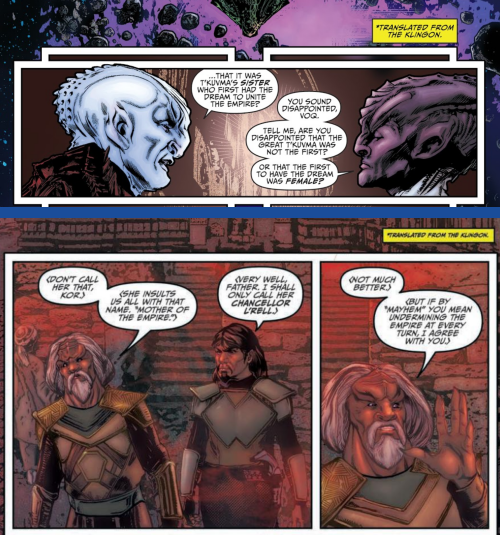 Another example of the lettering choices between Discovery: Aftermath #1 and Discovery: Light of Kahless

I reached out to IDW about this for clarification. It turns out that this is a newer choice made to distinguish Klingon dialog from human dialog, so when humans and Klingons interact, there is a distinction shown when Klingons speak Klingon.

Ultimately, though, Aftermath #1 is a triumph of a first issue, and a great opener to the tumultuous, eventful road that lies ahead in the conflict between Starfleet and Klingons.