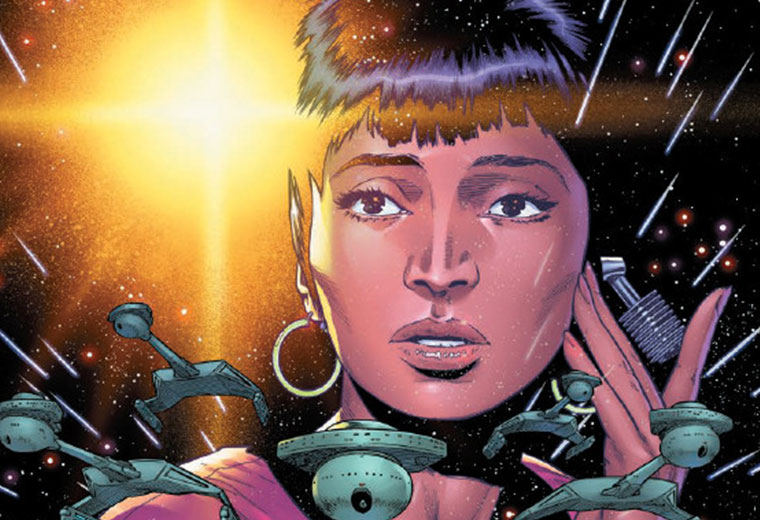 Communications all across Enterprise have broken down. Another violent riot among the crew seems unavoidable. At this critical moment, Uhura has a breakthrough. But is it too late?

Jody Houser and Silvia Califano turn the volume up from the relative quiet of the previous issue all the way to an eleven, delivering a spectacular payoff in true Trek fashion. 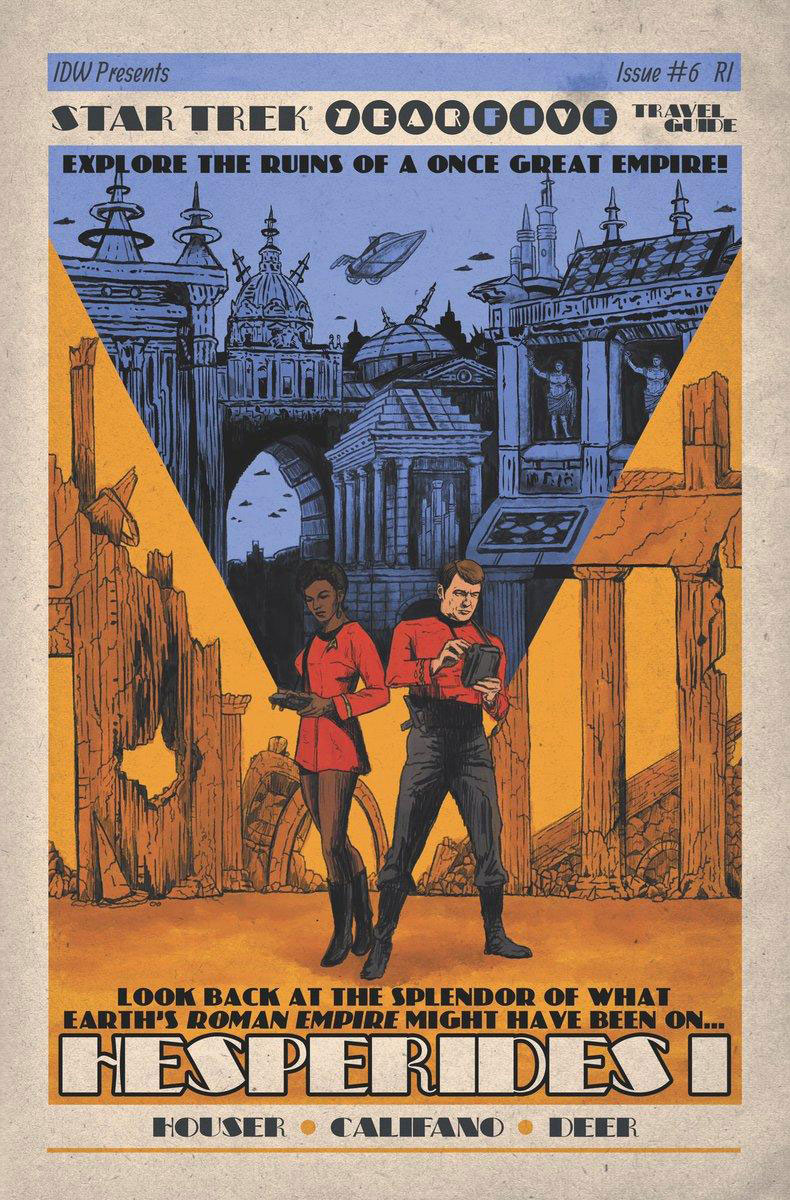 Maybe it’s just coincidence that one of IDW’s best series – Star Trek: Year Five – came out in the year of the publisher’s twentieth anniversary. Or maybe the stars decided to align perfectly, given the troubled times that we live in, to serve as a mirror for the many themes Year Five has tackled so far, like the nature of conflict, the nuance of democracy, and the value of communication (or lack thereof).

Or maybe, just maybe, the crew behind Year Five have figured out how to create a series that seems somehow both timely, and timeless.

I don’t know. I’m just happy to be a reader.

Picking up immediately after the events of issue five, Uhura, to her shock, discovers that after weeks of working with the rescued Tholian child to find a way to communicate, there might be some hope. This sign of hope? The child, who up until this point has only expressed themselves non-verbally in the most rudimentary of ways using mathematical symbols, starts speaking Federation Standard.

Uhura has no time to celebrate, however. Kirk has tasked her with resolving the communication breakdown on the ship that started after the crew returned from an archaeological survey with materials for research from Hersperides I. People are hearing things that the other person claims to have not uttered. Things take a turn quickly from simple annoyance between two people to fights among whole groups. This seems to have affected everyone except for Uhura, who has been spending all her time locked up with the Tholian.

This is just speculation, but I think when the writers room assembled to craft Year Five (we covered details of that in this review) they all challenged each other to write better arcs than the one they were writing. Jody Houser is leading now with this arc in which she takes on the challenge of communication, both within the crew and the idea of communication as a form of expression. She chooses the perfect fighter for this challenge too, in the calm, composed communications officer Uhura.

Houser trades in the pew-pew space battles for a seemingly simple talking exercise inside a room, which is deeply reminiscent of the style of the Original Series‘ writing. Before they had hundreds of millions in budgets, they worked on a shoestring budget, but that did not stop them from telling impactful stories. Houser’s choices in this arc remind me of those episodes, which I think is the best compliment I can give her.

Also, this might be stating the obvious but the idea of the ship’s communications officer troubleshooting a communications breakdown using communication is the kind of aspirational storytelling that only comes with practice and experience. It also reinforces the notion that even though at times our ability to talk to each other causes deep rifts, if done right, it can be the greatest gift we posses as a species. 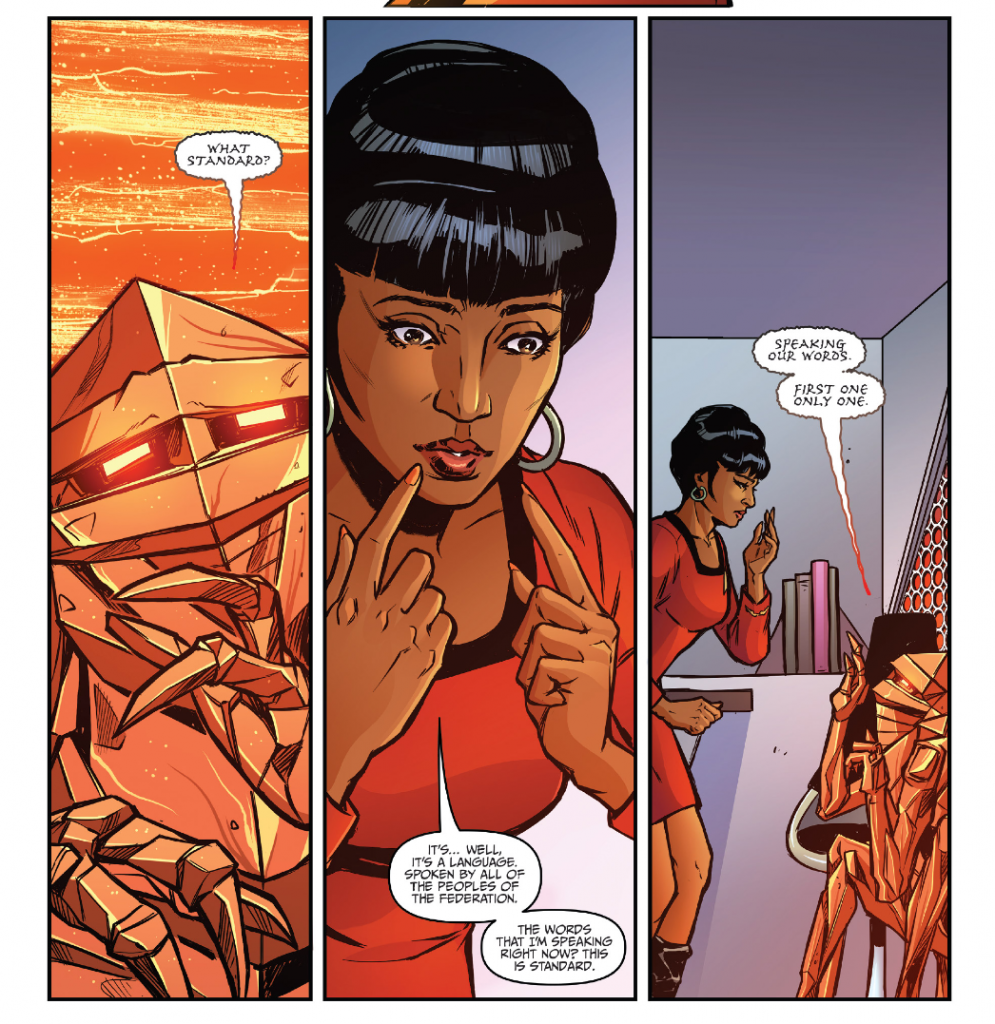 Silvia Califano is clearly not one to turn down a challenge. We have been seeing the Tholian child from the beginning and it is harder to make creatures, once their initial surprise has worn off, seem as intriguing but Califano finds a way. Another point worth repeating from previous issues’ reviews is that the likeness of the lovable crew is here in spades. Califano and colorist Thomas Deer use everything in their arsenal to make this issue seem as close to the TOS episodes as possible, and it all comes together nicely.

A lot of care has gone into background detail as well. The halls, the bridge, the overall architecture of the ship, all meld to bring out that TOS look and feel. 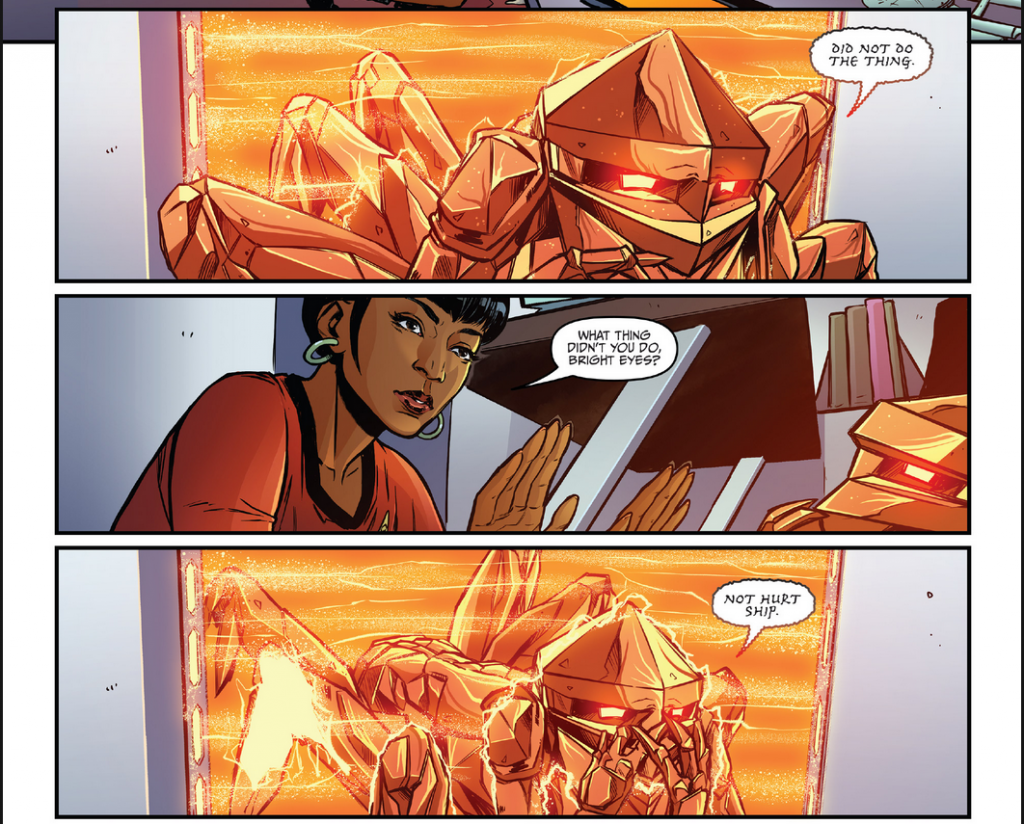 The road issue 6 takes is one less traveled, especially considering that it tries to answer the age-old storytelling question: how to make people sitting around talking interesting?, but instead of sinking to the pitfalls in its way, this issue becomes evidence that not only can that be interesting, it can say something about who we are and who we can be. 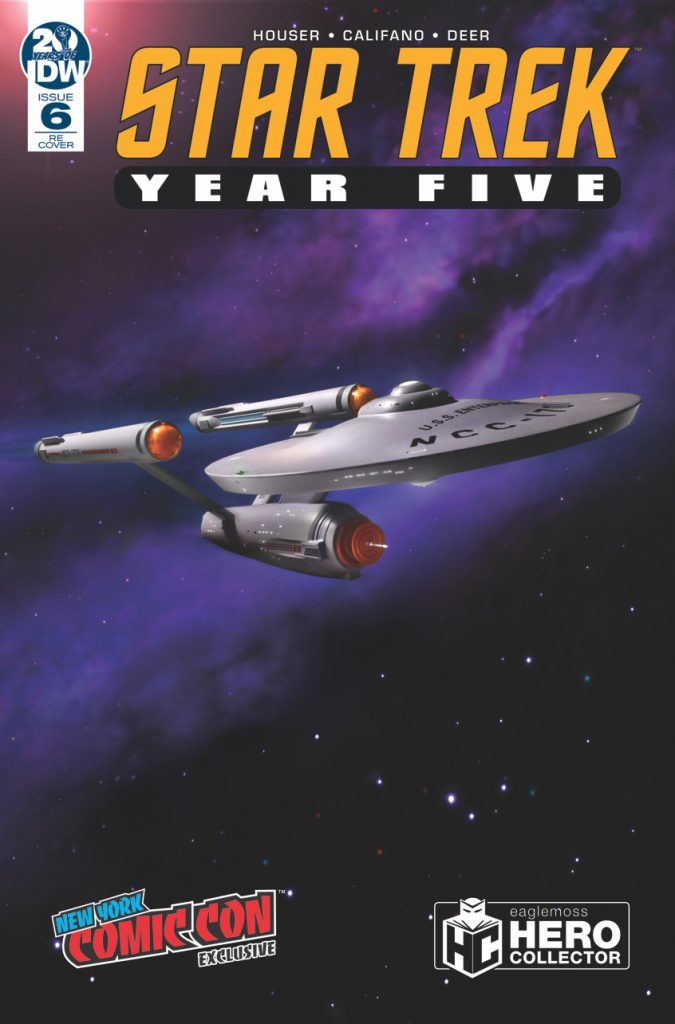