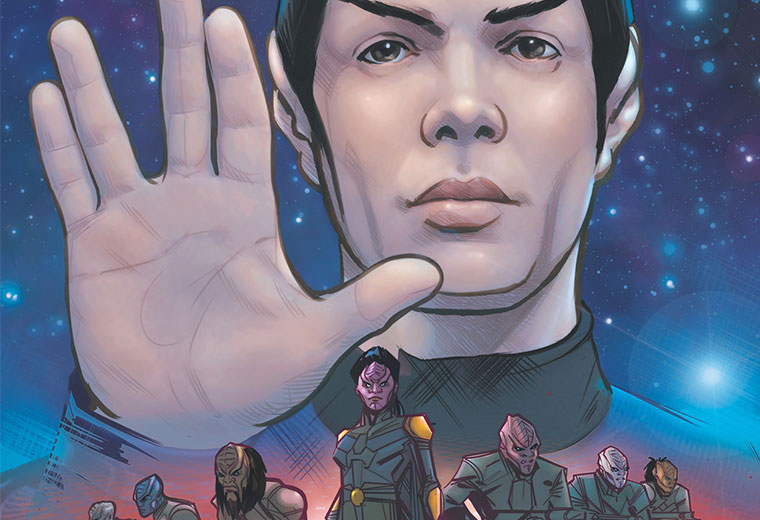 The all too important diplomatic negotiations between Pike and L’Rell are interrupted by terrorists. The Klingon leader is kidnapped. Pike and Spock are injured. What fresh hell awaits our heroes?

Aftermath #3 concludes this miniseries neatly (albeit a bit too quickly), treating us to great character moments and breathtaking art. 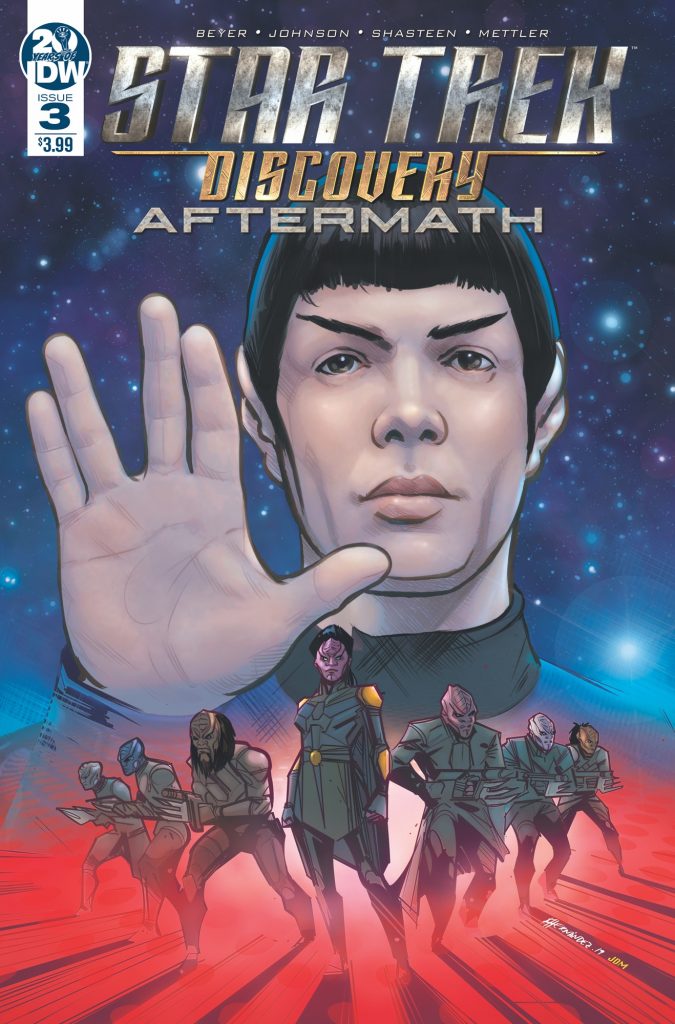 Star Trek comics this year have been a mixed bag for me. The Q Conflict ended up being a letdown. The IDW 20/20 one-shot was great but it was just that: a one-shot. Year Five so far has been profoundly impressive. Aftermath, from the first page of issue 1, has been explosive fun. I was ready to end the year on a high note with Picard: Countdown but after delays (the first issue was originally planned to be released this month) and the reveal of two disappointing covers, I had to dial my hopes down. The cover of the first issue in particular looks weird and somewhat amateurish and is not a promising start to the promo campaign for this series. Veteran artist Angel Hernandez is doing the interior art which compels me to look past my harsh judgment of this book by its cover.

Then there’s Aftermath. For the strict review readers, I’ll expand on this later, but it is a great book. Totally worth your price! But stepping out of this series, I am reminded of a quote I read once. At a public discussion of various filmmakers, a journalist asks a director, “how long do you think a movie should be?” The director responds, “as long as it needs to be.” The same can be said of comic book series. Sometimes comic runs overstay their welcome but the problem here is that this one ended too abruptly.

The Pike/Spock/L’Rell is a very interesting dynamic and there’s a lot of story to cover there. The Shadows of Kahless are an intriguing set of villains. Why would this story need to only run three issues? One possibility supported by this show and the nature of the latest Short Treks “Ask Not”, is that these seem to be quiet build-up for a possible Pike series. My theory is that CBS All Access is aiming to go all in on the surprise element with this show, hoping that when they announce that there is a Pike show and say that Season 1 is now available to stream, the subscriptions will go through the roof.

Second, is there has been no Pike series announced and IDW decided this is how long the series should be, which is another disappointing decision.

Issue 2 ended with the Shadows of Kahless – awesome name alert – entering with a literal bang, interrupting the discussions between Pike and L’Rell for a long term armistice between Starfleet and Klingons. Pike is injured and while Spock rushes to his aid L’Rell is kidnapped.

The finale picks up minutes later. L’Rell is on her knees and about to be executed. The Shadows, her executors, believe that she has betrayed the high council with her move to negotiate peace with Starfleet. Pike wakes up elsewhere, hurting, and on Spock’s arm as he is being rushed to safety from the snowy horrors of the planet.

After two issues the light continues to shine on Spock. This is his story first and foremost which was the right approach to take at this juncture in time. The arc he goes on internally from his reflection in the loss of Michael to his realization of his calling is all there, and that is much deserved credit to Kirsten Beyer and Mike Johnson.

This is not to take away from the rest of the crew. Pike, even in his hurt state, manages to show up when needed. The Shadows are formidable villains and while you don’t agree with their ways, like with good villains, you can see and understand their point of view. L’Rell trades in her physical power for mental strategy, proving to The Shadows and to us why she is the Mother.

But when I will recollect this series in the future the internal monologue of Spock as he witnesses this galaxy changing events are what I will keep with me. When we get to the end, he reminisces on where he is now and why he is here, you get it. The purpose of the series has been served.

Continuing his expert pencils is Tony Shasteen and of the three issues this is my favorite. Here Shasteen draws us in with the close-ups of characters often but masterfully also takes us out once in a while to show the breadth and scope of danger our heroes have to deal with. The challenge with a fifty plus year old franchise is that you see similar machines and architecture so often, presenting them in different ways is key to making things feel fresh. That is definitely achieved here. 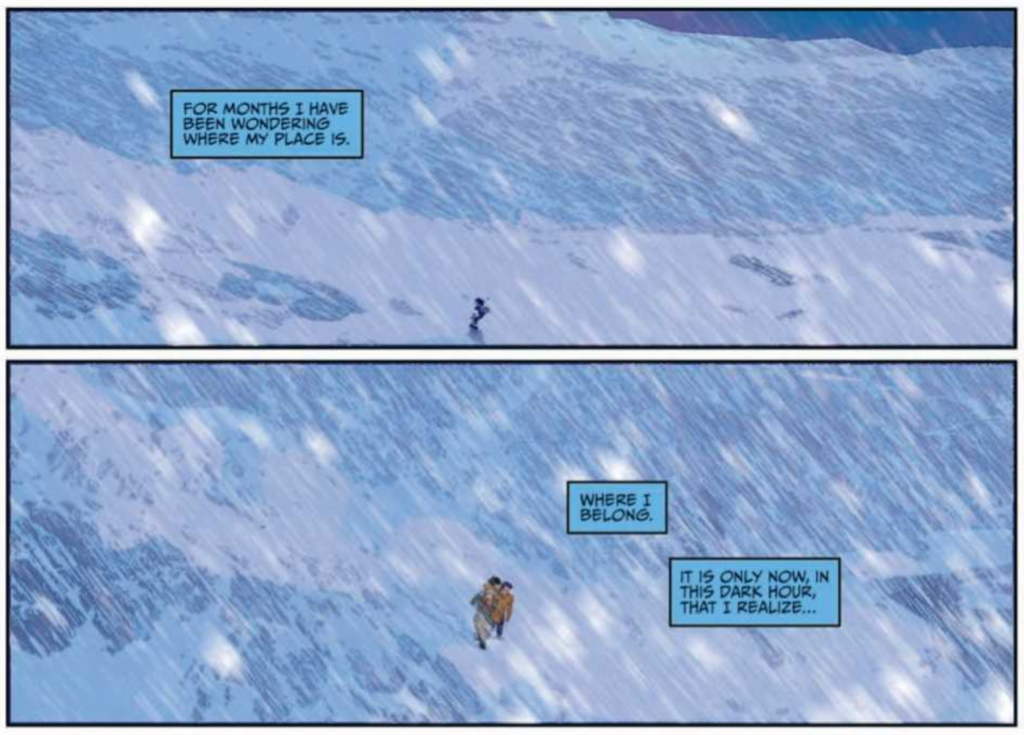 It helps immensely that colorist J D Mettler returns to color the book. The two’s works gel smoothly together and make for art that will make you pause before you turn a page and take the scenery in. Whatever may lay for us in 2020, I hope Shasteen and Mettler are called back to the drawing table. Their familiarity with this universe is a huge asset to IDW.

Issue three brings all the characters’ journeys together nicely. The fact that we know these characters’ futures does not dissuade us from feeling like this is all predictable. Even the truth that my biggest complaint with this series is its length is evidence that these issues were so well made, I couldn’t help myself from wanting more.

Whether we end up seeing Pike/Spock/L’Rell on screen again or not, Star Trek: Discovery – Aftermath has been a welcome distraction that ended up leaving a positive impression. 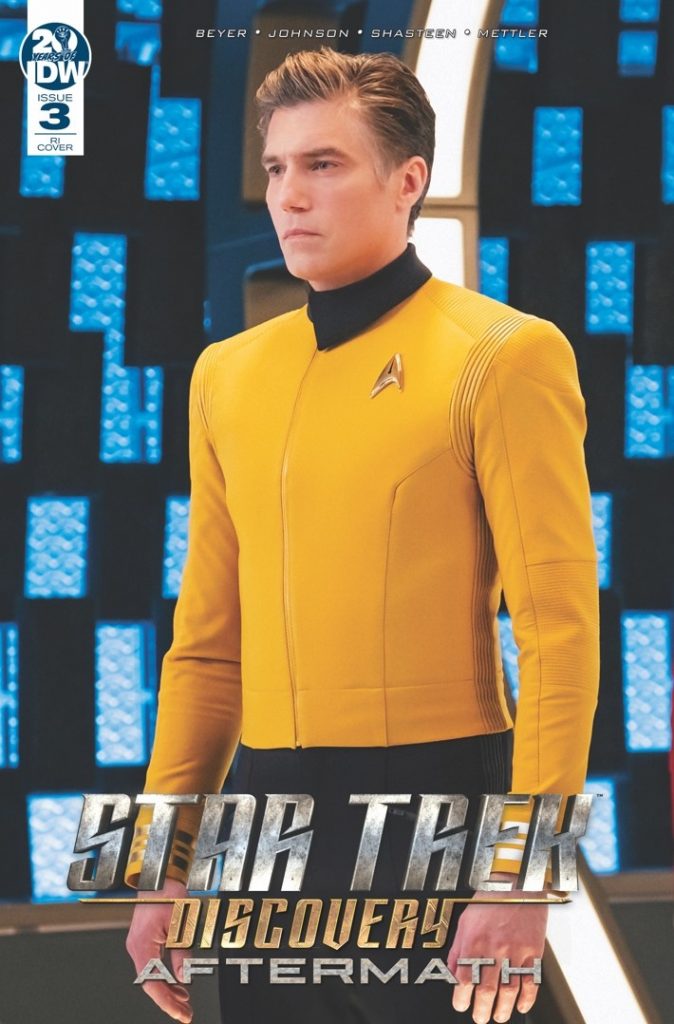