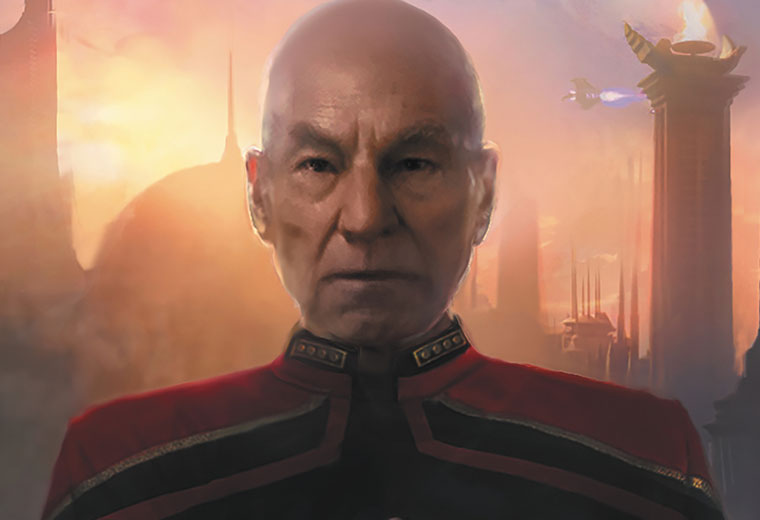 I will level with you. To me Jean-Luc Picard is the chocolate chips of Star Trek. He is that special ingredient that can make bad things palatable and good things great. When the Star Trek: Picard series announcement happened — given their tie-in canon building campaigns — it was easy to deduce that CBS would tag in companion books to fill in larger story gaps until the show arrives. 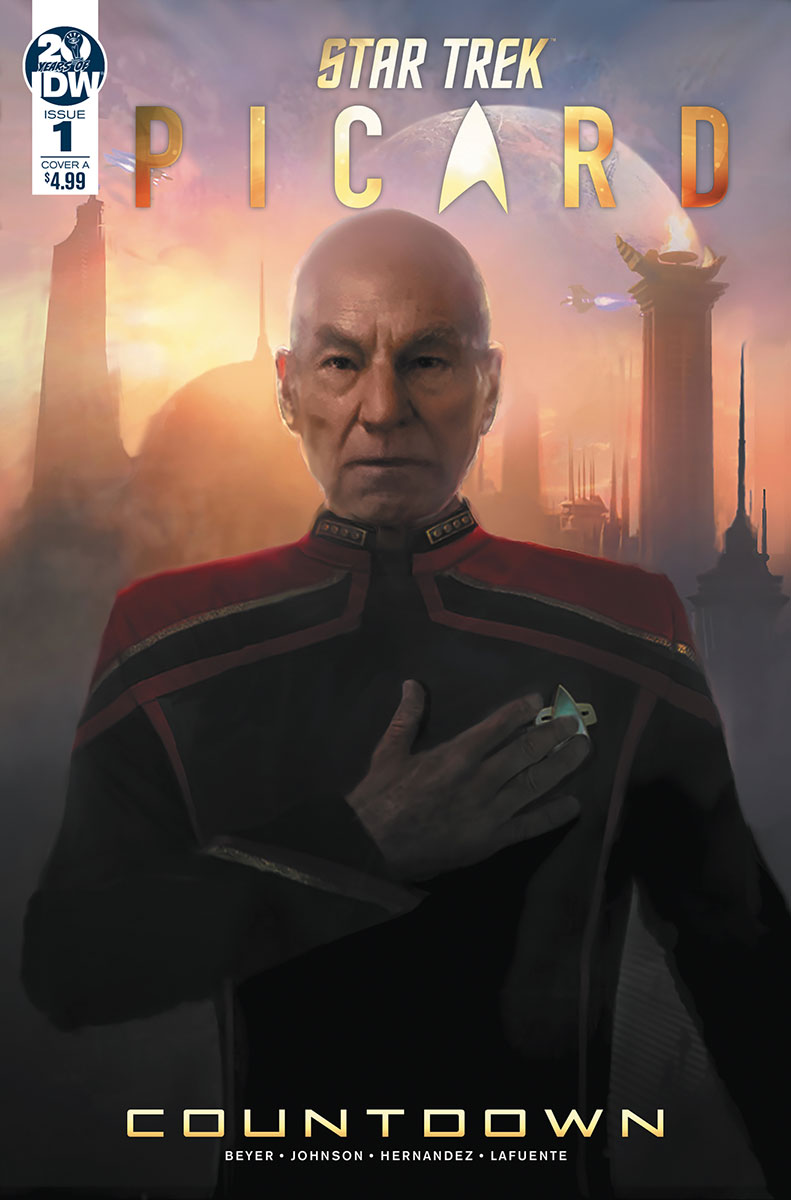 IDW has proven over and over that they’re the right house for these books. Light of Kahless remains one of the best Trek comics of the century. Star Trek: Discovery Discovery – Succession and Star Trek: Discovery – Aftermath are thoroughly entertaining and re-readable. Picard and company have also been breaking things in the Mirror Universe, much to the pleasure of our evil sides. However, in recent weeks, the covers for this series started coming out and I was a bit underwhelmed.

But good news! The cover is the only underwhelming thing about this issue. Dare to look past it, and you will be rewarded. 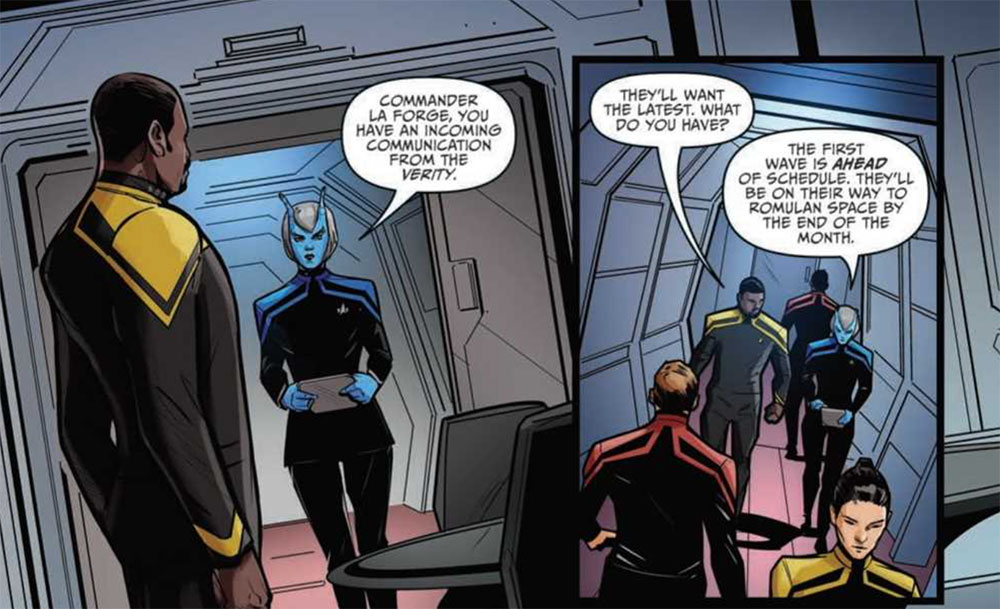 The Star Trek: Picard series takes place in 2386, around the same time as the impending Romulan supernova that destroyed Romulus and brought us the wrath of Nero in 2009’s Star Trek (recommended companion reading is Star Trek: Countdown, the prequel comic to 2009 film, which also features Picard).

Picard is now an Admiral, sailing the waves of the universe and taking care of business like only he can. When the task to rescue Romulans from a planet about to be caught in the blast area of the supernova knocks at his door, he’s determined to navigate the notoriously deceptive ways of the Romulan government and help. But surprises await him, and all the while the supernova’s clock ticks. 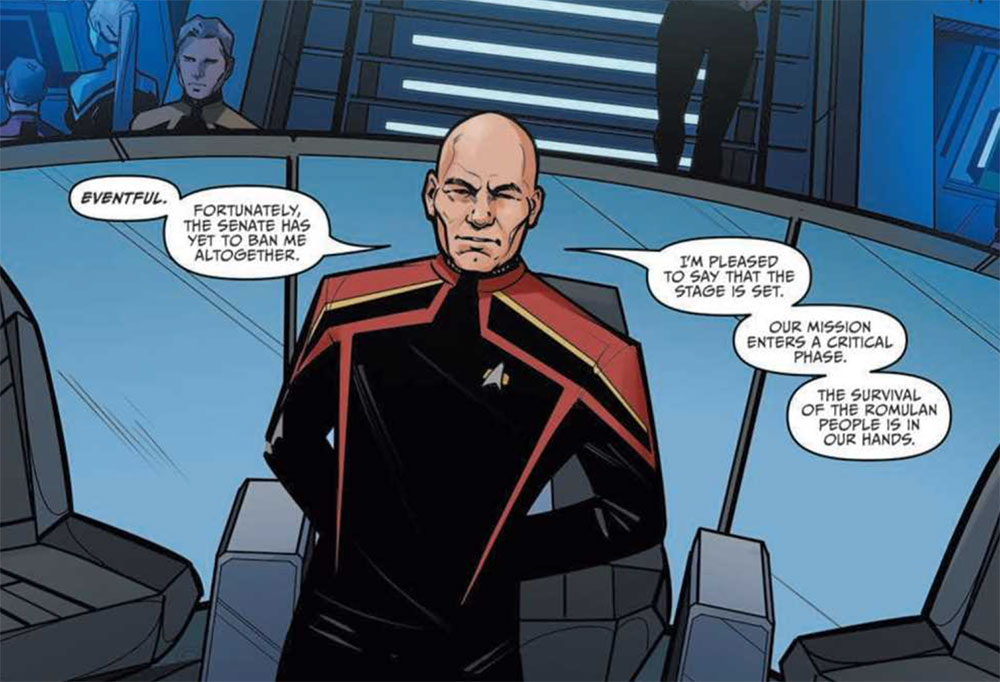 I hope this doesn’t go to their heads but at this point if you put the names Kirsten Beyer and Mike Johnson on a comic, you can just take my money. They might seem out of their element since most of their collaborations have been in the Discovery universe so far, but this new ground doesn’t faze them one bit. They seem to know that Picard and the others that we see in this series have an even larger stage to deliver on when the show comes around and that responsibility is on strong shoulders. Characters are introduced and make an impression immediately and the relationships that form are pleasantly surprising.

Seeing Picard on a ship and do his thing brings out a childlike glee. He remains cautiously optimistic about developments and when pushed to a corner fights back in his trademark diplomatic style. Good thing he is not alone to deal with all this but saying any more would be delving into spoiler territory.

The artist for this series was not announced for the longest time, which can be a double edged sword. When news broke that it was Angel Hernandez, however, I could rest easy. He brings his veteran penciling skills to this book and fills it with joy and intrigue. We go from open fields to close ups of Picard to extreme wides of starships with the smoothness of wine from Chateau Picard. Sir Patrick Stewart might seem like an easy face to draw at the outset but when you’re filling a comic with him, it’s daunting to get his unique features right in every panel.

But Hernandez has got it.

The covers. For those of us that are already invested, covers are not an issue, but for casual fans who might see this on a bookshelf at their local store or online, they don’t work on the same level as the covers of previous series.

For Star Trek: Picard – Countdown Beyer, Johnson, Hernandez and team are on time at the chocolate factory, making one delicious chocolate chip after another, just perfect enough to top all my delicacies till the show arrives.