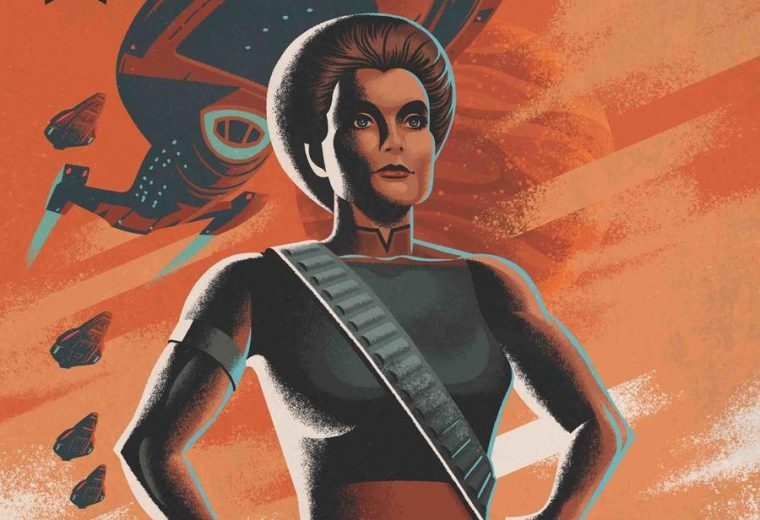 The Voyager has been shot out halfway across the Mirror Universe. But forget trying to find a way back, Janeway and crew are determined to start a whole new empire. Blood will spill.

As if the return of veteran J.K. Woodward wasn’t already enough, Paul Allor pens a compelling one-shot that feels deeply true to the Terran Empire’s spirit. 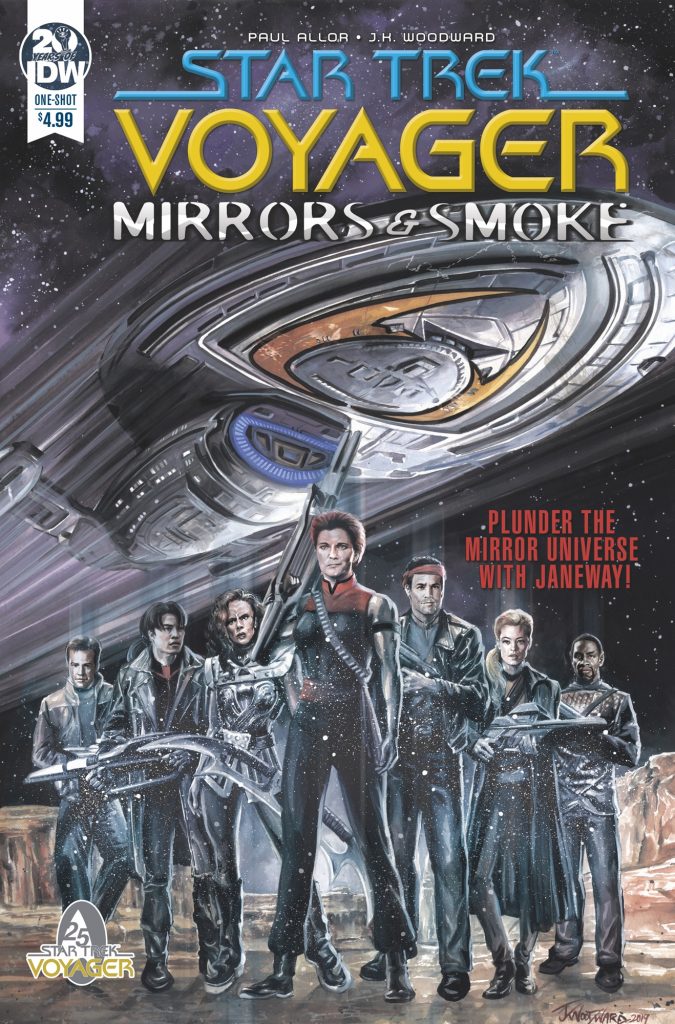 Whoever came up with the idea to do a Star Trek: Voyager Mirror Universe series, glory be to them. There have been forays into this particular sector in prose fiction, but when you do it as a comic book series, especially when the show’s 25th anniversary is on the horizon, the intrigue is amplified. Some of IDW’s best Trek comics have been in the Mirror Universe and by bringing back the star artist of Mirror Broken IDW really wants us to know it means business.

Long story long: this one-shot is setting up a new ongoing series that showcases the adventures of the Mirror Voyager crew. They couldn’t have kicked it off any better. While Paul Allor will be staying for the actual series, J.K. will not be drawing it. The reasons for not hanging on to the artist that kick started this Mirror Universe comic book craze and bought to it a style that now inspires convention cosplays is beyond me, but IDW has proven me wrong before. I remain skeptical on that front.

Kathryn Janeway is one of our greatest heroes. When she spends a lifetime working up the Starfleet ladder, earning her stripes along the way and leaving her mark across the galaxy, the Voyager comes to her amid cheer and pomp, ready for her Captaincy.

In the Mirror Universe, their journey starts off much more ominously. Janeway, a lifelong slave, has escaped from a mining facility, and along with Voyager and her crew, she is thrown at the other end of the universe. She decides to call this new place home and declares herself plunderer, conqueror, queen. An year later we find her pursuing in her territory a vessel captured by another ship because she suspects that the cargo in it is not what its captain Neelix says it is.

Much to her – and our – surprise, it’s a woman named Annika Hansen. Who is she? What does she want? What’s in store for our glorious crew?

Paul Allor has been writing comics for sometime now. He has left a stamp on G.I. Joe, Power Rangers, Teenage Mutant Ninja Turtles, and more. With “Mirrors & Smoke” he’s poking the Trek bear for the first time. I started the one-shot a skeptic, I ended it a fan. Paul shows an understanding of not only the Star Trek universe but perhaps, more impressively, an evil attraction to the Mirror Universe. There are no good guys in this world and our captain who in our universe has made a career out of fighting the good fight, she is the baddest of them all.

The book also has a lot of surprises in store. The one-line premise is just a tease for the larger story. That seems obvious on the surface but in comics especially it is hard to pack a lot into one book and not make it seem like a chore to read. Paul knows how to make it all feel balanced and light, which is good news for the future series. 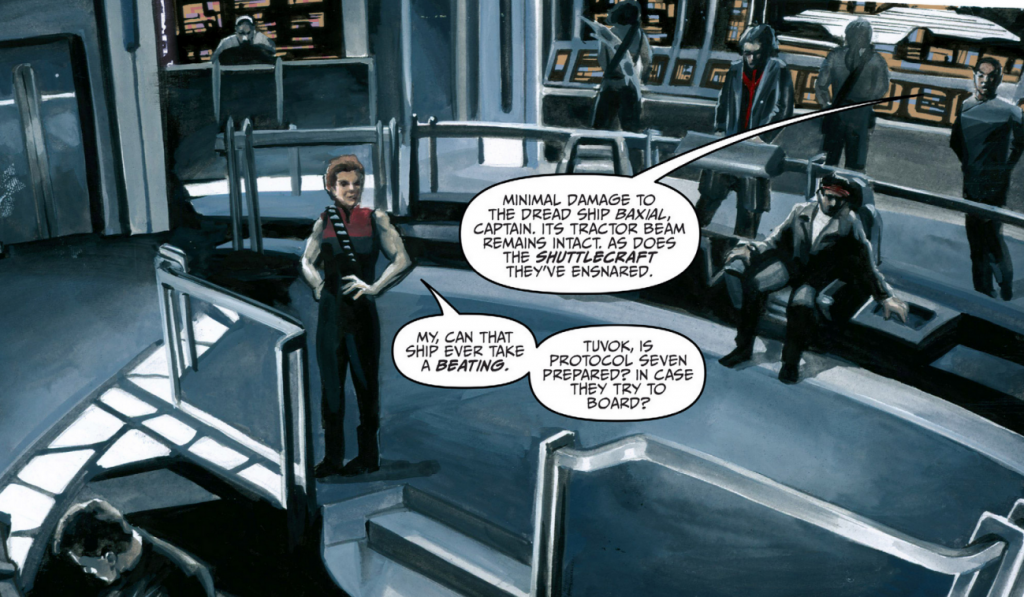 J.K. Woodward is the Alex Ross of Star Trek comics. He often pencils, inks, and colors his pages, which truly makes the work he does unique and carries with it a kind of beauty rare to very few comic artists working today. It’s no wonder he was the one who started the TNG Mirror Universe as a CBS catalog before Mirror Broken even happened.

This correspondent had the privilege of doing a deep-dive interview with Woodward (which you can listen to here starting at 38:30) during which he talks about how deeply his life is connected to Star Trek. You don’t need to know the details to appreciate the labor put into his pages. It’s all there on the page. 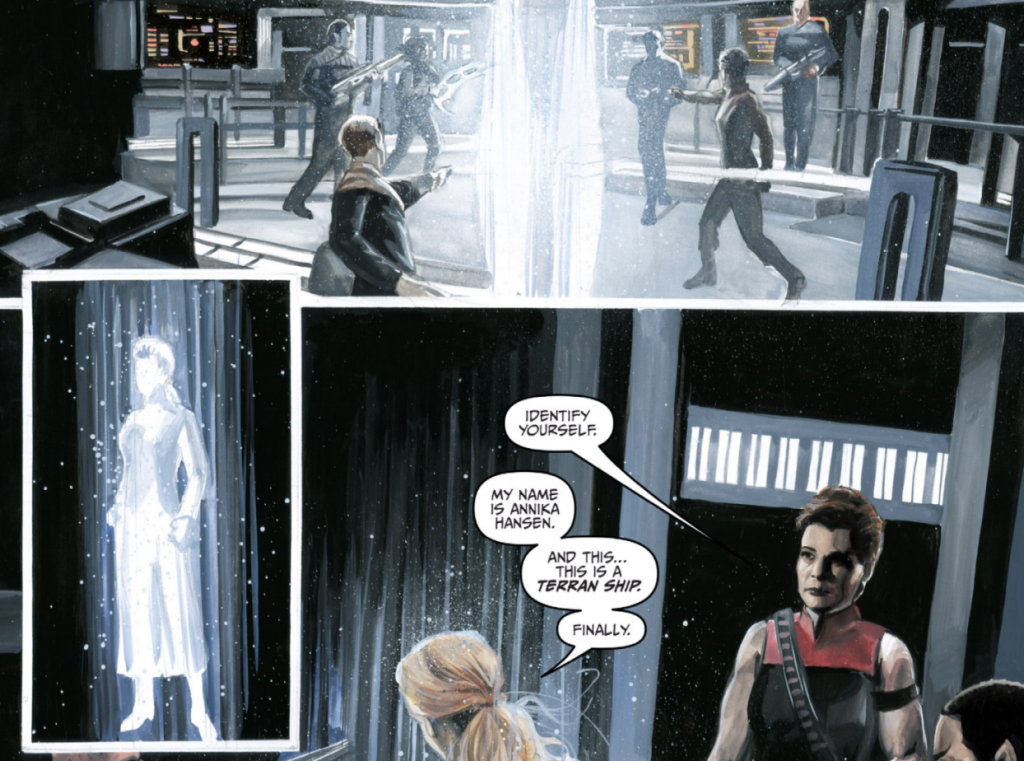 Sadly, Woodward has not been as Trek-nically active as he was in past years. We only got two books with his art this year, both one shots. One can only hope that this changes soon. 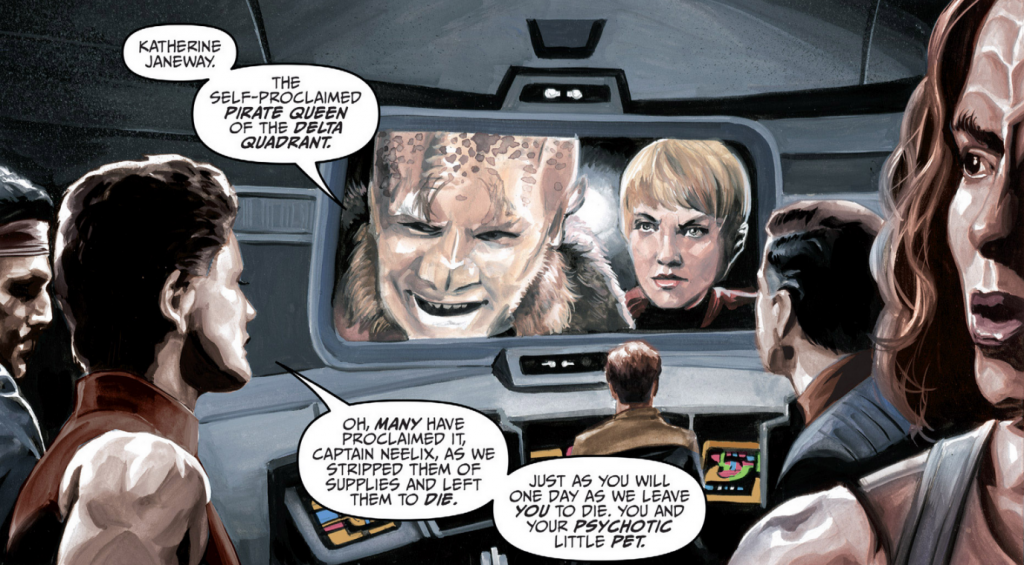 This is not as much a “wrong” in the book as it is a soft, cautious nudge: Paul Allor’s dialog bubbles can get wordy. This is not always bad but too much of that and it starts feeling like a Scott/David Tipton book. The Tiptons are veteran Trek comic writers who love wordy bubbles, perhaps a bit too much, and sometimes pages start to weigh heavy. There are panels in this book that are better left out to avoid spoilers but they look dangerously close to this classic Tipton example from Terra Incognita. 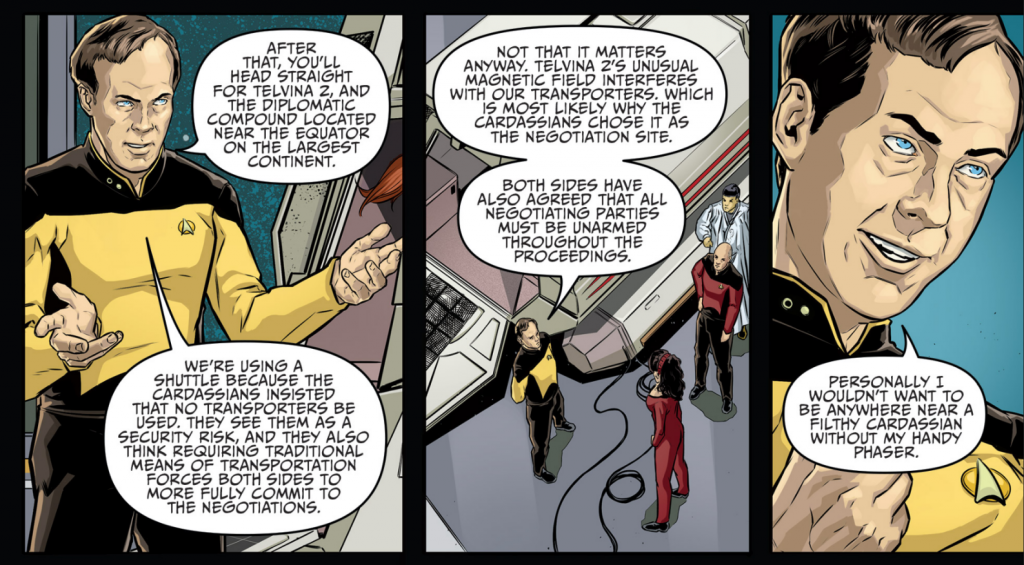 This is a great one-shot. 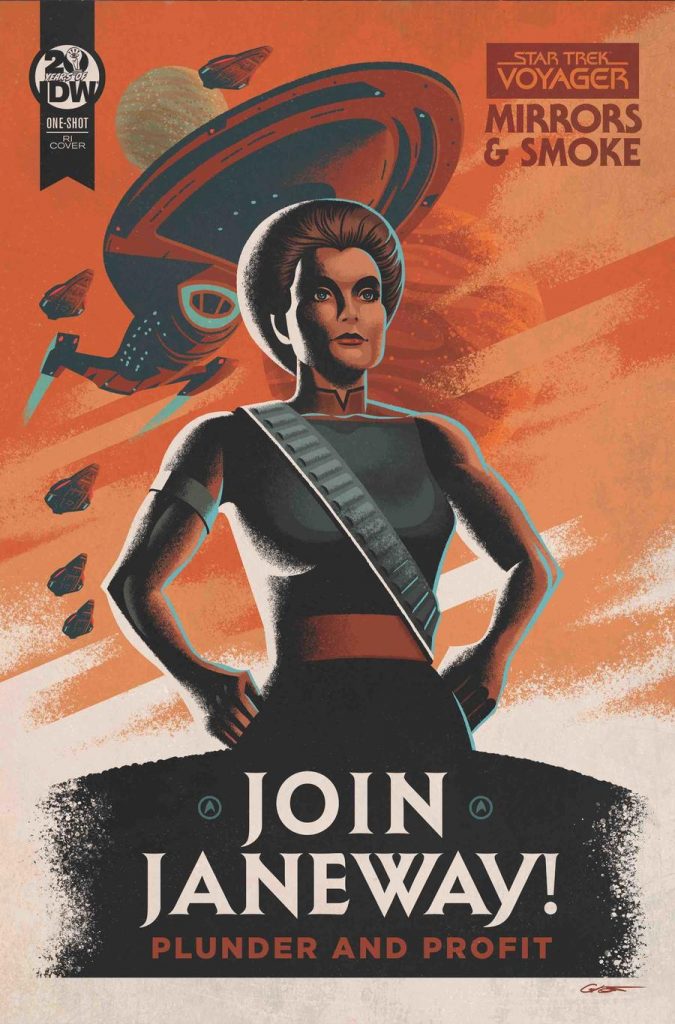