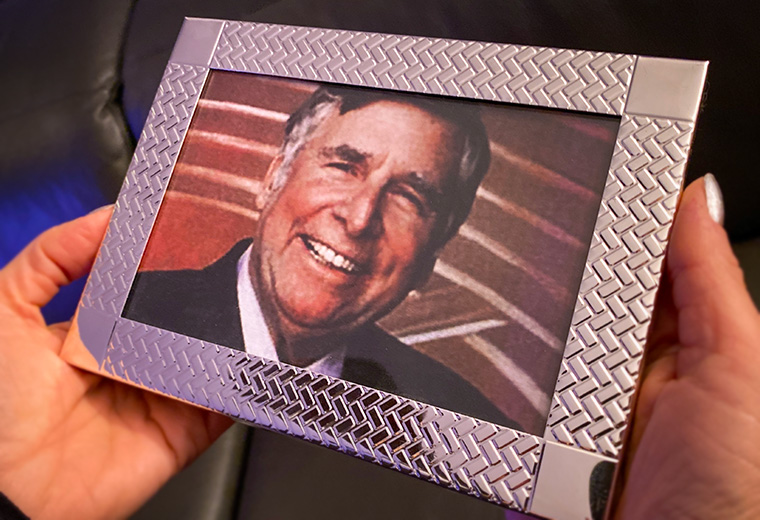 When Theresa Lewis was four years old, she received a visit from Santa Claus. One night on Christmas Eve while peering out her window, she saw a man in Santa’s traditional outfit on the roof of her house with a massive bag over his shoulder. This revelation kept her belief in Santa alive and strong throughout her childhood.

Of course, now 50 years old, Theresa knows this man was not Saint Nick, but actually someone who, for many, may represent an equally legendary figure: “The Great Bird of the Galaxy” himself, Gene Roddenberry.

Yes, Theresa Lewis is the granddaughter of Star Trek creator Gene Roddenberry. Now more than 28 years after Gene’s death, Theresa doesn’t want to tell the world what the creator of Star Trek was like. Rather, she wants the world to know what her Grandpa Gene was like. It’s a pretty simply message, really:

“I want the Star Trek community to know how wonderful my grandfather was.” 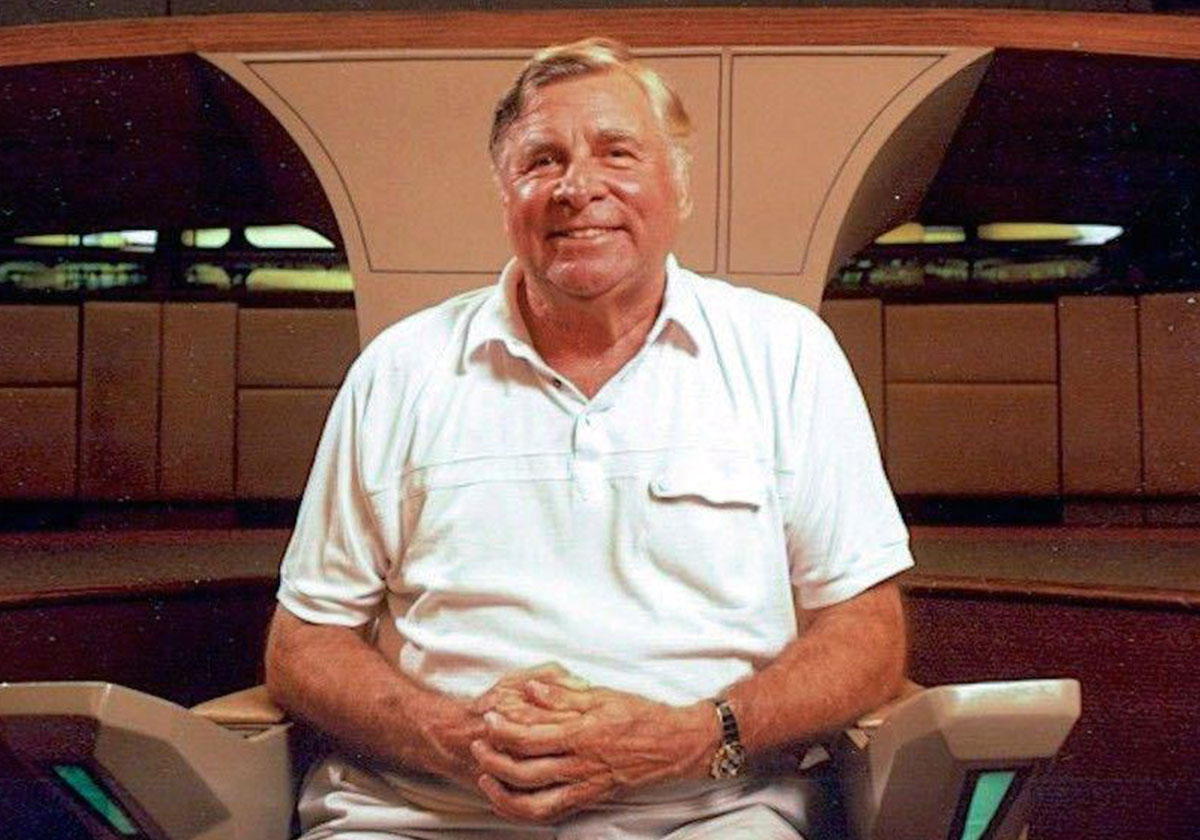 Star Trek creator Gene Roddenberry on the set of Star Trek: The Next Generation

Stepping into the Guardian of Forever

Theresa Lewis was born in San Diego on June 3rd, 1969. Coincidentally, that was the airdate of The Original Series finale, “Turnabout Intruder,” not that Gene was watching as he rushed to the hospital to welcome his granddaughter to the world. Theresa’s father was William Luther Lewis, and her mother was Darleen Roddenberry, (who happened to be an extra in the TOS episode “Miri”). Darleen was Gene’s daughter through his first marriage, to a woman named Eileen Anita Rexroat.

Theresa spent most of her childhood growing up in Reno, Nevada, with her mother, but would frequently travel to Beverley Hills to see her grandfather, since that’s where Gene worked after The Original Series. Ever since she was a child, Theresa’s mother wanted to keep her children out of the spotlight that accompanied the Roddenberry name, not that having the creator of Star Trek as a grandfather bothered Theresa that much in her younger years. 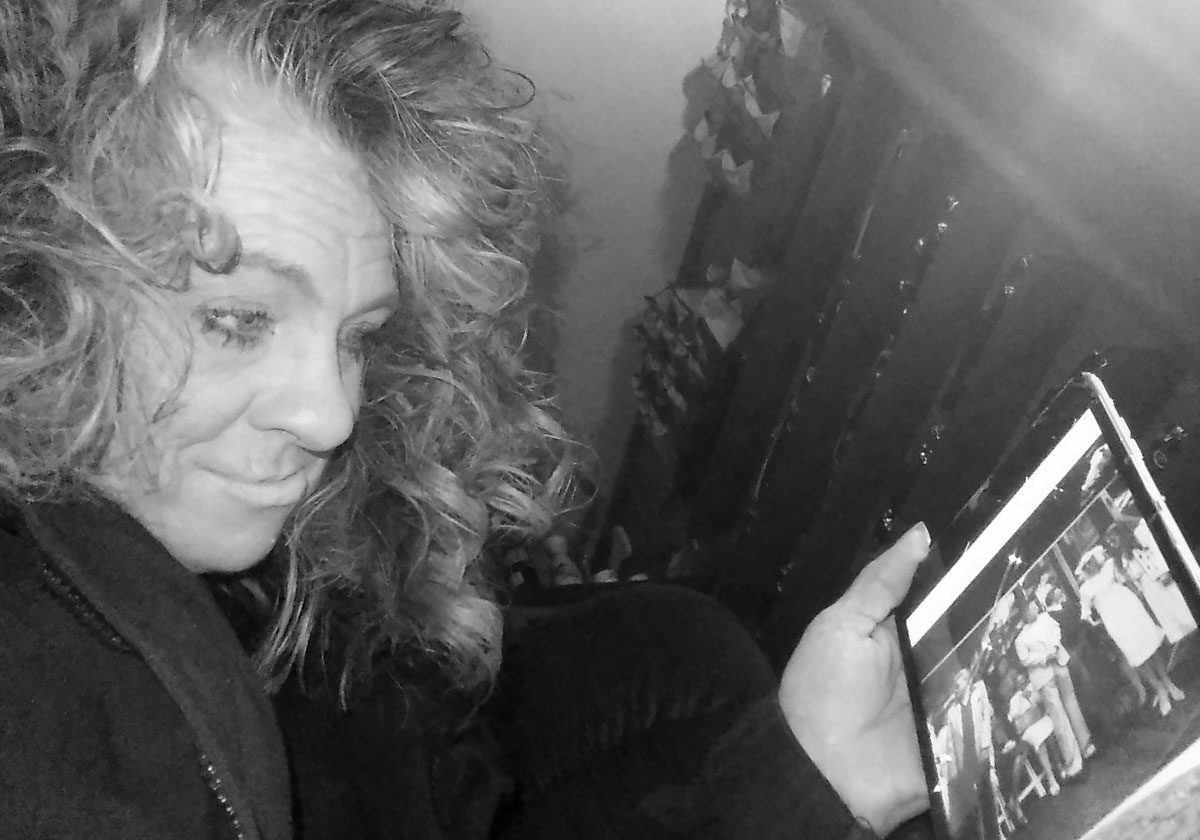 Theresa fondly remembers her childhood years and the time she spent with her grandfather. Her earliest memory of him, when she was about three or four years old, shines a spotlight on his generosity and love for his grandchildren.

“We were at his house one day and I wanted an ice cream. So he took me to the store, and I didn’t know which one I wanted,” Theresa says. “So he bought every single ice cream in the store! He had to go buy a huge box freezer just to put it all in!”

As she was growing up, there would be times she would ride around Paramount Studios in a golf cart (labelled NCC-1701, of course), jumping speed bumps and generally causing a ruckus. She would run around the newly built Enterprise bridge set with Rod Roddeberry as The Wrath of Khan was filming, causing cast and crew members to call out “here some the Roddenberry kids!” But the most memorable times with her grandfather came at his home, when she often sat with Gene while he worked in his home office. And when she wasn’t there in his office, she would be playing with all the Star Trek memorabilia Gene’s assistant, Susan Sackett, would send the Roddenberry kids.

“I had so many tribbles!” she remembers. 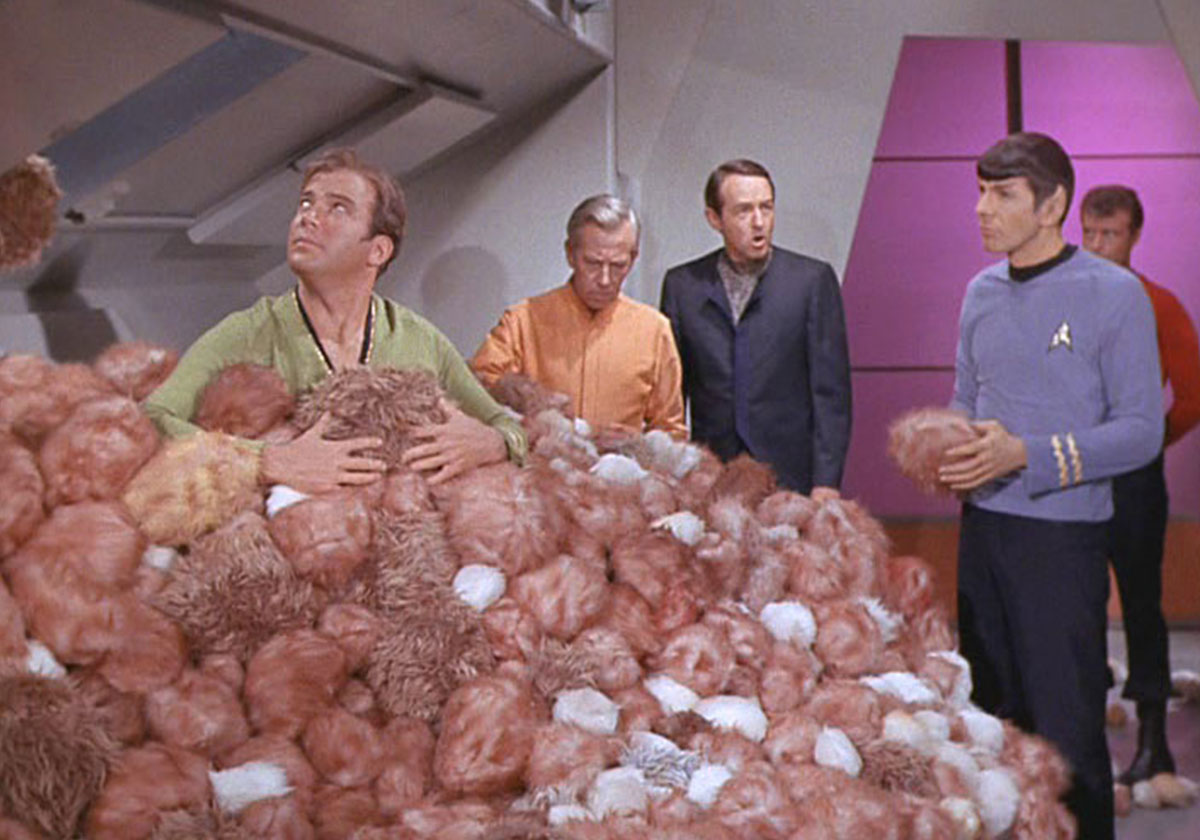 As a grandfather, Gene was, as Theresa puts it, simply “the nicest man I have ever seen,” a person with the “warmest smile,” and someone who she never saw upset or mean. According to her, Gene’s greatest strength was that he was a dedicated family man, a man who treated his grandchildren like the most precious things in his life.

If climbing on the roof on Christmas Eve wasn’t evidence enough, holidays were always an event at the Roddenberry household.

“When it came down to holidays, he was really big on that,” Theresa says. “Like at Easter, he would plan the whole Easter egg hunt. One year, he hid an egg at the bottom of the swimming pool!”

Holidays certainly weren’t the only time Theresa and her family would have fun. In fact, Gene’s favorite place to go – according to Theresa – was Disneyland.

“The Pirates of the Caribbean ride was his favorite,” Theresa says, who adds that Gene really enjoyed Space Mountain, as well.

Theresa remembers a close-knit family in her formative years, but it seems her relationship with her grandfather was particularly special and long-lasting.

“Growing up, I could tell him anything, including the time I tried drugs,” she recalls. “His sense of humor was so down to earth and laid back. When I tried drugs, my mom went running to her dad. He asked me to come over to him. I went over there and he said, ‘well, it’s alright to at least try drugs. How do you think Star Trek was created?’”

We’ll leave it lost to history whether he was being serious or not. 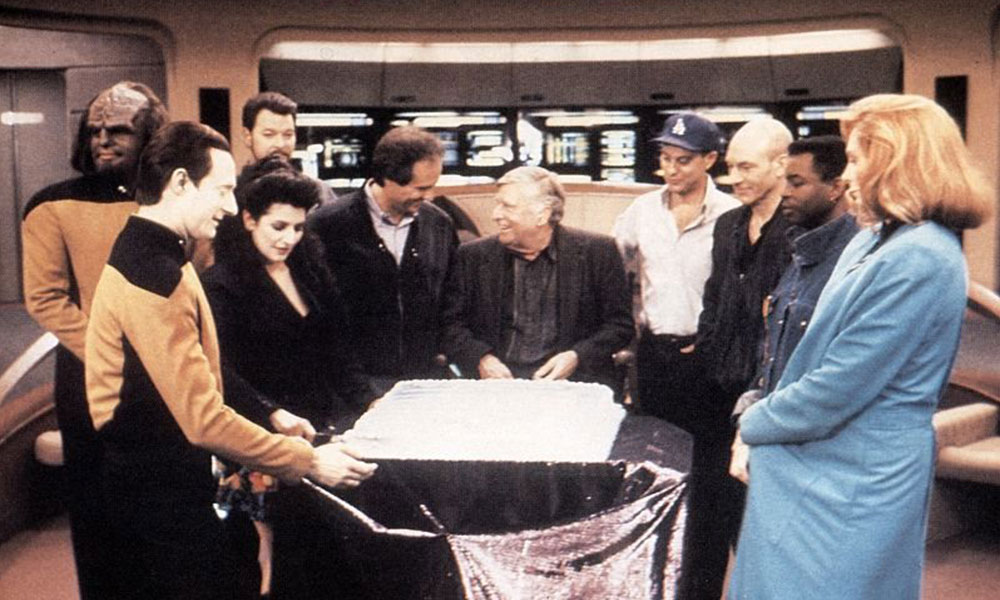 Of course, the idea that Gene Roddenberry was a “normal” person was broken later in Theresa’s life.

“When I moved out and went to college, I dated a guy who was a total Trekkie,” Theresa recalled. “He started explaining to me what it meant to be a Trekkie and how wonderful the show was. He said, ‘you don’t even know what blood you have in your veins! Do you realize how fortunate you are?’”

This fortune is certainly not lost on Theresa now.

“Gene made such a big impact on everything with Star Trek,” she says. “I was blown away when I started realizing what my grandfather did. So many areas of life and so many professions were impacted by Star Trek.“

Her grandfather’s death on October 24, 1991 holds a particularly prevalent memory for Theresa. Not because she was there at his bedside (only two people were with Gene: his wife, Majel, and David Alexander, Gene’s biographer), but rather because she wasn’t there – yet she felt his death anyway.

“I was driving between Carson City and Reno when I suddenly felt that my Grandpa Gene was there in the car with me. It was such a strange sensation. It was like he was just sitting there in the passenger seat, and I felt his presence. It was a good feeling.”

20 minutes later, Theresa got the call that her grandfather had died.

“He was the greatest man in my life. I looked up to him,” she recalls with tears in her eyes. “I still love him to death. I wish I could go back and ask him more questions.”

As mentioned earlier, Theresa felt like she could talk to her grandfather about anything. And it turns out that’s still the case today.

“He was my idol and was and still is the most important male influence in my life,” Theresa says.  “I talk to him everyday. When I pray, I pray to him. I say everything to him. If I need any help, I say, ‘Grandpa, can you help me?’ He always does help me. He’s my higher power.” 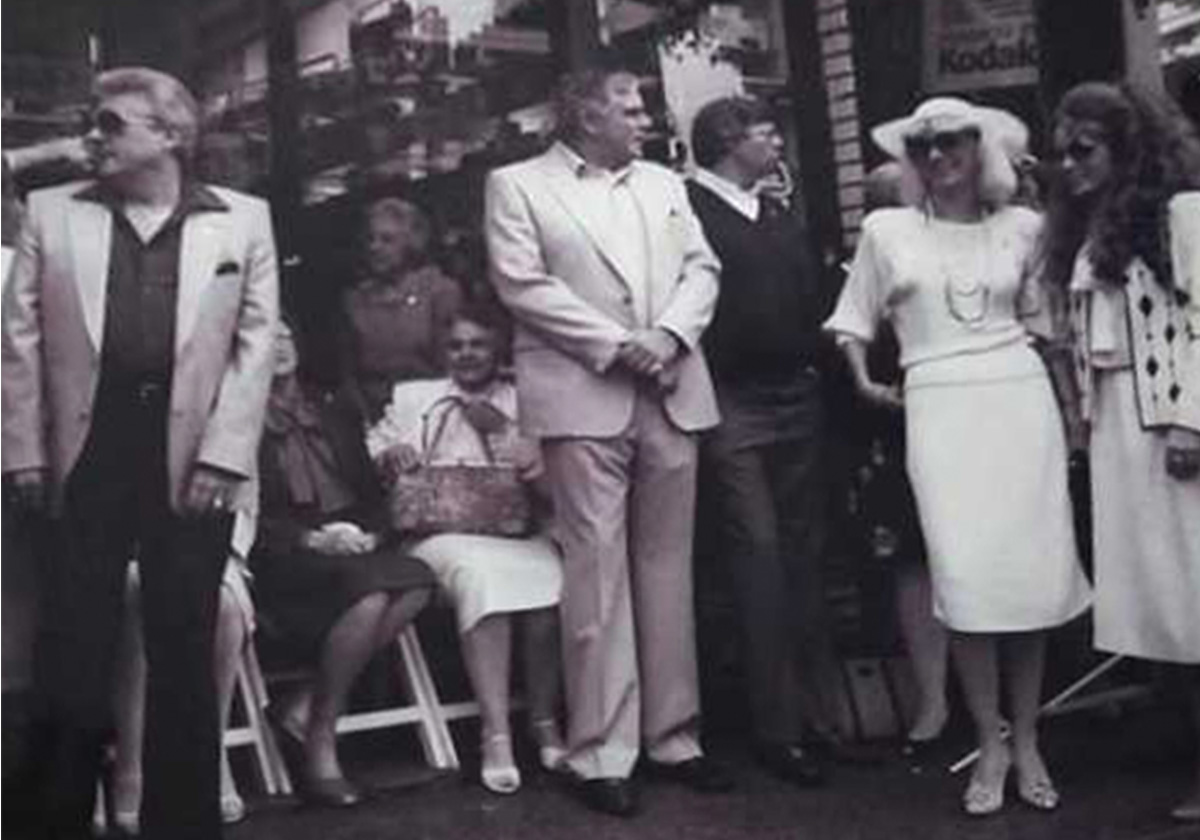 Theresa has kept up with the various Star Trek movies and TV shows throughout the years. In fact, just a couple days before this interview, she happened to finish re-watching J.J. Abrams’ 2009 Star Trek reboot – the first movie of a trilogy she particularly enjoys.

Just like millions of fans around the world, Theresa lives her life by the ideals Gene Roddenberry put on paper when he first envisioned Star Trek. She says that’s the best way to keep his vision alive.

“Keep believing in Star Trek! Share it! I think he truly believed what he wrote about mankind and life and love. Keep his vision going. Instill it in your children. Make them Star Trek fans! I think he would enjoy what Star Trek has become today.”

In this article:Gene Roddenberry, Interview, Star Trek: The Original Series