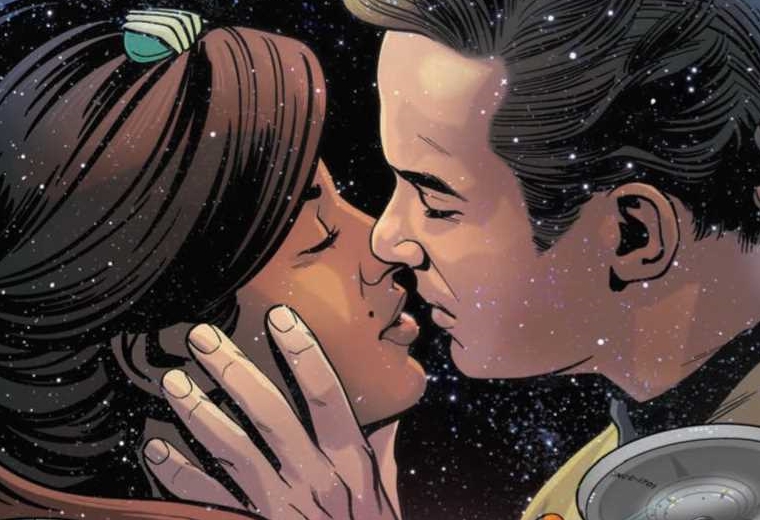 A chance encounter while on shore leave turns into a love story of a lifetime for James T Kirk. It turns out that finding and keeping love might be harder than star ship battles.

Flirtatious banter, phaser-toting action, snappy McCoy/Kirk/Spock chats, heartbreak and an extinction level event all merge to give us a romance tale worthy of Trek canon greatness. 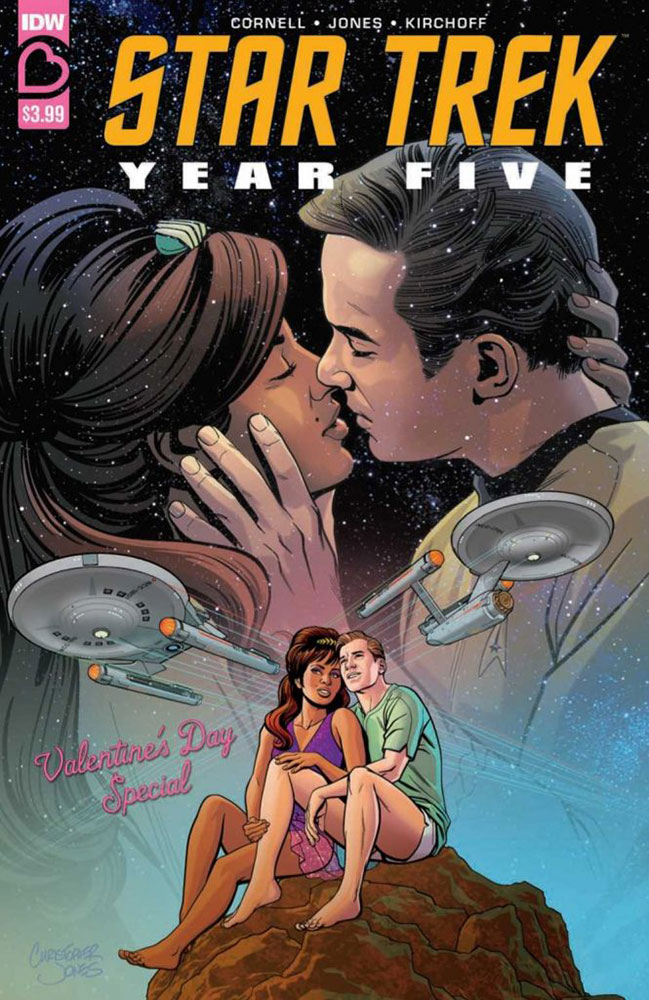 Love stories are not Trek’s greatest asset. While there have been amazing love stories told within the franchise (“City on the Edge of Forever,” anyone?), on the list of reasons to watch Star Trek, its exploration of affection is not in the top three for most viewers. That’s understandable. After all, if you’re living life one galaxy at a time, a love story is nearly impossible to become a part of your life. Deep Space Nine comes closest to making stories of passion a core element of its overall story, which is befitting, since our cast is grounded in a single location for most of the series.

A lack of love stories is a problem that continues with Star Trek comics, and comics in general, as well. But since the arrival of Star Trek: Year Five, this series has revolutionized the canon of Star Trek in comics, as we know it. With a strong grip, unwavering confidence and a bold vision of bringing our Original Series crew into the era of modern comics, this series continues to be a trailblazer. With this one-shot, I am happy to report that Year Five‘s high quality remains consistent. Paul Cornell and Chris Jones, welcome guest creators working on this one-shot, deliver a love story that is not only a worthy sequel to the tale of Edith Keeler and James T. Kirk but also a powerful and beautiful love story all on its own. 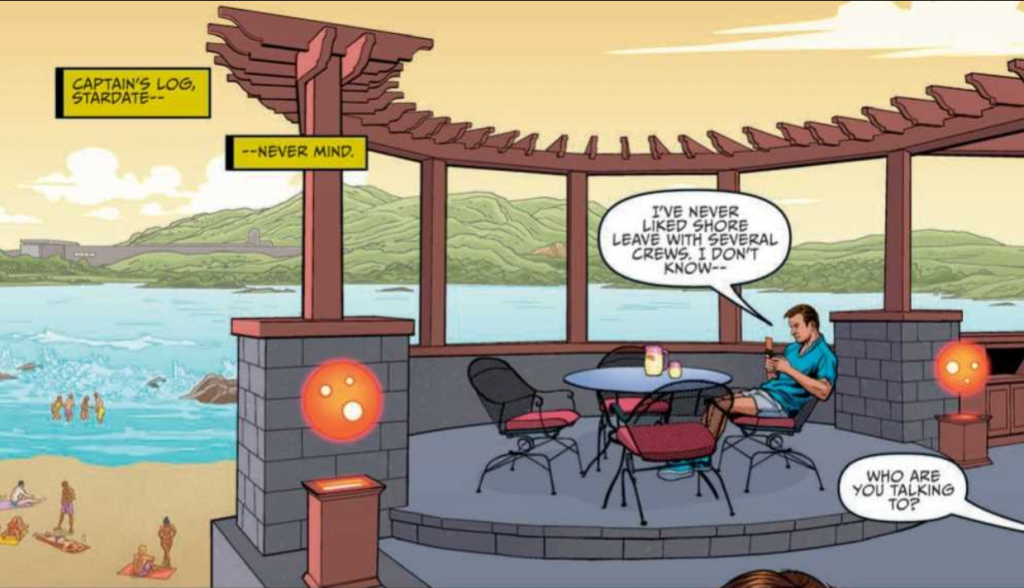 The Star Trek: Year Five – Valentine’s Day Special is a one-shot, meaning that there is no immediate connection to the overall series, story wise. However, reading the series is highly recommended because it’s a wonderfully written and illustrated series that is clearly a a labor of love and adds a lot of new layers to our Original Series crew.

Kirk is taking a break from beaming onto planets and punching people, relaxing on a picturesque beach side location when Laura Rhone, Captain of the USS Drake walks up to him and strikes up a conversation. Love is in the air, instantly.  Things start off happily and the two fall for each other deeper and deeper. But when the time comes to take things to the next level, this seemingly perfect relationship takes a turn.

Paul Cornell, a veteran TV, prose fiction and comics writer, pens this issue. If you’ve spent a lifetime reading comics, you come to certain realizations about the medium’s possibilities and limitations. One such limitation is that the thirty pages of a standard comic book are not a lot of space and time. Indeed, it is possible and sadly a reality for some comics, that you could read an entire comic and feel like you got nothing out of it. When finished, you cannot help but ask yourself: why was this necessary? What did it add to the story?

The Valentine’s Day Special’s greatest triumph is that it made me ask the opposite question: how did Paul fit the tale of two lifetimes in thirty pages? By the time the last panel emerges, I felt, much like Picard in the Next Generation episode “The Inner Light,” that I vicariously lived the life of these two people, and it never felt burdensome. Cornell uses words only when needed and instead lets long looks, smiles, hand motions speak with the power of a million words.

Perhaps the best compliment I can give Paul Cornell is that he made this usually stoic nerd tear up. What a great use of the one-shot format.

If you think I’m done singing praises about this book, let me introduce you to Christopher Jones and Charlie Kirchoff. Jones, the artist of comics like Batman, Avengers, Doctor Who, brings his expertise to Star Trek and the results are just delightful. Jones draws characters from our Trek universe with a hand that echoes a familiarity that must come from decades of practice, which cannot be because this is his first Star Trek comic! Justice is done to the faces and ships but a challenge that comes with tales of love is the addition of gorgeous settings and backgrounds. Jones doesn’t buckle; he delivers eye-pleasing and calming environments that this reviewer would really appreciate in PC wallpaper form.

The Kirk of Jones’ pencils is supported strongly by the Spock of Kirchoff’s colors. There is a neon infused glow to the color in the series that is futuristic and strangely timeless. We jump from the Enterprise to Drake and Jones-Kirchoff add subtle differences to the interiors and exteriors of the ships that, while giving us the Trek ship feel, illustrate who Kirk and Rhone are through their ships. 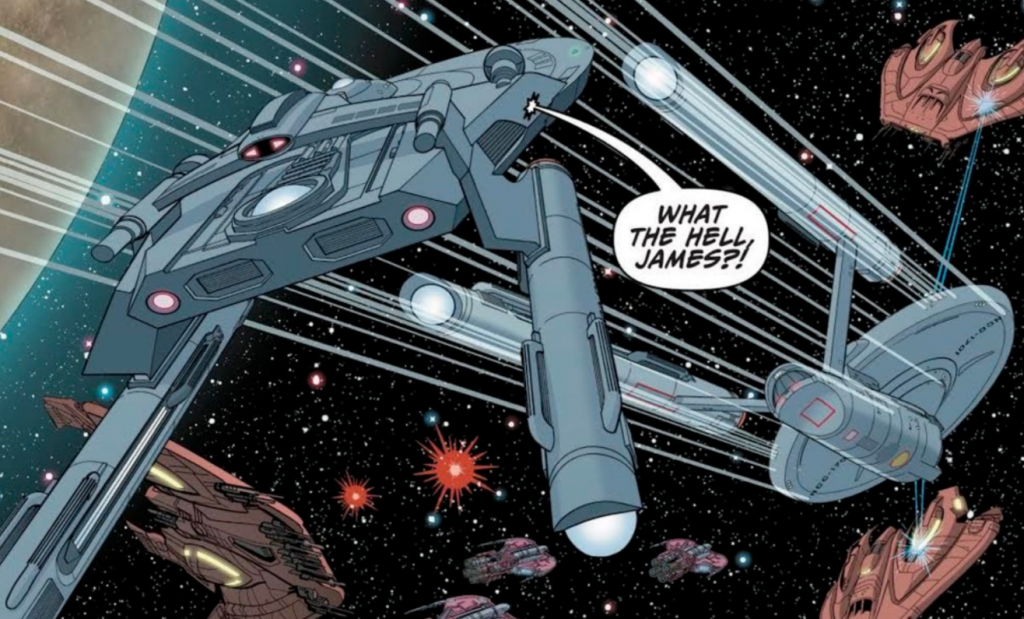 The last few years of Star Trek comics have been an embarrassment of riches. Year Five is at the top of that mountain of comic gold we have been getting. With Star Trek Year Five: The Valentine’s Day Special, the Lanzing-Kelly-led team of creators prove that tricky themes like love, is Mission Possible for them.

Take a bow, Cornell and Jones. Forget flowers and chocolates, this comic is the perfect gift to pamper your Trekkie partner. 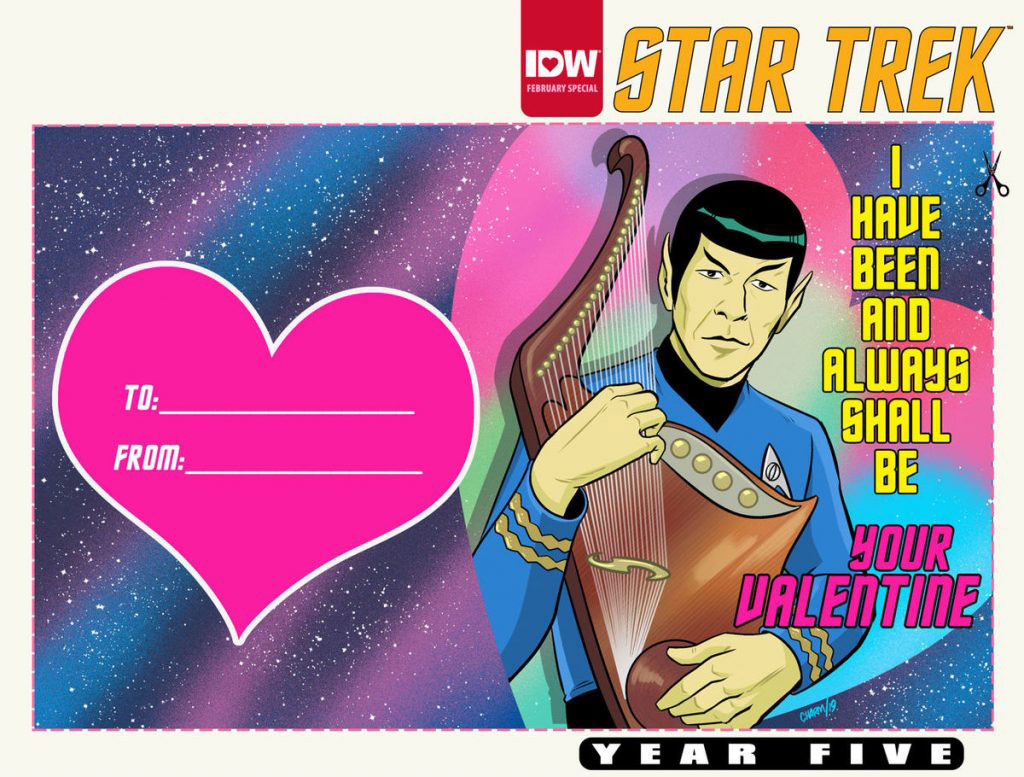