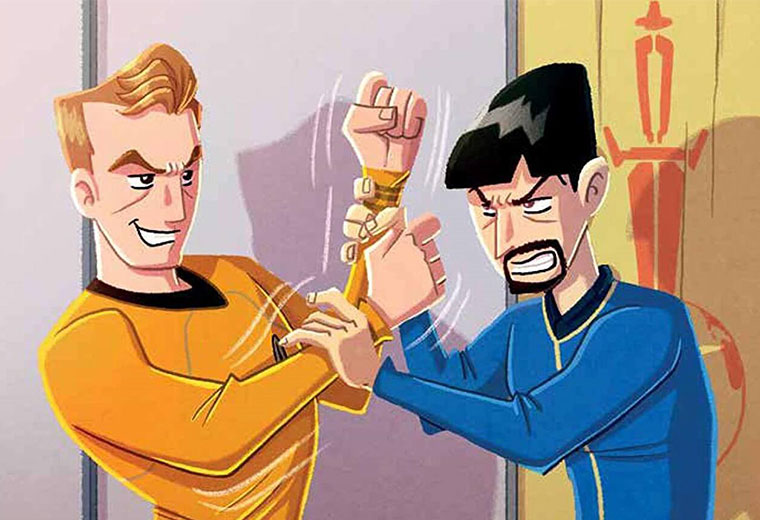 Star Trek: Kirk Fu Manual, an illustrated instruction guide that breaks down some of Kirk’s most popular combat moves, pulls you in with humor and keeps you locked down to the floor with originality and fascinating art.

I am always up for a good joke book. Transport me out of this world using clever caricatures with your Mad Magazines. Get me ROFL-ing, as the kids would say, with your hilarious memoirs. Have me spitting out coffee from my mouth with your totally un-ironic Twitter hot takes. You can even hit me with a classic dad joke book and I will respond with a soft chuckle.

If you expect that these books will stay with me the way Mirror Broken or Discovery: Light of Kahless does, though, you’re expecting a little too much. When I looked at the cover to this book the first time – a smirking Kirk taunting you in a fight pose against the backdrop of a bunch of tiny Kirks in various fight poses – I knew this was going to be a funny book. The captivating cover art signaled that lot of visual goodness awaited inside. What I wasn’t expecting, which the manual knew and took total advantage of, is that amidst the humor there would be real life lessons about combat readiness and basic fighting and sincere, powerful notes from Captain Kirk himself about how these experiences transformed him.

Much like a receiver of the “Kirk hip throw,” I was floored.

The Kirk Fu Manual is part of the Starfleet manuals passed out to students during combat training. The book outlines, in great detail, certain remarkable moves that have saved Kirk’s life over his long, unpredictable career. Apart from the instructions that start out with basic poses that any of us can do (no previous Gorn fighting experience required), Kirk Fu Manual gradually ups the ante on both the complexity of the move along with the severity of the situation while keeping things engaging with philosophical musings on combat, survival, and how to switch up your moves for when the alien doesn’t have a humanoid anatomy.

There is also an inherent honors system that the guide expects all us  Starfleet students to adhere to. After you have practiced the moves over and over and over till you’re confident in your skills, a certificate of completion is attached at the end for you to proudly display as proof of your combat readiness.

Seriously, this book has everything.

Everyone knows the fighting in pre-2009 Star Trek movies and shows isn’t on par with John Wick. Audiences have enjoyed picking on the simple one/two punch and throw combat style. Kirk Fu Manual‘s greatest strength is turning what might have looked laughably simple on screen and turning it into a practical tactical combat move. Yes, the book is about Kirk’s moves, but on another level, it works as an answer, a counter narrative to all those who question the legitimacy of classic Trek fights. Where the mockers go low, Kirk Fu goes high. Like a flying drop Kirk level high.

It is no surprise that the book is penned by Star Trek veteran Dayton Ward. Ward has been writing great Trek novels for over a decade now and takes a well deserved break from the seriousness to laugh it up with the rest of us here. The writing is scattered, literally and metaphorically, across the book. It ranges from stoic text you’d find in the pages of a manual like this to concise instructions that compliment Cornia’s art to heartfelt excerpts from Kirk’s Personal Log which are moving and add to the sincerity of this book.

Ward transitions well through all of these styles and goes above and beyond the clearly well researched breakdowns of the moves to deliver a thoroughly re-readable narrative.

You know you’re having a good time when you’re stuck between deciding whether the writing of a book is superior or its art. This is the first publication venture into Star Trek for Christian Cornia but you wouldn’t know that from the illustrations in this book. Cornia sprinkles some of the magic he brings from his long runs on Scooby Doo and Warner Bros. character based books and the results are delicious. With a seemingly simple but effective take on the look of Kirk, Cornia makes our beloved Captain his own and perfect for replacing the usually faceless mannequins we’d see in instructional guides/videos. Can we request the universe to Ctrl+H all the figures in otherwise boring step-by-step guides with this Kirk?

Cornia accompanies each of the combat moves’ introductions with recreations of a classic Trek scene depicting Kirk applying the move. The art here levels up from the stick figure like style of the instructions to beautiful paintings that could be submitted as concept art for when the creators were putting TOS together.

Come for the combat moves, stay for the enchanting portraits.

STAR TREK: KIRK FU MANUAL doesn’t rely on its humorous premise as an expectation for your buck. Instead, by bringing sincerity, attention to detail, humility and a strong defense of simplicity in combat, Kirk Fu Manual works hard to earn your money and then some.

Stay tuned to TrekNews.net for all the latest news on Star Trek books, along with television series Star Trek: Picard, Star Trek: Discovery, Star Trek: Lower Decks and Star Trek: Short Treks. Connect with us at @TrekNewsNet on Twitter, @TrekNews on Facebook, and @TrekNews on Instagram.