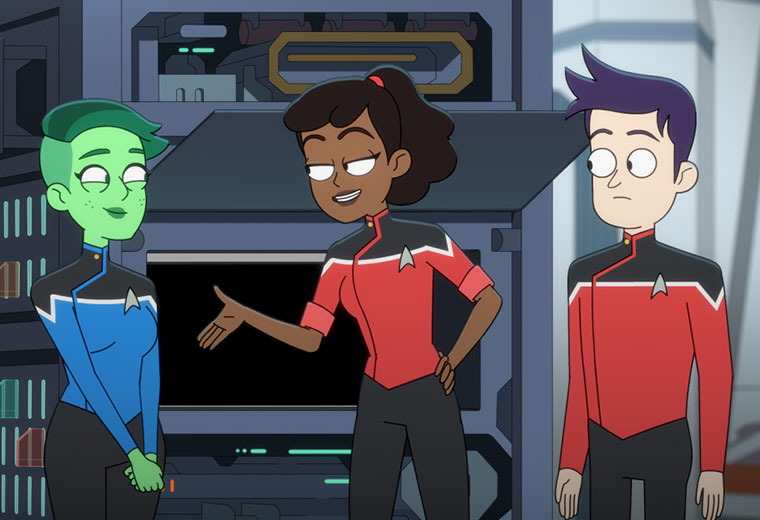 Note: this review does not contain major spoilers for Lower Decks‘ premiere episode, but instead only makes cursory references to themes or elements of the episode. Consider it safe to read if you haven’t watched it.*

Enough with the background. Here’s the bottom line: If you are worried about how this show will fit with the shows we know and love, don’t worry. Lower Decks‘ pilot, “Second Contact,” sets a great first impression for this highly-anticipated series, as it combines fast-paced humor, a self-reflexive awareness of Star Trek history and culture, and a pleasing art style to grab the attention of old and new Star Trek fans alike. 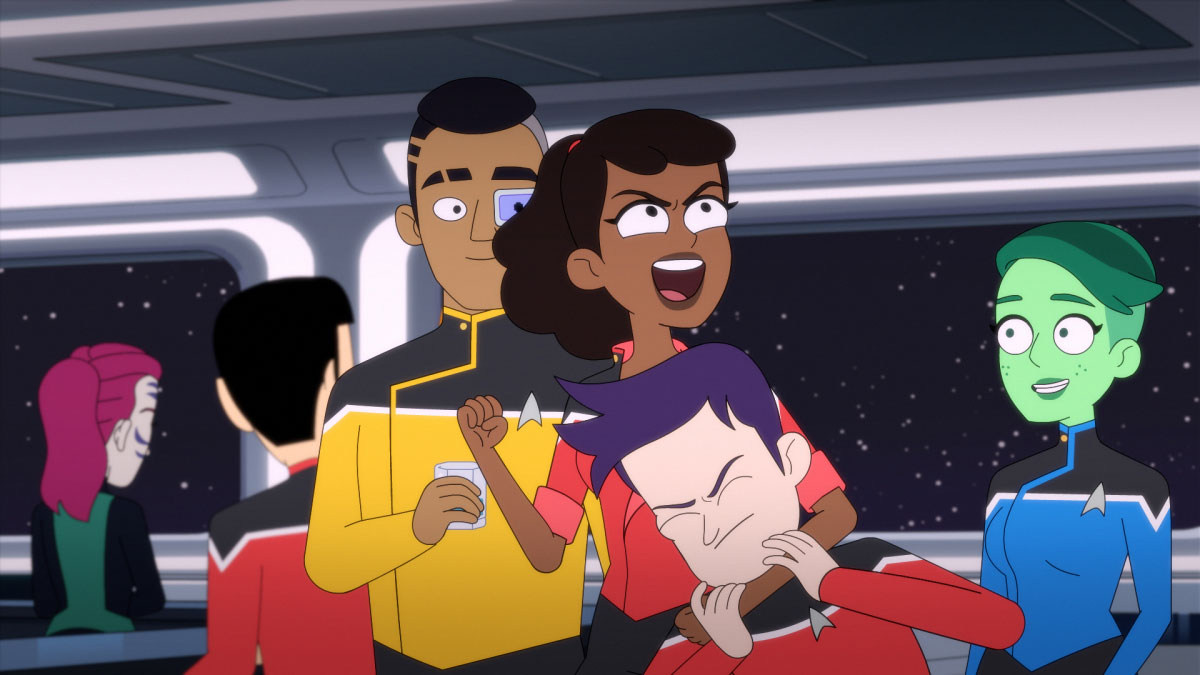 Let’s start with the intro credit sequence, a staple of past Star Trek shows. Lower Decks’ sequence smartly parodies aspects of other Star Trek intros, and places the hero ship and crew in the context we expect: they are not the front-line legends like we know and love. For example, we see the Cerritos gracefully traveling near a star intertwining with a black hole, a la Voyager‘s majestic intro, but this time the ship helplessly gets swept away in the current connecting the two interstellar entities. Likewise, the Cerritos approaches a fierce Romulan-Borg battle, only to turn tail and run. Of course, we are used to the heroes charging into battle bravely, but it’s clear this crew are a different sort of heroes. They are the unsung heroes of the Federation, and you’ll likely chuckle as we grow accustomed to seeing this new side of Starfleet officers.

This show’s main characters prove to make a great first impression, not only because the actors and actresses perform well, but because of how these characters fit into Star Trek culture. The leads playing the lower deck ensigns – Eugene Cordero, Jack Quaid, Tawny Newsome, and Noël Wells – quickly endear themselves to the audience by ably settling into their characters. But upon closer inspection, it’s clear that these characters’ archetypes reflect different categories of Star Trek fans. 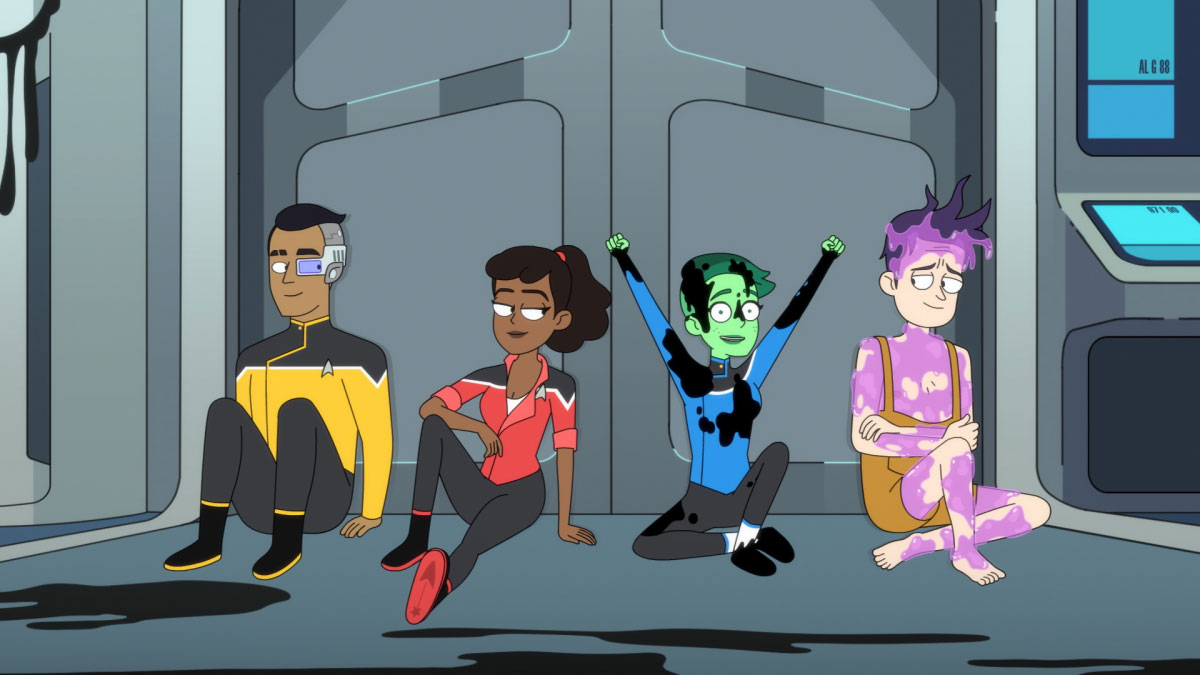 Brad Boimier (Quaid) represents the Star Trek fan who has stayed by the franchise for years and has thoroughly bought into its virtues, lessons, and morals despite its flaws – but will that start to change for him? Beckett Mariner (Newsome), a rebellious ensign who has served elsewhere in Starfleet, represents the hardened fan who may have become disenfranchised by Star Trek over the years and is quick to criticize it. D’Vana Tendi (Noel Wells), the new kid in town, represents the novice fan who may have just recently been introduced to the franchise. And the emotionally volatile Sam Rutherford (Cordero) is the fan who is looking for something different from the franchise and finds it (temporarily) amid the chaos of the ship’s mission. Keeping this perspective in mind as Lower Decks grows in its 10-episode first season and beyond, it’ll be interesting to see how these characters mature and if these archetypes change.

If the pilot is any indication, Lower Decks won’t exclusively focus on the ensigns, but rather how these ensigns interact with the Cerritos‘ command staff. Dawnn Lewis heads the ship as Captain Carol Freeman, who inadvertently helps prove some of Mariner’s misgivings about Starfleet. Jerry O’Connell (who happens to be married to Discovery‘s Rebecca Romijn) plays Commander Jack Ransom, a Kirk-esque rough-and-ready first officer who heads the titular second contact mission. Voice actor veteran Fred Tatasciore is cast as Lt. Shaxs, a massive hulk of a man who sees plenty of action in this episode, and finally, Gillian Vigman rounds out the command staff as Dr. T’Ana, who gets the spotlight by helping solve the crew’s major dilemma. By looking through the eyes of novice Starfleet officers, perhaps we’ll start to question how these veteran officers operate. It’s an interesting lens and opens many possibilities for Lower Decks.

Marking the 779th production of Star Trek, it would be easy, and understandable, for Lower Decks to feel stale out of the gate. However, “Second Contact” refreshingly produces a new and different look for Star Trek, thanks to the solid production team at CBS Eye Animations who aptly pull elements from past Trek into a new package. Franchises that have been around for years inevitably turn to self-reflexive humor as a testament to their longevity, and now it’s Star Trek‘s turn. It’s a welcome direction for the franchise, and evokes a quote from Christopher Pike in Discovery‘s season two premiere that may as well be Lower Decks‘ mission statement: “Wherever our mission takes us, we’ll try to have a little fun along the way.“

New episodes of Star Trek: Lower Decks are released on Thursdays on CBS All Access in the U.S. The series returns next week (August 13) with the second episode “Envoys.”