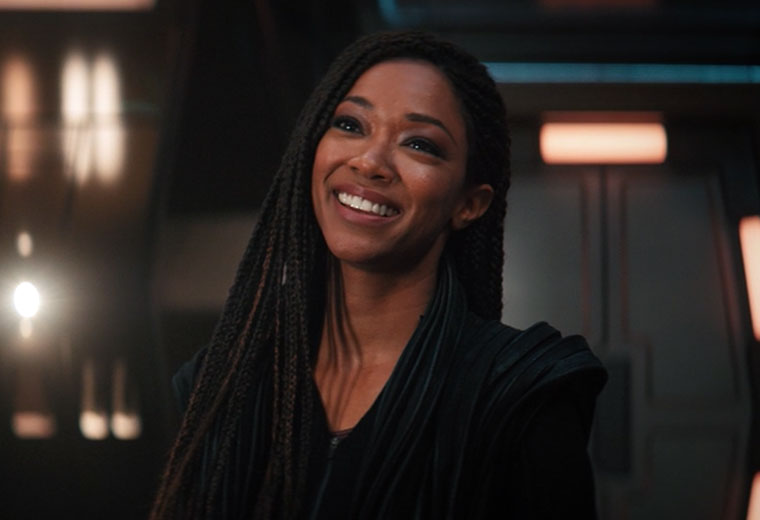 By the virtue of early access and the happenstance of TrekNews watching “People of Earth” on October 24, that means we unwittingly watched this episode on the 29th anniversary of Gene Roddenberry’s passing. It’s fitting, then, that “People of Earth” so artfully represents Roddenberry’s major theme of his creation: conflicts can be solved by talking. Before we get to why and how the episode makes this possible, we want to give kudos to writers Bo Yeon Kim and Erika Lippoldt for skillfully crafting a narrative that portrays Roddenberry’s vision so well, as well as director Jonathan Frakes for bringing the story to life.

At the end of last week’s episode, Burnham was reunited with her Discovery family, so this episode begins with her telling her crew what she has done in the last year, and how the galaxy came to be in the state it’s in. After Burnham’s narration, we get a cool little shot of several futuristic Federation ships as they suddenly explode thanks to the still-mysterious “The Burn.” While we know that “The Burn” was the moment that all large quantities of dilithium in the galaxy became unstable and exploded, causing millions of death and the defragmentation of the Federation, we still don’t know much else.

In their quest to find out more about the state of the Federation, Discovery picks up the signal from Federation Admiral Tal that is 12 years outdated, but it gives them a mission: go to Earth, the home of the Federation as they know it. The planet is just a quick spore jump away, after all. But, things aren’t what they expect when they approach the planet and learn that the Federation is no longer headquartered on Earth. Now, the planet is the home of the United Earth Defense Force (UEDF), who took over ownership of the planet when the Federation left in an effort to protect Earth. Discovery lands right in the middle of a conflict between the UEDF and dilithium raiders, a pirate group of strange, armored humanoids that targets any Earth ship they can.

In facing this threat, the Discovery has a new captain. Yes, after three seasons of hinting who will ultimately land in the captain’s chair, the person who finally officially takes command of Discovery is Saru (Doug Jones). Of course, other people have sat in Discovery‘s captain’s chair, but in the case of Lorca and Pike, these were season-specific characters who were never a “true” part of Discovery‘s crew. So, this is a major moment, as Saru now joins the likes of Kirk, Picard, Sisko, Janeway, and Archer as the captain, literally and figuratively, of a Star Trek series.

Saru is a great choice, as not only is he a fan favorite and acted so nimbly by Jones, but this allows Burnham – at one time the quintessential Starfleet officer – to explore her post-time jump self. As she explains in this episode, the year apart from her crew really altered her character. Partnering with Book (David Ajala) in the courier business, she is now more prone to being a renegade, which she demonstrates in her plan to save Discovery and settle the conflict between the people of Earth. Now that her friend and former competitor is in the center chair, we’ll see if/how Saru and Burnham’s relationship changes during this season.

Roddenberry’s vision comes to light in this episode through the new captain himself. Saru’s peace-keeping ideals are shown as he deals with the dilithium pirates, and most notably when he brings the competing leaders of the Earth conflict together. Shouting phrases like “Starfleet doesn’t fire first” and ordering the Discovery in between the two combatants is quintessential Starfleet. Upon the revelation that the raiders are indeed people once of Earth, Saru takes the opportunity to remind the two groups that any conflict can be solved if one is willing to espouse compassion and understanding. As he says, “it’s time to stop making assumptions, and start listening.” It’s a lesson that we’ve seen many times in Star Trek, and it’s the basis of Roddenberry’s utopian vision.

“People of Earth” also introduces a new cast member to Discovery‘s roster: Blu del Barrio as Adira, a member of the United Earth Defense Force with a secret of their own. (Barrio, of course, made waves as the first non-binary cast member in Star Trek history). As it turns out, the Federation admiral Discovery is looking for is actually inside Adira. The slug-like Trill symbiote apparently transferred to the young officer before the admiral’s supposed demise, so now Adira joins Discovery to find the current Federation headquarters, wherever that might be. Adira has already established a rapport with Paul Stamets (Anthony Rapp), and we get the feeling the two will foster a brother/sister or parent/child dynamic. The upbeat, youthful music that soundtracks Adira’s lengthy conversation at the end of the episode with Stamets reinforces the notion that they are an innocent young person making their path in the galaxy, despite their first impressions with the Discovery crew.

Taken together, the creative team behind “The People of Earth” tells a wonderful Star Trek story as Discovery continues its voyage in the future. Questions still linger as to where the Federation is now, but with Saru in the center seat, we are excited to see how Discovery manages. We’re also wondering how long the show continues the “will they, won’t they?” dynamic between Burnham and Book, and how big of a part Adira plays in Discovery‘s mission. So far, Discovery is killing it this season, and we’re only feeling better and better about Discovery‘s time jump thanks to this episode.