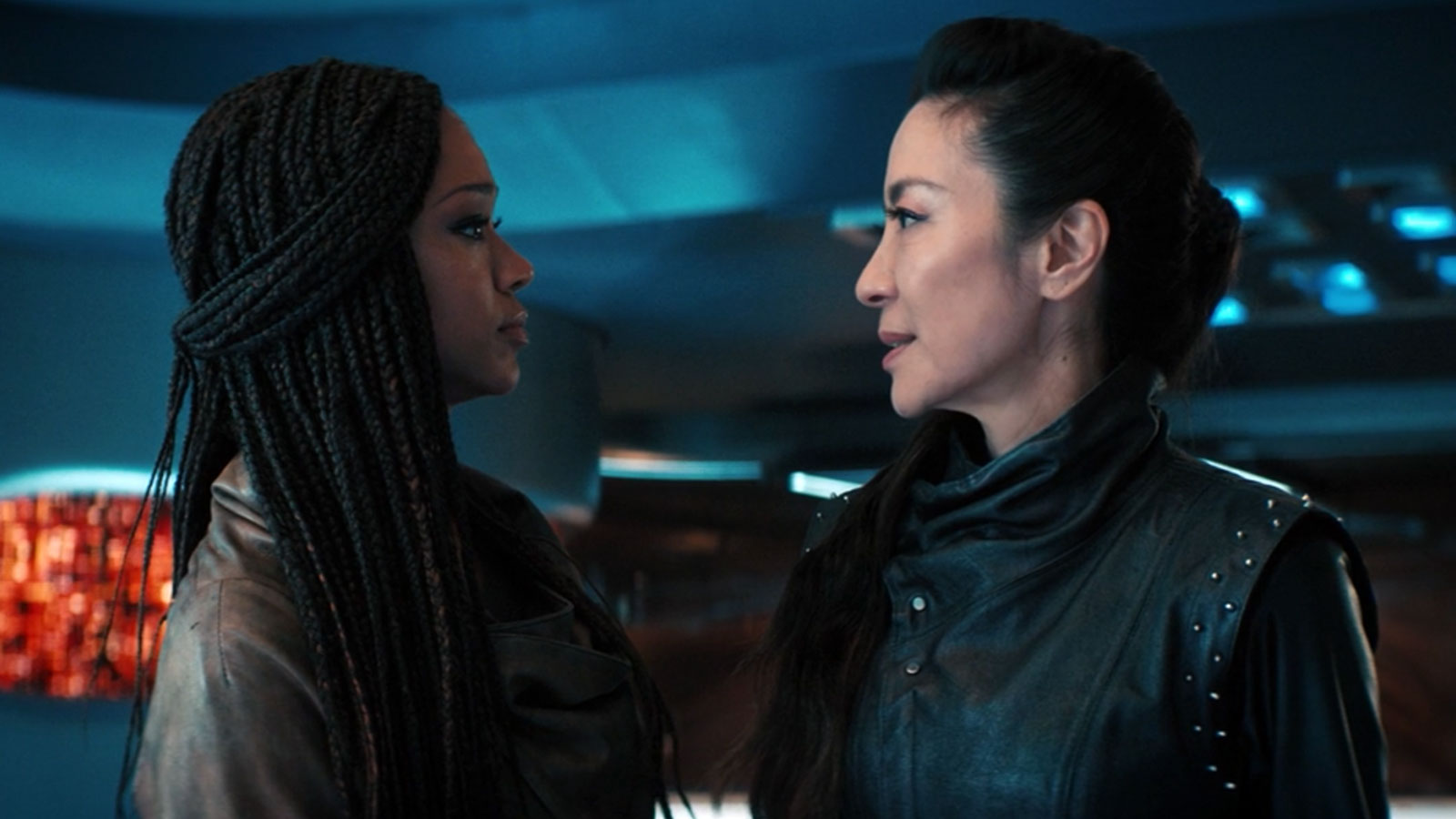 If there was any doubt that Michael Burnham (Sonequa Martin-Green) wasn’t a changed person thanks to her time in the future, “Scavengers” closes the book on that argument. Teaming up with Phillipa Georgiou (Michelle Yeoh) to rescue the recently captured Book (David Ajala), Burnham defies her captain’s orders and puts Discovery and the Federation at risk.

Before we get into that major plot story, this episode starts off with a really cool look at the refitted Discovery, now complete with a new registry number: NCC-1031-A. Now that the ship is a trusted and active part of Starfleet, she has been refitted with futuristic technology inside and out, including detached warp nacelles and programmable matter in her consoles, giving the entire ship a futuristic appearance in line with what we’ve seen thus far in the season. Star Trek nerds will go crazy for these nifty changes, and we can’t wait to see the “new” ship in action.

Shortly after we see the refitted Discovery, Federation headquarters gets an unexpected visitor: Book… or at least his ship, manned only by his huge cat, Grudge. It turns out Book was captured and sent to work in a mining camp by the local pirate gang, and while Burnham wants to go rescue him, her superiors, including Saru (Doug Jones) and Admiral Vance (Oded Fehr), tell her no. Discovery has proven to be a valuable part of the Federation’s post-Burn recovery efforts, and they can’t afford that kind of rescue mission. But of course, Burnham decides to go anyway, enlisting the help of the only other person who would go against the rules: Discovery‘s resident former emperor.

But all is not right for Georgiou. As the previous episode hinted, she is experiencing some kind of mental issue, but in this episode, we see the extent of her, shall we call them, mental lapses. At seemingly random points, Georgiou is incapacitated by vivid, flashback-esque scenes from what we suppose is her mirror universe life. These scenes are bloody and painful, and at the climax of the episode, they even temporarily stop Georgiou from saving Burnham in a fight. To Yeoh’s credit, she is able to play these moments of vulnerability well against her character’s typical macho attitude, and we eagerly await an explanation as to what these flashbacks are and why they are happening. Perhaps they have something to do with the Mirror Universe now being farther apart from the regular universe, as Kovich (David Cronenberg) claimed in the previous episode?

In any case, Burnham and Georgiou arrive at the planet Hunhau where Book is enslaved by the Emerald Chain and pose as powerful merchants looking for salvage. We can’t help but think Hunhau is more representative of the state of the post-Burn galaxy, where most places are gritty, dour, and not at all as spectacular as places like Starfleet Command. Kudos to the show’s production team for creating such an illustrative environment. Once Burnham and Georgiou find Book, they orchestrate a prison break to not only save Book but release the other enslaved workers. What follows is a fairly predictable prison break sequence, complete with Book going out of his way to help a friend he made while in captivity.

With Book safe and the rescuers heading back to Federation headquarters, it’s time for Burnham to face the music. Admiral Vance is not too happy that Burnham left the Discovery without a First Officer, as there was a chance the ship could get called away at any time to deal with a crisis. For her part, Burnham does seem regretful, but we get the sense she might be regretting, or at least acknowledging, her “new” personality, and not the fact that she launched a rogue mission.

Martin-Green, like every other scene she is in, shines as a deeply conflicted Burnham, especially when Saru delivers the killing blow: the fact that she will no longer serve as First Officer. As he claims, the relationship between Captain and First Officer relies on trust, and this is something the two of them no longer have. To her credit, Burnham agrees with Saru’s assessment, which speaks to just how much she realizes she has changed. We remember back when this show started that Saru and Burnham’s relationship was mired in a mix of respect and animosity, and over time the animosity distinguished. Perhaps we’ll get that combative mix again?

In any case, while tension on the bridge remains high, the sexual tension between Book and Burnham finally reached a head, as the two finally stop the “will they, won’t they” dynamic and begin a romantic relationship. It was a long time coming, and it only makes sense that Burnham is attracted to someone who – thanks to their shared exposure to life in the 3100s – is more like her than anybody on Discovery. Both Book and Burnham are products of their time, and we bet they have plenty more rebellious actions to take together as the season goes on.

Elsewhere on Discovery, Adira (Blu del Barrio) confides in Lt. Stamets (Anthony Rapp) about her invisible friend, Gray (Ian Alexander). Gray is a remnant of the Trill symbiote inside Adira, and while that’s at first a little strange for Stamets to digest, it’s clearly not the weirdest thing to take place on his ship. As such, Stamets is perfectly welcoming of what Adira is able to relate about Gray, and Gray in turn immediately forms a connection with the engineer. In light of the recent tension between Discovery‘s command officers, such as the Burnham/Saru fallout or the consequences of Saru’s dinner party, this bond the trio shares is a welcome breath of fresh air for those who just want to see the crew get along.

Taken together, “Scavengers” showcases a few major character developments, most notably is what exactly is wrong with Georgiou. Her terrifying spells of incapacitation mean trouble for all around her, and it surely is unusual to see the character inflicted in such a way. The damaged Saru/Burnham dynamic also means trouble for Discovery, as surely the ship can’t serve the Federation as ably without Burnham and Saru working together well. But on the brighter side, Burnham now has a partner in Book, and hopefully, that means he’ll be sticking around for a while.