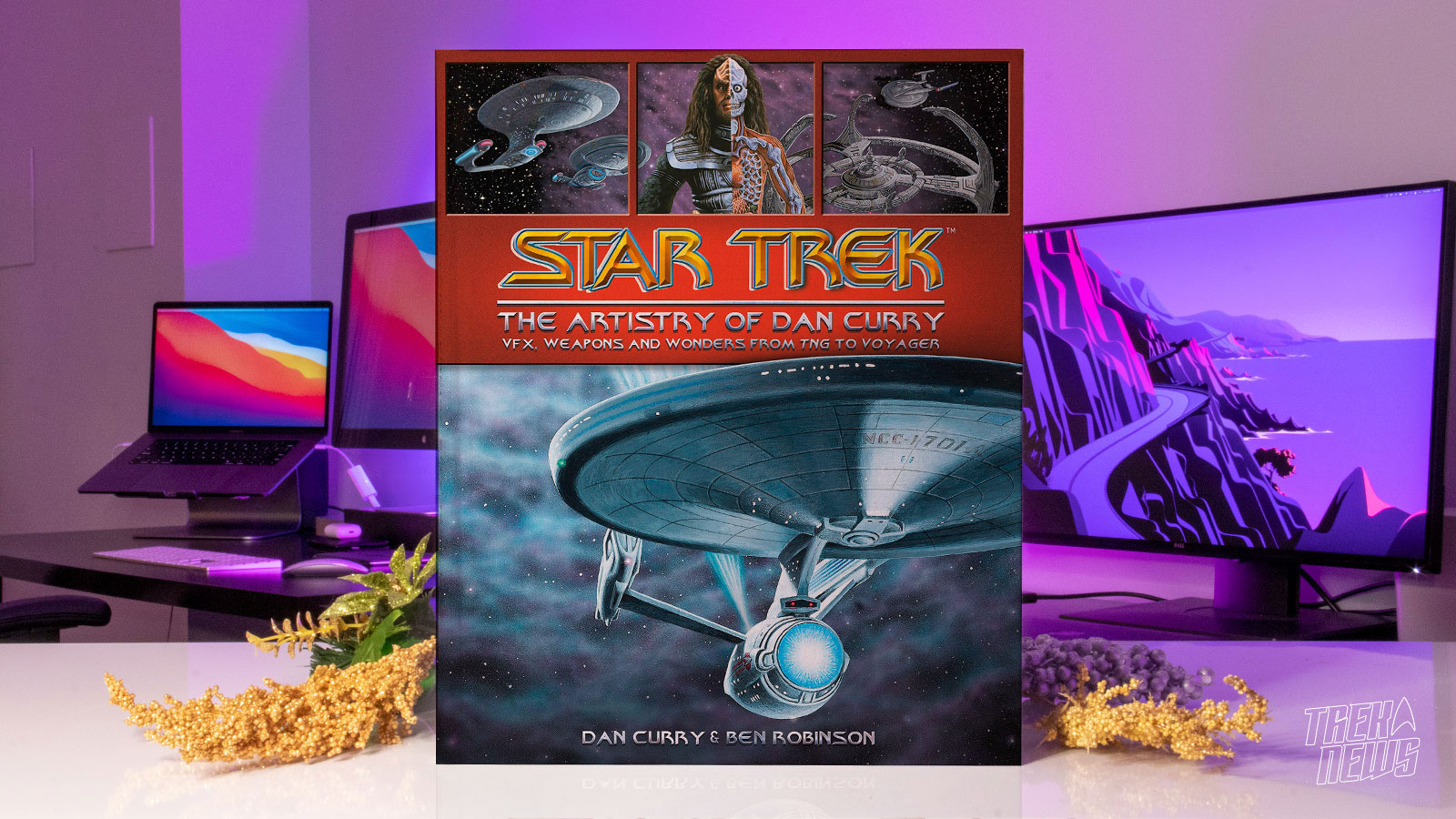 If you only buy one Star Trek item this year, make it Star Trek: The Artistry of Dan Curry: VFX, Weapons, And Wonders From TNG To Enterprise, written by Dan Curry and Ben Robinson and published by Titan Books.

Okay, review over. Wait, you want to know why this book is best-of-year material? Okay, fine. How much time do you have?

First off, it’s okay if you don’t know who Dan Curry is. Only eagle-eyed credit watchers will recognize his name. But like many people over the years who have contributed so much to Star Trek behind the scenes, Curry is one of Star Trek‘s heroes. And that’s not just our word for him; Michael Okuda, the legendary Star Trek designer, has described him that way. Curry was visual effects (VFX) supervisor on The Next Generation and visual effects producer on Deep Space Nine, Voyager, and Enterprise—that’s a lot of VFX over hundreds of episodes. He received seven Emmy Awards, another 12 Emmy nominations, and a host of other accolades.

After reading through this dense, beautifully illustrated book, it’s easy to see why.

Pick an element of Star Trek VFX, and you’ll get to read plenty about it in this book. Curry covers everything you can think of, including video compositing, motion control, explosions, creature designs, body doubles, matte paintings, and title sequences, among many other things. He also touches on his extensive experience serving as a second unit director, which grants its own insights into the production process.

That’s more than 200 pages of diagrams, storyboards, illustrations, model work, VFX trickery, and anything else under the VFX sun. There are a million little awesome tidbits about how the VFX crews pulled both large-scale and small-scale scenes off. If we had to pick a few to spotlight:

These are just three examples out of countless neat revelations in this book. If you find yourself asking “How did they do that?” while watching a Star Trek episode, this book will likely have an answer.

We also want to call out a quick but illuminating part of this book. If you have revisited The Next Generation recently, you’ve probably watched the wonderful remastering done on the series, which bought the entire show into high-definition, making for a much more pleasant viewing experience. Curry devotes a couple of pages in his book to talk about the gargantuan effort to bring TNG to life in this way. This is definitely a must-read section, and it’ll give you a greater appreciation for the massive amount of work needed to revive TNG in this way.

One last thing we’d like to highlight in this book is how Curry includes the “VFX family tree,” a thorough accounting of each VFX studio that helped out for the various Star Trek shows. It certainly isn’t common knowledge how studios like Pacific Ocean Post or Amblin Imaging contributed to bringing Star Trek to life, but Dan makes a point to include them here. This “family tree” speaks to a guiding principle that permeates this book: VFX creation is a team effort, and the authors make every attempt to give credit where credit is due. While Curry’s name is on the cover, and he rightly should take credit for many VFX advances and amazing moments, he had a team of people working with him every time.

Simply put, this is a book Star Trek deserves. It’s full of wonderful insights as the authors chronicle the evolution of VFX from TNG to Enterprise—which, let’s remember, is a long time in the world of technology. You’ll constantly be amazed how much work goes into even the smallest details. We have the highest regard for this book, and it should be on your shelf this holiday.

Star Trek: The Artistry of Dan Curry is now available on Amazon.