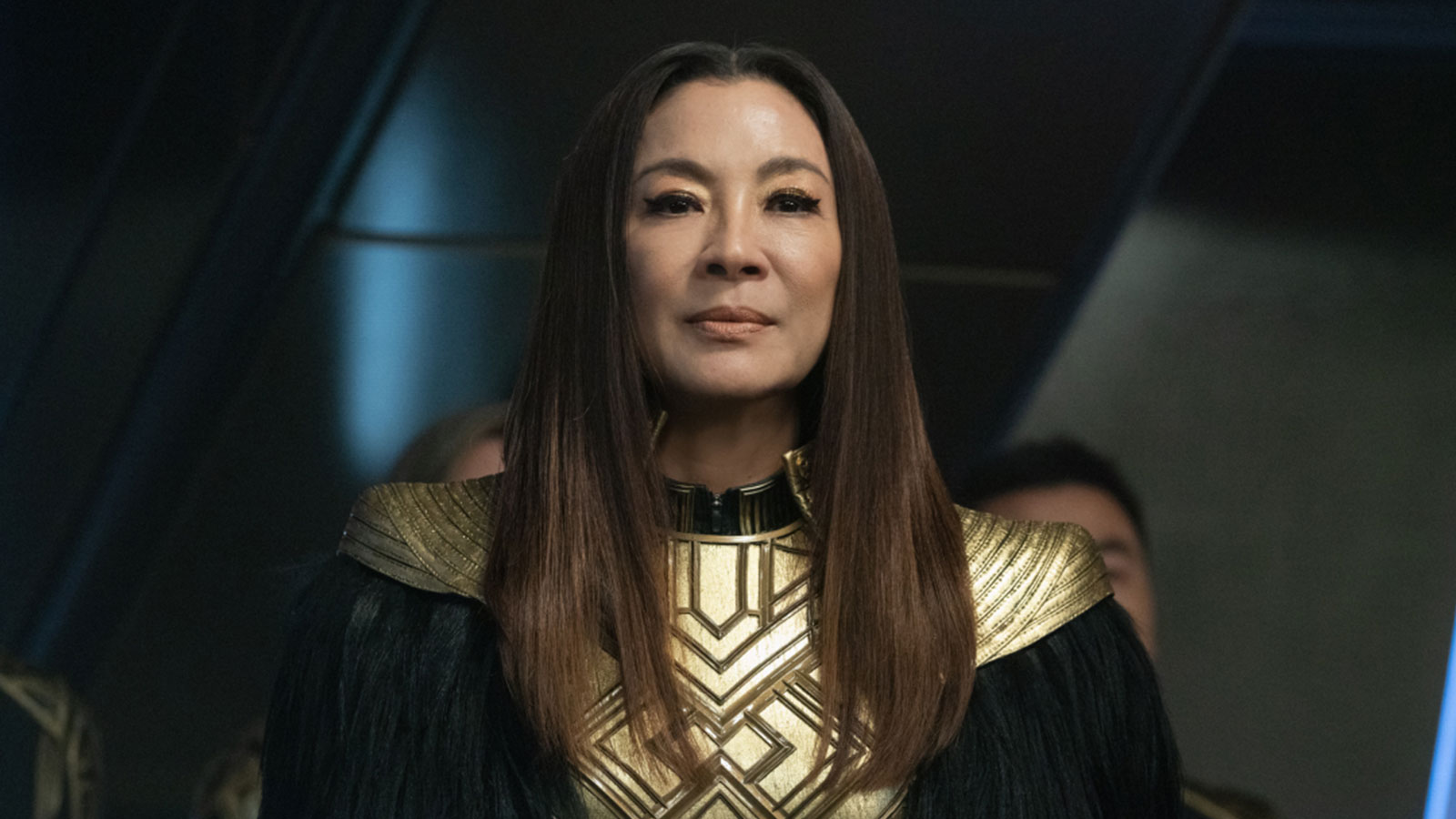 Following an intriguing look into Georgiou’s (Michelle Yeoh) second chance in her own universe, “Terra Firma, Part II” concludes the emperor’s story in a way perfectly in line with the values this show and this franchise represent – and it brings an awesome surprise along the way.

This episode mostly takes place in the Mirror Universe, a fact driven home by the altered credit sequence featuring inverted colors and an upside-down version of the regular credit sequence – an effective but perhaps a little too on-the-nose change.

Georgiou, having just prevented Mirror Burnham’s (Sonequa Martin-Green) attempted coup, now tortures her adopted daughter to try and help her regain her allegiance to the emperor. As Georgiou asserts to her Kelpien assistant, Saru (Doug Jones), trying to change Burnham’s thinking is a better approach than outright killing her, as would be the norm in the Terran Universe. Already, it’s clear how her experience in the Prime Universe changed her Terran ways, and the difference is becoming clearer and clearer to the normal Terran Universe characters.

While we know Georgiou basically adopted Burnham in the Mirror Universe, we see exactly how motherly Georgiou feels toward her now-disloyal daughter. Talking to a tortured, semi-unconscious Burnham, Georgiou reminisces how young Burnham used to suffer from night terrors, and how Georgiou helped her daughter through those experiences by taking to her a field filled with fireflies. Hearing this makes Burnham seemingly re-pledge her allegiance to the emperor, but as we’ve come to expect from the Mirror Universe, peace never lasts long.

To prove her loyalty, Georgiou asks Burnham to name her co-conspirators and kill them, an act Burnham accomplishes with her typical zeal. This means several Discovery officers meet their end, including Ellen Landry (Rekha Sharma), Lt. Bryce (Ronnie Rowe Jr.), and Keyla Detmer (Emily Coutts). Burnham also leads the Discovery to, of all places, Risa, where one of Gabriel Lorca’s lieutenants is hiding out. The lieutenant’s ship is easy pickings for Discovery, and he is soon in the brig being questioned by Georgiou and Burnham. Alas, the lieutenant is nothing but a ploy, another plan of Burnham’s to try and usurp the emperor, and here’s where things take a turn for the unexpected.

Is the emperor surprised by Burnham’s double-crossing, even after her supposed re-pledge? No, and Georgiou is ready to spring her own trap, and soon there’s a firefight in the brig, complete with Saru protecting his emperor in a way we have rarely seen Kelpiens fight. The fight leads Burnham and Georgiou to face off one-on-one in the spacious brig, and ultimately Georgiou lands the killing blow by impaling Burnham’s stomach, effectively killing her beloved daughter. However, Burnham simultaneously lands a brutal blow to Georgiou’s neck, and the emperor soon lays dying in Saru’s arms.

Now more than halfway through the episode, this is where Discovery returns to the snowy planet where Prime Burnham and Mirror Georgiou, following the direction of the Discovery‘s sentient computer, beamed down to find a cure to Georgiou’s temporal sickness. It was there they met Carl (Paul Guilfoyle), the enigmatic man who served as a watcher for a solitary door in the middle of the frozen wasteland. Georgiou snaps out of her three-month-long Mirror journey, while only a minute passed in the Prime timeline. Georgiou’s holographic wrist computer shows her vital signs over the course of three months, so exactly how Georgiou was able to re-live her Mirror Universe experience while remaining connected to the Prime timeline is confusing, and the pair demand answers from Carl. Who is this mysterious man? As Carl announces in a booming voice: “I am the Guardian of Forever!”

Whoa! Yes, it’s that Guardian of Forever, the one from the classic The Original Series episode “The City on the Edge of Forever.” This revelation isn’t terribly surprising if you caught on to Carl reading The Star Dispatch in the previous episode, which also has a substantial connection to the aforementioned episode, but seeing the Guardian brought to life in this show is such an awesome nerd moment.  It maintains its signature look while being updated for modern audiences, and kudos to the show’s designers for striking that delicate balance.

Knowing the Guardian’s power, it makes sense how Georgiou was able to travel back to her universe while staying in the Prime world, but why did the Guardian choose to send Georgiou back, considering her temporal sickness still isn’t cured? As Carl explains, Georgiou was being tested. Would she live her life in the same tyrannical, unrelenting way she originally did? As we saw over the course of these last two episodes, she didn’t. She chose to spare Burnham after the failed coup and tried to break away from her typical tyrannical Terran impulses. The Guardian was impressed, so he offers to send her back to a place and time where the Prime and Mirror Universes aren’t so far apart.

The Guardian also answers questions that fans might have as they remember the aforementioned TOS episode: what is the Guardian doing on some remote planet in the Gamma Quadrant, and why is Carl the manifestation of the entity when in its previous appearance the Guardian was only the portal itself with a disembodied voice? It turns out competing factions tried to use the Guardian during the Temporal War, with some horrible results. So, it (he?) chose to seek refuge away from those who might try to use its awesome power. It’s only because Discovery has both the Sphere Data and databases from the present and past Federation that it was able to identify where the Guardian was located.

After a tearful goodbye where Burnham maintains that even the Mirror Georgiou was like a mother figure to her, Georgiou steps through the gateway. While we don’t know where or when she landed, it’s safe to assume that wherever she lands, she’ll be ready for her still-untitled Section 31 series.

We find it remarkable and commendable that Discovery’s writers – including this episode’s writers Bo Yeon Kim, Erika Lippoldt, and Alan McElroy – were able to take a Mirror Universe villain and allow her character to gradually morph into something more akin to the Prime timeline characters we know and love. The transition shows how positively impactful Discovery’s crew can be, which is a perfect Star Trek­-esque theme. Who could have predicted that the emperor of the Terran Empire could find some measure of redemption? We’re super interested to see how Yeoh will play her character in the upcoming Section 31 show; will she maintain and promote the more positive aspects of her character, recognizing that it was that change that allowed the Guardian to send her away, or will the vestiges of her Mirror Universe life continue to permeate her very being? Considering the nature of Section 31, we’re willing to bet it’s both.

This episode is rounded out by more movement on Discovery’s quest to learn more about the Kelpien ship at the center of the source of the Burn. Thanks to a timely contribution from Book (David Ajala), the crew are able to use Emerald Chain technology to access the Kelpien ship’s systems. We saw last week how Book was eager to find his place within the crew, and while originally that meant learning to become more like a Starfleet officer, Book maintains that because he has outside contacts and information that may prove useful to Starfleet, he should operate outside the system, something Admiral Vance (Oded Fehr) and Saru agree to.

Taken together, this was a pretty great episode. Besides the awesome return of a classic Star Trek entity, “Terra Firma, Part II” will likely enter Star Trek history as a fantastic, deeper look into the Mirror Universe. Using Georgiou as a lens through which to view the more complex nature of traditionally one-dimensional characters, Discovery’s writers prove that no one is above some level of redemption – a wonderful Star Trek lesson if there ever was one.