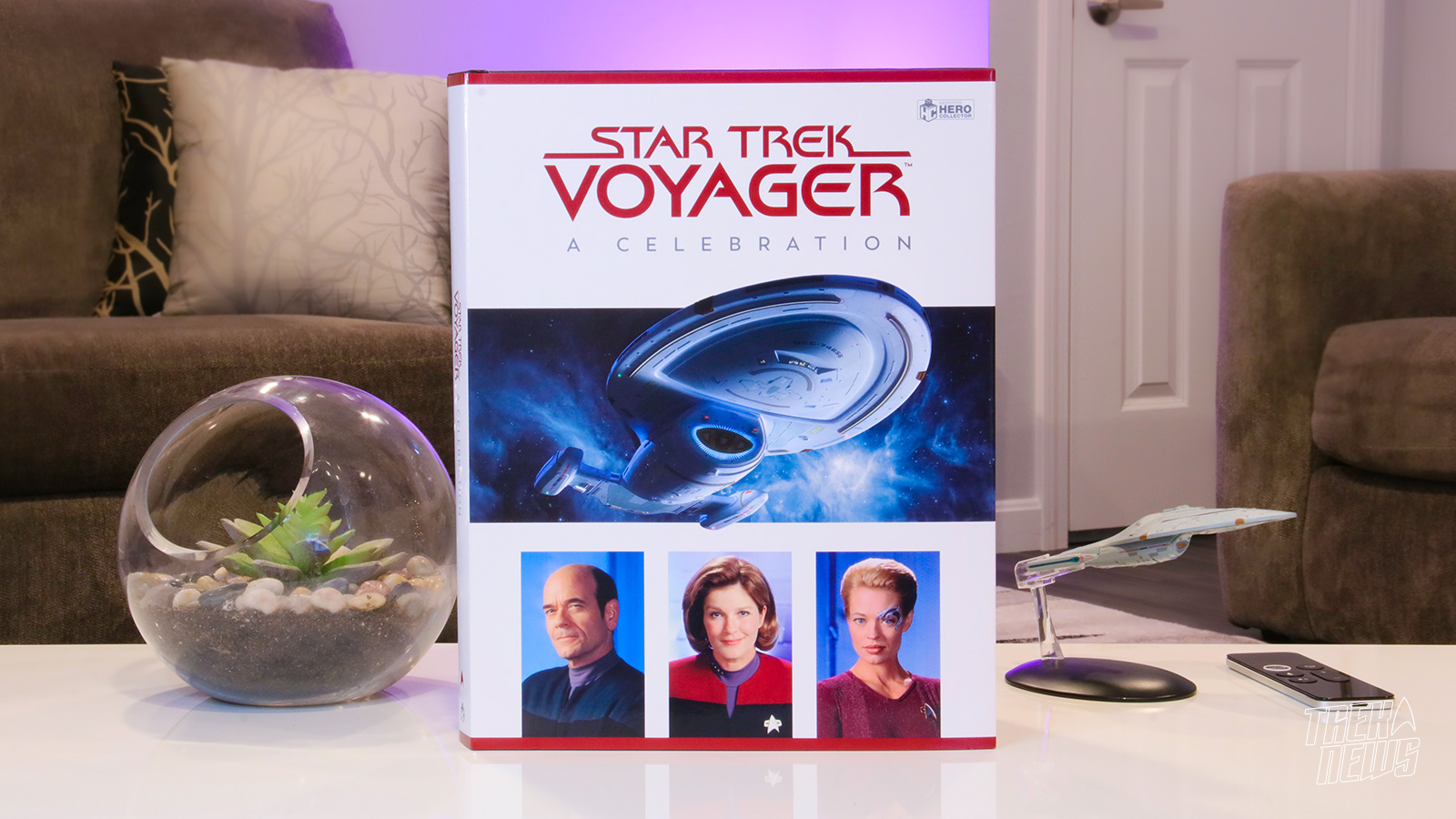 To appreciate Star Trek Voyager: A Celebration on a deeper level it is necessary to go back a few years before the series even debuted. Star Trek: The Next Generation had the benefit of a global audience waiting with baited breath for Star Trek’s return to television, following an eighteen-year absence. The show’s extraordinary success brought the franchise back into pop-culture. It rallied a blitzkrieg of Star Trek films, books, comics, and toys. History would have you believe (and had me convinced for the longest time) that Deep Space Nine, the series that immediately followed TNG’s run, was the show that had the steepest hill to climb leading up to its release. But the truth is that while the road to the pilot episode “Emissary” wasn’t easy for DS9, it had some major benefits in its corner. TNG was going stronger than ever. Patrick Stewart‘s face was on the cover of major magazines. You could still go to a toy store and buy Worf, Riker, Troi and Geordi in plastic form. The TOS crew had bowed out with Star Trek VI: The Undiscovered Country, not too long ago. It was those strengths that encouraged Ira Steven Behr and Michael Piller to take big risks with DS9.

Deep Space Nine launched in 1993 with strong ratings but the show was divisive — at least in the beginning. The response to the its first few seasons was not unlike that of Star Trek: Discovery in its initial season: a lot of love, and some very loud detractors. By 1995, TNG’s crew had bid us adieu—at least until the feature films. The Original Series was a fading memory. The only Star Trek series we had was grounded inside a space station. When Jeri Taylor and Michael Piller were given the green light to concept a new Star Trek series, they knew two things: the series’ lead — our next captain — had to be a female, and this show was going to be a steep uphill battle — one unlike anything they had ever faced.

That is where Star Trek Voyager: A Celebration starts. In its pages are words and pictures that tell the incredible tale of a sci-fi show’s seven-year journey. Along either side of the road that led to Voyager becoming a television staple there lie difficult beginnings, stops and starts, personal challenges, bad luck, big swings, and big misses. Quite a few things went wrong for Voyager. But when it seemed to matter most things went right for Voyager too. Kate Mulgrew as Janeway, an undaunted writing team determined to tell new Trek stories, innovations in production design and VFX, Jeri Ryan‘s Seven of Nine all added essential fuel to not only Voyager‘s need to keep stories fresh but also its evolution as a storytelling vehicle.

All the important elements you’d expect in a behind-the-scenes book are in Voyager: A Celebration. Eye-catching production images of the cast and crew, props, sets, concept art, and more are embedded in almost every page. A third of the book breaks down the multilayered, complex nature of the show’s production. The design of the ship, the art and costume departments, the development of the show’s theme song and more all have their own chapters that provide valuable insight into Voyager‘s production. These chapters would have been worth the book’s price alone but the writers Ben Robinson and Mark Wright, much like the ship they are celebrating in this book, go further.

Ben Robinson and Mark Wright, both writers with decades of experience in Star Trek and sci-fi, conducted thorough interviews with the series’ writing team, resulting in a valuable section of this book that the next third is dedicated to its stories. In chapters titled “Key Episodes,” the duo along with the writers deconstruct important episodes of Voyager. “Scorpion,” “Tuvix,” “Future’s End” and more are revisited. Every episode’s theme, its characters, its challenges and accomplishments are explored and what emerges from these chapters can be enjoyed both as studies of some of the best Voyager episodes and stowed away for future reference reading for those looking for great storytelling advice from industry veterans.

The final third of Voyager: A Celebration is its hidden gem and the one that shines the brightest. The series’ main characters, including Tom Paris (Robert Duncan McNeill), B’Elanna Torres (Roxann Dawson), Tuvok (Tim Russ), Neelix (Ethan Phillips), Chakotay (Robert Beltran), Kes (Jennifer Lien), The Doctor (Robert Picardo), and Harry Kim (Garrett Wang) all have their own chapters and what makes them truly precious is Robinson and Wright’s inserts from interviews they conducted with the main cast about their respective characters. The results are pages of smart, methodical reconstructions and examinations of the Voyager crew from Robinson and Wright of the main characters along with heartwarming, and sometimes heartbreaking stories from the people that played them.

Reading Voyager: A Celebration led me to realize that VOY was truly Trek’s “little engine that could”. It went from an improbable idea to a landmark show, and this book proves that while it took a great production crew to make Voyager a strong idea and an outstanding creative team to make its stories unique, it took a ragtag crew of persistent and hardworking people to make Voyager truly great, and a show that deserves to be talked about twenty-five years later.

Star Trek: Voyager: A Celebration is now available on Amazon.