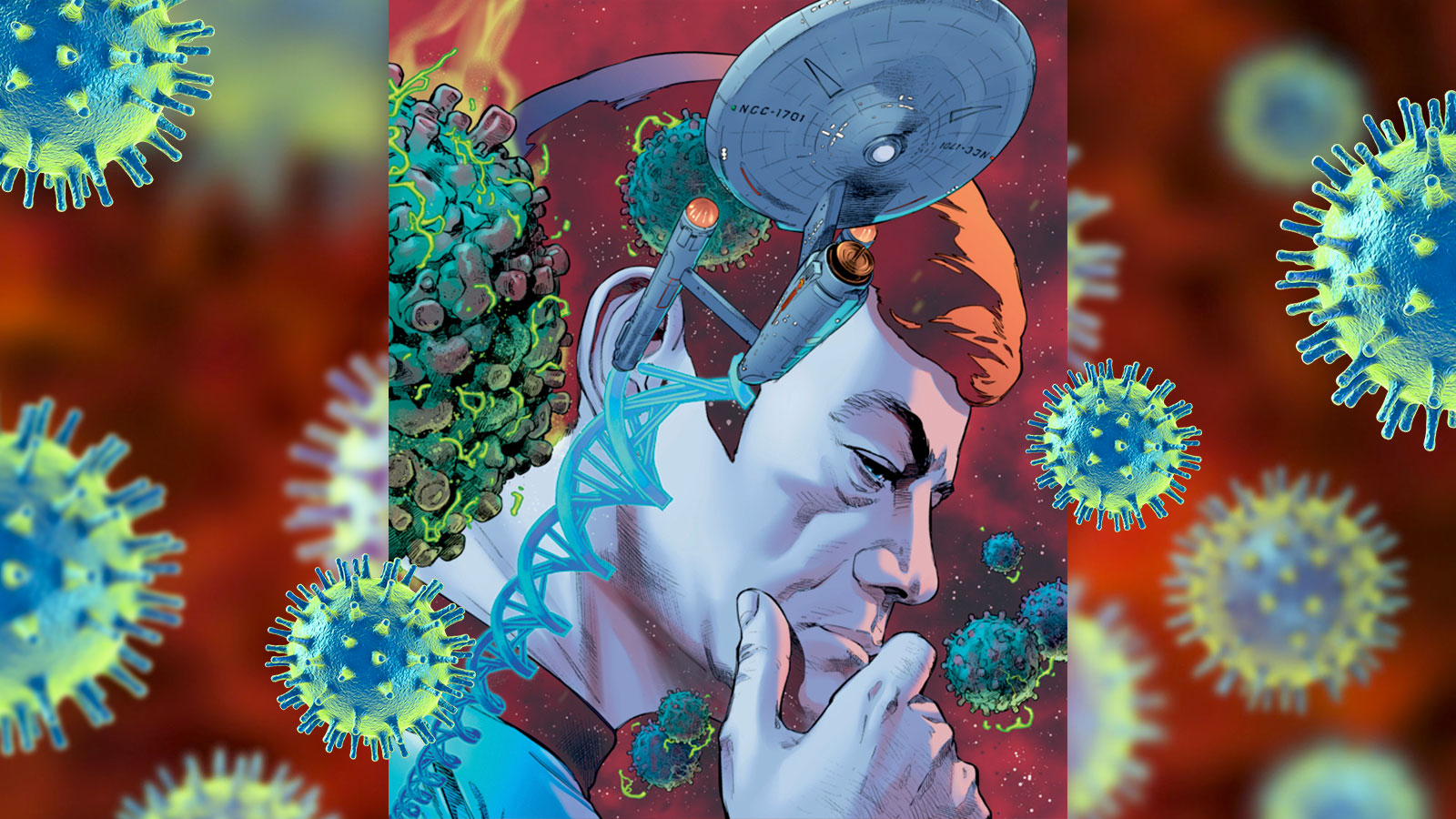 The events of the past year have taken a heavy toll on Kirk and his crew. Thankfully, the end of USS Enterprise’s fifth year is approaching fast as the ship zooms ever closer to Earth. But when Uhura intercepts a distress call from Proxima Centauri requesting help in dealing with a global pandemic, Captain Kirk and his crew realize that home suddenly seems so close, yet so far.

Writer Jim McCann and artist Angel Hernandez deliver terror, hope, and uncertainty in a tale with disturbing parallels to our current reality in the eighteenth issue of Star Trek Year Five.

Some of Star Trek’s best episodes are stories with settings deeply familiar to our world. When the Enterprise meets Lokai and Bele in “Let That Be Your Last Battlefield” or when Benjamin Sisko dreams of the fifties in “Far Beyond The Stars” we’re forced to reflect on the powerful grip of racism in our own society. In “Justice” the absurdity of a judicial system built on absolutes is laid bare. In “The Outcast” the idea of gender identity, a fundamental part of our human experience, is examined. This longstanding storytelling tradition has continued in Trek comics and novels as well. Most recently, in the fourth issue of Star Trek: Year Five, the Enterprise deals with a society caught in civil war due to a twisted and disturbingly simplified view of government.

When COVID-19 enveloped our planet, it seems logical that the round table of creators behind Year Five saw an opportunity to tell a story. There’s an immediate sense of assurance seeing our Trek heroes come face to face with the things that we’re all dealing with but does Year Five #18 go beyond tradition to deliver something more?

The Enterprise’s crew has endured what feels like a lifetime of struggles in the last seventeen issues of Year Five. Perhaps most troubling is the fragile relationship between Dr. McCoy and Spock with the former convinced that Spock is on the edge and about to lose it. The ship’s mood gets worse when Uhura receives an emergency hail. It’s from Alpha Centauri, a planet caught in the storm of a global pandemic, and they need help. The crew springs to action but not before Kirk tells Spock and McCoy to put aside their differences. The three soon transport to the planet, ready to help. As the bodies continue to pile up, on the bridge, Sulu and Chekov attempt to track down what started this pandemic in hopes of stopping it.

Jim McCann, a comic book writer with experience in Marvel and DC Comics, tackles this two-part series. He doesn’t miss a beat in picking up where Jackson Lanzing and Colin Kelly, writers of issue 16, left the crew (issue 17 departs from the Enterprise to explore the origin of Gary Seven) and McCann’s understanding of our crew and where their headspace aligns perfectly with the immediate past and also the past four years of the Enterprise’s voyage. This is a crew that has been through a lot and they’re ready to come home. McCann’s dialog is superb and a double spread in the later pages of the issue has an exchange between Kirk and McCoy which belongs in the hall of fame of Kirk and McCoy banter.

This issue’s penciler Angel Hernandez is a veteran artist and staple of Trek comics for decades now. His most recent work is the continuing stellar miniseries Star Trek: Voyager: Seven’s Reckoning and there’s a big, simple reason why he’s asked to come back to Trek over and over: he’s just that damn good! Hernandez delivers in spades with his pencils and new colorist Fran Gamboa complements them with striking, mesmerizing colors. We see the effects of the pandemic both on the planet and its residents and Hernandez and Gamboa deliver an impressionable and weird aesthetic that lingers long after you turn the page. Letterer Neil Uyetake continues to do a masterful job in the series and the following panels are shown below are just one example of his work.

In the pages of Year Five #18 we witness the first part of a strongly written, beautifully drawn story. McCann and Hernandez illustrate the Enterprise’s struggle to meet the moment by trying to overcome the odds and infighting, resulting in a tale that dares to offer inspiration in a dark world that is all too familiar.