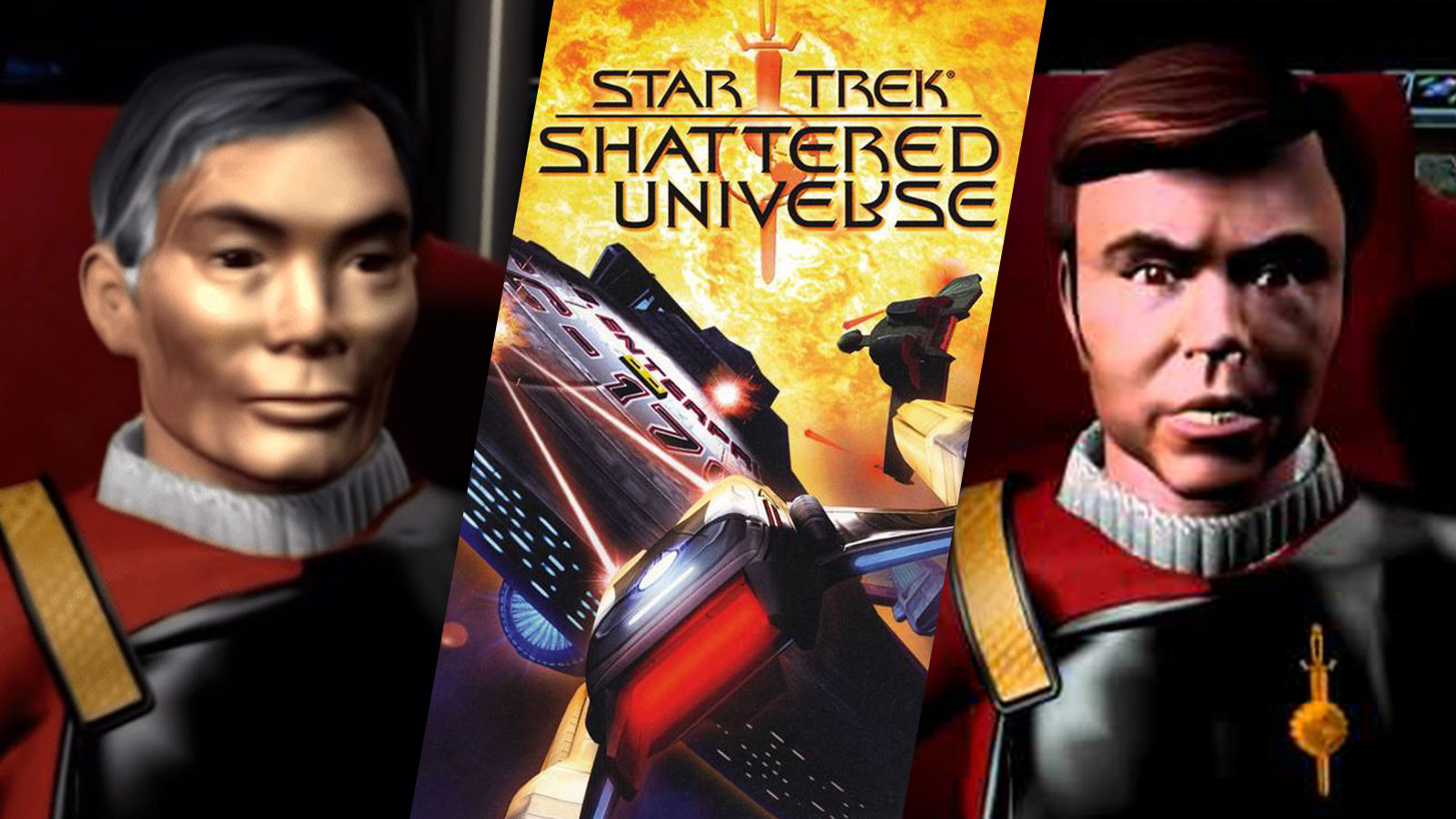 Returning to games you played as a kid is always a win-lose situation. Initially, you find yourself wrapped in that warm blanket of nostalgia as you return to a key part of your childhood. You find yourself thinking, Ah, so that’s what I spent my weekends playing, or Oh yeah, I remember this awesome battle! It’s a great feeling, and I’ve been lucky to do it several times over the last few years, especially with a replay of the excellent Star Trek: Voyager: Elite Force.

With Elite Force, I was able to take a critical look at the game and determine why it maintains its place as one of the best Star Trek games. Unfortunately, a little game I’ve recently revisited called Star Trek: Shattered Universe does not hold up as well as I remembered.

Released in 2004, Shattered Universe was the result of a troubling development. 12-year-old Kyle didn’t know that, nor would I have cared if I did. Originally produced for Interplay Entertainment, a company with a long Star Trek history, Shattered Universe was shelved for a couple of years before Starsphere Interactive finished and released the game with TDK Mediactive as the publisher. Rarely does such troubled development result in a fantastic game. Now, 28-year-old Kyle can totally see the glaring flaws Shattered Universes possesses – but that doesn’t mean I haven’t had a good time replaying this space combat simulator.

And Now We See Through A Glass, Darkly…

The game’s story, in theory, sounds like a great season arc of a Captain Sulu show. Taking place after The Undiscovered Country, Shattered Universe sees Sulu (voiced by George Takai) racing to the rescue of the Enterprise-A, now captained by Chekov (Walter Koenig). The Enterprise, along with the Ranger, is caught in an ion storm, and where there’s an ion storm, there’s a portal to the Mirror Universe. Sulu’s ship switches places with the Mirror Universe Excelsior and is pursued across space by Mirror Chekov.

Players assume the role of a nameless pilot flying a variety of fighters as your parent ship is attacked by a diverse group of enemies. The standout selling point of this game is that several missions are inspired by TOS episodes. Just a few examples of returning TOS elements: the Excelsior confronts the M-5 computer (as seen in “The Ultimate Computer”), leading to an exciting battle against four Constitution-class vessels; You face off against the Planet Killer, as seen in “The Doomsday Machine”; and Balok, as seen in “The Corbomite Maneuver,” even makes an appearance. It’s like the game’s writers had a fever dream about Captain Sulu encountering evil (or eviler) versions of these classic threats. Yes, in theory, this is a great story, but I can’t help but dwell on what could have been.

While the story is intriguing and worth playing through to the end, the writing is the game’s weakest link. Sulu’s captain’s log entries in between missions are passable and do a decent, if not bland job tying the game’s 19 missions together, but it’s the in-mission writing that is noticeably lackluster and cringy. George Takai isn’t given much to work with besides identifying targets for you, which he does use only a handful of super repetitious lines such as “good job, now eliminate the remaining enemy fighters,” or “follow your waypoint to the next objective.” It’s all incredibly generic. Moreover, the game’s missions usually only take 10 or so minutes to complete, leading to sometimes abrupt introductions or conclusions to encounters starring those TOS-era threats.

For example, in one mission Excelsior faces off against the massive First Federation ship Fesarius, but once the mission ends Excelsior is seen simply moving along in space toward its next objective, with barely a conclusion to the encounter. It’s not hard to imagine how the game’s story was cut up, reconstructed, rewritten, or revised over the course of its development hell, making the final product disjointed.

While there are quite a few instances I could point to of lackluster writing, I need to spotlight one mission. Nowhere is the poor writing more noticeable than in the game’s final mission, where both Prime and Mirror Excelsior face off against each other as each tries to get back to its own universe. This mission boils down to fighting seemingly endless waves of fighters for 12 minutes, with your captain saying nothing but counting down the time before they are able to switch back to their own universe. It’s a poor cap to an already hit-or-miss writing effort and takes the bluster out of a potentially interesting finale.

The actual gameplay for Shattered Universe isn’t too bad on its own. Maneuvering your fighter feels snappy and nimble, and there’s enough diversity of craft that prevents flying from getting stale. Where the gameplay suffers, however, is its repetition. Far too often are you tasked with eliminating wave after wave of enemy fighters, with such battles serving no purpose other than inflating the game’s runtime. It would help things if Excelsior was capable of helping you out, but despite being a capital ship that’s technically more powerful than most of its enemies, the ship’s hapless tactical officer can’t seem to line up shots well enough to make a difference in battle. So, you have to tackle dozens of fighters on your own in a decidedly one-dimensional gameplay loop; fly toward an enemy, destroy it, repeat. Sometimes the game will throw an unusual objective your way, like a time trial or collection objective, but these objectives are few and far in between.

Luckily, the game often breaks up this monotony by throwing Mirror Universe capital ships your way, which is a welcome reprieve from pursuing fighters across a game level. Tackling these larger ships, which range from Constitution classes, Akula-class frigates (seen in other non-canonical Star Trek works), the Miranda-class, the classic K’t’inga-class Klingon ships, and a variety of other alien vessels, is fun, if not also repetitive. Players who are particular fans of ships, and I’m certainly one of them, will find it pretty cool maneuvering around these capital ships while trying to destroy them. No matter how many times you take down a capital ship, seeing these ships disintegrate in a blossom of light, with flares of debris spiraling away from them, doesn’t get old.

Another thing that Shattered Universe got right, and where other, more popular flight sims like Ace Combat fail, is allowing you to feel like you are actually hunting down an enemy, instead of aiming at a far-away target visible only thanks to your heads-up display. Being able to get close to your enemies really helps draw you into the game. The relationship between the hunted and hunter is essential to any dogfighting game, and in that respect, Shattered Universe deserves praise. (Interestingly, this is something the aforementioned finale mission does better than any other level.) Take a look at the gif below and you’ll see that the game allows you to get nice and close to enemy craft and take them down. So taken together, Shattered Universe‘s gameplay is a double-edged sword that ultimately makes the game a fun and frustrating affair.

To its credit, Shattered Universe tasks you with getting up close and personal with enemy fighters, leading to exciting dogfights like this:

The game also maintains an appreciable visual design aesthetic. To be honest, part of my enjoyment revisiting this game comes from the fact that I’m (legally) playing via a PlayStation 2 emulator on my computer, meaning I can run the game far better than the ole’ PS2 could back in the day. It also means I can increase the game’s resolution from the meager 480p Sony’s hardware pumped out to the crisp 2160p resolution of my TV. So, the game’s visual presentation is much, much improved, and this mostly works to its benefit. The 3D models for the player’s fighters and the game’s capital ships, like the always-gorgeous Excelsior, actually look surprisingly good in 2021, and the game’s environments are diverse and colorful enough to catch the player’s eye often throughout the game. I found myself taking more than a few screenshots for posterity, something I didn’t expect to do. It’s odd to think the game’s visuals aged the best out of anything the game offers.

What should a remake of Shattered Universe do?

I mentioned before how I lament what this game could have been, and this feeling opens itself neatly to pondering how Shattered Universe could be improved if given the chance.

The most obvious improvement I would make involves the game’s ranking and commendation system, which as it stands now doesn’t do a thing. Awards literally serve no purpose and pose themselves only as participation medals for playing through the game. If the player doesn’t care about “earning” these awards, what’s the point? These days, there’s always some kind of ranking or experience point system that encourages better skill, diverse gameplay, or wild feats of performance. Shattered Universe should have based its ranking system on points earned by the player in the game. Adding such an XP system would go a long way toward making the more repetitive aspects of Shattered Universe easier to deal with.

Speaking of repetition, the game would benefit from cutting out a few missions, notable the three that tasks you with flying around a game level collecting resources for the Excelsior while fighting off waves of fighters. One mission like this is fine, but you do it three times!

Another major improvement deals with the player’s character. We know literally nothing about who is in the cockpit of the fighters we use throughout the game, and adding such characterization would help the game feel more Star Trek-y. Let us pick our character’s race and customize our appearance, and then let us customize our fighter’s aesthetic to some extent. At the end of every mission, we could then see a progress screen that shows our character and whatever experience or accolades we earned. In that way, we would be more invested in Excelsior’s journey through the Mirror Universe.

In the same way, the Excelsior proves to be a useless combatant in engagements, so are the friendly fighters that “fight” with you – that is to say, they fly around and just look like are doing something. Having squad commands that would allow you to order those fighters to fight or defend you and the Excelsior would be a fantastic addition. Allowing us to choose which type of fighter our allies fly would also be a great customization feature.

With both its flaws and strengths taken together, Shattered Universe is simply a passable game. The foundation for an exciting, well-told story and engaging gameplay is there, but it just needed more time and finesse than it was afforded. Despite my frustration at its repetitive gameplay or disjointed story, I was happy to replay this staple of my childhood, and I would recommend a playthrough if anybody else has the opportunity to play via emulation. But my nostalgia for this game also stems from what it represents: a time when getting Star Trek games were the norm. What are the chances today that we would get a single-player game focused on one or two major Star Trek characters? Shattered Universe brings me back to the glory days of Star Trek video gaming, and that’s as good a reason as any for enjoying this game so many years later.

In this article:Star Trek: The Original Series, Video Games