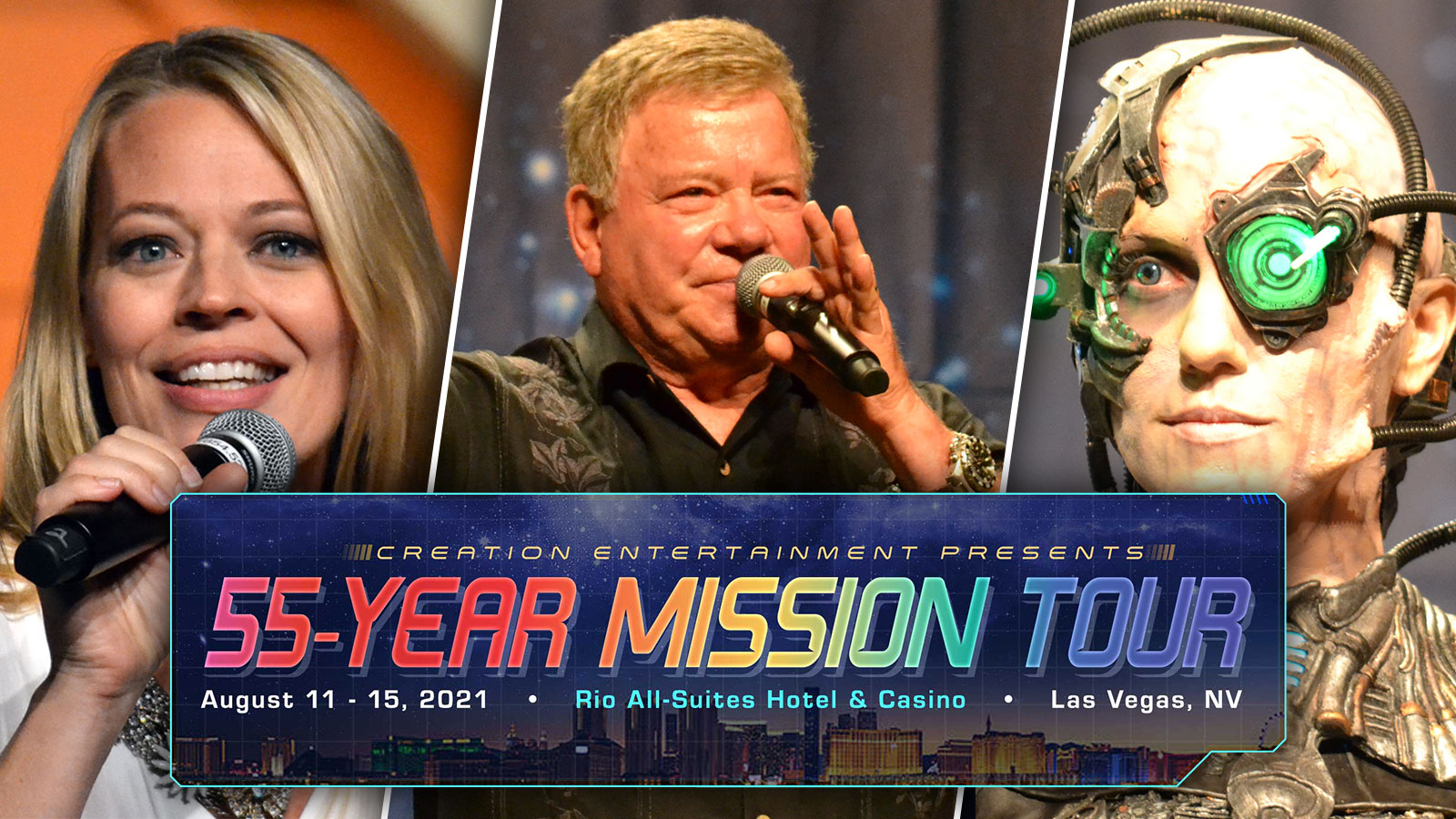 Creation Entertainment’s annual Star Trek convention has a new name this year but will bring many familiar faces from nearly every iteration of the Star Trek franchise to the Las Vegas Rio with the 55-Year Mission Tour in August.

Following the cancellation of last year’s Star Trek Las Vegas convention due to the global pandemic, Creation is set to return to Las Vegas with headliners like William Shatner, George Takei, Nichelle Nichols, Walter Koenig, Jeri Ryan, and Kelsey Grammar during the five-day event, which kicks off on Wednesday, August 11 and runs through Sunday, August 15.

The 55-Year Mission in Las Vegas will feature:

The Saturday Night Gala Celebration will return with the Nevada Pops Orchestra.  This special night features Maestro Richard McGee and a 45-piece orchestra who will honor Gene Roddenberry’s 100th birthday and his legacy and impact. Special quest conductors will be Dennis McCarthy (Grammy Award-winning composer) and Jeff Russo (Emmy Award-winning composer known for his score of Star Trek: Discovery). Anthony Rapp (Star Trek: Discovery) and Isa Briones (Star Trek: Picard) will perform with the orchestra. The concert will take place Saturday, August 14 at 9:30 p.m. and will require a separate ticket of $75 is required for general admission.

For cosplayers, Saturday is the day! The costume competition with celebrity judges, special on-stage costume panels, the annual costume parade throughout the convention, and a number of cosplayer meet-ups are all scheduled. Garak’s Tailor and Repair will be returning to handle any emergency costume repairs for free throughout the weekend.

For those who are fully vaccinated, you must bring proof of vaccination, along with your valid ID, to receive a special-colored wristband, which will allow you entry for the entire convention. You can bring the physical card, OR a printed or digital copy of the card.

For those who are not vaccinated or partially vaccinated, we require a negative COVID-19 test result, which should be taken within 72 hours (3 days) of attending the convention. For those attending Tuesday-Thursday with a negative test, you will receive a special-colored wristband that will give you access through Thursday.

By Friday, an additional COVID test will be needed for those who will be attending Friday and/or through Sunday. There are Rapid Test options available in the Las Vegas area. Visit the website and use the zip code 89103 for the search. We may have a small number of tests available on-site at that time on a first-come, first-serve basis, but to ensure access to the convention, please visit the above website to make your appointment and get your Rapid results. NOTE: If you receive a positive COVID-19 test, you will be eligible for a refund for the days you will not be able to attend, which will be given after the convention ends.

Per the mandates set by the state of Nevada and the city of Las Vegas*, effective July 30, 2021, mask-wearing is mandatory indoors for all attendees, regardless of vaccination status.

Sanitizer stations will be placed throughout the convention area for public use.

If you are feeling ill, please DO NOT attend.

UPDATE 2: Rainn Wilson has been added as a headlining guest.

Members of the TrekNews.net staff will be on the ground in Las Vegas bringing you all the late-breaking news coming out of the convention, along with live-tweeting the major panels and sharing photos throughout the weekend on Twitter and Facebook.