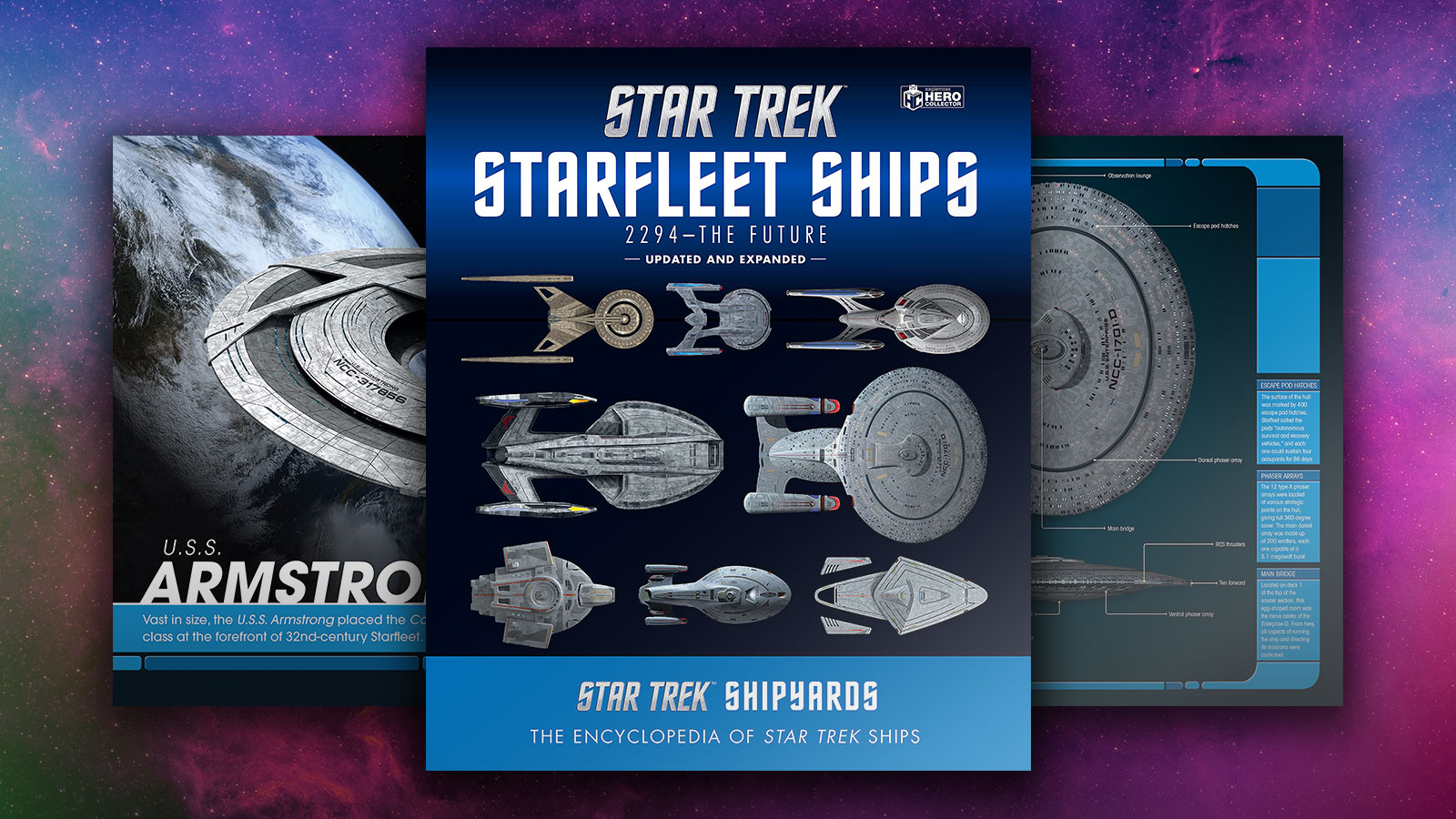 In the Star Trek universe, the ships of Starfleet are a class apart (no pun intended) from the rest of the ships we encounter. The Starship Enterprise is without a doubt not just the most recognizable ship in the franchise but an argument can be made that it is quite possibly the most recognizable ship in all of science fiction. All other Starfleet ships bow at her altar in terms of design and functionality. Great care has gone into making sure that all Starfleet ships including the Enterprise evolve with time and technology while still retaining the distinct look that makes them worthy of carrying the sacred delta insignia.

That was the biggest takeaway for me after the first read-through of Star Trek Shipyards: Starfleet Ships: 2294–The Future. The foreword of this Updated & Expanded second edition, which includes seventy new pages that cover Starfleet vessels from the third season of Star Trek: Discovery and the first season one of Star Trek: Picard, makes a mention about the first edition being Eaglemoss’ most popular entry in their Shipyards series of books and deservedly so. There are ships of all shapes, sizes, color patterns, characteristics in Star Trek but the ones we spend the most time with are Starfleet ships. Much like they are our tether as we traverse through strange new worlds, the Starfleet Shipyards book is the perfect tether for us as we dive deeper into the world of Trek spaceships.

Shipyards: Starfleet Ships consists of five main sections: Small Transports, Fighters, Multi-Mission Explorers (the biggest section), The Future & 32nd Century. The ships covered in this edition only include the Prime Universe which is a little disappointing to me as a Trekkie whose fandom began with Star Trek ’09. Most ships contain an overview that spans a couple of pages along with plan views of the ship along with stills of the ship’s exterior and interior taken directly from each series. The overview begins with a breathtaking portrait of the ship, a result of high-quality CG model work from the Hero Collector/Eaglemoss team. To the surprise of no one who owns an Eaglemoss starship model or has read any of their previous book releases, the quality of both new artwork and stills from the shows is top-notch. If books like this are all we get until Deep Space Nine and Voyager hopefully get their high-definition remasters, I’m not complaining.

The words in Shipyards: Starfleet Ships are the supporting characters. That doesn’t deter editor Ben Robinson and his team from providing as many words as can possibly be fit on the pages without crowding the art. The overview covers in detail the origin story of the ship, features that set it apart, and many of its remarkable adventures in the show. Of course for a ship like the Enterprise, it would most likely take a full book to cover everything so there is a cliff-notes like approach to a subject like that but when a ship like the USS Nog is showcased you feel like you know everything about the ship by the time you get to the last word on it. Factoring in the comprehensiveness of the overview, descriptions of important sections in the plan views pages, and the Data Feed section, not much, if any, is left off the page in most cases. It is an encyclopedia in the true sense of the word.

At a whopping 312 pages from cover to cover, Shipyards: Starfleet Ships is not a mere book, it is a visual experience. As a reference source, it is harder to think of a better book that would qualify as a definitive guide to Starfleet’s ships. A cup of Raktajino, one of Jerry Goldsmith’s Star Trek scores playing in the background, and a book like Shipyards: Starfleet Ships is all you need for an engaging, nourishing reading experience.