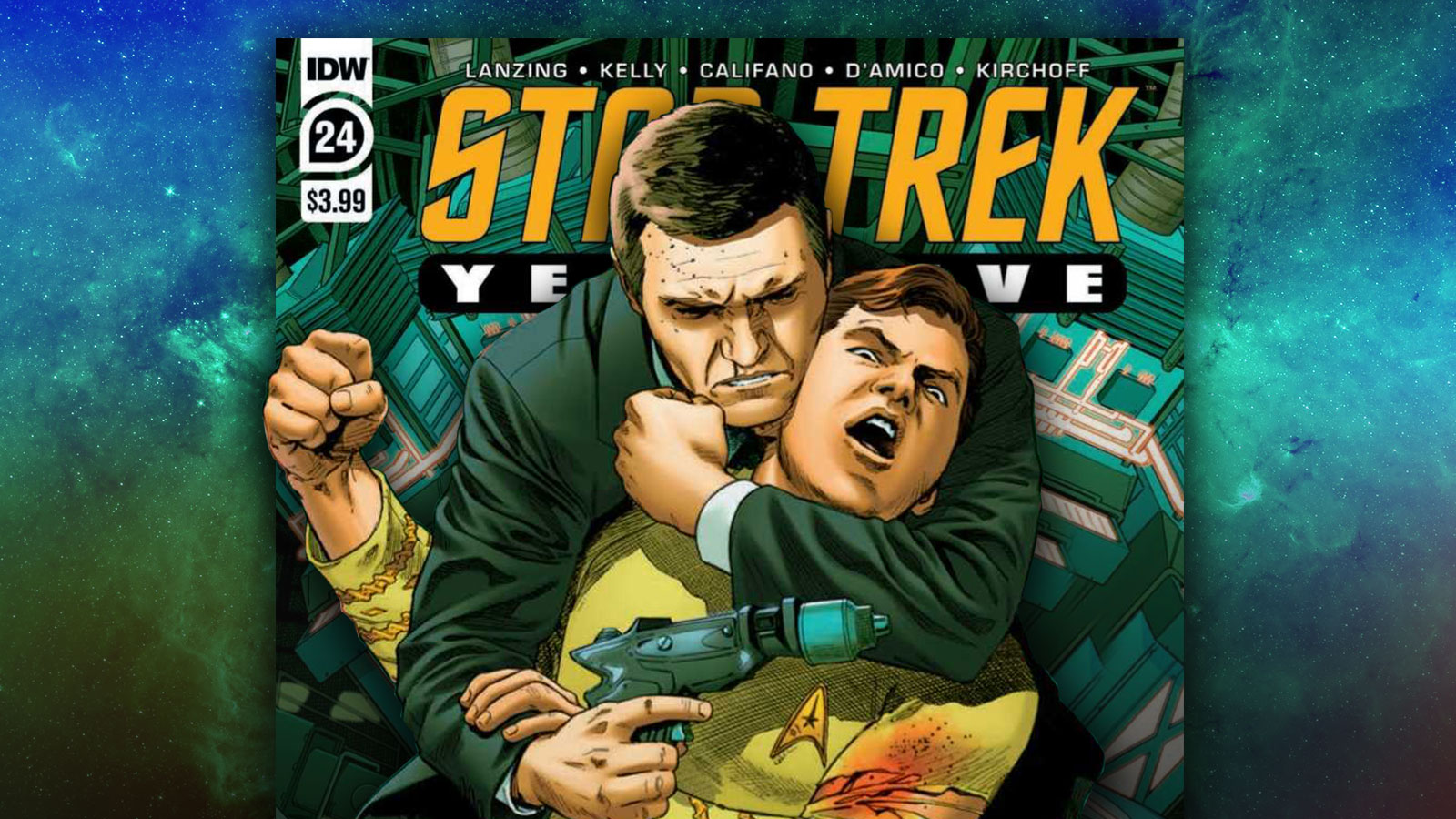 The Tholians have trapped the Federation in their web. They have rendered the USS Enterprise unresponsive. Kirk, forced by Gary Seven to de-board the Enterprise, is pushed into a cat-and-mouse chase that takes them both all the way back from the end of Star Trek: Year Five to before the beginning of Day One.

We are assembled here today to express our appreciation for the honored Year Five comic book series. And yet it should be noted, in the midst of our sorrow for this series ending, this issue takes place in the shadow of a new beginning for Star Trek comics, the sunrise of a new world; a world whose possibilities our beloved series spent over three years expanding and redefining. Of the series, I can only say this: Of all the Star Trek comics I have encountered in my travels, Year Five was the most…[voice breaks] profound.

Gary Seven who has been haunting the Enterprise constantly in their fifth year has returned with a seemingly unbeatable ally: the Tholians. He has seen the future and it’s full of death and destruction. In order to stop that from happening he and the Tholians plan to place the entire galaxy in a state of endless stasis. The USS Enterprise that returned home just days ago after its year-long voyage has been despatched again to stop them from carrying out this terrifying vision.

It’s quickly overpowered by the Tholians, however, and left unable to move. Kirk, knowing his real fight is with Gary Seven, relinquishes command of the Enterprise and transports to Gary Seven’s location, leaving the fate of the future with Spock, Bright Eyes (the Tholian child Enterprise rescued at the beginning of the series), and the rest of the crew. Seven is found and moments away from being captured but far from ready to give up he slips away in time to confront and defeat his persistent adversary during a most unsuspecting moment: a young Captain Kirk’s first day on the Enterprise.

Writers Jackson Lanzing and Collin Kelly have led a round-table of writers and artists valiantly during the grand creative experiment of Year Five. After overseeing a series that has brought to life adventures truly worthy of the crew, they took over the writing duties for these last three issues. They do a great job of establishing the stakes and tension for the series finale in issues 22 and 23 but issue 24 is their true finest hour. A heroic moment for Bright Eyes, a masterful monologue for Spock, an unexpected yet welcomed ending for the Kirk-Seven rivalry… Lanzing and Kelly leave it all on the table in issue 24.

It’s a finale that, intentionally or unintentionally, mirrors one of the best series finales in the Star Trek franchise: The Next Generation’s All Good Things. All Good Things centered its time-spanning, universe-shattering finale in between the brave yet merely human Picard and the omnipotent Q. In a similar fashion, in a galaxy-sized whirlpool of chaos involving the Tholians, humans, aliens, and the Enterprise, Lanzing, and Kelly keep the heart of this tale between Kirk and Gary Seven. It’s a conflict that holds in it the fate of the universe and Lanzing, Kelly not only understands the weight of that story, but they also give it the time and space it needs to unravel and end with true Star Trek spirit.

Silvia Califano delivers another excellent issue with her pencils. Her artwork is magical because it is able to consistently bring to life The Original Series characters we know and love in every issue she touches. With Charlie Kirchoff‘s colors and Elisabetta D’Amico‘s inks, they create a mix of shapes, lines, and shades that manages to capture the look and feel of The Original Series with stunning detail. I sincerely hope Califano sticks around and continues to draw Trek comics for a long, long time.

With Star Trek: Year Five issue 24 Lanzing, Kelly and Califano provide a stellar conclusion and cap off a series of eventful adventures that have already tested our heroes to their fullest abilities. The issue is high on action and impactful with emotion. All good comics, and one even great ones like Year Five, must come to an end.