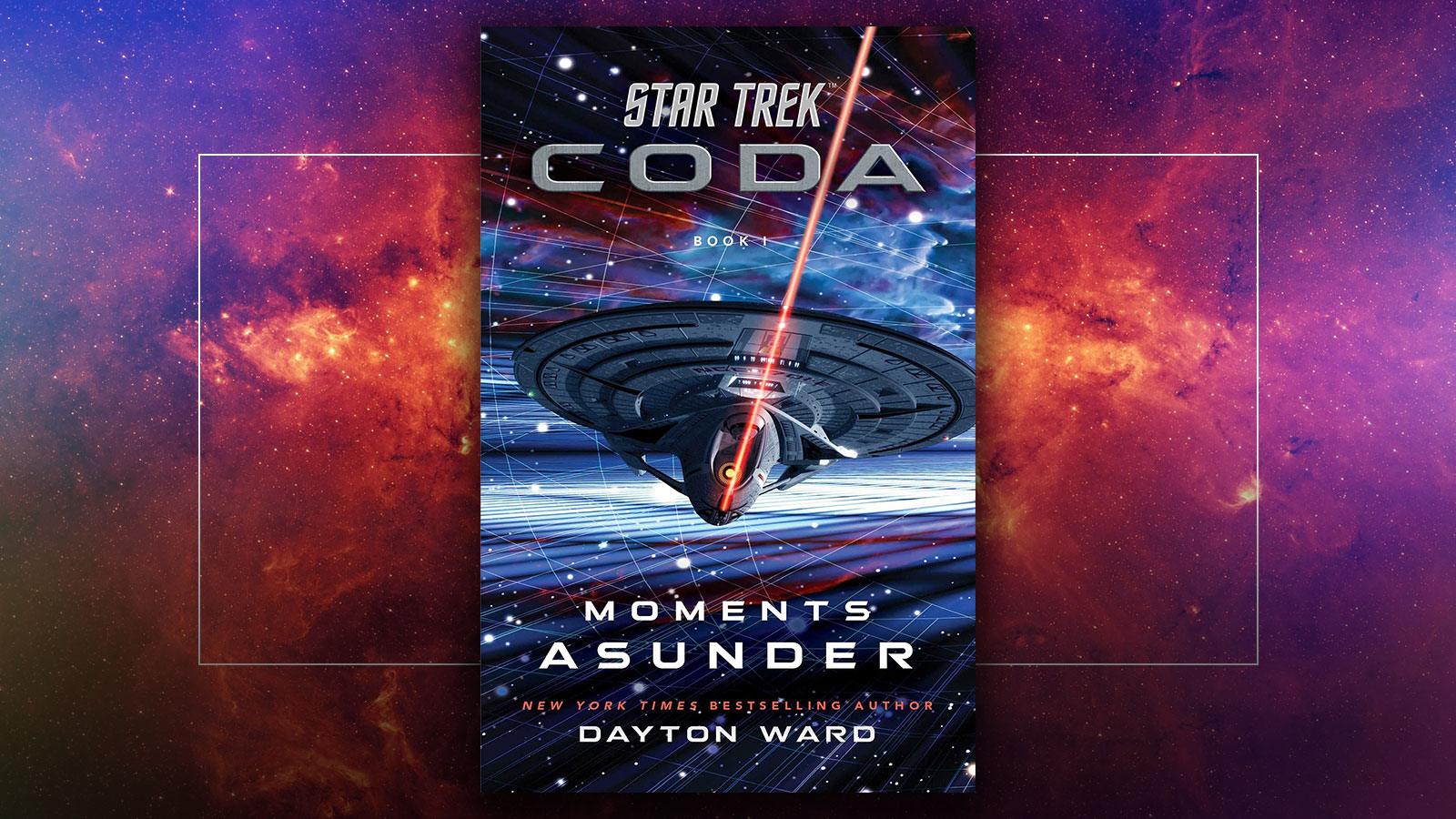 If you picture Moments Asunder and by extension the Star Trek: Coda trilogy, to be for the Star Trek literary universe (sometimes called the “lit-verse” or “novel-verse”) what Avengers: Endgame was for the Marvel Cinematic Universe, it’s easy to picture how important and game-changing this book is. But that isn’t even the most appropriate comparison, because Star Trek: Coda is doing something Endgame didn’t: sending one-half of its franchise’s continuity out with a bang.

In fact, you don’t have to let us tell you that. Author Dayton Ward lays out the trilogy’s objective in the afterword, and it’s a mighty one at that: Star Trek: Coda is a way for Star Trek to transition from the non-canon novel-verse to whatever canon literary future is in store for the franchise. It’s tearing down the canon of the lit-verse in a respectful but decisive way.

Ward uses the Star Wars franchise to help illustrate this weighty goal. When Disney bought that franchise in 2012, they declared the Expanded Universe (EU) – all the books, games, comics, and other non-film or TV material – non-canonical so that they could continue TV and film projects unencumbered by the enormous amount of EU canon. This didn’t sit well with many fans, including Ward. In 2018 after learning about the then-upcoming Star Trek: Picard, Ward and fellow Star Trek authors received the go-ahead from the powers-that-be to send the Star Trek novel-verse out with the bang. As Ward relates, they were told to “swing for the fences.” Fast forward now to Moments Asunder. (We actually recommend you read this book’s afterward first, as Ward goes to great length to help the reader understand why Coda exists. Or check out a blog post on Ward’s website.)

“When it became apparent that new Star Trek television projects would cause a conflict with the existing Star Trek ‘literary continuity’… the good folks at ViacomCBS in charge of approving such things very much wanted to avoid a replay of the Star Wars situation. They welcomed and in fact championed our desire to do what we could to transition to the ‘new paradigm,’ as it were. So here we are.”

It’s important to understand what you’re getting yourself into when you pick up this book. While not considered canon, the Star Trek literary universe is a massive body of work that covers many crews from many starships. Expanding on what we’ve seen on TV, mainstay Star Trek authors such as Dayton Ward, David Mack, and James Swallow, among many others, have charted stories since 2005 for not only our hero crews from the shows but other secondary characters. For example, did you know Taurik, the Vulcan engineer played by Alexander Enberg in TNG‘s “Lower Decks,” became a prominent part of the Enterprise-E‘s crew in the lit-verse? In Moments Asunder, the first part of the Coda trilogy, we see these crews start to come together. Star Trek characters… assemble!

How is the inaugural book in this much-hyped trilogy? Well, we blew through it in three days – not because we were short on time, but because it’s hard to put down. While this book focuses mainly on Captain Picard and his perspective on the temporal threat if you’ve invested yourself in other Star Trek novels and are therefore familiar with the crews of the U.S.S. Titan, U.S.S. Aveline, the post-Nemesis Enterprise-E, post-finale Deep Space Nine, and post-finale Voyager, then buckle up: you’re going to find a lot to enjoy here. And besides knowing these lit-verse books, let’s just say you should watch TNG‘s “Time’s Arrow” before reading this book.

Now, that’s not to say newbies will not enjoy this novel, but just imagine you go to the movie theater to see your first MCU movie and it’s Avengers: Endgame. You’re not going to feel super-invested in these characters, but you’re probably going to enjoy the movie anyway, right? That’s the feeling we get from this book. Thankfully, even if you’ve read a select few novel-verse entries, such as the excellent Star Trek: Destiny trilogy, Hearts and Minds, a few Titan novels, and the Star Trek: Avatar duology, then you’ll be well-primed for this book. You’d know characters such as the Enterprise-E’s T’Ryssa Chen and Taurik, or the Aveline’s Ezri Dax (also from DS9, of course) and her first officer Sam Bowers, are pretty fleshed-out characters in their own right by the time they appear in Moments Asunder.

One last note on reader preparation before reading this book: Newies to post-2005 Star Trek literature will be happy to know that Ward tries to ease the burden of learning about the novel-verse with a thorough timeline in the book’s beginning. We can say that after finishing reading Moments Asunder, the timeline does a good enough job acclimating readers to certain major events – although just know that we don’t think this timeline replaces actually reading lit-verse books.

Dayton Ward uses our connection to lit-verse characters to help solidify the threat these people are facing. Without spoiling who, just know that not everyone survives the events of this book, including a couple of characters we really didn’t think would perish. We hope that the characters who do die within these pages actually stay dead because you never know when it comes to time travel tomfoolery. As it stands, Moments Asunder does a good job framing how dangerous the temporal threat is.

Because it’s part one of a trilogy, Moments Asunder spends a lot of time building up the foe and the situation our heroes face. Without giving away too many spoilers, just know that there’s plenty of time travel, alternate realities, intense ship- and personnel-based combat, and a story that challenges the reader’s comprehension of what they think they know about time travel. Although we do think Ward goes a little heavy at the end of the book when the characters yadda-yadda their way through describing the nature of the enormous temporal threat. In the end, it’s hard to judge the plot’s pacing without knowing what its sequels are like, but if a bit of dialogue-heavy temporal technobabble is the only substantial critique we’re leveling against the book, that’s probably a good sign.

We do have one minor critique about Moments Asunder. One of the things we liked about the Destiny trilogy was that, because it included many people across various starships, there was a dramatis personae readers could reference. No such list exists in this book, which would have been helpful even for those familiar with other books.

All things considered, the Star Trek: Coda trilogy is aiming to be a massive event for the Star Trek literary universe. It’s the combined attempt of Dayton Ward, James Swallow, and David Mack to cap a fitting end to more than a decade of Star Trek storytelling. Moments Asunder is the first step in that journey, and it’s a great first step. With a deadly threat facing not just themselves, but all universes, we’re foaming at the mouth to learn how, or if, Captain Picard and his allies resolve this situation, and, more importantly, what the Star Trek novel-verse looks like after this trilogy.

Star Trek: Coda: Moments Asunder is now available on Amazon. The next book in the trilogy, The Ashes of Tomorrow, will be available on October 26.