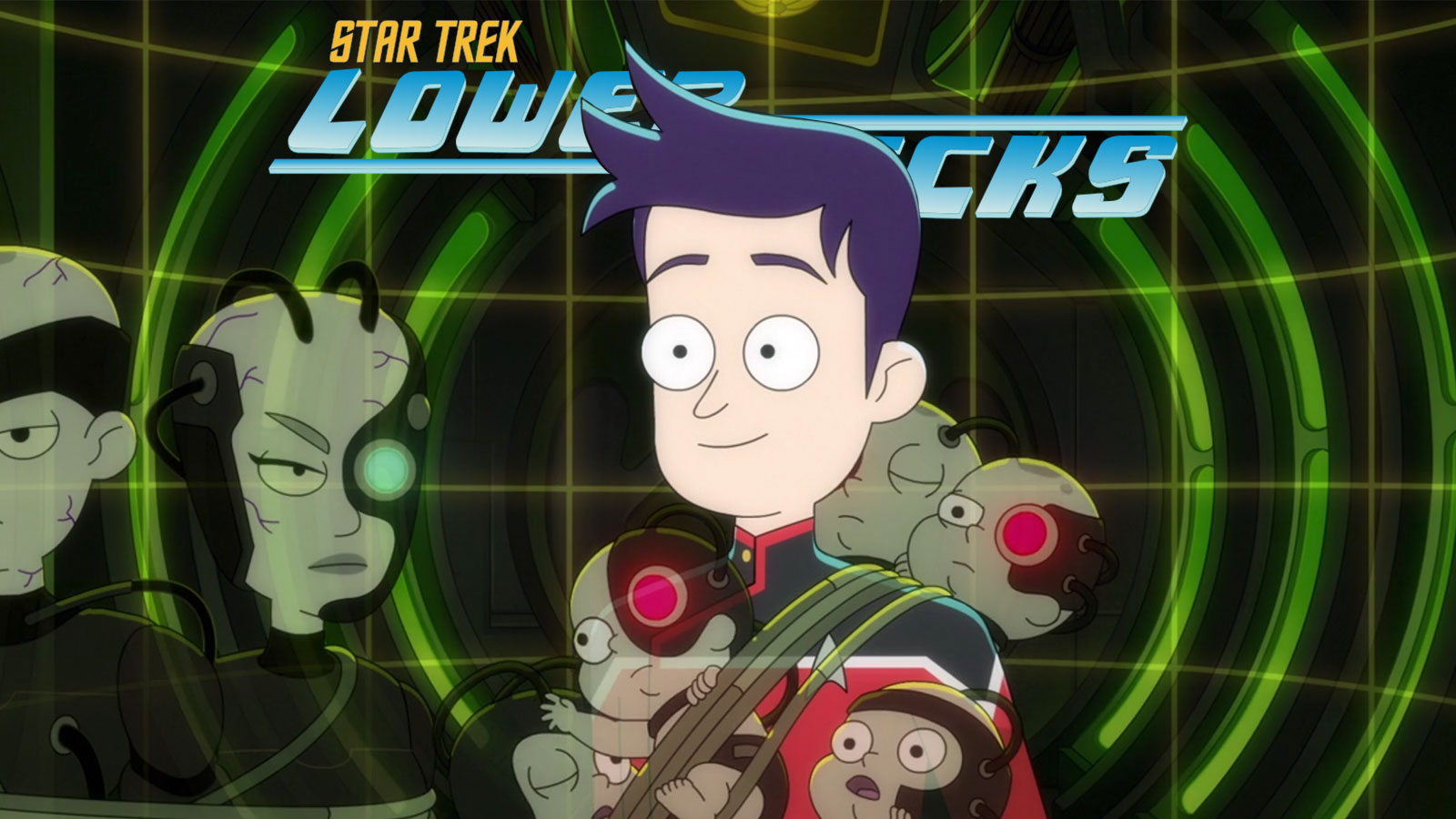 “I, Excretus” reminds us of the season one episode “Crisis Point” in that both episodes take great care to parody specific Star Trek situations. Whereas that season one episode made fun of certain Star Trek movie tropes, “I, Excretus” turns its comic sights on survival situations seen in a variety of Star Trek productions. Considering we thought “Crisis Point” was the best episode of season one, you could guess we think quite highly of “I, Excretus.” Indeed, it’s the best episode of the season so far.

After leaving our Lower Deckers out in space to respond to a distress call, an action that Mariner certainly takes issue with, Captain Freeman (Dawnn Lewis) and her crew are subject to performance drills by a Starfleet drill instructor, Shari Yn Yem (Lennon Parham). But there’s a twist: Lower Deckers perform senior officer-level tasks, while senior officers perform menial tasks. Drills take place in nifty holo-pods, which report the score of each crew member for all to see, and every drill is something other Starfleet crews have experienced. That means… you guessed it… REFERENCES.

As any Star Trek fan would immediately pick up on, these drills are all taken from other Star Trek media. Let’s run through the partial list Shari Yn Yem presents at the crew’s orientation:

After seeing this list, we knew we were in for a good time.

The reason why this episode works so well is that it’s edited for maximum laughs. As the episode flips back and forth between the Lower Deckers’ command-level assignments, we see a variety of laugh-out-loud situations. Mariner’s Mirror Universe encounter doesn’t go her way, neither does Tendi’s task of navigating a Klingon’s request for an honorable death (a la Worf in “Ethics”). Rutherford, likewise, doesn’t perform well in the “For the Good of the Many” scenario, which sees the ensign attempt to save the ship in the same way Spock did in The Wrath of Khan. Boimler, meanwhile, becomes obsessive in trying to perfect his Borg escape scenario, and ends up staying in the holo-pod well after everybody else. These failures lead the ensigns to admit that perhaps the bridge officers actually do have it pretty tough when it comes to their life-and-death responsibilities.

Meanwhile, the senior officers come to appreciate how menial their tasks as Lower Deckers are, such as stacking crates during a Jem’Hadar attack. After failing their respective tasks, our ensigns (sans Boimler) and the bridge crew have to pass a final test: working together to “steal” the Cerritos from Spacedock, a la The Search for Spock. During the exercise, and perhaps to no one’s surprise, Mariner and Freeman get into a fight about Mariner not being able to tackle one of the drills, and the crew ends up failing the mission.

One of the unintended results of these simulations was that the Lower Deckers and senior staff ultimately end up bonding thanks to their newfound respect for the others’ jobs. Thinking that was the goal of the drills all along, Mariner and Freeman assert as such to Shari Yn Yem, but… twist! The drills were designed by the instructor to be impossible because she needed to reassert to Starfleet Command the value of her drills. Because all the scenarios failed, all seems lost for the Cerritos… but don’t forget Boimler! He’s been plugging away at trying to get a perfect score in the Borg encounter – even going so far as to beat the Borg Queen at chess and teaching her empathy. But alas, the poor ensign must remain in the holo-pod while Freeman and Mariner figure out a way to prevent Shari Yn Yem from submitting the Cerritos‘ failing scores.

“None of you are the best. You’re on a California-class ship. Most of the Federation doesn’t even know you exist.”

“The smaller the ship, the tougher the crew!”Shari Yn Yem and Captain Freeman

In their attempt to defeat the instructor, Freeman asserts how important the Cerritos is despite Yem’s assertion that California-class vessels are low on the Starfleet totem pole for a reason: they just aren’t important. Freeman devises a great plan to make the instructor realize how experienced and tough her crew really is. She directs Tendi, still at the helm controls thanks to the previous drill, to set a course for something dangerous. As Freeman and her crew deal with these supposedly dangerous situations, Yem gets scared enough to promise not to submit her report about the Cerritos‘ failing conditions to Starfleet Command.

For her part, Captain Freeman assumes leadership of her crew in a way we really haven’t seen before. It’s inspiring to see her coordinate the ensigns on the bridge, as it illustrates that Lower Deckers are indeed vital members of a ship and that just like senior officers they help keep the ship running no matter what. It’s just a glimpse though, as once the conflict is over, Lower Deckers return to their menial duties – albeit with a bit more respect from the senior officers.

There’s one last notable bit we want to praise from this episode: the fantastic use of guest star Alice Krige, who returns as the Borg Queen in Boimler’s holo-pod simulation. Her distressingly sexy voice is totally reminiscent of her appearance in Star Trek: First Contact and even bits of her dialogue harken back to that fantastic movie. Her appearance here is a great example of a cameo done right; it’s not shoehorned into the episode in the way Robert Duncan McNeil was in “We’ll Always Have Tom Paris,” nor is it as explosive and attention-grabbing as Jonathan Frakes and Marina Sirtis in the season one finale.

We’ve said before that season two is proving Lower Decks is confident in itself in a way we rarely saw in season one. “I, Excretus” shows what happens when Lower Decks possesses the utmost confidence in itself. The editing is tight, the references just keep on coming, and at the heart of it all is a story of solidarity, teamwork, and recognizing the value in others. Taken together, this episode is the best season two has to offer thus far, and will likely end up being a standout episode in the entire show’s run.