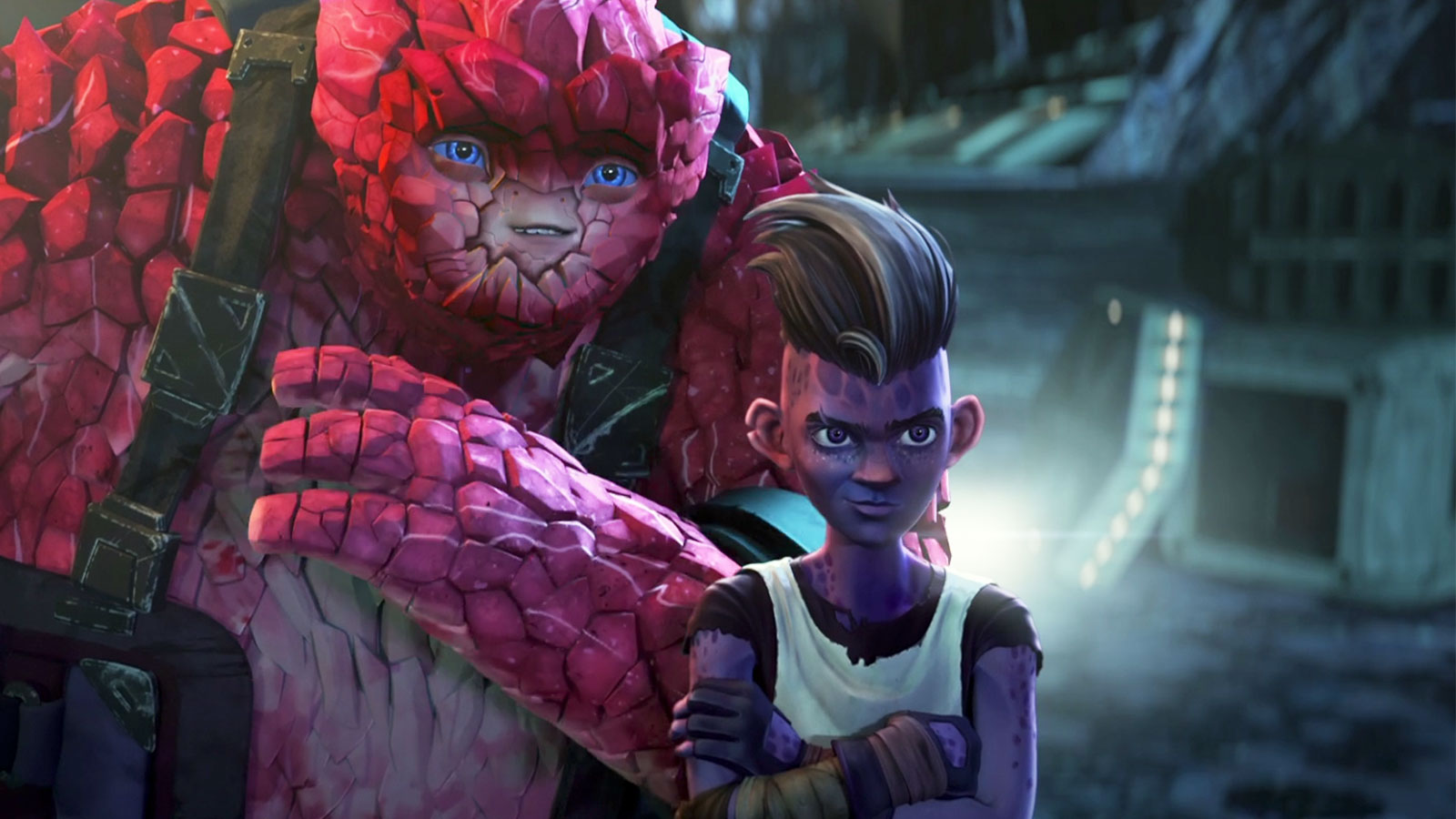 Star Trek: Prodigy, the brainchild of Kevin and Dan Hageman (Trollhunters), claims to be a kids show – indeed, the first Star Trek kids program since Star Trek: The Animated Series in the 1970s. But Prodigy feels like it’s on track to become something much more than “just a kids show.” Indeed, it only rarely feels like a kids’ show. The 45-minute pilot “Lost & Found” boasts striking visuals, a charming cast of diverse characters, and most importantly, a heart that will surely strike home with children and adults.

The most alluring thing about this show is the visuals. Paramount+ clearly hasn’t been shy to show off bits and pieces of this show’s gorgeous animation, such as the previously released opening sequence back in August, but seeing full episodes of Prodigy is a feast for the eyes. As the first computer-generated Star Trek animated show, Prodigy certainly makes a great first impression. Massive kudos go to this show’s art team. The animation style is obviously cartoonish but not without roots in realism. Environments, such as the prison/dig site where the show begins, are packed with detail, and a cinematic shine seems to gloss over the show’s presentation. It’s absolutely wonderful to watch.

We also noticed that this show seems to employ a technique similar to Into the Spider-verse, where it seems like certain characters or movements are at a lower framerate than the rest of the show. In that movie, the artistic reasoning behind this technique was ostensible to show how the main character had yet to fulfill his potential, and we can totally see similar reasoning behind Prodigy‘s implementation.

Fancy visuals aside, how does the story hold up? Well, “Lost & Found” wastes no time in introducing the main characters. First, there’s Dal R’El (Brett Gray), a member of an unknown species who yearns to leave Tars Lamora, a prison that employs orphans to unwittingly search for the Protostar. These orphans are delivered to the prison’s warden via the Kazon, the well-known enemy seen in Star Trek: Voyager.

Dal yearns to escape, but one of his escape attempts coincidentally coincides with the arrival of Zero, a shadowy figure who the prison’s warden, The Diviner (John Noble), and his daughter, Gwyn (Ella Purnell), are trying to capture. Gwyn forces Dal to find Zero, and Dal eventually finds himself in the deep mines of the prison, paired with Rok-Tahk (Rylee Alazraqui), a massive alien who speaks in grunts and ferocious yells. When Dal accidentally destroys part of the mine’s wall, the pair find themselves face-to-face with a marvelous sight: the U.S.S. Protostar. And onboard the ship, the pair encounter Fugitive Zero (Angus Imrie), the mysterious, non-corporeal, and telepathic Medusan that The Diviner is after.

We were happy to see that the Hageman brothers know the importance of a good ship introduction. Ever since Star Trek: The Motion Picture, it’s been standard practice to give the hero ship a good look-see – you know, where the camera lingers on the model to give the viewer a decent look at what is essentially another character on the show. In Prodigy, the plot pumps the brakes long enough to give the Protostar a great introduction. It’s a sleek ship, only maintaining the bare minimum standard Federation design language, such as clear warp nacelles placement and forward-swept saucer. Otherwise, this is quite the novel design, and we were happy to absorb the vessel’s fluid, angular nature in a way it deserves.

For our small group of heroes, the question becomes how to escape Tars Lamora with the Protostar. Dal and Rok-Tahk enlist the engineering expertise of fellow prison inmate Jankom Pog (Jason Mantzoukas), and Rok-Tahk brings aboard Murf (Dee Bradley Baker), the slug-like creature that is already proving to be a fan-favorite character. But escaping isn’t that easy, as Dal gets captured by Drednok (Jimmi Simpson), the devilish General Grievous-esque right-hand man of The Diviner. Drednok orders Dal to work on the prison’s surface, a death sentence if not for the fact that Dal is allowed to escape so he could lead the villains back to the Protostar. A stand-off at the Protostar between the young crew, Drednok, and his robot henchmen, and Gwyn turn into the first flight of the Protostar, and boy is this a glorious sequence.

It’s during the Protostar‘s escape that our crew shows their potential in working together. Between Rok-Tahk clearing the way via the “pew-pew button,” Zero navigating the ship despite never having done so before, and Dal facing off against Drednok on the ship’s hull as the shields come online, it’s an entertaining first look at this nascent crew. Of course, they don’t work perfectly together yet, and a certain helpful hologram is there to offer her assistance: Captain Janeway (Kate Mulgrew). We’ll have to wait until next week to learn more about why Janeway is represented on the Protostar, and how she can help our heroes.

Ultimately, we were pleasantly surprised by how much we enjoyed “Lost & Found.” At its heart is a tale about how children who come from a myriad of backgrounds can join together for a common goal; that’s a great children’s lesson if we ever heard one. But Prodigy is more than that. It’s a visually stunning first entry in the world of Star Trek 3D animation, with production values that are in line with Paramount+’s flagship Star Trek shows. We are excited for what the Hageman brothers seem to have created for Star Trek fans, and we’re equally excited for the young fans it will bring into the fandom.