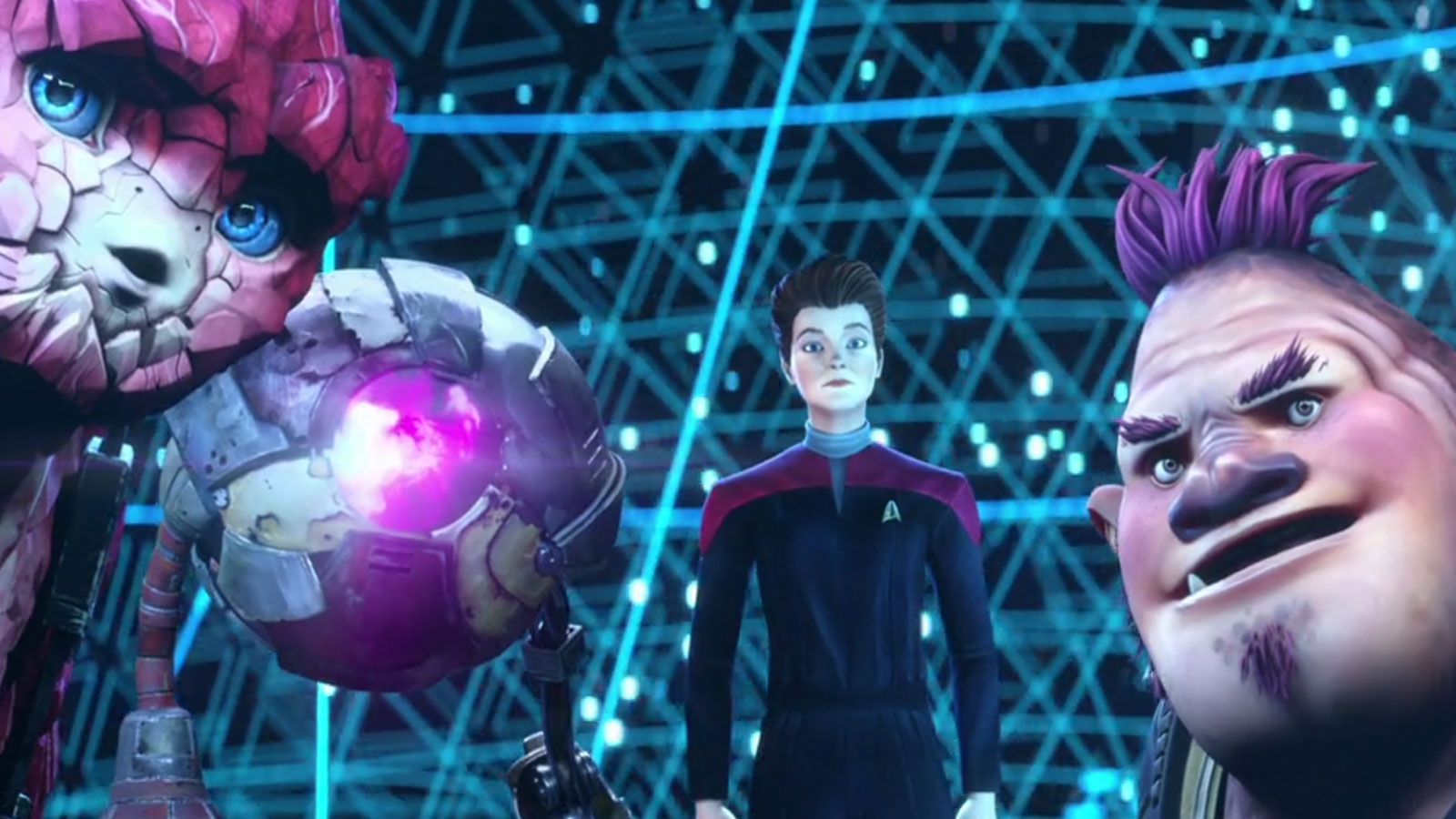 In the cleverly-titled “Starstruck,” our young heroes realize they have the ability to chart their own course through the stars with their newly acquired ship, the Protostar, but also realize they’ll need to be resourceful and collaborative to survive the dangers space presents.

Of course, they have help: the holographic version of Captain Janeway (Kate Mulgrew). At the beginning of the episode, she introduces the kids to not only their ship but the Federation itself. The captain then notes at the end of the episode that the crew is much like the Federation when it was formed: a collection of species who barely knew each other but ultimately worked together to accomplish great things. This analogy is a great way for new fans (kids) to be introduced to a foundational part of Star Trek, and it serves as an effective bookend for this episode.

Dal (Brett Gray) is at first reluctant to solicit Janeway’s help in operating the ship, believing he can captain it himself. He also has his hands full with not only exploring the vessel, including the spacious captain’s quarters which he claims for himself but dealing with their resident hostage, Gwyn (Ella Purnell). Content with throwing her in the brig, for now, Dal, in his thirst for freedom, has his crew chart a course for a nearby phenomenon, not heeding Janeway’s warning about the dangers such a destination represents. The kids find out soon enough, though, as the Protostar finds itself trapped in the gravity well of a collapsing star, and their efforts to get unstuck prove fruitless.

We want to note that Prodigy is clearly a gorgeous show, and seeing the Protostar trapped in this star formation is absolutely beautiful. Folks who are shunning this show because it is “made for kids” are really missing out on some of the most beautiful art direction and animated we’ve ever seen.

After calling the wrong shots and facing immediate death, Dal eventually summons the humility to ask Janeway for help. The seasoned captain, coffee cup in hand, wastes no time in exercising her experience over the rag-tag crew. Director Alan Wan uses the moment where Janeway assumes command as a chance to revive a hint of the Voyager theme, letting fans see the captain back in action after 20 years. It’s a great moment and will surely please Voyager fans.

Gwyn uses the chaos of the crew’s escape to try and get off the ship using a type of technology we’ve never seen in Star Trek before: a vehicle replicator. During the replication process, Rok-Tahk (Rylee Alazraqui) confronts Gwyn, and a fight within and around the replicator ensues.

Rok-Tahk suffers an interesting crisis of character in this episode. Her bulk and friendly childish demeanor are at odds with each other, and she gets frustrated that her captain ops to use her as a henchman over anything else. Her anger is understandable, and we’re interested to see if this aspect of the character is revisited in future episodes, considering how much it seems to bother her here. Prodigy seems to be leaning into specific lessons in each episode, which helps make the show more digestible for kids. We get the sense that “Starstruck” speaks to how a person should stay true to themselves instead of conforming to how other people think they should behave. For Rok-Tahk, that means that just because you appear to be a hulking monster, you don’t need to be a hulking monster. For our money, that’s a pretty important lesson to teach a child.

Besides the crisis of character, Rok-Tahk, more than her crewmates, is given other memorable character moments in the episode. Her exchange with Janeway and Jancom Pog (Jason Mantzoukas) in the mess hall about eating food they were provided in prison speaks to how innocent and inexperienced she really is, as does her immediate desire to be a part of the Federation. She also shows quite a bit of empathy when she is the only one who thinks to bring food to their resident captive. This Brikar is quickly becoming a standout character in the show, thanks in no small part to Alazraqui’s performance.

“Thank you. You saved our lives.”

“I only nudged you all in the right direction. You did the rest.”

“Yes, I guess I did know when to ask for help… which is what a natural-born captain would do. You’re welcome!”

One thing is for sure, though. The primary focus of this episode is teaching kids that it is okay to ask for help, something Dal admits to Captain Janeway at the end of their crisis. As the young captain says, being a good leader is knowing when to ask for help. It’s moments like these when parents will surely appreciate the lessons this show imparts on its young audience, and that makes us enthusiastic for this show more than anything else.

Taken together, “Starstruck” continues the impressive production values the show introduced last week. We get the sense that each subsequent episode will be more beautiful than the last, but ultimately that’s just icing on the cake. These young characters are on a path toward self-discovery, learning about themselves as much as they learn about their new home and the space they travel. We can’t wait to see their journey continue.