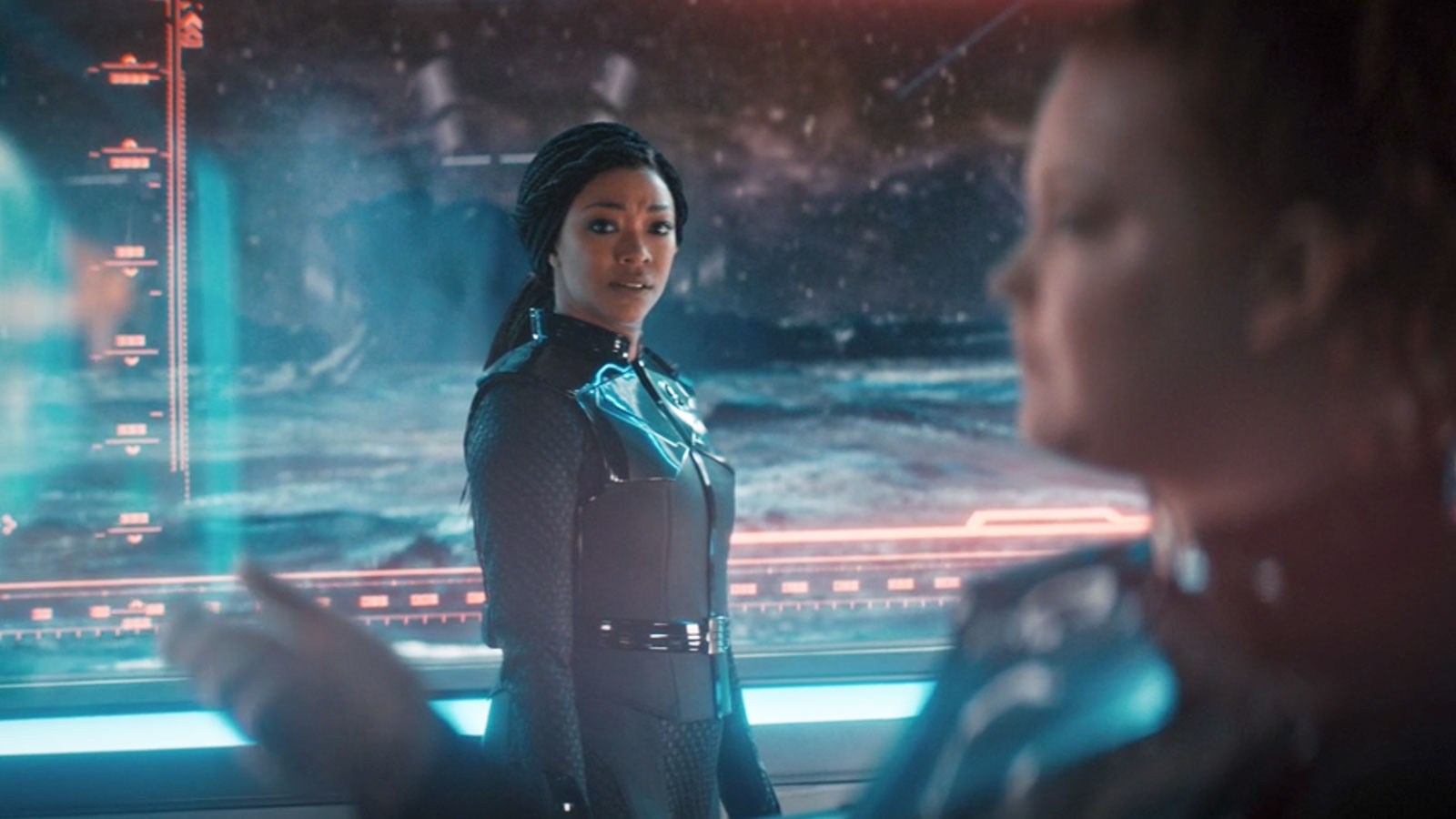 After a fast-paced start to season four, “Choose to Live” pumps the brakes a bit as the season’s focus turns inward toward its characters. We get some remarkable character moments, as well as an intriguing, nearly standalone sci-fi plot within the backdrop of the season’s overarching environmental threat.

The episode opens with a deadly attack on the Starfleet vessel USS Credence, which is practicing the same kind of dilithium diplomacy we saw Burnham and Book doing in the season premiere. The assailants are soon revealed as rogue Qowat Milat, the sect of Romulan warrior nuns first introduced in Star Trek: Picard but then seen in Discovery‘s “Unification III.” If you remember that episode, you’ll know that Burnham’s mother, Gabrielle (Sonja Sohn), is a member of this sect, so it should be no surprise when she appears to help track down the attackers, who are led by a Ni’Var citizen, J’Vini (Ayesha Mansur Gonsalves).

Gabrielle and Michael Burnham (Sonequa Martin-Green) are tasked with jointly capturing J’Vini and determining why she needed the dilithium, considering the Federation has made it known they will provide the valuable material to any legitimate requester. The partnership is seen as a goodwill operation that will bring Ni’Var and the Federation even closer together in light of Ni’Var’s impending re-entry into the organization. Making things more complicated, though, is the fact that Gabrielle has a personal connection to J’Vini. She tells her daughter that J’Vini was the one who helped her acclimate to the future when she arrived, so Gabrielle welcomes Burnham’s steady hand on the mission, knowing the younger Burnham will be able to do whatever it takes to bring J’Vini to justice.

Burnham and her team track the dilithium to a seemingly uninhabited moon, but it’s clear J’Vini is trying to protect something beneath the moon’s surface. After an initial attack by J’Vini’s forces that kills one of the Qowat Milat accompanying Gabrielle, Burnham, her mother, and Sylvia Tilly (Mary Wiseman) head under the planet’s surface to see what is worth killing for.

Tilly is on this mission for a particular reason: she is looking to get out of her comfort zone, advice given to her by Doctor Hugh Culber (Wilson Cruz) in an effort to help Tilly deal with her recent unsettledness. In this episode, Tilly mentions to Saru (Doug Jones) how she appreciates the new class at Starfleet Academy, folks who seemingly have a clear purpose and know exactly what they want to do in life. She remembered feeling that way when she was at the academy, but not so much now. Whereas Tilly first tries minor changes in her life, like eating new food or checking out new hobbies, it’s clear she needs a bigger change. Upon a recommendation from Saru, Burnham allows Tilly to come along, thinking her diplomatic skills could help on the mission.

Under the moon’s surface, Burnham and team find a remarkable discovery: the moon is actually a ship repurposed by an alien race – the Abronians – to escape their dying planet. The aliens are stored in cryostasis, waiting to be awakened when they reach their destination. J’Vini, having heard a telepathic distress signal from one of the aliens, is determined to protect them and help them find a new home; she needs dilithium to move the moon should the gravimetric anomaly come their way. It’s a heroic cause, sure, but J’Vini’s mission has come at the cost of innocent lives.

Thanks to some adroit negotiating by Burnham, J’Vini lets the team help her fulfill her mission, and in exchange, she turns herself in for the murder of Starfleet officers. Burnham and her team are treated to a wonderful sight: Abronians awakening and finding their way to a nearby planet to call home. It’s a rewarding end to the mission, but to Burnham’s chagrin, J’Vini is released to Ni’Var upon completion of their mission.

Meanwhile, Paul Stamets (Anthony Rapp) is obsessed with determining the nature of the Dark Matter Anomaly (we are thankful this threat now has a name besides “the anomaly”). Stamets needs the Ni’Var Science Institute to help prove the DMA is in fact a primordial wormhole, as the anomaly fulfills four of five needed scientific characteristics of such a phenomenon, except for one: the presence of tachyons. Cleveland Booker (David Ajala), still haunted by the death of his family and homeworld, comes along, as that’s the only way he can help do something against the DMA. Going to Ni’Var turns out to be a fortuitous decision.

The Ni’Var scientists are unsuccessful at proving the last piece of evidence needed to classify the DMA as a primordial wormhole, which doesn’t sit well with Stamets. But there is a last-ditch way to try to prove the presence of tachyons: a mind-meld with a person who witnessed the DMA’s destruction first-hand. Despite the sadness and pain, such a mind-meld will cause by making him relive the event, Book jumps at the opportunity, thinking it might relieve some of the guilt he feels for not saving his family.

In what we think is the most memorable scene of this episode, Book does indeed re-experience the death of his planet. While he helps prove the lack of tachyons, something far more important happens: he gets one last bit of insight into his final moments with his family. Specifically, Book sees this nephew, Leto (Luca Doulgeris), steal one last loving look at Book while Book was talking with his brother. This is a quick moment that Book didn’t notice when it was originally happening, but it’s an impactful, reassuring revelation for the grieving man, who thought his family didn’t know how much he grew to appreciate them after reconnecting with them in season two.

We appreciated that Book’s reliving of his planet’s destruction in “Choose to Live” helps inform the events of the season premiere, “Kobayashi Maru.” Taken by itself, one might consider the longing looks and slow-motion cinematography in the latter episode in the minutes before Book’s family’s death as out of place. But, with the additional perspective given in “Choose to Live,” the two episodes work together to create a touching, tragic portrait of characters just before their demise. It’s an emotionally healing moment for Book, who at the end of this episode is able to look at a holographic representation of his homeworld’s forest, something he wasn’t able to bear before. Kudos to Discovery, and specifically writer Terri Hughes Burton, for playing grief out over multiple episodes in such a visceral way and giving time for a character to grieve without making it feel rushed. The lesson this episode offers is that it’s okay to sometimes revisit painful memories, as one can gain insight that will help them recover from such trauma, and we think this is a great lesson for Star Trek to impart.

Book’s connection with his family, even though memory, is just one way “Choose to Live” focuses on key interpersonal moments. In another vital part of this episode, we finally see Gray Tal (Ian Alexander) get his own body. Alexander is, of course, the first transgender actor in Star Trek, and as such his character arc has closely mirrored the struggles of trans people in getting recognized as their “true self.” After a tense joining process assisted by Guardian Xi (Andreas Apergis), Tal is inserted into an android body. The character can at long last interact with the world around him, including his partner, Adira Tal (Blu del Barrio), and Doctor Culber, both of whom have been steadfast allies in the joining process. Having a trans character achieve such a poignant victory is a watermark moment for that community’s representation on television, and the event is celebrated in this episode via a lingering look at Tal’s amazement and relief following his awakening. Bravo to the production team for tackling such a sensitive topic using existing Star Trek lore and careful, attentive writing.

“You must accept you could be lost.”
“I’m lost without this. I’ve been living in an in-between place for too long already. I have to try.” Guardian Xi to Gray Tal, on the dangerous joining process

Our final thoughts on this episode involve the state of the Federation. We continue to be intrigued with President Laira Rilltak (Chelah Horsdal). She is clearly a shrewd politician, as she deftly views the capture of J’Vini as a political stunt, a motivation that is perhaps even more important to her than bringing a mercenary to justice. Moreover, this episode gives us a bit more context of how President Rilltak is running the Federation. As Admiral Charles Vance (Oded Fehr) notes to Burnham, the Federation is like an orchestra: Burnham is the first-chair violinist, flashily performing feats of skill, whereas Vance is the drummer, keeping the orchestra steady. But Rilltak is the conductor, telling everybody else what to do and when to do it. It’s an intriguing comparison, and we can’t help but feel this is a bit of foreshadowing. Will Rilltak at some point order Burnham and/or Vance to do something totally against their instinct and training? Will the conductor force the orchestra to play a song they don’t want to perform?

It’s that question, as well as how and if Stamets is able to prove his NDA wormhole theory (and the ramifications thereof) that are keeping us intrigued. As it stands, “Choose to Live” is a fantastic entry in this season not because it’s flashy or action-packed, but because it gives room for a few characters to experience watershed moments.

Star Trek: Discovery returns next week with the fourth episode of season four “All is Possible” on Thursday, December 9th.