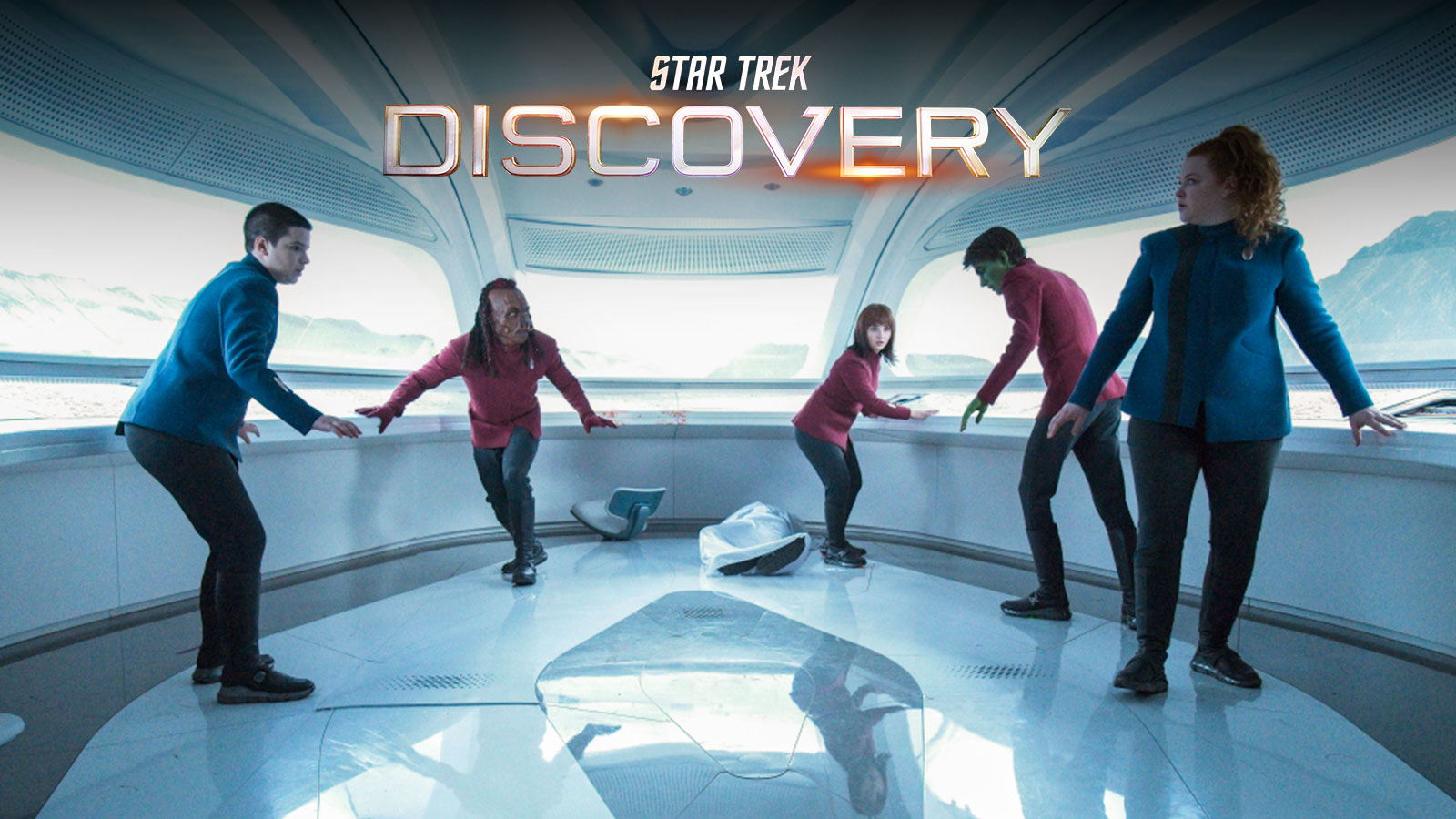 After hinting at a major change for one of Discovery’s main characters, “All is Possible” delivers this shake-up in the form of a major character leaving Discovery, ostensibly for good, to find their destiny elsewhere in the 32nd century. And we have a life-or-death situation involving a handful of rookie academy cadets to thank for that decision.

Yes, we said goodbye to Sylvia Tilly (Mary Wiseman) this week. Indeed, this episode sticks out in our mind mainly because it illustrates nicely how much Tilly has changed since season one. The ensign who shared a room with Starfleet’s most notorious traitor (wow, that seems like a long time ago…) was awkward, inexperienced, and unsure of herself. Flash forward to “All is Possible,” and she is leading a team of cadets on a training mission thanks to a prompt from Doctor Kovich (David Cronenberg), who wanted a Discovery crew member involved in training the cadets. Ultimately, Tilly relies on her leadership skills cultivated through numerous trials and tribulations to lead the rookies and Ensign Adira Tal (Blu del Barrio) from certain death.

On that note, kudos to Mary Wiseman (and the show’s writers, of course) for portraying Tilly’s evolution in such a gradual way. In “All is Possible,” Tilly, despite all her experience, is still clearly grappling with leadership roles, but she always powers through her uncertainty to make group decisions – even going out of her way to risk her life to buy her crew a few valuable seconds to get rescued. She also has to manage competing personalities while struggling to survive, no small task when the cadets involved differ in such drastic ways.

Tilly’s plot, at its core, is quintessential Star Trek. How do you take a group of people who seemingly have nothing in common, and are actually actively aggressive toward each other, and make them work together for the good of the group? Tilly knows: you just need to communicate. She asks questions, listens, and makes the group find common ground on which they can build a relationship. Her diplomatic efforts pay off, as she leads her team to safety after a fierce crash-landing during a routine survey mission, and in the process realizes her destiny in this time period isn’t on Discovery but at the newly reformed Starfleet Academy.

We can confidently assume that Tilly’s departure is permanent, as her goodbye with Michael Burnham (Sonequa Martin-Green) is touchingly reflective, punctuated by a picture of Tilly and Burnham from season one next to the pair as they talk. While we were appreciative of this scene, we can’t help but feel other goodbyes were warranted. At the very least, Tilly and Saru’s (Doug Jones) relationship certainly begged for an extended farewell. After all, it was largely Saru’s mentorship that built Tilly’s leadership and command abilities to where they are today. We also thought a conversation with Tilly and Doctor Hugh Culber (Wilson Cruz) on Tilly’s move to Starfleet Academy would have been welcome, as it was Culber’s counseling that made Tilly realize she was destined for something else. Plus, he was the reason she joined the cadets’ training mission in the first place.

While Tilly was off on her final adventure, Burnham and Saru found themselves playing politics at the behest of Federation President Laira Rillak (Chelah Horsdal), who wanted the two officers to attend negotiations between Ni’Var and the Federation in place of Admiral Charles Vance, who is supposedly sick. The two entities have almost reached a deal to get Ni’Var back into the Federation, but a wrench gets thrown into the gears just before the deal is complete: Ni’Var wants an exit clause written into the agreement so that if they become unhappy with the Federation, as they did just after the Burn, they can leave the alliance. Rillak thinks this is a deal-breaker, as it would make the Federation look weak at a time when they are trying to reassert themselves on the galactic stage, and she clandestinely orders Saru to talk up the Ni’Var president, T’Rina (Tara Rosling), and determine what’s really going on. Burnham, meanwhile, is tasked by the president, although not explicitly, to figure out a solution herself to this impasse.

Saru ultimately discovers that President T’Rina is simply trying to appease members of Ni’Var society who are weary of binding Ni’Var to the Federation again. Burnham, ever the empathetic and elegant negotiator, determines a new committee should be created, diplomatically resolving issues as they arise between the Federation and its member worlds. For the Federation’s relationship with Ni’Var, an ambassador with a vested interest in each entity should be of service. As a person with Vulcan upbringing and a member of the Federation, Burnham suggests it be her who serves as this link between worlds. The two leaders agree and a deal moves forward. Of course, some political intrigue is revealed at the end of the episode: the two presidents had actually conferred previously and knew this exit clause would become a deal-breaking issue, and thus needed a solution to present itself without seeming like either one was compromising unfairly. We’re curious to see how Burnham’s shared tie to both Ni’Var and the Federation will play a role this season.

In our view, the two main plots of this episode share the same theme: achieving the impossible by bringing people together. Had Burnham not purposed that she, as a representative from both Ni’Var and the Federation, be the ambassador that binds the two entities, that once-powerful alliance would have shattered, and billions of people would have been impacted. Tilly, meanwhile, achieved the near-impossible – getting her cadets home safely despite enormous odds – by banding them together via their common goal and common ground. In this sense, we think Gene Roddenberry would have particularly approved of this episode, as it continues one of Star Trek‘s most relevant themes: collaboration through communication.

“The anomaly has ignited old and new fears alike. Some have responded with a turn toward isolationism.”

In the spirit of Roddenberry’s penchant for commentary, we also want to mention how the two main plots of this episode helped solidify our view that the DMA is a stand-in for COVID; it is an ever-present threat that disrupts many things throughout the galaxy. Starfleet Academy, for example, needs as much collaborative personnel as it could get now to help solve the threat, as Kovich explains to Tilly; the Ni’Var, meanwhile, reassess their diplomatic needs in the face of the DMA. So, while the anomaly doesn’t directly impact anybody in this episode – and indeed, we don’t even see it this week – its lingering presence is keenly felt. Burnham, in her captain’s log, explains how Discovery‘s crew is getting mandatory downtime due to the stress of the threat. Even Saru reveals to President T’Rina that he has recently wanted to learn how to meditate to help himself deal with the uncertainty the DMA poses. Taken together, it’s an eerily familiar situation.

Rounding out this episode are a few scenes between Cleveland Booker (David Ajala) and Doctor Culber. Culber, as the ship’s de facto counselor, is helping Book heal his mind and soul after the death of his homeworld. Culber, to his credit, tries to use an unorthodox method on the grieving man: using programmable matter to imitate Kwei’tholum’Kwei, the Kwejians’ healing ritual in which the person connects with the planet, which now of course isn’t possible due to their world being destroyed. Book initially is frustrated by these faux-healing rituals, and Culber isn’t shy about the grieving process; he asserts to Book that his healing will take a long time. It’s refreshing to get such an honest look at the grieving process, something Discovery has done quite well this season with Book, but considering this subplot is limited to two or three scenes, we don’t think it was given enough time to be truly effective.

Ultimately, while “All is Possible” will likely be remembered as the “one where Tilly leaves Discovery,” it should be remembered for another important reason, too: it illustrates nicely why it’s important to trust others during times of crisis. Discovery has a reputation as one of the most reflective and emotionally intelligent shows out there, and this episode is no different. That’s alright in our book.

Star Trek: Discovery seasons one, two, and three are available in a Blu-ray box set now on Amazon.