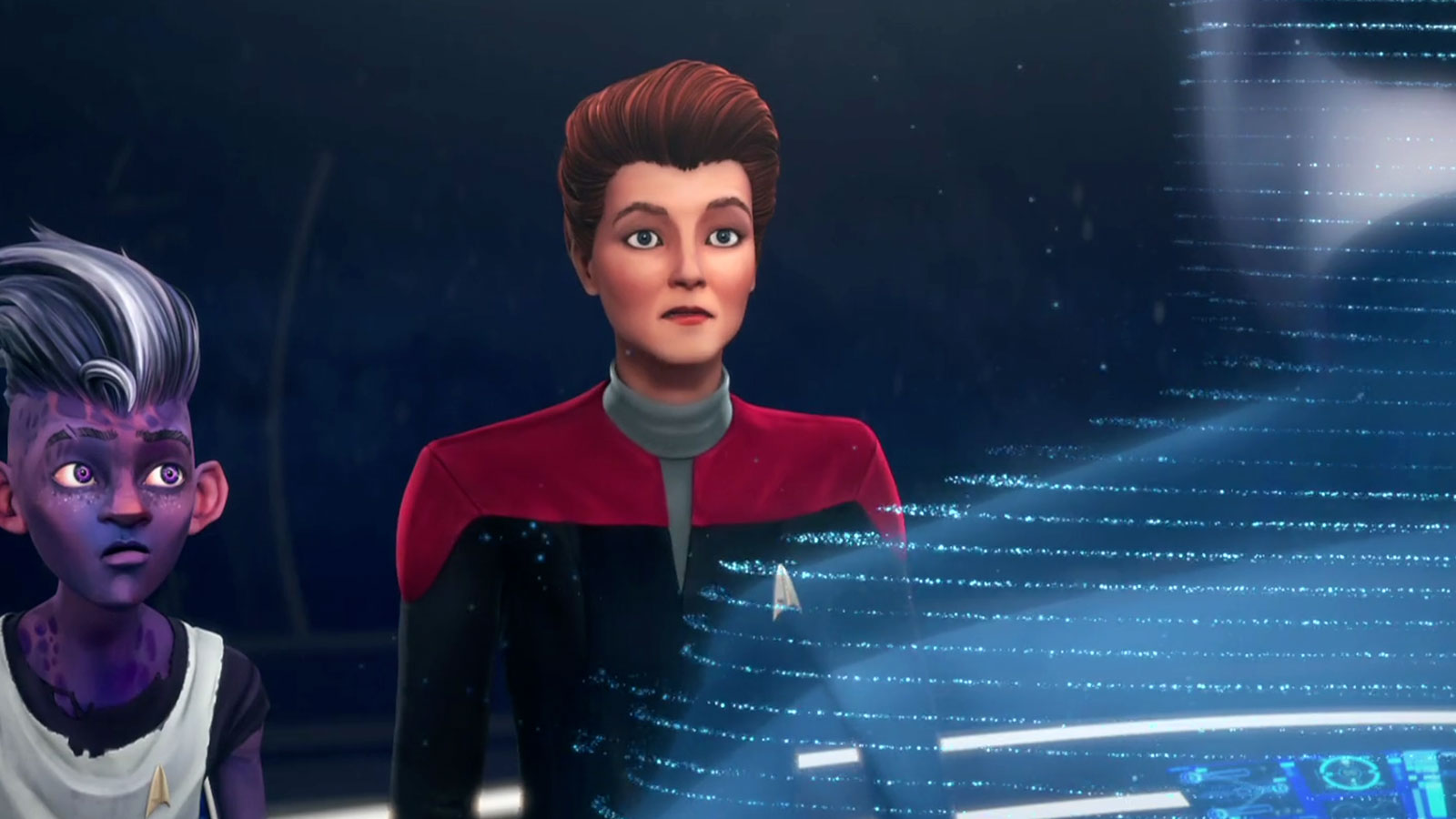 You’ve heard the saying “You don’t know where you’re going until you know where you’ve been,” and it seems Star Trek: Prodigy’s creators have, too. The show’s mid-season premiere embodies that saying, as the young captain of the Protostar learns how to be a great leader to his fledging crew thanks to some of Starfleet’s most heroic figures.

Prodigy, the first 3D-animated Star Trek show, blew away our expectations during its initial five-episode run last year, and its return shows that we can look forward to more of the same beauty, intrigue, and respect for its roots that made the first five episodes so great to watch.

After traveling 4,000 light-years during the harrowing escape from The Diviner (John Noble) using the Protostar‘s special warp drive, self-appointed captain Dal (Brett Gray) is faced with what to do next. His crew, including Zero (Angus Imrie) and Jankom Pog (Jason Mantzoukas), advocate for contacting the Federation to ensure safety from The Diviner, but Dal ignores them because he doesn’t believe the Federation would help people who hijacked their ship, and he wants to enjoy their newfound freedom.

As they explore the ship looking for Murf (Dee Bradley Baker), Dal and Jankom come across the holodeck, and, guided by Holographic Janeway (Kate Mulgrew), find the famous Kobayashi Maru program. Janeway warns that Dal is not ready for such a challenge, but Dal, headstrong and stubborn as always, start it anyway, thinking completion of the simulation will earn him the crew’s respect.

What the audience gets next is a treat.

Taking place aboard a replication of a Galaxy-class starship, Dal gets to choose his crew for the challenge; after telling the computer to give him some of “the best you’ve got,” a few familiar faces materialize at duty stations on the bridge. Helping Dal in the Kobayashi Maru is TOS-era Nyota Uhura, TOS-era Spock, Odo, TNG-era Beverly Crusher, and, once Jankom leaves, TOS movie-era Montgomery Scott. Moreover, these characters are voiced via archive footage from the various actors, so we get lines from Nichelle Nichols, Leonard Nimoy, Rene Auberjonois, Gates McFadden, and James Doohan.

It’s quite a pleasant surprise to hear these legacy characters, and having them help Dal symbolizes not only how the young captain is learning from Starfleet’s heroes, but metaphorically how Prodigy is respecting its roots – something we’ve noted this show doing before. But even Starfleet’s finest can’t help the brash captain complete the infamous no-win scenario, and it’s to Dal’s credit (and his frustration) that he repeatedly tries and fails the test.

Ultimately, it’s clear Dal can’t beat the odds no matter how creative he gets, but that’s not the point of the scenario, of course. What does result from his experience in the program is a short but enlightening exchange with Spock, where Dal realizes something he’s been missing as captain: the humility to listen to his crew. The fact that Dal learns this lesson through Spock, one of Star Trek‘s most prominent figures, will surely make any fan’s heart swell with joy, and kudos to Prodigy‘s writers for finding relevant quotes from Nimoy’s various appearances to carry Dal’s story home.

“You’re captain of this ship. You can’t afford the luxury of being anything less than perfect. If you do, they lose faith, and you lose command.”

“But I’m not perfect. I’ve never captained a ship, and I’ve never had a crew. What do I know?”

Spock (using audio from “The Enemy Within”) to Dal

Outside the holodeck, Gwyn (Ella Purnell) is still grappling with how her encounter with her dad went down on the Murder Planet. His quest for the Protostar outweighed his love for her daughter, which is especially confusing for Gwyn considering she (or anyone else, for that matter) doesn’t even know what makes the Protostar so special. Asking Janeway doesn’t help, either, as the hologram’s memory banks have that information locked out.

One thing that is revealed to the audience is how Gwyn came to be The Diviner’s so-called “progeny.” Years ago, The Diviner was in dire straits: he was the last of his species, and the key to his survival seemed to be in finding the Protostar. However, since the search for the ship was already proving to be exhaustive, he chose to create an offspring, Gwyn, as a failsafe.

Gwyn ultimately discovers that information on the Protostar‘s original mission is encrypted within Janeway’s memory banks in the language of Gwyn’s homeworld, which is mighty odd for a Federation ship. Using her keen language skills, Gwyn unlocks tons of data about the ship and its mission, including a major discovery: our young heroes weren’t the Protostar‘s first crew. Indeed, the ship was previously under the command of…. wait for it… Chakotay (Robert Beltran)! But we’ll have to wait until next week to learn more.

Taken together, “Kobayashi” is an excellent return for Prodigy, and is sure to delight new and returning fans alike. Creators Dan and Kevin Hageman have given a major head nod to Star Trek of old and having Dal cross paths with these legacy characters, albeit holographically, was such a great decision. While this entry will likely be remembered for the legacy cameos, let’s not forget about the major questions arising from this episode: why was Chakotay commanding the Protostar on a mission to the Delta Quadrant, with a holographic Janeway at his side? How did the ship end up entombed on Tars Lamora? And what secret did the Protostar hold that was the key to The Diviner’s continued survival?