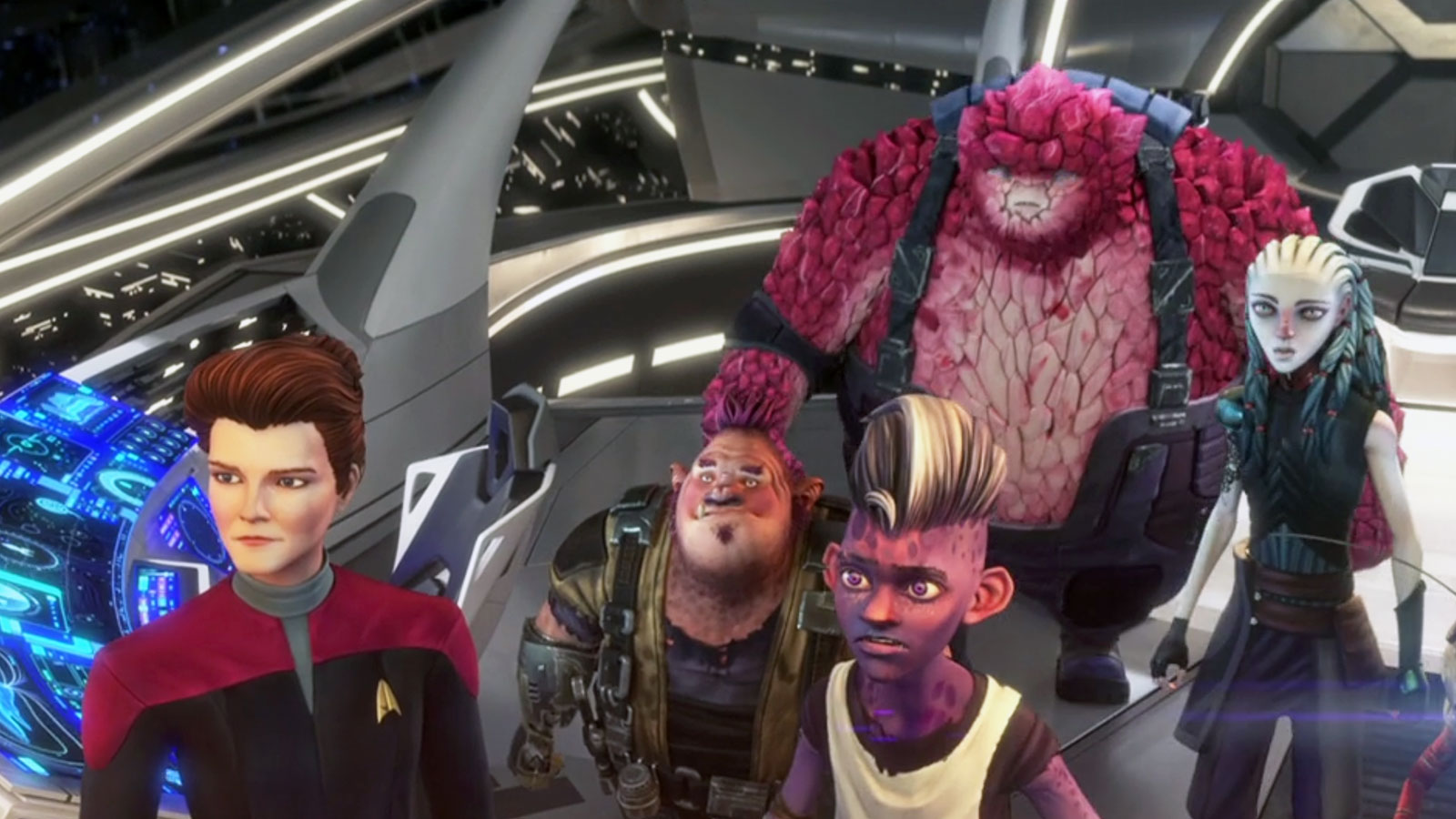 After the euphoric high generated from last week’s nostalgic “Kobayashi,” Prodigy‘s next installment is a bit less exciting, turning its focus inward to one of our young heroes. It’s an episode that shows our crew seeking out new life — the most important Starfleet mission — but without the best intentions.

As they try to unravel the mystery of why Chakotay (Robert Beltran) was the previous captain of the Protostar and what happened to his crew, Dal (Brett Gray) and our young heroes receive a distress call from a Ferengi who Dal quickly recognizes as his adoptive mother, Nandi (Grey Griffin). Nandi is equally surprised to see the young man and laments how Dal was separated from her years ago.

Nandi seems to have gotten herself into a bit of a messy financial situation; she owes money from gambling debts, but she has a plan to get out of the hole. With the help of Dal’s crew, Nandi will retrieve a special crystal found only on a nearby planet that hosts a pre-warp civilization that has not yet made first contact with aliens. In return, Nandi will give Dal her ship’s cloaking device, which right now is useless to her without a power source. The Protostar, meanwhile, has that power source, and the crew sees using the cloaking device as a good way to avoid The Diviner.

It’s an exciting opportunity for the crew, but are they prepared to faithfully represent the Federation – or even themselves – in such a scenario? That’s the fear Holographic Janeway (Kate Mulgrew) has, as the captain is no stranger to first contact and knows what can happen to a civilization if first contact goes awry, but the crew casts aside her fears to help themselves and Nandi.

Prodigy once again showcases its remarkable animation and art design as the crew lands on Skeralyx. The desert planet is a sight to behold as the tiny Protostar nimbly lands at the place where the crew thinks there are crystals, but things quickly go south as the aliens residing on the planet try to communicate with the crew. At first, the aliens’ communication methods seem like an attack, but Gwyn (Ella Purnell), master of languages that she is, quickly determines the aliens are trying to communicate via harmonic waves. After proving their peaceful intentions, the crew finds their way to the room underground that houses the precious crystals, and they determine that the crystals are what give the aliens their communicative powers. Without them, their society would surely fall into disarray.

It’s here we want to note an observation we made about this episode and this series in general. We really appreciate how this show doesn’t talk down to its audience. You’ll hear much of the same technobabble – both real and sci-fi – as you would in any other Star Trek show. Case in point: Gwyn’s scientific analysis of the harmonic way the aliens communicate, or when Zero (Angus Imrie) concludes the aliens’ mastery of math based on the symmetrical nature of their structures. Such dialogue sounds like it would be home in any Star Trek show.

After hundreds of hours of material, it’s also refreshing to see Star Trek deliver an alien race that feels novel and foreign. The residents of Skeralyx are angelic life forms seemingly made of light and energy, with bespoke communicative powers that, when applied properly, can manifest as a choir-esque wall of sound. Prodigy’s depiction of these aliens makes you want to learn more about them, but the chance to do so is lost when, predictably, Nandi is not interested in how the aliens need these crystals. In a greedy rage, she grabs as many crystals as she can and leaves the aliens, and the Prodigy crew, at their own devices.

Nandi escapes the planet via her own cloaked ship, but not before Dal manages to place his communicator on the crystal. Back on the Protostar, Dal beams the crystal back to the alien cave, where it can continue to help its owners communicate. Through this ordeal, Dal (and young ones watching the show) learn an important lesson: you only know who your true friends are when you face adversity together. Nandi clearly wasn’t the loving adoptive parent he thought she was, as he learns she actually sold him into servitude and lied about trying to find him. She’s also set to be a continued thorn in their side, as the end of the episode sees her contact The Diviner to offer information about the Protostar.

Our one major complaint about this episode is that it leans into stereotypical Ferengi characterization: greedy, self-serving, and conniving. Nandi is so stereotypically Ferengi that she eschews the family for relatively minor profit. Recent Star Trek productions have seemingly moved away from such stereotyping. For example, in one Star Trek: Lower Decks episode. a Ferengi was introduced as a stereotypically greedy and shady character, only to show him at the end as a family-loving friend of one of the main characters. Likewise, in the aftermath of the attack on Mars, Star Trek: Picard fought against the idea that all androids were traitors and not to be trusted. Considering Prodigy is aimed at kids, we hope the show doesn’t lean into such stereotyping so obviously again.

In the end, “First Contact” may not carry the same charisma as its predecessor, but it does help fill in Dal’s backstory and inch the Chakotay plotline forward by revealing The Diviner’s right-hand man, Drednok (Jimmi Simpson) boarded the ship… but we’re still in the dark about why the ship was entombed in Tars Lamora.