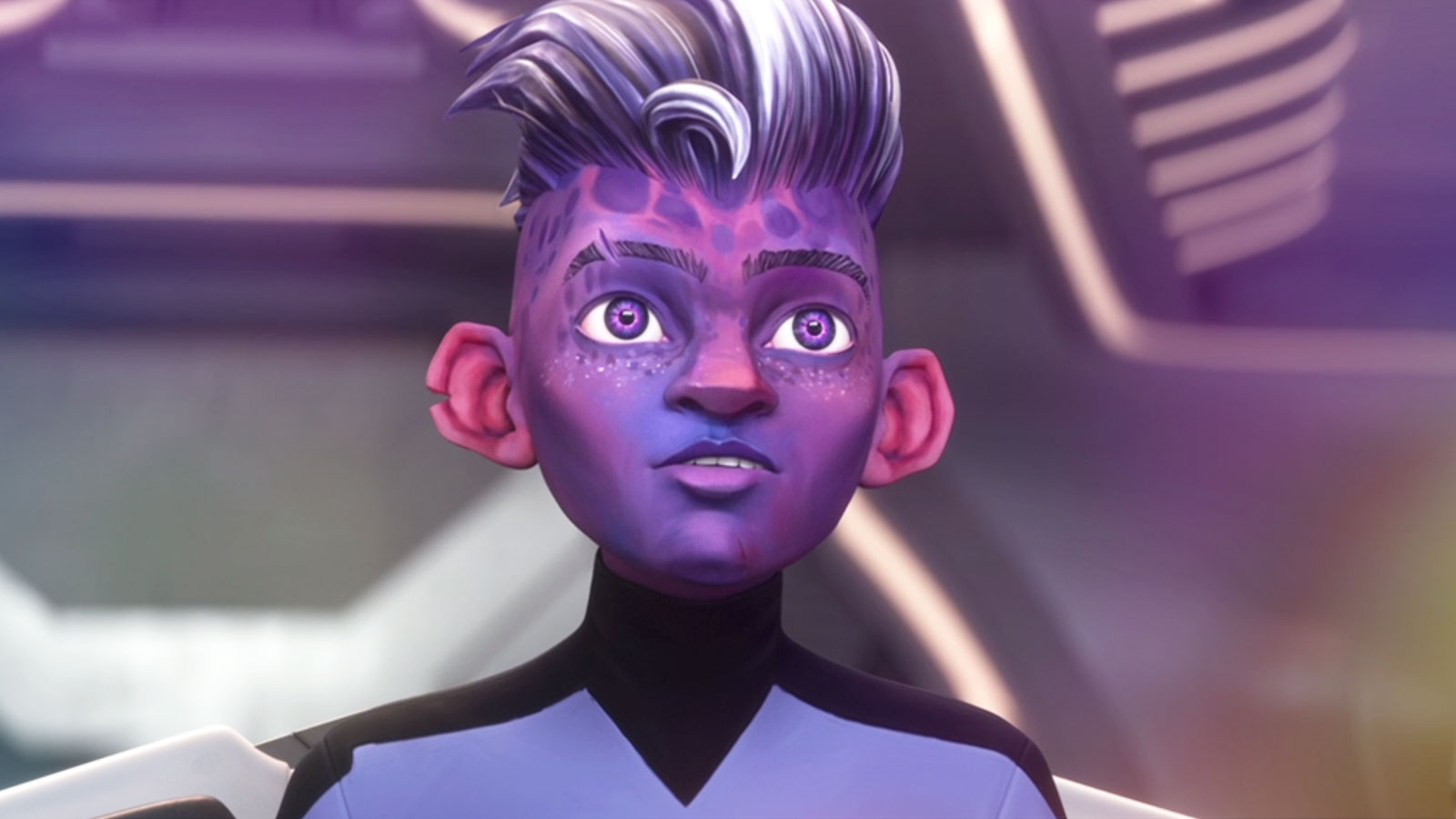 In part one of Star Trek: Prodigy‘s mid-season finale, the crew of the Protostar grow up a bit and embark on a daring mission to rescue those they left behind on Tars Lamora… but at what cost?

Our young heroes, still in awe of their success in breaking out of the temporal anomaly in last week’s excellent episode, get a message from The Diviner (John Noble): deliver the Protostar, or the Unwanted on Tars Lamora will suffer. The crew recognizes the risk such a mission presents, but they opt for the Starfleet way and craft a clever plan to both deny The Diviner what he wants while saving their brethren.

It’s clear the crew has come so far since they first met, but Dal (Brett Gray) is still hesitant about going back to Tars Lamora. Likewise, Jankom (Jason Mantzoukas) laments how they can barely save themselves, let alone others. Dal recognizes that this situation is their own Kobayashi Maru, but thanks to a pep talk from Gwyn (Ella Purnell), he gets on board with saving the Unwanted. Recognizing they need a killer plan, the crew get to work on… something, but naturally the audience isn’t brought in on the plan until later.

In the meantime, before warping back to Tars Lamora, our heroes adorn brand-new uniforms. Cosplayers rejoice! Seeing these characters in Starfleet uniforms is an awesome moment, and illustrates nicely how far they’ve come as a unit – but this scene is quickly succeeded by another, even more, awesome moment: Dal and his crew confidently commanding the ship as they head back to the mining prison.

“I just want to say… I know you never thought you were Starfleet material, but today you’re risking everything on a seemingly impossible mission to save others. To bring hope to a hopeless cause. Nothing is more Starfleet than that.”

The voyage back to Tars Lamora, punctuated by Dal’s “go fast!” command as the Protostar activates its unique warp drive, is wonderful. The accompanying visuals are taken from the series’ opening credits, and while we were always impressed with how visually spectacular the show’s opening credits were, we think seeing these scenes within the context of this episode makes these visuals even grander. The decision to go back to Tars Lamora will undoubtedly stand as the point when our heroes go from a rag-tag bunch of strangers to a full-fledged Starfleet-esque crew. It’s marvelous to watch.

Of course, The Diviner pulls a Darth Vader and alters the terms of the deal when the Protostar docks at the mining colony. It seems The Diviner had a change of heart since his last encounter with his daughter on the Murder Planet, and now wants her by his side. He wants to take Gwyn with him as he and Drednok (Jimmi Simpson) take the Protostar, which Gwyn ultimately agrees to as long as her crew gets the Rev-12. The Diviner agrees to the new deal, but just before the trio leaves, The Diviner destroys the colony’s environmental controls. This leaves Dal and company in a precarious dilemma – but it’s one they planned for.

The Diviner warps away thinking he has the Protostar and its proto-core, but this is when the audience gets clued into the crew’s plan. Back on Tars Lamora and hidden within a fake Zero (Angus Imrie) is Murf (Dee Bradley Baker), and within the indestructible Murf is the proto-core. Now, the crew needs to figure out how to stabilize the failing systems on Tars Lamora and escape with the miners, all before The Diviner returns with the incomplete Protostar to extract revenge.

We’ve seen this crew tackle challenges before, but this episode shows them doing something they haven’t done yet: putting themselves in harm’s way for the greater good. As they discuss in the episode’s beginning, they could go to the Federation and seek assistance, but that would mean The Diviner would extract his wrath upon the innocent miners of Tars Lamora. Instead, going themselves is the most dangerous, yet most altruistic option. The Protostar crew are now like the Starfleet crews we know and love and were thrilled with how this transition played out across the preceding eight episodes.

Of course, this episode leaves us with plenty to look forward to next week. How will Dal and company ensure the safety of the miners? How will The Diviner handle the surprise of being fooled, and why does he hate the Federation so much? How will Corrupted Janeway, the evil-looking hologram made by Drednok, play into The Diviner’s plan, and was the re-writing of Holographic Janeway something the crew planned for? And despite The Diviner teasing Gwyn with more information about why he yearns so greatly for the Protostar – and why the ship is their “salvation” – he never does spill the beans in this episode. He apparently doesn’t need his life-sustaining medical technology from the Rev-12 if he has the Protostar, so perhaps the ship really is the key to his survival? But how? We need to know!