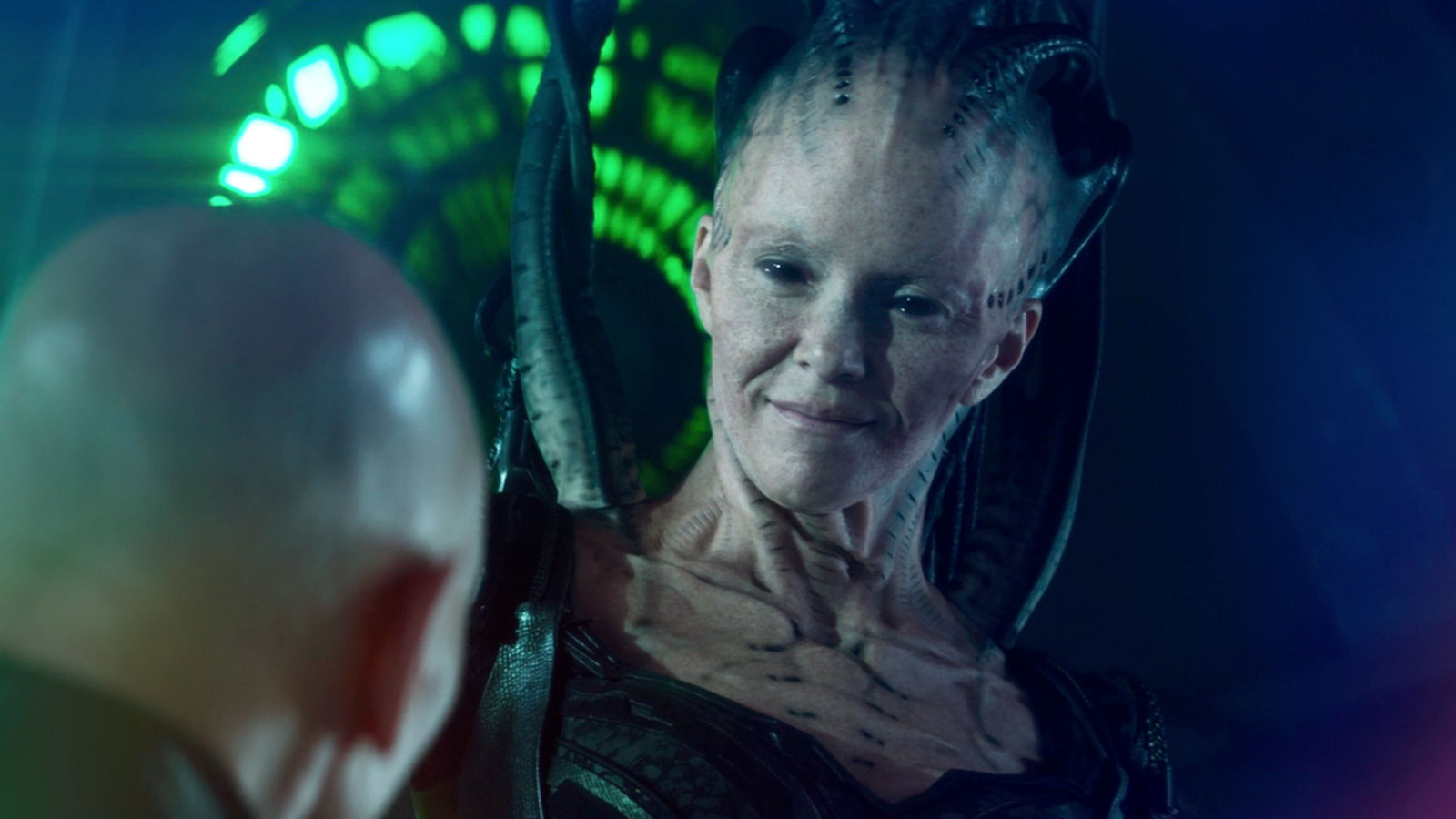 Star Trek: Picard revisits a well-worn franchise trope as Admiral Picard and crew travel back in time to prevent the Confederation reality from ever happening — and the personal stakes for this mission are raised in a big way.

After escaping the vile Confederation of Earth, Admiral Jean-Luc Picard (Patrick Stewart) and the crew of La Sirena use the slingshot-around-the-sun maneuver to get themselves to the Los Angeles of 2024. This is the place and time where the Borg Queen (Annie Wersching) says a singular change was made to the timeline that resulted in the Confederation and its atrocities. The voyage home, however, is rough on La Sirena, and the ship ultimately crash lands outside of Los Angeles with a major casualty: Elnor (Evan Evagora).

Yes, Elnor succumbs to the injury inflicted upon him by the Confederation magistrate (Jon Jon Briones) shortly after leaving Earth, but why exactly he died is interesting. Thanks to the major damage aboard La Sirena, the remaining available power could only be used for one of two things: powering sickbay to save Elnor or giving the Queen enough power to stay alive after her post-time travel stress. Picard asserts the Queen needs to survive if their mission is going to be successful, since she is the only link to the fissure in time, so Elnor’s death is in no small way on Picard’s hands.

While this event should be something that weighs on Picard heavily, unfortunately we don’t really see that grief play out. Raffaela Musiker (Michelle Hurd) is the one who takes Elnor’s death the hardest, and holds Picard accountable, especially since it is Picard’s nemesis, Q (John de Lancie), who caused all this pain and suffering. We wish we could have seen Picard grieve for the Romulan-evacuee-turned-warrior-nun who was so influenced by Picard; instead, we get one quick look at Picard observing Elnor’s body bag as the older man hangs his head. Perhaps the admiral is just stoic in the face of the overwhelming mission ahead of him?

Speaking of Q, having him pop up in Picard’s mind during La Sirena‘s warp around the Sun was an unexpected but welcome touch to this episode, as it makes us think he can appear at any point in any episode, not just ones where we know John de Lancie has a guest spot. More interesting still is what Q says to Picard just before they travel to the 21st century: “This is the only kind of life you understand. Shall we see what else has been lost in the wake of your fear?” What exactly is Q referring to in that first sentence? Picard facing immediate danger as he bears responsibility for what happens to those under his command? Q’s line will be an intriguing statement to keep in mind as we see what happens to our heroes in L.A.

As Picard asserts, the mission must go on: finding the Watcher that the Borg Queen said was on Earth. To help narrow down the location of this person, Raffi, Seven of Nine (Jeri Ryan), and Cristóbal Rios (Santiago Cabrera) venture into the L.A. of 2024, and this is where Star Trek: Picard ventures into some well-known territory: exploring the show’s contemporary time period.

Commenting on present-day circumstances is not just a Star Trek thing, but it has been done numerous times in the franchise’s history, be it Deep Space Nine‘s “Past Tense,” Star Trek IV: The Voyage Home, Voyager‘s “Future’s End,” or Star Trek: First Contact, just to name a few. “Assimilation” wastes no time before some of our characters muse on the drawbacks and weaknesses of 21st-century human culture and events. For instance, upon arriving in L.A., Raffi is held at gunpoint (while in a homeless district, no less) for whatever money the perpetrator thinks she has. Furthermore, Seven and Raffi observe a raging wildfire near L.A., a testament to the early 21st century’s out-of-control climate crisis. And Rios, thanks to a series of unfortunate events, finds himself in the middle of a U.S. Immigration and Customs Enforcement raid on a clinic that serves mainly undocumented immigrants.

Whereas the previous two episodes of Star Trek: Picard felt like pure escapism, seeing our reality in Picard’s reality is sobering. This isn’t a criticism of the show – after all, we couldn’t live in the Easter egg heaven that was the first two episodes forever – but simply a warning. In the end, this kind of societal commentary will feel quite familiar to Star Trek fans, and Picard exercises little tact or narrative temperance in conveying how screwed up our characters think the early 21st century is. Case in point: within minutes of arriving in L.A. and getting held up, Raffi observes this:

“He started it. A wonderful ambassador up against a backdrop of hope meets hopelessness. You’re killing it, 2024. You know, I’ve never been able to understand how a society can exist with so many contradictions and not collapse sooner than it did.”

As our characters explore L.A., Picard and Doctor Agnes Jurati (Alison Pill) remain on La Sirena to ensure the Queen gets back to full power so they can learn the exact location of the Watcher. The Queen appears to be trying to communicate in the way Borg often does — non-verbally — and therefore Jurati has a wild idea for her to “hear” these thoughts. Jurati suggests allowing the Queen to begin to assimilate her, which would permit the doctor to communicate with the Queen and bring La Sirena back to full power. This plan alarms Picard, understandably, as he recalls what it was like to be assimilated, but Jurati asserts the Queen won’t fully assimilate her before she gets the information she needs.

The two women connect, and certain “rooms” of Jurati’s psyche open for the Queen to explore while the process completes. Thus, we learn a bit more about Jurati thanks to the Queen’s intrusion and Jurati’s subconscious communication with Picard. We learn that there is a part of Jurati that is overwhelmingly sad – a personality aspect she masks with humor. This isn’t terribly surprising given some one-off asides by Jurati in the previous episode, but what is unexpected is Jurati saying she wishes Picard was her dad; this helps explain both her admiration and stubbornness with Picard. Furthermore, we learn about Jurati’s anger toward Picard and his feelings, or lack thereof. She asserts Picard must be miserable because he keeps himself from feeling feelings, a sensible assessment considering what we know about Picard’s halted romantic life. Picard, to his credit, takes this attack in stride and is more interested in helping Jurati through the quasi-assimilation.

Thanks to Jurati’s mental effort, the Queen regains her power, and with it a personality we haven’t seen yet. “Assimilation” is Wersching’s first chance to explore what the Queen is like outside of being in a Confederation holding tube, and it turns out she is charmingly sinister, slightly humorous, and coldly calculating. The Queen proposes a trade with Picard: his ship for the Watcher’s location. But it turns out Jurati did more than just power up the Queen (and ship) while being partially assimilated: she found the Watcher’s coordinates herself, as well as a vague sense of when the temporal divergence happens. (Although we wonder why Jurati was able to pull coordinate information from the Queen, but not a day and time.) Importantly, Jurati’s abilities impressed the Queen, so it’ll be interesting to see how any potential relationship between these two characters plays out.

That’s certainly not the only question this episode poses to the viewer. Who exactly is the Watcher? Will Raffi’s option of Picard’s poor leadership be remedied after the immediate crisis is over? We suppose that will depend on if Elnor comes back to life through some time travel magic; after all, Picard couldn’t say for sure if fixing the timeline would bring the Romulan back, much to Raffi’s chagrin. Rios’ storyline in this episode also presents its own questions. How much of a role will the clinic doctor (Sol Rodriguez) and her son play in his story? Clearly, there is a magnetism between him and the doctor, but to what end? And that’s not even the thing that should be forefront on Rios’ mind, though, as he did leave his combadge in the clinic where he was treated for a concussion upon arriving in Los Angeles; what implications will there be for leaving that technology behind? All this and more makes us really excited for next week’s episode.