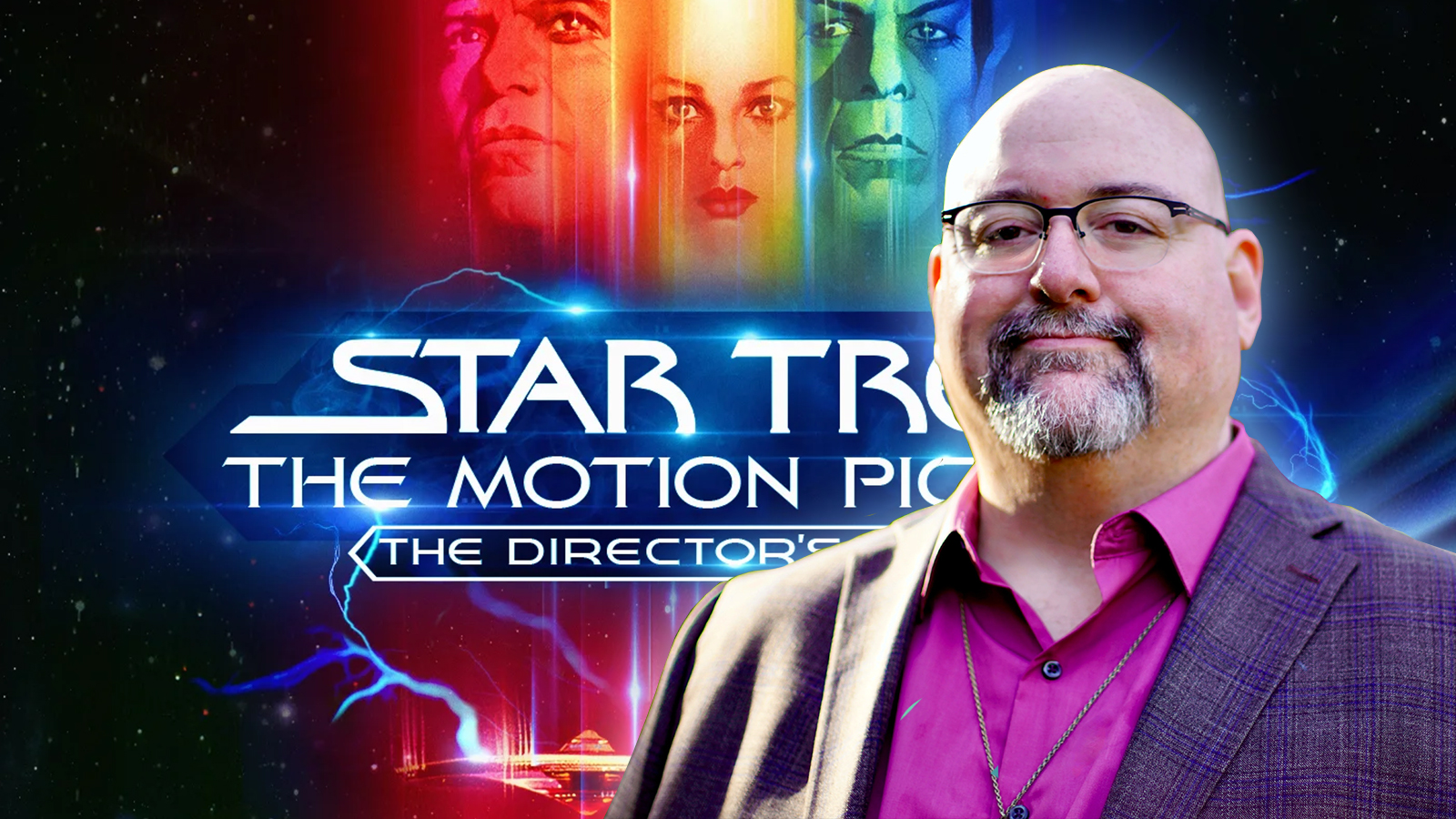 Not since the remastering of Star Trek: The Next Generation have fans been treated to the modernization of older Star Trek material. Yes, we’ve gotten gorgeous 4K transfers of the first four Star Trek films via last year’s excellent box set, but that release only upped the resolution and added high dynamic range (HDR) support. It was a welcome remaster, to be sure, but far short of a proper restoration.

Just in time for Star Trek‘s annual First Contact Day, the Director’s Edition of Star Trek: The Motion Picture is making its way back to screens in a big way. Producer David C. Fein, who worked on the 2001 Director’s Editon, and his team of audio/visual wizards have put blood, sweat, and tears into properly restoring, not just remastering, that 21-year-old release. Star Trek: The Motion Picture – The Director’s Edition trimmed countless scenes and added about 100 new visual effects to help bring the movie to life in a way not possible thanks to the rush to complete the film in 1979.

Starting April 5, Star Trek: The Motion Picture – The Director’s Edition is now in 4K and HDR, sure, but it also adds new scenes that were not included in the 1979 or 2001 releases, completely redoes various visual effects to add clarity and detail to the movie, and, as David puts it, allows the viewer to become more immersed in the film than ever before.

David sat down with TrekNews.net ahead of the film’s streaming release to talk about his experience returning to a movie that he holds such heart for, and why this version of the Director’s Edition is a truly special product.

TrekNews.net: Why does The Motion Picture hold such a special place in your heart?

DAVID: Well, there are many reasons why the movie holds a special place in my heart. As a kid, I had to be home at 6 p.m. every night to watch Star Trek because it was so important to me. And I loved how it was always story-driven. Classic Star Trek was about the story. It was years later before I realized it was because they didn’t have money for visual effects. But that was great because then there was so much effort to make the story be so powerful.

It’s interesting because when they finally got to the point of The Motion Picture, my childhood mind was blown by seeing the Enterprise on the big screen. It’s interesting because the story was powerful, but now there were visual effects, too. In some ways, the visual effects were just as stunning, but it was an interesting difference in balance between storytelling and visuals. But the film always meant the world to me because it’s the most Star Trek of all the movies. This film has been tested by being in an incomplete format [because of its rushed post-production in 1979], and in some ways, it hasn’t reached the level of completion until now, even compared to the [2001] Director’s Edition.

TrekNews.net: What are the biggest changes made from the 2001 Director’s Edition to this new release?

DAVID: The biggest change for this release is the edit. Because there were so many elements that were rushed in 1979, so many things were put in in case the visual effects weren’t complete on time. For example, when V’Ger fires an energy bolt at the Enterprise, and you see it around the ship and it dissipates, Sulu says, “the new screens held.” That’s the obvious statement in case the visual effect wasn’t complete. Another example is at the end of the wormhole scene, when Chekov says, “we’re out of it.” Lines like this were just bridging methods that were in the film because they didn’t know which visual effects they were going to have. So, the film was clumsy and didn’t have the pacing down.

For the 2001 version, yes, we filled in the blanks of visual effects that weren’t finished and we made all those edits, so the film had a flow and a narrative that helps carry the audience along. For me, it’s about that experience, and that’s what we amplified for this new version.

“We’re embracing the story like never before and in new ways.”Fein, on the various improvements to Star Trek: The Motion Picture: The Director’s Edition

One of the goals I gave to the team working on this project was that everything that distracted you in the movie needed to be fixed. One of my favorite changes in this new version is in the scene where Scotty and Kirk are in the travel pod. That effect was achieved originally by projecting those actors on the window of the travel pod, which gave them this bulbous look. Now, they’ve been adjusted so that they are positioned correctly. This new Director’s Edition was all about taking those unique opportunities to finish the film for the greatest experience and the least distraction.

TrekNews.net: That’s fascinating. So, stuff like that, and things like matte lines, have been totally cleaned up?

DAVID: Most of it has been cleaned up. We transferred a tremendous amount of footage. My god, the amount of material we were able to locate and transfer; the Paramount archive did a remarkable job keeping track of everything. Some of those matte lines are fixed because the color grading is right. With the color grading correct, you should never have seen those matte lines to begin with. And many of these other effects in the movie are restored. If it was something [VFX producer] Doug Trumbell’s team did, those effects were shot in 65-millimeter film and now scanned in 8K.

Going back to re-composite those effects digitally was just gorgeous. That’s where we were able to balance these effects and take out flaws and make it as beautiful as it could possibly be. Another thing is film grain: for every visual effect shot, I went in and rebalanced the film grain so it’s consistent throughout the movie and non-distracting.

TrekNews.net: That does sound beautiful. We’re curious: is there a part of you that will perhaps miss those visual inadequate?

DAVID: No, no, no, no. You got to understand — we were focused on making this film as compelling and cohesive as it could possibly be. And when you see a matte line, it brings reality into your fantasy. Why would I miss that? I couldn’t possibly miss it. I want you to have the experience I always dream about, which is sitting in a theater and just disappearing into the story.

Robert Wise said I should always focus on the story. Bob had me promise before he passed [in 2005] that I would never stop until this [restoring The Motion Picture] was done. He said to always use the best tools available. So, for example, there’s so much in the movie’s soundscape now, because it’s Dolby Amos. There’s an incredible amount of subtly that has been added. When you experience it, you’ll remember it, and that’s what great storytelling is all about – when you take every storytelling aspect and use it to get the story told as best it can be. [The sound] is not always supposed to be in your face. My expectation is everyone should enjoy the film. Like any great visual effect, if you don’t see it, that’s the best way it is.

It’s like when you first saw the 2001 Director’s Edition if you knew the theatrical version. Did you feel the Director’s Edition was like the Star Wars special editions, where suddenly a sound or visual effect takes a left turn you’re not familiar with? It should just feel right. And that’s what is so powerful about the sound work.

The color is a big deal, too. What people don’t really understand is that in 1979, because of the rush, they spent four days color grading the whole picture. Only four days! Because they were so rushed, they needed every scene to be balanced and flat. So that’s what everybody has lived with for 42 years. In the 2001 version, because we were working with video, we had to do color grading first, and then we did our work. There was no real way of balancing everything as we were going along. Now, because we were doing it on the digital negative, we could be a lot more precise scene-to-scene. Now for the first time, using proper color grading means the story unfolds better. The story is told through color just as much as through sound.

Stay tuned to TrekNews.net for our thoughts on the Director’s Cut restoration when it launches on Paramount+.