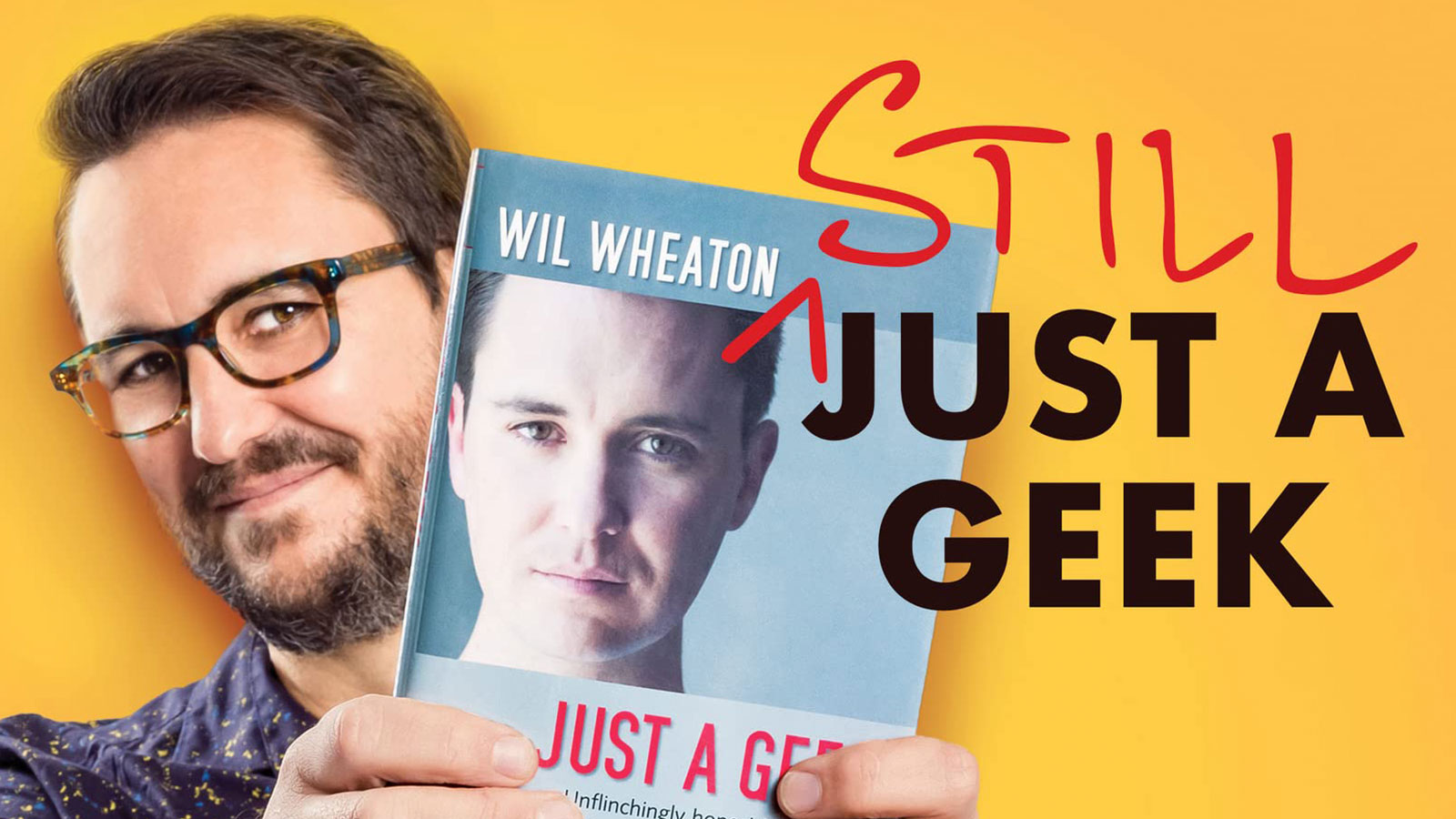 Wil Wheaton occupies a fascinating place in the Star Trek fandom space. One day he was an almost famous child actor and the next he got transported to the front and center, quite literally, onto the bridge of the U.S.S. Enterprise 1701-D as Wesley Crusher in The Next Generation. Wesley went from a recurring character to a mainstay and was eventually written off the show organically and with elegance — all in the span of just a few years. Wheaton then had to watch from the sidelines as the main cast ended the show and moved on to the world of feature films. While Captain Picard and the crew were off establishing first contacts and fighting various nemeses, Wil was on a journey of his own.

It was the early 2000s and Wil — on the brink of turning thirty years old — had found success acting in smaller films, started a family, and dedicated himself to the craft of writing. Along with regular columns in popular magazines, he started the blog Just A Geek in 2001. In 2004, he published a collection of his blog posts in a memoir of the same name, and eighteen years later, much like his friends in Star Trek: First Contact, returns to his collection in the new book Still Just A Geek to reflect on, reminisce and own up to the recollections from his past self. Wil also occasionally slips in articles, interviews, and assorted blurbs outside of the original book which gives us a glimpse of what life has been like for Wil following the release of his first book.

The hardcover book is nearly 9.5 inches by 7.5 inches long and holds in it a whopping 464 pages. The front cover is a perfect representation of what to expect in the book. It’s 2022 Wil looking at us, holding up a copy of Just A Geek, whose cover has 2004 Wil also looking at us. Both covers are telling portraits of the times they’re from but more importantly they’re telling portraits of 2004 Wil and 2022 Wil. As evidenced by his stoic face and the dull background, the weight of the world is on 2004 Wil’s shoulders. The 2022 Wil, wearing a color splash button-down and beaming with a smile, is happy and content. The page quality, the spine, and the overall presentation are supreme. William Morrow Publishing has done a great job with the presentation of the release.

Still Just A Geek makes you feel like you’re watching a movie with the director’s commentary track. Except Wil’s blog articles which have an immersive, stream of consciousness feel to them, are far more intimate than most movies. We stand side by side with 2004 Wil as he recalls a lot of memorable events in his life in the original book. There is, as expected, quite a bit of Star Trek content in the book. Convention appearances, his falling out with Creation Entertainment, experiences with the TNG cast, a heartbreaking William Shatner incident, his experience bringing back Wesley in 2002’s Star Trek: Nemesis and then receiving the news of Wesley being cut from the movie, and many more are covered in the book. There’s also a good amount of the non-Star Trek parts of Wil’s life. Being a child actor, writing, his family, being a geek, Lord of the Rings, STEM education, and much more are discussed in the book, proving that Wesley Crusher is to Wil, as he puts it, just “one small part of a pretty great life”.

Each page of Still Just A Geek collects text from the blog and the 2022 Wil adds his two latinum strips of commentary on specific sentences as annotations in the footer of each page. This is first and foremost a remarkably funny book. At times I had to put the book down to get through a laugh. Wil, with his self-deprecative, disarming sense of humor makes it clear that he is in on the joke and very well in the know about who Wesley Crusher is, how he has evolved, and all the jokes that surround him. There are also parts of the book in which 2022 Wil has to confront 2004 Wil’s problematic words. What 2004 Wil thought was smart and funny has, over time, been exposed as sexist, homophobic, transphobic language. 2022 Wil doesn’t dodge the bullet by skipping those parts of Just A Geek. He has left them in the book along with thoughtful, repentant words about these offensive paragraphs. As outlined in his introductory author’s note Wil explains that he left them in the book as is to show that change is possible and he’s learning and growing every day.

Whether you’re a Star Trek fan, a Wil Wheaton fan, or a fan of good books in general, I highly recommend grabbing a copy of Still Just A Geek. It has a couple of issues like the baffling decision to not include a table of contents — considering the number of headings and subheadings the articles have or omitting the inclusion of an occasional supporting photograph. But the roller coaster of experiences you get to ride through in the life of child actor-Wesley Crusher-convention star-movie star-writer-evil Wheaton-YouTuber Wil Wheaton far outweighs these minor flaws.

In August 2004 Entertainment Weekly published a harsh review of Just A Geek titled “Whiner of the Week”. In August 2022, this TrekNews.net correspondent is delighted to inform you that Wil Wheaton’s funny, poignant, well-written annotated memoir Still Just a Geek is the “Winner of the Week” in my book.

Sill Just a Geek is now available on Amazon.