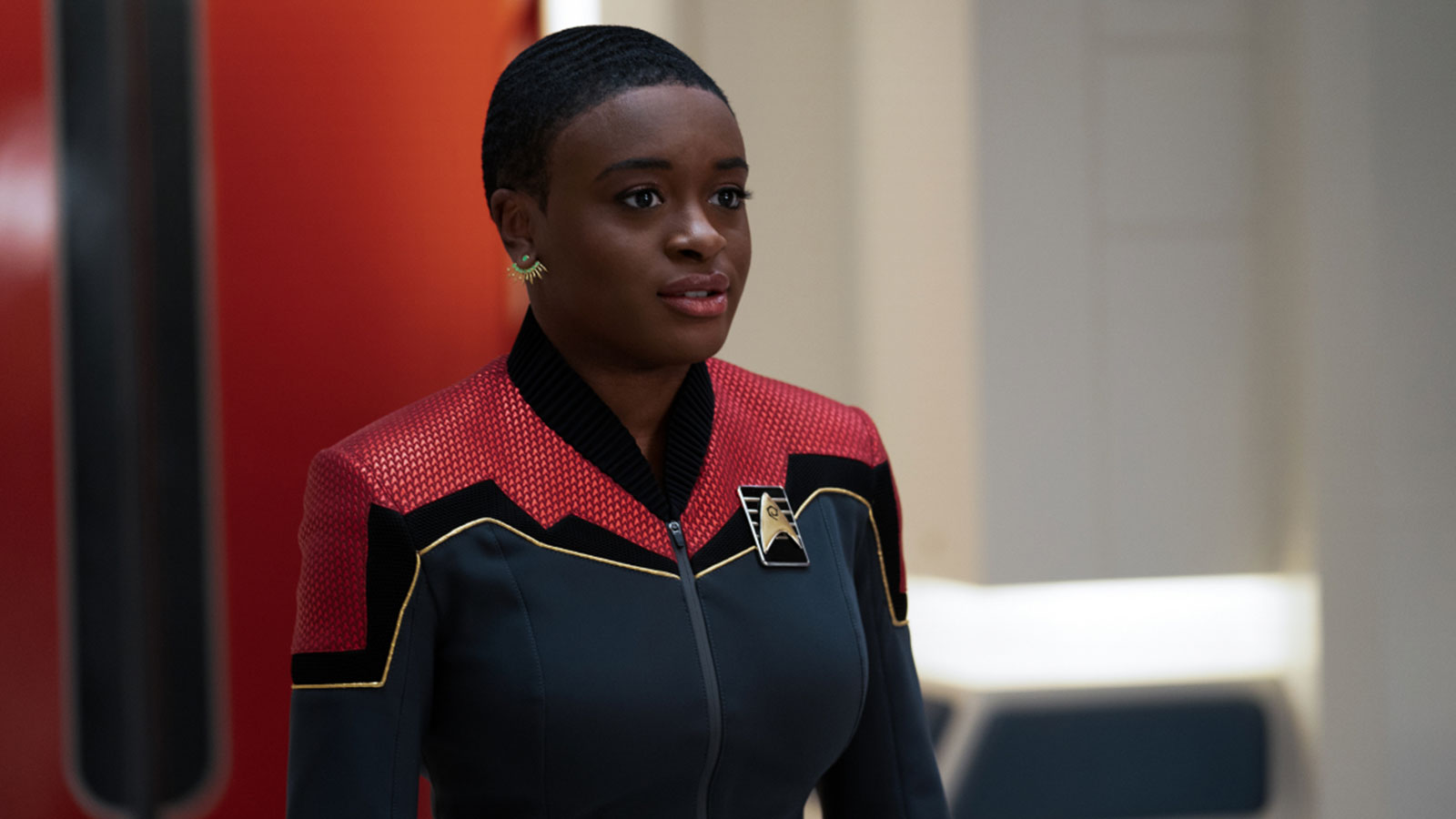 Set within a charmingly wacky sci-fi premise, “Children of the Comet” will likely be remembered for its spotlight on the young Cadet Uhura more than anything else, as we get more backstory for this revived character than at any point in The Original Series.

As she gets settled on the Enterprise, Cadet Nyota Uhura (Celia Rose Gooding) is invited to dinner in the captain’s cabin, a well-attended event that allows her to mingle with, and get playfully hazed by, certain Enterprise officers. Thanks to some prompting by Captain Christopher Pike (Anson Mount), Uhura shares that she is from Kenya, can speak 37 languages – including the 22 languages spoken in Kenya – and that her parents and brother died in a shuttle accident as Uhura was about to attend university. Her grandmother was also in Starfleet, but Uhura has never felt like she belonged anywhere. Already, we feel like we know more about her than we learned in The Original Series.

The backdrop for this dinner is that the Enterprise is tracking a comet that is ultimately on a collision course with a nearby planet, Persephone III. The planet is home to a pre-warp civilization, and millions of people will be killed when the celestial object impacts the planet. Pike and crew resolve to not let that happen, but their task becomes more complicated when the comet appears to have a forcefield surrounding it that prevents its destruction.

Determined to learn more about the forcefield and a mysterious structure on the comet’s surface, Pike deploys an away team consisting of Uhura, Spock (Ethan Peck), Samuel Kirk (Dan Jeannotte), and La’an Noonien-Singh (Christina Chong). The team makes it inside the structure and find a strange, egg-shaped statue of sorts with intricate alien writing. Kirk gets a bit too close and gets majorly zapped by an electrical discharge, leaving him to spend most of the episode flat on his back unconscious (perhaps an unintentionally hilarious peek into how we see the ill-fated character in his sole The Original Series appearance). Moreover, the away team is trapped.

“Do you not think this is an inappropriate time for jokes?”

“It’s like the captain said: ‘sometimes things go so badly, you just have to laugh.’”

Spock and Uhura as they try to escape the comet

With the comet on a collision course with the planet, the away team is running out of time to escape their entrapment. It’s up to Uhura, as green as she is, to decipher the alien language and try to get them out in time to devise a solution to the planet’s imminent destruction. Things are further complicated when an alien ship, appearing from the comet’s debris trail, confronts the Enterprise and orders them to leave. This ship and its crew, self-professed “shepherds” of the comet, are tasked with protecting the comet. They believe it is an ancient arbiter of life and death in the galaxy. To them, the comet decides for itself if it wants to sow destruction or foster life.

Pike doesn’t agree with allowing this comet to kill millions of innocent people, but the Enterprise isn’t a match for the powerful alien ship. Not all is lost, however, as on the comet’s surface Uhura cracks the code to understanding the alien language, with no small assist from Spock and his pep talk. Thanks to her natural inclination for music – which has been somewhat of a defining characteristic for her thanks to TOS episodes like “Charlie X” and “Conscience of the King,” as well as Star Trek V: The Final Frontier – she realizes the code on the egg-shaped object refers to musical harmonics. Using her lovely singing voice, as well as a harmonic assist from Spock, Uhura’s singing communicates to the comet. It lowers its forcefield, thus allowing the away team to beam to safety.

It was around this point in this episode that we thought the plot of “Children of the Comet” would fit nicely in The Original Series or The Animated Series. The idea of a sentient or pseudo-sentient comet that travels the galaxy and communicates via music is pretty wild, in a good way. It’s almost like a plot Arthur C. Clarke could have come up with during an LSD-induced fever dream. Clearly, Strange New Worlds isn’t afraid to embrace the “strange” in its title.

After a brief scuffle with the alien ship, and with the people of Persephone III still at risk, Pike and crew devise a way to fool the alien shepherds into thinking Enterprise is defeated, all while Spock, in a shuttlecraft, skims the surface of the comet and uses the shuttle’s heat shield to break apart the stellar mass. Modifying the comet’s mass via sublimation alters its trajectory and spares the planet – and in fact, the comet’s brush with the planet releases water vapor into the atmosphere of an otherwise barren world. Looks like the comet really was the bringer of life.

This conclusion isn’t as cut-and-dry as it appears, however, as Uhura recognizes the message the comet was trying to send the away team when Uhura was singing to it was that it didn’t mean any harm, to them or the people of Persephone III. Furthermore, by analyzing the comet’s course both before and after Spock was able to melt a chunk of it off, the comet appears to have known of Spock’s attempt to alter its course and prepare as needed – as if it knew what Spock was going to try before he did it. As Uhura summarizes, the comet “knew its fate.” It appears, then, as the Shepherds claim, that the comet really is an arbiter of life and death, and it chose life for this planet no matter what the Enterprise crew did.

This resolution rings true for Pike, who, let’s remember, is facing fate himself. The lesson he takes from the comet is that even if you know your fate, you can still alter it. Una Chin-Riley (Rebecca Romijn) voices this assessment of Pike’s existential crisis, too, and after a conversation between the two friends, Pike decides to learn more about the people he supposedly saves during the incident that claims his life.

Interestingly, Strange New Worlds seems to be setting up an intriguing throughline across this episodic season. We assume that because we see Pike in The Original Series as the wheelchair-bound man he ultimately becomes, this means his fate is indeed sealed. But what if it isn’t? What if his future is what he makes it? It’s a thought Pike understandably wants to explore more. What exactly will he find by researching the people he saves, who at this point are just kids?

More to the point, “Children of the Comet” is an intriguing origin story for Uhura. She clearly grapples with confidence issues (who among us haven’t?), but she is still able to prove her worth to the Enterprise crew by saving the day. Moreover, this episode shows that Uhura initially had doubts about whether Starfleet was the path she wanted to pursue in life and that it was Spock who talked her into staying. What a neat addition to these characters’ dynamic.

In our opinion, leaving the creators of the comet a mystery is a wise move, as it fits within this show’s burgeoning ethos of encountering strange new things in space. But besides the titular alien comet at the heart of the episode, “Children of the Comet” is an excellent entry point for Uhura in Star Trek canon. We see now she was questioning her place in Starfleet, has a tragic past, and her first mission was intense, dangerous, and challenging. Clearly, she goes on to become a legendary Star Trek character (even rising to captain her own ship, as referenced in the Star Trek: Picard season two premiere). In this sense, Uhura as we know her seems to be a child of the comet just as much as the comet’s shepherds were and the people who flourished on Persephone III after the planet received its life-boosting nourishment. We’ll never look at Uhura the same way again, and we think that’s pretty cool.